In a universe overpopulated by 80mm and 100mm ED and apochromatic refractors, few choices exist in the 90mm range.  Most are difficult to obtain or suffer from lengthy backorder status. Still, this size refractor may be just the right option for visual observers and imagers who crave just the right combination of capability, portability, and reasonable cost. The Sharpstar 94EDPH attempts to fill this niche with its 94mm, f/5.5 triplet crafted with two elements of unspecified ED glass, presumably of FPL-51, FCD1 or equivalent.  The “EDPH” tag suggests that the instrument is designed primarily for photography and imaging, but visual use is certainly possible. A dedicated 0.8 focal reducer is an option for imaging applications.

Weighing in at just 9.4 pounds complete with cradle ring, Vixen-style dovetail mounting plate, integrated carrying handle and a Synta-style mounting shoe for a finder, the scope has a retractable dew shield and a beefy dual-speed focuser.    The tube is finished in a lightly pebbled white with accents of metallic ruby red - a very attractive presentation.  The provided carrying case cradles the telescope in rigid, form-fitting material and measures 9x10x21inches, small enough to meet most airline carry-on requirements. Overall fit and finish is good, but the dew cap sags a bit when extended and could profit from some felt shimming.  The rack-and-pinion focuser turns out to be a mixed bag:  It is robust and capable of carrying significant weight, but it's not particularly smooth, with one point in its travel where friction increases by about 30 percent.  The fine focus, however, is very smooth and displays no image shift.  The drawtube is three inches in diameter, calibrated, and has a travel range of just over three inches. The entire unit can be fully rotated to provide optimum position for camera or visual accessories. Standard 2-inch and 1.25 inch backs are provided.

The light weight and short tube length of the 94EDPH make it possible to permit attachment to a variety of relatively small, portable mounts.  I began with a Vixen Portamount with wooden tripod legs replacing the original aluminum trio. The scope was reversed in its cradle to position the finder dovetail in a convenient position, and a 6x30 finder was added. The combination proved to be quite sturdy, yet light in enough to allow easy mobility as a single unit,  excellent for grab-and-go.  Damping time was just about one second. I have no doubt that a CG5/AVX-class equatorial mount would be more than sufficient for excellent stability. The short f/ratio of the telescope prompted the use of a high-quality dielectric mirror star diagonal, and a 1.25” TeleVue Everbrite was attached to the visual back adapter.  Being curious about the effectiveness of a prism diagonal,  I also used a Baader T2 for direct comparison.

The “New scope curse” struck with a vengeance when the 94EDPH arrived in mid-summer, usually a good time for clear skies in Western New York.  A combination of humidity, forest fire smoke, and stubborn clouds called for a terrestrial evaluation.   A conveniently located power pole with its insulators provided a reasonable target. In testing for false color and image sharpness, I used a variety of high-quality eyepieces giving magnifications from 29 to 207x.  Powers up to about 90x showed no trace of chromatic aberration, but 103x did display a very faint blue halo at the edges of the wooden pole and the “artificial star” created by the specular reflection from the insulator.  This effect became more prominent at 207x, but it was still fairly subdued.  Collimation at all magnification was dead-on, and there was no image breakdown even at the highest power. The usual logic of short f/ratio refractors would expect the mirror diagonal to provide a better image than the prism unit. Not so!  The Baader T2 prism generated better color correction, superior image sharpness, and somewhat better snap-to-focus.   This remained true when the scope was turned on celestial objects as well.

When clear skies finally arrived, the convenient location of Saturn and Jupiter created the perfect conditions for evaluating the scope's high-power abilities. Finding a telescope to provide direct A-B comparison was almost impossible.  I've owned two Brandon 94mm triplets in the past and briefly looked through an Astro-Physics 92mm Stowaway, but my Takahashi FC100DC was the only current scope close to the Sharpstar's aperture.  This is, of course, an unfair comparison as the Tak is a world-class f/7.4 fluorite doublet with serious pedigree.

Turning both scopes on Jupiter and Saturn confirmed my initial expectations.  Jupiter displayed a sharp, CA-free disc at 103x in the Sharpstar using a 5mm Paradigm ED eyepiece.  The North Equatorial Belt stood out with its reddish coloration and several minor belts could be seen along with detail in the Equatorial Zone.  The Great Red Spot was visible, and shadow transits of Ganymede and Callisto were fairly distinct.  Pumping the power up to 129x improved the visibility of small details a bit, but 207x added nothing.  I found that the short f/ratio of the scope made for a very narrow plane of best focus, so frequent adjustments were needed. The Takahashi, however, showed a much cleaner image at similar magnifications, considerably better contrast, and a better snap-to-focus.  Satellite transit discs were dead black and color saturation was superior.   No surprise here.

Saturn provided a similar experience.   The 94mm triplet did put up a nice view, with the ringed planet's North Equatorial Belt easily visible and the Cassini Division showing at the ends of the ansae.  It was enough to impress several passers-by, but the Tak was, to be honest, far superior with its razor-sharp definition and stark contrast. Though the images generated by the Sharpstar were by no means bad, its short f/ratio conspires against it for optimum planetary viewing.  A longer focal ratio, high-quality 100mm ED would be a better choice where planetary viewing is a priority.

The moon was observed in phases ranging from thin waxing crescent through full.  Detail was sharp and color free with crater and mountain shadows genuine black with no hint of bluish wash.  The lunar Alps, Alpine Valley, Straight Wall and small rills stood out with clarity at powers up to 129x. Boosting the magnification to 207x at gibbous and full phases did, however, show a slight blue line around the limb, but the image did remain sharp.  Again, as well as the Sharpstar performed, the Takahashi was clearly superior with its superb definition, “pen-and-ink” contrast, and almost 3-D image rendition. Credit that to greater aperture and better optical quality.

The Sharpstar did put up some very good double star views and met the expected theoretical limits in resolution for its aperture. Epsilon Lyrae was cleanly resolved at 103 and 129x, displaying tight airy discs and fairly subdued first diffraction rings.  The stars were almost pure white at these powers, but a slightly yellowish tinge crept in at 207x. Ras Algethi, Iota Cass, and Izar were all resolved without difficulty, but Delta Cygni with its close, faint companion proved more of a challenge.  The cleaner image in the Tak FC100 made the split much easier. Albireo and Eta Cass were quite nice in the EDPH as their colors were rendered with true fidelity. Overall, the Sharpstar is a good performer on multiple stars, falling behind premium scopes in its aperture range by a bit.

Deep-sky observations with the 94mm showed the little triplet punching well above its weight in providing some very impressive images.  As a wide-field sweeper operating at 21x with a 25mm Paradigm ED in the drawtube, the scope was superb at scanning the rich star clouds of Cygnus, Aquila, and Sagittarius.  Stars were rendered as sharp pinpoints, and field curvature was acceptable.  A 19mm TeleVue Panoptic worked beautifully as well. The 94mm aperture was just enough to allow the use of an oxygen III filter to coax out detail in brighter diffuse nebulae.  At 26x with the latest generation Lumicon filter in place, M8 (the Lagoon) and M17 (the Omega) were quite striking, and the Dumbbell exhibited its faint extensions. Globular cluster M22 was well resolved at 74x with a TMB/Burgess 7mm eyepiece, and M13 was at least partially resolved at that power. Open clusters were particularly nice at magnifications between 43 and 52x, the Double Cluster in Perseus giving the sought after “diamonds on black velvet“ appearance, and more subtle objects M23 and Caroline's Rose (NGC 7789) providing a tantalizing view.

Being a strictly visual observer, I can't accurately assess the Sharpstar's photo and imaging potential. A seasoned imager would need to pronounce judgment.  [My only experience was decades ago with a camera that used MS/DOS software!]  The good, but not perfect, color correction indicates solid potential, but I have no clue as to what effect the 0.8 focal reducer might have.

The Sharpstar 94EDPH turns out to be a competent instrument and a good value for its $1495 asking price.  It's a very good deep-sky telescope, is airline portable, and is, in all probability, a good choice for imagers, the 0.8 focal reducer yielding a fast optical system. As to the consistency of the optics and quality control, a sample of one has little statistical validity. My particular scope might be better than average (or worse), and the QC checklist from Sharpstar failed to catch the balky focuser and sagging dew cap.  [Agena Astro, the primary U.S. source, will perform an additional check if requested at no charge.] Where the telescope falls down a bit is in its somewhat compromised planetary views and mediocre focuser.  It can't compete with truly high-end scopes from Astro-Physics, Takahashi, and a few other premium refractors, but in its size and price category, there are few alternatives.

Thanks for the review Larry! I actually recently purchased one of these along with the focal reducer in order to try my hand at imaging as well as to have a [far] more portable scope than an 8" dob haha. I'm very much looking forward to the views .. if only the skies would cooperate.

Nice review. Id like to hear more about the focuser. I hsve a 76edph and the focuser is amazing, way better than my old moonlite. Maybe the 94 uses a different design. 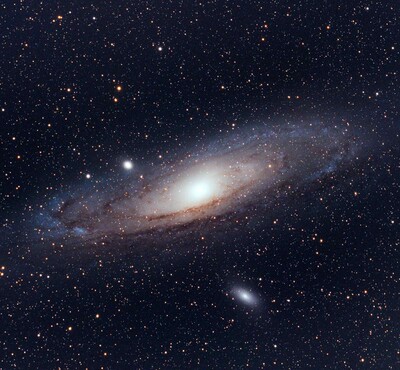 If I did not own four telescopes already I think this scope and its size and features would be the way to go. My senior age 75 years makes my large 13"Dobsen less used and hard to transport around, my Original Edmund 3" reflector is just too small , I find my 4" refractor is a (Edmund) with rebuilt drive  a convenient size , to use and transport around and I think the reviewed scope would be likewise. No I'm not selling my big Dobson, and yes this is a nice review. Nate Goodman (Nato). Salt Lake , Utah.

Thanks for the well written review! Sounds promising

Thank you for the comparison of two refractors, one with a f/5.5 and the other with a f/7.5 focal ratio. It appears that subtle chromatic aberration does rob a little contrast from the visual views and the focus plane is more forgiving in the longer focal ratio telescope.

I appreciate your reviews very much.