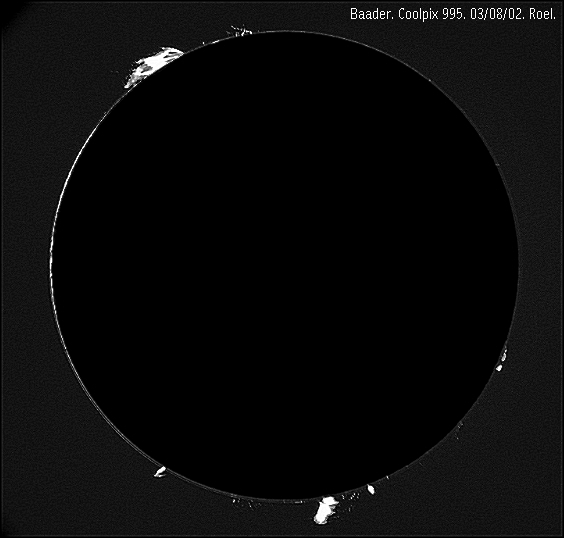 A little about my Solar Observatory.

The main instrument is an 6" f/12 Astro- Physics Triplet "Superplanetary" refractor, built with the NASA glass. This superb refractor telescope was given to me as a gift by Joseph. H.C. Liu, a well known Chinese astrophotographer and friend. It is mounted on an equatorial HGM-200 Losmandy with the Gemini system.

By that time (circa 1998), I already owned two glass filters of 6" in diameter, an Orion and an Thousand Oaks, and also an old 4" Optron that veterans in this hobby should remember. The Orion I believe is made by J.M.B. and is superior hands down against my particular ones, aside of giving a more pleasant Solar color.

Soon, I bought the Baader AstroSolar film filter and built myself a full size cardboard cell and found it an improvement over the other three filters. I also owned since 1990, an 0.5A DayStar T- scanner H alpha filter with two energy rejection filters (E.R.F), of 60mm. and 50mm in diameter. As a matter of fact, a few weeks ago I sent the T-scanner to Del Woods (DayStar), to change the aged blocking filters. (They get degraded).

About a year ago, I bought from this incredible artesian and human being, an 0.45A ATM. filter with an 5.1" aperture ERF., The filter performs superbly at the observatory's altitude of 2190 meters above sea level.

The normally good day seeing, made me decide to buy from Mister Thomas Baader two more solar accessories; a Herschel wedge built around a Zeiss prism, and the Mark-IV Coronagraph.

As for the Herschel wedge, well I must confess that after receiving it I have never used again my other filters, not even the one made with the Baader film. The vistas that the wedge delivers are incredibly crisp and contrasty. The neutral filters that come with the "Herschel Prisma" are at least ¼ wave flat. The Herschel itself is a work of art. All the hand set screws hold the eyepieces or the heavy CCD or 35mm cameras easily and with no wobble, you just have to tighten lightly to keep them secure, an eerie feel.

All the parts have an incredible perfect fit. I am thinking of buying more screws to improve my other brand accessories. By installing another screw at 60 degrees of the original, you won't believe how secure and rock solid your cameras and eyepieces will be.

A year ago, I bought from Meade a brand new 4" f/9 (102mm) Achromat for $199.00. This oriental (Taiwan) refractor gives very nice, sharp images. The chromatic aberration in this nice little scope is barely noticeable and not objectionable at all, even when observing the Moon and bright stars. Aside from that, I did not care because I wanted it exclusively for the Coronograph and as you probably know, the H alpha line (656.3nm.) is monochromatic. Consequently, won't need to get an expensive apochromatic refractor to get a good image. Just a well made and smooth objective with none or little spherical aberration and of a given focal length.

After a long while and having already mounted the 4" f/9 Meade achromatic refractor piggy back on the 6" A-P f/12 main telescope, Mister Baader sent me from Germany last April the two jewels, the Herschel wedge and the Mark- IV Coronagraph. The Coronagraph came in a small plastic brief case with foam cut spaces for all the components. I was impressed by the Coronagraph's light weight and craftsmanship, including the Excenter and the 90 degree Prism. It comes in 3 parts:

At first before buying it, I saw some photographs of the system and was worried because I thought it would bend the draw tube of the 4" f/9 achromatic refractor. So before I received the Coronagraph I took the focuser of the 4" f/9 achromatic refractor apart, and drilled 4 small holes at 60 degrees of the tightening screw of the focuser, precisely where the three Teflon spacers are glued. Two holes in the back and 2 holes on the front on the lower part of the focuser casting. Then I threaded the holes and screwed small pieces of Nylon set screws about 3/16" long that I cut from a 2" long screw. I sawed a groove on one side of each set screw using a jewelers saw, and as you probably guessed, using a fine screwdriver I can tighten or loosen the set screws that push on the Teflon spacers to adjust the draw tube of the focuser to take all the slop and play out. This made my focuser extra stable and with no wobble at all and gained the ability to adjust the draw tube to the optical axis..

Francisco Mandujano, president of the Mexican Astronomical Society, a good friend of mine and a very keen and daily solar observer, also bought at the same time exactly the same setup. He did not modify the focuser on his Meade 4" f/9 refractor. He tells me that there is no flexure of the draw tube with the Coronograph and camera mounted. That speaks for the light weight of the apparatus, and probably too for the sturdy construction of the cast focuser.

Mister Baader sent us the threaded adapters to connect the Coronagraphs to the draw tubes of the 4" f/9 refractors. Before that, he asked us for the exact inside diameter and the pitch of the thread of the draw tubes as he had to custom make them for our scopes. He did not know how the focusers of these Meade refractors were made. He had adapters in stock but just for the Celestron and the Vixen 80mm and 90mm refractors.

He also asked for the focal length of the refractor to the nearest possible millimeter. We sent the number engraved in the objective's cell, it says 920 mm. The instruction manual is straight forward, though it has some grammatical errors due the translation from German to English.

After reading its 7 pages written on both sides, most of them drawings and layouts of the system and also the Spectrophotometric test report on the H. alpha filter, stating the Measured Center Wave Length, the Corrected Center Wave Length, the Measured Half Power Band Width and the Corrected Half Power Band Width, I found what the cotton gloves, the tweezers and the bullet like parts placed in a plastic case, were for.

The 6 bullet like items, are the occulting cones or discs. They occult the solar disc as when the Moon occults the Sun in a total solar eclipse but that's not all. We have to remember, that our Sun is not always at the same distance from us, so Mister Baader sends 6 cones to compensate for its different apparent diameters during the year. So for instance in August one has to use cone number IV, designed for April./May and August /September.

You have to screw the cone to a tack that slides in a Teflon socket installed in the middle of the relay lens, so to focus the cone sharply on the eyepiece. Use the tweezers and gloves provided because the cones are made of highly polished stainless steel and then coated with an aluminum and quartz overcoat. We have to take into account that this part is placed at the exact focus of the Sun. By the way, have you ever tried to put your hand or finger where the Sun focuses? You won't like it, it burns you quickly, so think to what this little cone is subjected to, therefore it has to be clean and shinny to reflect most of the heat it receives.

The main body of the Coronograph holds the relay lens with the cone, the Iris, the projection lens and the H alpha filter with its tilt mechanism. All five parts are modular and screw one to each other.

The projection lens that comes with the system introduces a factor of 1.5 X to the focal length of your original Objective. So my 920mm focal length refractor becomes an 1380mm telescope with an f ratio of 13.52 to be exact. It gives a Solar disk of approximately 15mm in diameter on a 35mm film emulsion. 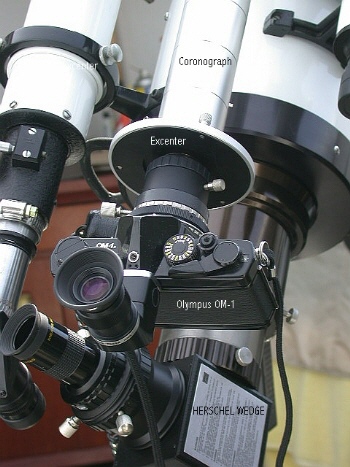 Baader also sells a more powerful projection lens with a basic factor of 2X. This can be used together with a Teleconverter to easily get a 4X increase of image size, or use it with a Binocular Viewer.

For this high power observing, imaging or photographing, the Excenter setup works wonders. You can move your eyepiece and or camera around the solar rim to find and center the section of interest, a really nice item that works very easy and smoothly.

Baader also sent a copy of the review made by S&T in the June's 1994 issue, by the well known Solar photographer and observer Donald F.Trombino. I have to admit that every word said by him is basically correct. However, the newer version of the Coronograph with an 1.5A H. alpha filter with tilt mechanism, is far better than the one he had at hand that sported just a fixed 11 A, H alpha band pass filter. Looking through one of this instruments is really a breathtaking experience, that brings you closer to the feel of a "Total Solar Eclipse"
.
Now lets get to the normal operation of this accessory after adjusting and installing it on a given refractor of up to 102 mm aperture, it is as easy as this: 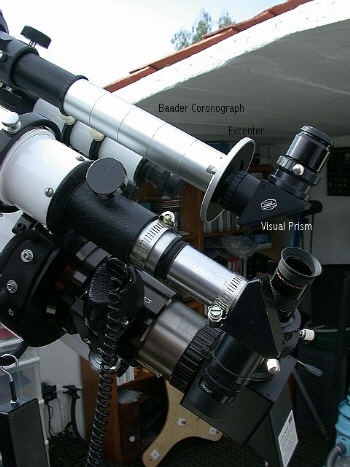 As you can see, it is that easy and that nice but not so cheap. I must say, that the system is worth every penny it costs as do all Baader accessories, not to mention the Herschel wedge that deserves a sole review.

I liked so much the Baader products, that I even got the superb Moon & Skyglow filter and the 30mm Eudiascopic (modified Plössl) eyepiece (made by Canton), that blows away my 32 mm Brandon, 32mm.TV., 25mm. and 26mm. Meade's and the 28mm Williams Plössl`s. Once you are through observing, just unscrew all the parts and put them in their briefcase until next opportunity. This is an accessory that you will keep on thinking of using every next day.

I have observed through many brands of H alpha filters and this one is different. It will complement any H alpha filter you already have. I love my DayStar filters and think they are still the best nowadays. However, I must say, that now I can not live without this little jewel that gives you an overall and incredibly sharp, contrasty and bright glimpse at the Sun's majestic protuberances.

P.S. Astro-Physics, is the U.S.A. distributor of Baader fine products, though I have not seen these two Solar accessories advertised.