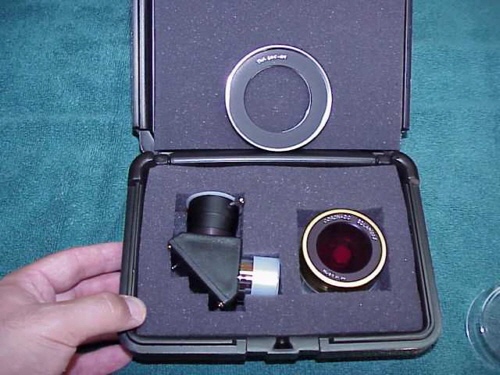 When I heard about the new Solarmax H-alpha filter from Coronado I was a bit skeptical. 40mm aperture, modestly priced, sub-angstrom performance, sounded too good to be true? Well, I am a solar nut, having owned several h-alpha filters over the years, and familiar with Coronado Instruments Group's (CIG) AS series filters, I could not wait to get my hands on a Solarmax to evaluate.

Thanks to my dealer, ASTRONOMICS in Norman, OK I took delivery of Solarmax #26 on Friday 7/27/2001. I hurried home that afternoon hoping to try her out even though the temperature was in the high 90s and extremely humid. Welcome to summer in the Deep South! 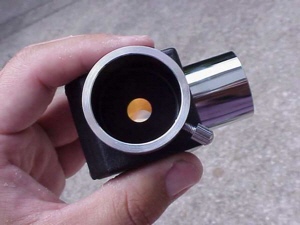 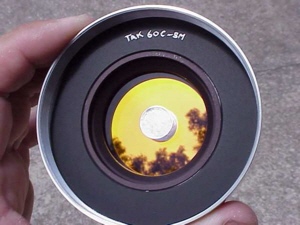 I opened the package to find a small Platt case containing the Solarmax narrowband element, and the 1 ¼ diagonal containing the blocking filter. The instructions are on a single laminated card, and included with the warranty card was a note from CIG President Gerry Hogan stating that the included adapter for my Takahashi FS60C was temporary and the final version would arrive in a few days. The note also said that the production of the Solarmax was the largest production run in history for a Fabray-Perot etalon filter, and they (CIG) appreciated everyone's patience. I can only imagine the difficulty in producing this complex filter in such a large quantity. I hurriedly assembled my Teegul Sky Patrol mount, and headed outside.

The adapter for my FS60C threaded on the scope in place of the dewshade. It was painted flat black on the side facing the objective to reduce reflection, and the out side was smooth and unpainted, and did not appear to be anodized. The machining looked OK, just not finished out. I am sure the replacement adapter will be better. The Narrowband element was gold anodized, and beautifully finished. It was in its on plastic case inside of the Platt case. The diagonal / blocker to my surprise did not have a tilting mechanism like the prom-15 blocker and BF30 used on the other AS series filters. For those not familiar with the AS filters here is a very condensed description. The narrowband element is mounted with a custom adapter afocally in front on the telescope objective or corrector. It is thermally stable, and does not require electricity to heat the etalon making it very portable and convenient to use. Because it is mounted afocally it does not require a high focal ratio for proper contrast. The blocking filter is housed in a 1 ¼ diagonal. On the other AS blockers there is a tilting mechanism that allows you to tilt the blocker to optimize the contrast. It is a broad adjustment with a large sweetspot. Apparently the folks at CIG found a way to make the adjustment unnecessary, which may have simplified production and helped reduce cost. 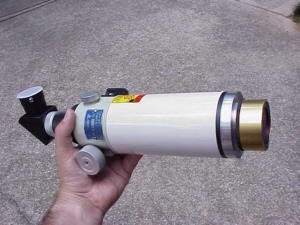 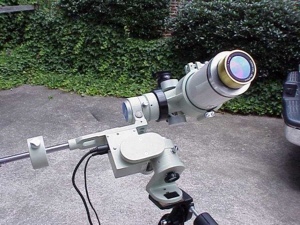 I removed the Tak dewshade and replaced it with the adapter plate. I then threaded the Solarmax narrowband element onto the plate, attached the blocker and started with a 19mm Panoptic. The FS60C is a 60mm f 5.9 fluorite doublet that is a perfect mate to the Solarmax. Talk about a compact H-alpha setup! Did I say this thing is small? It's tiny! With great anticipation I aimed the scope using the telescope shadow, and after sweeping around a bit found the sun. With the 19mm eyepiece the magnification is only 18x and once the disc was in focus I was able to see several very bright prominances, a couple of nice filaments on the disc, and much to my surprise nice surface mottling across the solar disc. The amount of detail was surprising! The bandwidth specified as <8 angstrom and from my experience compared well to .7 views I have seen.

There was considerable ghosting around the disc which is not uncommon with the AS filters. I noticed that the front ERF on the narrowband element is tilted slightly to help place most of the refection off axis but at this low power is was very evident, and I had to be careful how I placed my eye to avoid the distracting reflections. I also noticed that there is another solar disc reflected several fields away and could cause some consternation to the new observer. There will be no doubt when you hit the real target believe me! Unfortunately, I was not able to bring another eyepiece into focus. I tried the 12mm T4 Nag, 12mm Ultima, 8mm Radian, etc. Close, but no cigar. I retrieved my trusty Takahashi Extender-Q which is a five-element 1.6x extender that has a segmented tube. I was able to use the extender-q in the shortest configuration to bring all of my eyepieces into focus.

The 12mm Nagler working at 47x showed a full disc with nice balance of prominence and disc detail. The reflections were almost completely gone leaving a nice black background. There was one huge spectacular fountain prominence faintly visible. By using a head cover it was much improved. I must be crazy looking through a telescope under a cloth in near 100-degree heat. The things I do for science :-)

Moving up to the 8mm Radian things began to get dim requiring some kind of shade or cloth to see the prominances. At 71x the disc showed filaments, a couple of sunspots, mottling, and several of the brighter prominances. The huge fountain was to dim to observe. The view was still quite crisp and impressive. I decided to try the 4mm Radian and as expected the proms were gone but the disc was still fairly crisp and showed chromospheric detail. By now I am dehydrated and about to overheat. I called it a day and went inside to the cool AC,

The next day I set up the Solarmax next to my DayStar 0.4-angstrom University filter mounted on my Tak FS 128. I know it's not fair to compare 128mm to 40mm, but I had a great time spending the day watching the H-alpha detail change minute by minute. The Solarmax seemed to perform the best with the 12mm Nagler. It seemed to give the best balance of disc size vs. brightness and visible detail. The detail was consistent and the non-adjustable blocker was not an issue.

I enthusiastically recommend the Solarmax and believe Coronado is to be congratulated for producing a safe, high quality, sub-angstrom filter at an affordable price. Once people out there start seeing our fascinating sun in the red light of hydrogen alpha there will be many "converts." H-alpha observing is rewarding, exciting and best of all fun! Did I say it is also addicting? Along with the FS60c and Teegul mount, the Solarmax gives me the ultimate portable setup for quick views or traveling.

I think Coronado should place a warning label on the Solarmax that reads:

WARNING! USE OF THE SOLARMAX CAN BE HABIT FORMING. USE AT YOUR OWN RISK.

As an entry-level filter system or ultra portable setup the Solarmax certainly fits the bill. Kudos to the crew at CIG.

The above comments are strictly my opinion, and I wish you clear skies and sunny days,
Doug Finch