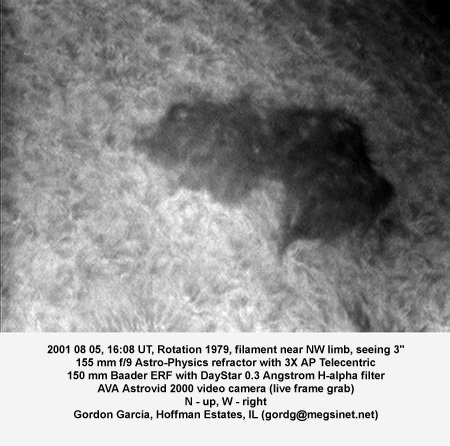 Recently Del Woods (DayStar Filters) sent me a 0.3 Angstrom ATM H-alpha filter to try. It is a prototype filter that is a narrower bandpass than the normally available DayStar line of filters to date. The filter stack is housed in the same style filter oven as both the University and normal ATM series using a 12 watt oven at 115 volts AC to keep the filter on band at 6562.8 Angstroms. The filter oven is 3 inches in diameter and 2 inches in length. The clear aperture of the filter is
32 mm. The Energy Rejection Filter (ERF) can be up to 150 mm (largest RG610 Schott glass blank is approximately 165 mm) provided that at least an f/30 beam is provided through the filter. The ERF blocks about 80 percent of incoming light including ultra-violet. Long-term exposure to ultra-violet radiation can bleach the filter, blue-shifting it so that it no longer can isolate the H- alpha spectral line. This particular prototype filter utilizes an enhanced infra-red blocking filter coating that adds to the optical density on the long side of the H-alpha line. This enhanced coating is a new addition to the filter that will hopefully eliminate the need to replace the blocking filters over time.

I use a two inch front stem on a flat mounting plate for my refractor. I also use a T-threaded adapter on the rear flat plate to accept a Celestron visual back. The filter also uses the same control knob pot as the University and standard ATM filters. The on band setting was listed as 5.0 AC. There were no details as to the operating temperature. I suspect it is in the normal range of approximately 45 to 48 degrees Centigrade. This filter because of its very narrow bandpass is mainly designed for visual, video or CCD use. 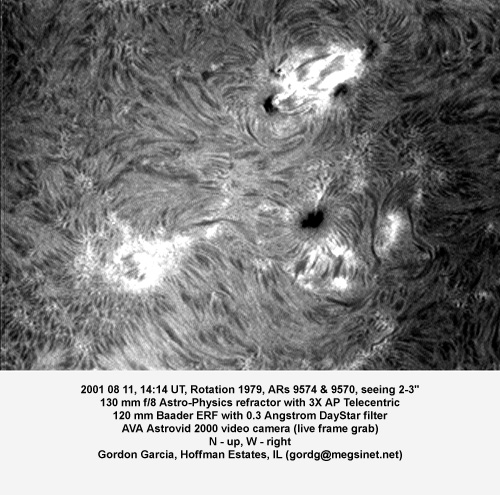 The uniformity across this filter, although good, is not as good as my 0.56 Angstrom University grade filter. The uniformity determines whether the filter is sold as a University or ATM model. A good test is to photograph the whole disk filling as much of the frame as possible using Technical Pan 2415 film and D-19 developer. D-19 is a very high contrast developer and will show any areas where the bandpass varies. Seeing, transparency and temperature may also effect the uniformity and the passband so several photographs as well as rotating the filter are necessary to draw any conclusions. Visually to check the filter move the telescope back and forth in right ascension and up and down in declination using the darkness of a filament (when placed at the center of the field) to gage the uniformity. Also, while holding the filter oven and eyepiece, rotate the filter oven. Be very careful not to drop the filter oven. Make sure it is firmly attached to the rear of your telescope before resuming your observing run. 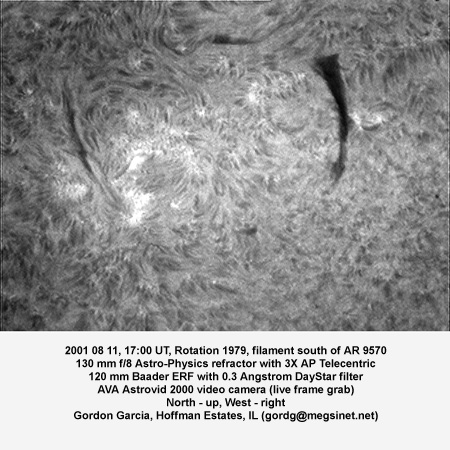 My first full observing sessions with the filter were on successive weekends (August 4, 5 and August 11, 2001). On August 4th, after allowing a brief warmup period, I began photographing the disk in H-alpha using Technical Pan 2415 film. I took a series of filtergrams with my OM1 camera and 130 mm f/8 Astro-Physics Starfire EDT refractor and DayStar barlow with 63 mm ERF. I developed the negatives using D19 (stock solution) for four minutes a 68 degrees F. The filter does show it is not as uniform as my University grade filter and dodging and burning would be necessary, as with an ATM series filter, to produce a uniform image of the Sun's whole disk. I found that a 1/15 second exposure gave the best results. A 1/30 second exposure also looked acceptable although not quite as good. A 1/60 second exposure is clearly underexposed. An exposure of at least a 1/4 second would be needed to capture solar prominences.

The following day, August 5th, I set up my 155 mm f/9 Astro-Physics Star ED refractor using a 150 mm Baader ERF and Astro-Physics Telecentric system (3X) and took a series of frame grabs using my Adirondack Video Astronomy Astrovid 2000 video camera and MRT VideoPort Professional PCMCIA frame grabber. I have included some of these images with this article. With the Telecentric system I had the camera shutter speed set at a 1/60 second exposure rate. This is the slowest shutter speed that the camera will accommodate. At this shutter speed a slight increase in the gain of the camera was needed for the proper histogram reading (exposure). I also tried some images using the 4X TeleVue Powermate. This system works quite well with my 0.56 Angstrom filter. With this 0.24 Angstrom I had to turn up the gain more resulting in a "noisier" image. To get what I would consider an acceptable final image one should stack several frames to average out the noise with this barlow. 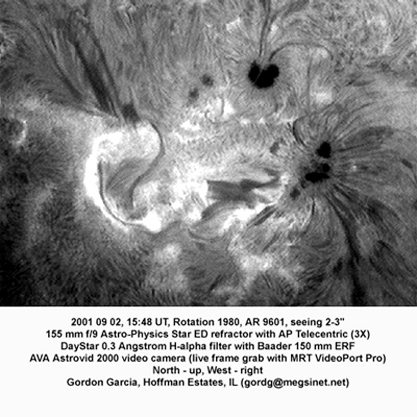 On August 11, 2001, I began observing visually using a Zeiss 34 mm Orthoscopic eyepiece (60x). The quiet region filament to the south of AR's (the largest regions on the disk) was inky black showing a three dimensional look as were most filaments on the disk. Fibrils surrounding the active regions were also black with the reddish-golden Sun glowing below. Prominences along the limb were still easily visible. I was using a head cover, as the disk at this very narrow bandpass is fairly dim. A head cover definitely helps. Plage associated with active regions is very bright. I have not seen disk contrast this good in any other filter H-alpha filter I've observed through. Visually this filter is very impressive indeed. I followed the visual observing session with some frame grabs using the Astrovid 2000 and MRT VideoPort frame grabber with the Astro-Physics Telecentric system and 120 mm Baader ERF. Some of these images are also attached.

My initial thoughts are that this is the best possible solar filter for visual observation of the Sun in H-alpha. The image is fairly dim, but the contrast is superb. The filter can also easily be used for video or CCD work. Initial results indicate that this filter with the Astro-Physics Telecentric system is excellent for high resolution imaging. Using the filter for 35 mm film work with Technical Pan 2415 film will a bit more challenging given the slower shutter speeds and non- uniformity of the filter. Del Woods indicated that he has produced a more uniform filter already (I received the first prototype). Also, using the filter with a slower photographic system such as the TeleVue 4X Powermate you will find imaging more challenging again due to slower shutter speeds. Because of its very narrow bandpass, it can be used visually for prominence work or with a CCD or video camera that has a shutter speed slower than 1/60 of a second. Those wishing to do serious prominence studies would opt for a very wide bandpass such as a coronagraph and use this filter for imaging disk details.