Lately I've been enjoying my 3rd Daystar filter. My first a .6ATM, second was a .5 ATM, my third a .45 University. Since I began into this long road of astronomical equipment, I always wanted an H Alpha filter. It finally happened, and now I'm sold on Solar.

Basically, viewing the sun is like the moon. Its an easy target, only its different every day.

Prominence is the outbursts you see on the disks edge in all the pictures They can come and go pretty fast. I recently seen an animation taken by a person on the yahoo solar group taken the same day I viewed the sun, only I was too late to see what he seen. It started on the limb, and shot out into space in about 30 minutes. Prominence can be seen very well in my .45 although a .8 or 9 would be better.

I was fortunate enough to be able to test between two filters of the same Bandpass. One had one polarizing filter, the other had two. The one with the single polarizing filter was a lot brighter, and matched the other when I added a green, or red filter. I kept the brighter one.

Other features are filaments (prominence when viewed on the front of the disk rather than the edge). These are great to look at when they're toward the edge and you can actually see the filament turning into a prominence.

Sunspots appear totally different in H Alpha, and there is a need for white light observing to go with H Alpha viewing. The sun is very active in H Alpha. I prefer full disk viewing. Its basically the same apparent size as the moon. The disk appears blood red, and fits into an eyepiece field as does the moon.

Since the daystar filter needs to heat up before use Ill usually take a quick look to see the sunspot activity then let it set until it comes on band. I usually give it 10 to 15 minutes. Its definitely good to go by then.

Not an easy task, but not too difficult either. ( Does that make any sense at all? )

Its fairly easy to image the sun, but difficult to make the image as presentable as would be at the eyepiece. I've had a little luck imaging full disk, but don't think this is what the sun looks like at the eyepiece. Every filter I've had from Daystar has been onband to the edges other than one, which I could still get the full disk onband. ATMs aren't guaranteed to be either.

People sometimes get confused with what you need to use a Daystar. Its simple. The ERF goes on front of the scope. Its purpose is to mask down the scope, and keep down heat levels. The good thing about a Daystar is you're not limited to really small aperture with refractors.

The Daystar filter goes behind the scope, before the eyepiece/camera. This is where the wedge comes in. The wedges, or plate is just a thin plate between the filter and barrel/ SCT threads, with a slight tilt. If using a refractor you'll need a flat plate (rather than wedge), so the light comes into the filter straight. If you're using a SCT design you'll need a wedge that tilts the filter to accept the light as it comes from your off axis scope. You'll just specify the scope you'll be using. I went ahead and bought a wedge for f10, f15, and a flat plate for refractor since I change scopes so much. For the filter to work correct you must be at f30, or slower. This is done by matching your scope with an ERF (energy rejection filter ), and using barlows when necessary.

Here's an example how to figure up a set up. 'Ill use an FS78 refractor. Normally 630mm focal length at f8.

Needless to say short focal lengths require barlows. Its best to at least use 60mm ERF or more.

So, everyone has one.

Well, Coronado filters is the competitor with Daystar. Coronado filters become increasingly expensive as you increase size, and are limited to small aperture (140mm and below) . However, if you want to use small aperture scopes they may be better for your needs. As for me Ill stick to Daystar, not so much as they're are 10x better, but I'm broke and poor! To me it seems like Daystar is the better buy. Remember aperture, and bandpass. Coronado doesn't offer a .45 I don't believe. You probably wouldn't want to pay for it if they did. 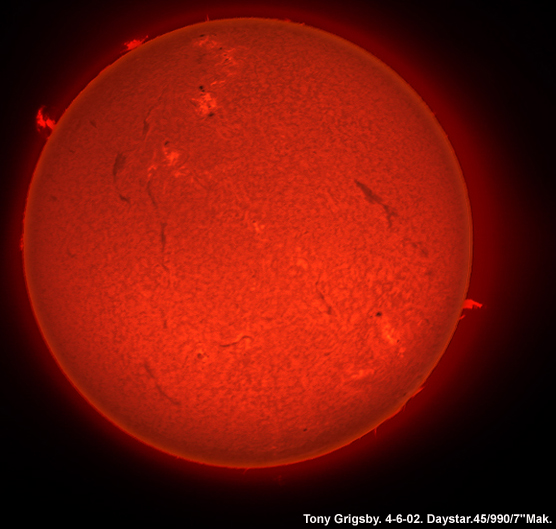 I've just recently got back into solar imaging, so here's a full disk picture using a Daystar. The image was taken with a Nikon 990 in front of a 40mm Pentax on my 7" Maksutov 63mm prefilter. It doesn't match the eyepiece view, but gives the idea.