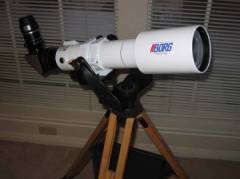 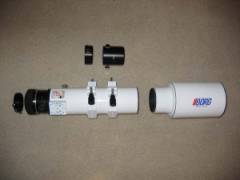 Reviewed by Richard Perrella
My search for the perfect backyard telescope began nearly three years ago. I wanted a low-maintenance, lightweight, compact telescope with high-quality optics capable of great wide-field and planetary views, all at a reasonable price. I also wanted more aperture than my Meade ETX-90.

The criteria pushed me toward one model, a Borg 100 ED refractor. I made my purchase from Astro Hutech in time for the great Mars opposition of 2003. Separately, I bought a Televue Panoramic alt-az mount and a WO 2-inch enhanced aluminum diagonal. The combination has performed up to my expectations and the Borg has proven to be a high quality grab-and-go scope. So, is it the perfect backyard scope: Well, not quite perfect, but I'll get to those details.

The Borg 100 ED was purchased as an OTA, but can also be bought by choosing from a dizzying array of separate components. The components are of sturdy aluminum construction and screw together. For travel, the components can be easily removed and the entire OTA can be carried in one small travel bag. The objective component has a built-in sliding hood and comes with its own padded vinyl bag. The supplied helical focuser is large and smooth and has about 20 mm of range. A draw tube allows the user to greatly extend the focus range. The entire OTA weighs just over 5 lbs and fits perfectly on the Televue Panoramic mount.

One problem with the OTA package is that it is designed for those who prefer a straight-through view. Since I wanted to attach a 2-inch diagonal, I realized that the shortest 2-inch holder supplied was not short enough to reach focus. Thus, I had to place a second order for Borg's 2-inch 7501 SSII eyepiece holder. With the new holder, all of my eyepieces were able to reach focus.

While the standard focuser was smooth, when I attached the 2-inch diagonal and heavier eyepieces such as the Pentax LX series, the focuser started to bind slightly. At high powers using the alt-az mount, it was too easy to accidentally shift the aim of the telescope when trying to focus. A better choice with heavy eyepieces would be the heavy-duty MDX focuser or the Feather Touch. 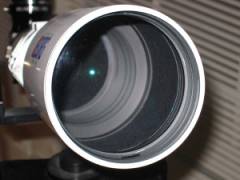 The lens is a 640 mm f.l. doublet with one element made of extra-low dispersion glass. The green multi-coatings appear very adequate, and in use, objects viewed exhibit good contrast and are free of glare. The Pentax 40 mm XL 2-inch eyepiece provides 16X and a field of view of over 4 degrees, good enough to use as a finder scope or to take in spectacular views of the Milky Way. The power can be pushed to at least 180X without any image softening.

The telescope is billed as an APO, although I was expecting to see some false color given that it is only an ED doublet. To my surprise, I haven't seen any false color on the Moon, Jupiter, Saturn, Mars, or most other bright objects. Only Vega and Venus have shown a hint of blue and red on the edges, and at least some of that color is likely due to atmospheric dispersion, the eyepieces, or my thick eyeglasses.

The telescope arrived out of collimation. Given the number of user comments I found on-line, this doesn't appear to be an uncommon situation. Since Borg telescopes are collimated before shipping, it is likely that jarring during shipment knocked it out of collimation. Luckily, the objective lens can be easily collimated by the user in the field by adjusting four hex screws, following simple instructions supplied by Astro Hutech.

Despite the simple instructions, I had some difficulty finding the collimation sweet spot. The pattern of the diffraction rings seemed to be impacted by the smallest adjustments of the hex screws. Also, finding the balance between screws that are too loose or too tight can be a challenge. Just when I thought I got it right, cold weather would cause pinched optics (too tight) or transportation of the scope would cause it to lose collimation (too loose). However, once you get a pretty good adjustment, you don't have to fool with it very often. In the end, I've settled for a star test that is close, but not perfect, with a tiny amount of pinching in cold weather.

Using a test for spherical aberration reported in the April, 2004 issue of Sky and Telescope magazine, the lens is corrected to about : wave. The test method involved measuring the focus shift between the central 50% of the lens and the outer 50% of the lens (using masks to alternately cover the outer and inner portions of the lens). Since I was looking for very tiny focus differences, the test had to be repeated many times to get meaningful results. I've learned that my own eyes can't really detect better than : wave.

Okay, now we get to the good part. I've thoroughly enjoyed the views with this telescope and plan on keeping it for many years to come. I've most enjoyed the reactions of friends, family, and complete strangers as they viewed jaw-dropping sights with this scope.

Moon : This scope was made for the Moon. Using the Pentax 7 mm XL and a Barlow lens, the high-power views were spectacular and detailed beyond belief. The Apennine Mountains were so sharp and detailed, you almost thought you could drop down to the surface, don some climbing gear, and explore the region. Craters had distinct edges, with ripples down to deep floors. Rilles and maria also provided endless hours of fascinating viewing. I haven't seen a hint of false color in any of the high-contrast views.

Planets : Even on nights of average seeing conditions, Jupiter always showed at least four bands, with more bands and swirls on nights of good seeing. In comparison, the ETX often showed only the main two bands under average seeing conditions. The rim of the planet in the Borg was sharp with the four main moons dancing around the globe. On Saturn, the disk was sharp with subtle shading on the surface. The Cassini division was always visible in the rings. During the 2003 opposition of Mars, the southern polar cap stood out clearly, looking almost three-dimensional. During the 2005 opposition of Mars, the dark surface features stood out more clearly than in 2003, mainly due to the planet riding much higher in the sky.

Deep Sky Objects : I have viewed a wide variety of deep sky object with this scope, but some of the most spectacular sights were of open star clusters, especially at low to mid powers. My favorites included Pleiades, the Double Cluster and M11, to name just a few. When I've viewed familiar open star clusters in the Borg for the first time, the colors seemed more vibrant and the background blacker than ever before. Double stars were also split well with this scope. The Double-Double in Lyra was split at 123X using the Pentax 5.2 mm XL.

The larger, brighter nebulae such as the Orion nebula and Lagoon nebula were a delight in this telescope, especially when using a nebula filter. On Orion, the four main stars of the Trapezium showed up distinctly at only 35X using a Radian 18 mm eyepiece and the nebulous clouds spread out like huge wings. From a dark site, the North American nebula and Veil nebula were a real treat.

Other deep sky objects, such as planetary nebulae, globular clusters, and galaxies were also fun to find and view with this telescope, although the small aperture of the Borg limited the amount of detail that could be seen. This scope provided satisfactory views of the Dumbell nebula (M27) and Ring nebula (M57) at 70X , and partially resolved the Hercules cluster (M13) and M22 at 91X. In a light-polluted backyard, it's hard to find many galaxies. But in addition to Andromeda, I've seen M81, M82, M104, and a handful of other galaxies from my backyard. Of course, from a dark site, the companions to Andromeda stood out clearly as well as M33 and many other faint fuzzies. Still, if you're interested in seeing much detail in galaxies, you'll need more aperture.

When I recently upgraded to a Televue 2X Barlow, I've found that all of my eyepieces, with and without the Barlow, could now be focused without re-adjusting the draw tube. While I could not see a significant improvement in the views with the Televue vs. the Meade, the convenience of not having to keep adjusting the draw tube was well worth the cost.

In summary, the Borg telescope is a high quality, lightweight, compact refractor that lives up to the expectations of what I wanted in backyard telescope. As a bonus, the modular design has allowed me to separate the telescope into sections for taking the entire OTA on trips in a small travel bag. No, I didn't get perfection, but I got a pretty good scope that's a lot of fun to use. If I had to change anything, I would upgrade the focuser to a Feather Touch.

Pros:
- Lightweight, compact, modular design
- Costs less than other major-brand APO's
- High quality APO
- Fun to use and gets a lot of use
- Can be collimated in the field by the user

Cons:
- Can't get a perfect star test (maybe it's me, not the scope)
- Standard helical focuser binds with heavier eyepieces and two-inch diagonal
- Sold as an OTA designed for straight-through viewing
- Hard to find the right hex screw tightness to keep the scope in perfect collimation when traveling/shipping while avoiding pinching in cold weather

As a final note, Borg has updated this model telescope, replacing it with the 101 ED. I don't know if the OTA package has been revised or if any significant design changes were made. If you're in the market for a quality, compact four-inch APO, the Borg is a worthy contender. If you're in the market for perfection, you might want to keep saving up for one of the top-of-the-line APO's.