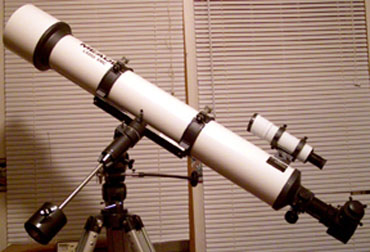 Sitting On its Temporary Home


I've always liked refractors, although the several I've owned have been on the smallish side. Short cool down times, relatively permanent collimation, dust and air current free tubes, unobstructed apertures, and excellent contrast/resolution are a big attraction for me. Refractors are also great when using equatorial mounts since rotating the diagonal when switching to different areas of the sky beats wrestling with the tube of a Newtonian. Of course higher price per inch of aperture and chromatic aberration are the downsides of an achromatic refractor when compared to a mirrored system.

I'd been looking sometime for a big refractor before settling for Meade Instrument's AR-5, 5" (127mm) f/9 refractor. I bought mine from Meade's eBay Factory Outlet for $329.00, shipping included, out of a supply of 30 "leftovers" from the production run of LXD-55 systems. At the time of this review there are only 6 left at this price.

No mount was included with the telescope, but it was nice to see that the purchase included a 8x50 finder, cradle rings, a Meade 26mm Plossl eyepiece and a 1.25" star diagonal. Another purchase I had considered was Orion's slightly lesser priced 4.6" f/8 refractor, but I eventually settled on Meade's 5" since it alone included the accessories in addition to having a slightly larger aperture. The Meade was actually less expensive than the Orion in the long run since Meade didn't charge extra for shipping.

The scope arrived ready to go, and all I had to do was set the finderscope, diagonal and eyepiece. For now I'm forced to make do with a Chinese equatorial mount that is a bit light for the 51" long, 15 pound weight of the AR-5, but which is adequate for sky watching until something more substantial is located.

The scope came with some quirks. First, the 8x50 achromatic finderscope objective does adjust for infinity focus via a threaded adjustable lens cell and lock ring, but the eyepiece has no feature allowing the finder to be adjusted for crosshair clarity. This means that for my aging eyes, the crosshairs are permanently out of focus. Just as bad, the crosshairs are exceedingly fine, and are invisible against a dark sky. Another annoyance is the loose fit of the lens hood, coupled with a vise like tightness of the lens cover. When trying to remove the lens cover, the hood itself invariably pulls off with the cover still attached, which I'm forced to remove by punching it out with my fist before remounting the hood on the telescope.

The AR-5 has a sturdy 2" metal rack and pinion focuser with a 1.25" star diagonal and eyepiece adapter. I was fortunate enough to have a Meade 2" star diagonal on hand, so I mounted this instead of the supplied diagonal. The focuser has a generous 5" of travel and performs as expected for its design. The optical tube interior is of course blackened, and contains three ring baffles, which proved to be acceptable if not optimal protection against off-axis light reflections. 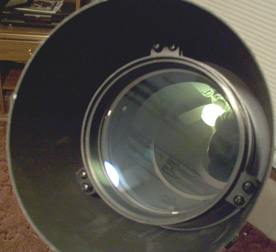 Before using the scope, I removed the hood and checked the threaded lock ring tension on the objective lens, and was pleased to see that it hadn't been tightened with a pipe wrench like some refractors I've run across. Even so, I placed the optical tube vertically and tapped on the tube while applying light locking tension with just a bit of play left to preclude any chance of pinched optics. Near the focuser, as viewed from the objective with a bright light, I also see some brighter reflections from the focuser area that needs to be investigated and perhaps darkened. But for nowÉtime to check out the refractor!

After setup and cool down, the refractor was aimed at a second magnitude or so star near the zenith, and star tested alongside my DSH-8 Dobsonian which I brought out as a check against seeing conditions, rather than a shootout review. I'm certainly no star-testing expert, but I am confident that I can detect serious optical defects in addition to poor collimation. Surprisingly, the AR-5's factory collimation was dead on and had remained that way during shipping. Even so, it was comforting to see that the AR-5 comes with a fully collimatible lens cell should the need arise. I could detect no over/under correction or astigmatism, although the expected purple splash typical of achromatic refractors was present in the outside-of-focus star image, and I wasn't equipped with the proper color filter to reduce that color splash. The star images at focus were typical of refractors; pinpoint, clearly defined and contrasty against a black background with no diffraction spikes that is the hallmark of my Dobsonian. The diffraction rings at both inside/outside focus were well defined and symmetrical, and displayed no uneven brightness differences. I simply have no complaints with the AR-5's optics, aside from the expected false color.

With no optical alignment necessary, I zeroed the finderscope and moved on to some familiar sky objects. The moon wasn't available for first light, so I turned the AR-5 to the next best test object, Mars; which was over a month past opposition and already looking a bit gibbous. Near the zenith in only fair seeing, Mars showed a small detailed disk at 45x with the expected color fringing; red on one side, and purple on the other. I tried powers up to 285x on the planet, but with less than optimal seeing the best view was provided using about half that power. Even so, Mars' image remained bright all the way up to the maximum power attempted. I mentally compared the light gathering ability of the AR-5 to my 6" f/8 Newtonian and decided that both scopes are about equal in that regard, although the color fringed view of the refractor certainly has better contrast and maybe (?) a bit more sharpness. I did notice that I could "locate" Mars outside the field-of-view via light scatter; typical of a moderately priced refractor with minimal light baffling. I didn't find this especially troublesome, perhaps because I accept it in an instrument in this price range.

Turning to Orion, I treated myself to the usual lineup of double stars, and was able to polish off my favorites including Delta, Iota, Beta, Rho, Lambda, Zeta and Rigel at powers from 45x to 114x. I neglected to try 1.5" separation Eta, but at 114x, Rigel's 7th magnitude companion was easily located outside the glare of the primary. M42's four-star trapezium was a cleanly defined set of jewels at 45x. M42 itself has always been a treat for me, and I spent some time studying its considerable detail before moving on. Five inches of unobstructed objective lens will collect a lot of light, and the nebula's detail was impressive.

Moving on, I centered M31 and it's two satellite galaxies. The light gathering ability of the AR-5 over the usual run of 80-90mm refractors was apparent, but I did notice that the satellite galaxy M110 didn't appear nearly as bright as it did in the DSH-8 at the same power. Despite its large size relative to its own refractor class, the Meade can't compete with the light gathering power of the bigger 8" mirror, as expected.

Leaving Andromeda, I moved on to Cassiopeia and made easy scores on M103, the Double Cluster, and several associated NGC objects. Having recently taken my 80mm f/5 "shorty" refractor to truly dark skies over the Thanksgiving holiday where I viewed the same objects, the difference in object brightness through the AR-5 was immediately apparent.

Before calling it a night, I checked out M35 in Gemini, and sighted on the trio of star clusters M36/37/38 in Auriga. Although these are easy binocular objects, they really came alive through the AR-5's eyepiece, showing countless individual faint stars.

In summary, the AR-5 is a solid performing, achromatic refractor that offers very sharp and bright views, and should excel in its best role of double star, lunar and planetary observations. Additionally, the AR-5's big objective lens gathers enough for acceptable deep space use as well. At the eyepiece, it was obvious that I was looking through the optics of a big refractor, and except for the cold and having to get up in the morning I could have happily stayed out all night with my new toy. I think that a refractor buff looking for some aperture oomph at a modest price can't go wrong with Meade's AR-5 if my telescope is representative of production quality.

Five Inches of Focuser Travel All Racked Out!