120ST and other topics 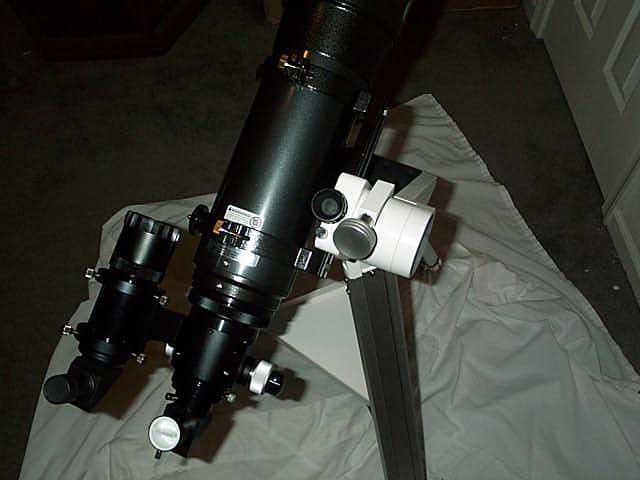 Over the past few years I have used many scopes and setups trying to find the scope for me.

Basically, I wanted the largest aperture scope I wanted to deal with size and weight wise. After trying assorted Dobsonians, 8 inch and smaller Reflectors on an Equatorial mount, refractors of six inch and smaller on assorted mounts, I have settled on this setup: Orion's 120ST on Vixen's Porta mount.

I have upgraded the focuser to William Optics double speed which really helps at powers of 100X or above to keep chromatic aberration to a minimum especially when used with Orion's V-block filter. With the rack and pinion focuser that comes with the scope it was very difficult to find that perfect focusing spot at powers of around 80X or more. Also, the fine speed adjust really helps to keep the vibration to a minimum during the focusing process.

I have considered a new scope that William Optics has released recently, the 110mm doublet, but for my viewing conditions (during the Summer mostly cloudy for instance) I can not justify the price difference: The Orion is $299 + shipping and the WO 110mm is $1400.

My seeing conditions are light polluted urban skies with typically high humidity so I'm regulated to the brighter Messier Objects, double stars, the planets and the Moon. Primarily, I like to look at colorful double stars like Izar and Rasalgethi. When Saturn and Jupiter are up I look at them for a few minutes and move on. Generally, my seeing will not allow high enough power to make Mars interesting except when it comes close like it did a few years ago.

Jupiter is the most interesting planet because I can see quite a bit of surface detail especially when viewed through a V-block filter at 100 to 120X. I have found that the Baader Planetarium Semi-APO filter provides too much correction for viewing Jupiter but does a better job than the V-block on the double star Izar at 150X (with Vixen 4mm LV eyepiece). It really reduces the glare so that the separation is easier to see between the yellow primary star and the bluish secondary star.

The Vixen Porta Mount handles this scope very well as dampening time is very quick: under 3 seconds. I tried the 120mm f/8.3 version but found the dampening time greater and bothersome. Plus, I really like the wide field viewing the f/5 gives.

Even on nights where I can barely detect the mag 4 stars in Ursa Major the Ring and Dumbell nebulas are easy to see in the 4.7 inch optics where with a 3.1 inch scope they are barely detected and quite disappointing. I tried many scopes under 120mm and found, with my skies, a 4 inch scope is passable but even for the brighter Messier objects the 120mm is noticeably better.

People interested mainly in planetary and/or Moon viewing would probably be happier with a long focal length achromatic refractor, like Celestron's f/9.8 102mm, or an APO.

For powers up to around 70 I use either Orion's Sirius Plossls or Edmunds Optics RKEs but when I get to 80X or higher I use Vixen's LV eyepieces. The Plossls and RKEs are 4 element eyepieces and let more light through than the LVs (which have 7 elements) which is good for DSO viewing but when I reach about 80X this is Moon and planet power as DSOs become too dim to be interesting in the 120ST in my seeing conditions. At a darker sight this may not be true. I use the LVs because they maintain 20mm of eye relief where a 4mm plossl will have around 4mm of eye relief which is uncomfortable to me.

I really like the Vixen Porta Mount because you can move the scope around manually to get to a part of the sky quickly and then there are the slo-mo controls to track an object with, I've tried a number of mounts, like William Optics Eazy Touch, and just couldn't get the hang of tracking without slo-mo controls at powers of 100X or higher. But, it appears, many people do not have this issue and are very happy without slo-mo controls.

In conclusion, the 120ST and Vixen Porta Mount is portable and yet shows enough of the sky to keep me interested when certain accessories are used with it.