I have been involved with astronomy practically all my life. I enjoy observing, planetary, lunar and deep sky imaging. I have owned and used a lot of different scopes throughout my life, some such scopes are, Tasco 2.4" refractor, Meade 4" SCT, Celestron 5" SCT, Meade LX200 SCT 10" and Meade LX 200 16" SCT. I have for the most part never really satisfied with the sharpness and quality of the stars, planets and the moon in the SCT's. For me, I was constantly forever collimating, focusing, etc, trying to get a decent observable image. But often was less than good. So recently, I contemplated the possible purchase of a premium APO refractor? I placed myself on a waiting list for a 6" APO refractor and have been on one of these waiting for over 5 years! So, after all that time I often wondered if the high price tag for one of these beauties was worth it?

After talking to some of my astronomy buddies I decided to take the plunge and narrowed my choices to the Takahashi TOA-130 APO. I really wanted the TOA 150 but after calculating the wait time, cost value, etc; I decided on the TOA-130. For me it an easy choice over the TOA-150 because there is only about an increase of about .8" aperture over the 130 and there is a waiting list for the TOA-150 and there was immediate delivery on the TOA-130! The price tag is much higher and to me the TOA-130 is a much greater value than the TOA-150. Although having the slightly larger gain in aperture is appealing, to me it wasn't worth the much extra $$. So, in September of 2005, I purchased the Takahashi TOA-130 APO refractor. 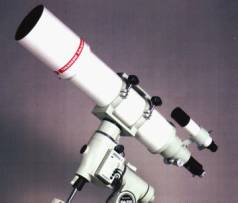 After ordering my scope, it arrived nearly one day later. When I received it, I was amazed on how large the packaging box was! I carefully opened the box and noticed that it was triple boxed with a lot of packing Styrofoam in-between the boxes. It was very well packaged! Finally I got to the OTA and the scope was so large that at first I thought the wrong scope was shipped? "Was it the TOA-150?" After closer inspection it was indeed the TOA-130. My first impressions were how beautiful scope looks! Takahashi is well known for its quality craftsmanship and I can attest that it is a work of art! I don't know what I like more, looking at it set up or looking through it.

Well, now to get to the heart of the review. I lucked out, on the very next few days here in New York, we were blessed with gorgeous sky conditions and NO MOON! Wow, I wasn't jinxed with that new telescope curse. The first night I set up my scope on my deck just to see how everything went together. First I set up my mahogany wood tripod, EM 200 Goto mount with the (2) 11 LB counter weights. Next I opened up the optical tube rings and mounted the OTA, then securely fastened the OTA in place. After the entire outfit was set up it is a beautiful sight to behold! It took me about 15 minutes total to set up. Not bad considering all the parts. It stands about a little over 6 feet at the top of the dew shield. The scope and mount was built with the active user in mind. I'm impressed at how everything is over sized, from the focusing knobs to the mounting rings! I didn't really observe too much that first night; I was mainly getting familiar with the set up, a dry run so to speak. 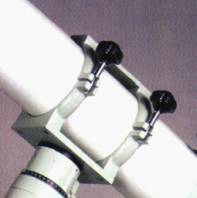 On the second night however a much anxious friend of mine and I drove up to the Adirondacks to a dark site that allows for plus 7 magnitude observing! Very nice indeed! After setting up the scope, my buddy was immediately impressed by the scope's/mount's beauty and craftsmanship. We observed some double stars, clusters, galaxies and Mars. We were both astonished at the scopes ability to snap into a very sharp and stable image, unlike the SCT's that I was accustomed to. The 2.7" focuser is very smooth, which allows for easy focusing. I find that the 5.1" objective needs to cool down for about a 1-hour period to reach thermal equilibrium, (this allows for much steadier viewing). We were able to push the magnifications very high to reveal subtle detail markings on Mars. The scope handles power very well! In the 10" SCT, I rarely could push the magnifications higher than about 25x per inch. With the TOA-130, powers of 50x or greater can be reached, provided of course the seeing conditions allow for it. Boy it's nice to actually see Mars as a sharp round disk in high contrast. 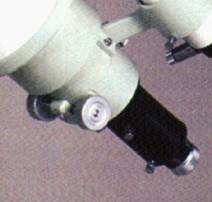 We also did some wide field viewing with a 40 mm eyepiece. We observed the Pleiades, Double cluster, Orion Nebula, Dumbell Nebula, etc. The stars looked more like jewels resolving to mere pinpoints, very esthetically pleasing to the eye. One day I would like to purchase a binoviewer to compliment this setup. It is said that somewhat more detail is observable by using two eyes as opposed to the one-eyed cyclops mode. IMHO the optical quality of this scope is second to none. I'd highly recommend it to anyone who wants a color free triplet APO refractor. It is readily available with usually no wait time involved. Finally my buddy and I retired for the night after about a 5-hour session. The skies were so steady and transparent, (that is rare for this area) that we really didn't want to call it quits but decided it was best to end it when we were visited by a coyote, less than 30 yards away! I being a city dweller was a bit nervous with our visitor but my buddy who is from that area didn't seem at all worried, but nonetheless we called it quits for that night.

I hope this review provides some guidance and information to help in your quest for that great refractor!