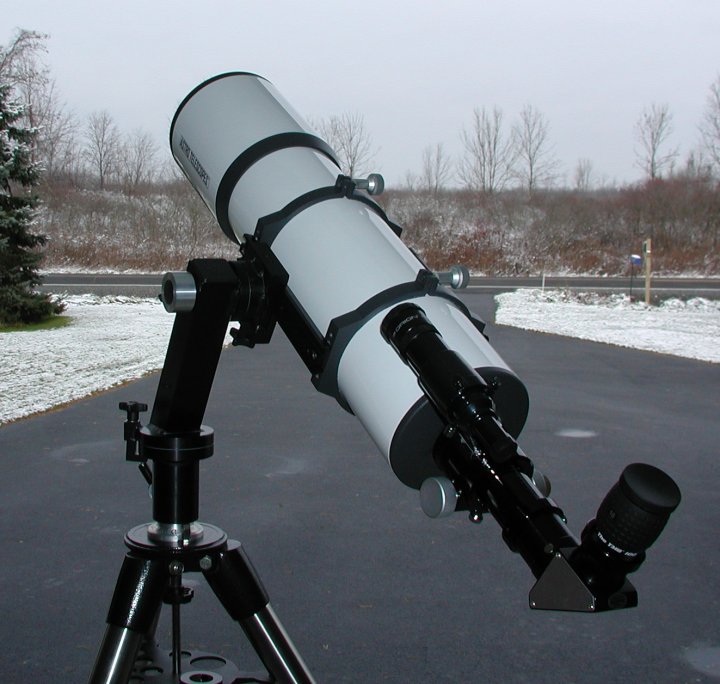 As a confirmed telescope“junkie” and seasoned observer who has purchased perhaps 150 telescopes over the past 50 years I’ve always come back to the refractor as my very favorite type of instrument. Having owned many sizes and configurations of the breed, I’ve been on a seemingly endless quest for the ideal balance of capability, portability, overall quality, and cost. Sadly, no such animal exists. However, in restricting the parameters to the domain of the rich-field telescope, several excellent choices do come to mind.

Looking in particular at the 6-inch category of simple Fraunhofer achromats, I’ve had the opportunity to try several designs from a variety of manufacturers. Certainly, the Meade and Celestron 6-inch, f/8 achromats provide a range of capabilities running the gamut from lunar, planetary, and double star observation to wide field and deep-sky viewing. Unfortunately, their long tubes and significant weight requires a fairly hefty mount that hinders easy portability. The Celestron Omni XLT, a 150mm. f/5 scope, is much easier to mount and transport, but its fine optical quality is compromised by a severe dose of short f/ratio chromatic aberration.

Between these extremes lies the Astro Telescopes 6-inch (152mm) f/5.9, an instrument produced by Kunming United Optics in China and carried by its exclusive US dealer, Hands on Optics in Damascus, Maryland.

Available as an optical tube assembly with either a 2-inch or 3-inch rotating, dual-speed Crayford focuser, this full 6-inch achromat is a hefty but relatively short instrument that folds down to a compact 32 inches with its dew cap retracted and focuser reeled in. A pair of nicely made cast tube rings with Vixen-style mounting bar and a cylindrical carrying handle (all in matte black) are complemented by a very attractive automotive grade gloss white tube with a subtle “diamond dust” effect. Because the scope has significant “in-focus” to accommodate a binoviewer, a 2-inch extender with compression ring is provided for normal visual use with a 2-inch star diagonal. A thread-on metal dust cap with enough heft to double as a hat brim for Goldfinger’s Oddjob is included, but no finder scope, star diagonal, or carrying case is standard equipment.

The telescope arrived in near-perfect condition, the only defect being a small scratch on the bottom of the dew shield that I touched up with some auto scratch remover. Collimation was absolutely dead-on, and the uniform multicoatings on the objective lens made the dust-free glass just about disappear. The tube’s flat black interior and trio of glare baffles proved to be very effective in suppressing extraneous light.

Mechanically, the 152 displays no glaring faults: the calibrated focuser is smooth and free of image shift, but its rotation is noisy and stiff. Perhaps the 3-inch Crayford is better. Everything else, however, displays good workmanship and the use of quality materials.

Optically, this beefy, truncated refractor turned out to be a lot better than expected. Yes, the obligatory chromatic aberration was there, but the six-incher delivered amazingly sharp images with really fine correction for both spherical aberration and astigmatism. Ostensibly, Kunming U. O. hand-figures the optics, and the dealer (Hands on Optics) personally checks each telescope for optical and mechanical quality. I believe it, for the scope has proven to be more than an RFT – it’s a very competent lunar, planetary, and multiple star instrument as well.

To begin observational testing, I mounted an Orion 40mm finder and bracket on a modified Vixen-spec “shoe” attached to one of the 2, 5mm threaded holes on the focuser. A 2-inch William Optics star diagonal was added to the optical train, and tube assembly mounted on a Universal Astronomics Unistar alt-azimuth mount mated to a Celestron tubular steel tripod. This configuration turned out to be ideal: steady enough for high-power observation but light enough to be carried around as a single unit – authentic “grab-and-go.” With an all-up weight of 26 pounds and fully extended length of 39 inches, the scope is also well accommodated by a CG-5-class equatorial mount.

With an effective focal length of 900mm and an f/ratio of approximately 5.92, the telescope is capable of achieving a large range of magnifications with commonly available eyepieces. Being unwilling to compromise tests of the 152’s optical qualities, I used premium TeleVue Nagler Type 6 oculars of various focal lengths, as their excellence is well established.

A first view of the waxing gibbous moon provided a delightful surprise. Just before sunset, the deep blue sky background all but eliminated the expected chromatic aberration. At 100x (9mm Nagler), the lunar surface was rendered in strikingly sharp detail. The delicate Rima Birt near the Straight Wall and the heavily cratered lunar south were impressively defined with wonderful sharpness and contrast. This almost APO-like picture faded as the sky became darker and the purple rim of c.a. became noticeable. Detail, however, remained very sharp, and the anticipated “wash” of violet over the vista was less severe than expected. Stopping the scope to f/9 with a crudely constructed 4-inch aperture stop removed a good portion the false color and mimicked what one would expect from a very good long-focus achromat.

Two days later, I tried a variety of filters to further enhance the image. Both the Sirius Optics MV-1 and MV-20 (the former being more effective) helped considerably in reducing false color at full aperture, but the very best image was obtained with a generic green “moon filter.” This “long-shot” configuration almost totally eliminated the c.a. and produced an image at 180x that was stunning in its contrast and clarity. If the observer doesn’t mind a green cheese moon, the scope and filter combination truly delivers.

Jupiter, always a demanding target for any telescope, showed a bath of purple surrounding its disc at 129x as one might reasonably expect. However, a fair amount of detail could be discerned despite mediocre seeing conditions. The recent dark spot near the GRS was easy to pick up, as were details in the south polar areas. Here, employing the MV-1 filter helped greatly to improve contrast and eliminate a fair amount of the false color; and the moon filter, although it dimmed the image, produced a greenish orb but excellent contrast. I got the impression, from the distribution of the chromatic aberration, that the designers of the objective lens neatly balanced the red and violet overspill so that neither appeared dominant – a good compromise.

A quick look at the rather distant (and low in the eastern sky) Mars confirmed that the 152 is capable of decent planetary performance. At 180x the red planet displayed a cleanly defined gibbous disc, northern polar cap, and Syrtis Major. For some reason, the false color was not much of a factor, but the inclusion of a #23A (orange) filter enhanced the image considerably.

Double star resolution of the 6-incher was again a pleasant surprise. The tight, well-defined Airy disc and symmetrical first diffraction ring generated at medium and high powers allowed clean resolution of the typical “test” multiple stars. Epsilon Lyrae at 129x displayed 4 “bullet holes” with very little spillover but the slightly greenish cast expected from achromats. Alnitak (in Orion’s belt) was cleanly divided at 129 and 180x despite rather poor seeing conditions, and the tricky unequal double Delta Cygni revealed its tiny companion at 129x and above. Rigel showed a prominent halo of purple around its bright primary, but the miniscule companion showed clearly at powers of 70 and above. Overall, very nice performance from a short-focus achromat.

Where the telescope really shines, however, is in its rendition of deep-sky objects. The tiny pinpoint stars produced by the instrument made a variety of open clusters spectacular. With the chromatic aberration ceasing to be a factor with stars fainter than roughly 4th magnitude, the Auriga trio of M 37, M36 and M 38 generated the sought-after “diamonds on black velvet” look that refractor enthusiasts love. A 19 mm TeleVue Panoptic (47x) worked beautifully here, but a sensational view was obtained with the new TMB 100 degree 16mm ocular(56x) that darkened the field of view and gave the strong impression of floating in space near the clusters.

The Pleiades (though c.a, was a factor) and Andromeda galaxy provided an equally memorable observing experience as did the Double Cluster in Perseus. The Orion Nebula was a glorious sight with tendrils of pale green and all six stars of the Trapezium at higher magnification. When compared to an excellent 125mm apochromat, the 152mm produced noticeably brighter images with stellar rendition almost as tight as with the vaunted apo. Clouds and haze interfered with forcing the scope to its magnitude limit, but I do suspect that its image brightness and contrast will enable it to perform very well when pushed to the extreme.

Overall, my first impressions of the Astro Telescope 152mm achro refractor are very favorable. Its optical quality is significantly better than expected, and it’s small and light enough to be portable. Yes, the obligatory chromatic aberration is there, but the pinpoint stellar images and higher power capabilities make it a versatile instrument that is a great deal of fun to use. At $799, it’s not exactly inexpensive, yet still a bargain given its quality. I would like to see a slightly sturdier, smoother-rotating focuser – but not much else really needs improvement. Of the several short-focus 6-inch achromats I’ve owned, this one is my favorite. I’ve sold the others, but this scope appears to be a keeper.

Now, if they would just produce this same telescope with ED glass for a bit more money, I’d be the first in line.

p.s. I have no affiliation with either Kunming United Optics or Hands on Optics