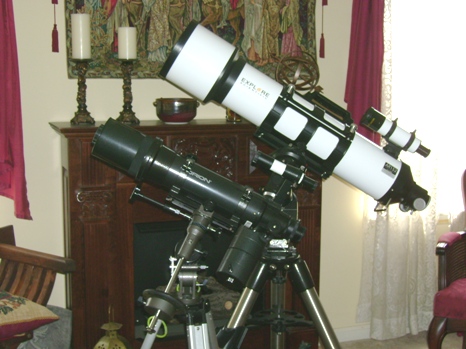 This is a review of the new Explore Scientific 6” f/6.5 achromat:

My wife Sheree was wondering (again) another 6” achromat? Well I just purchased my 5th one in the last five years or so.

She is confused, for she said I thought you like the Astrozap? Well, I did. I felt I wanted to go back to a shorter tube wider field 6”. I also tried to convince her that we (all of us) need to start spending a bit to help stimulate the economy. That didn’t quite work.

Why, I asked myself? Well my close friend and observing colleague Dr. Werkman owns a new ES Comet Hunter, and the views were great when a first saw through it a month or so ago. He seemed to have good confidence with this new product and company. So I took the plunge, but for the 6” refractor.

Now what does this new scope have to offer. Plenty for the $.

The scope itself seems to be a very well made tube assembly, with optics fully multi-coated called EMD (Enhanced Multi-layer Deposition). Very little reflection seen while looking down the barrel in full room light. Multiple baffles can be also seen.

I also like that is has an adjustable cell for easy collimation. I do think this is important, and have seen more expensive refractors without this that are out of collimation.

The focuser is another plus. It is a Crayford 10:1 micro-focus, which is both smooth and beefy. Much better than others I’ve seen, like on the past Antares.

The one part on the tube that is a bit of a minus is the short dew shield. I guess this is to keep it compact for the case. I personally would have spent more $ for a retractable dew shield. The scope is worth it.

Now for the meat of any scope...the optics.

Here is the info I received from Explore Scientific upon a request:

Each and every refractor is checked at least four times: 1) Interferogram at JOC with minimum acceptable level at 0.25PV; 2) visual optical test at JOC; 3) upon arrival at our logistic center each refractor is double pass tested by two experienced testers using an optical flat; and 4) unpacking, mechanical/cosmetic inspection, and repacking. In essence every scope is hand selected...much to the chagrin of the factory as anything that does not pass our inspection is shipped back to our factory.

Now mine is SN. 7, and apparently tested above average at better than ¼ wave.

Doing the star test on achros I have found is tough. And I must admit there was some concern, but Russ at Explore Scientific try to assure me the scope was tested and passed rather well during their testing procedure. I admitted I can read the mirror scopes much easier, and was told by a highly regarded refractor expert, that a green filter is used during star test (even APO’s), in which ES does use.

So after checking collimation with a refractor collimating eyepiece, I found only a slight quick adjustment was needed. So it was ready for its first night.

The summer here in Pa. has been brutal for us, and I only had one trip so far to one of our dark sites in months. Luck changed a bit with after Hurricane Bill zipped up the east coast allowed for a weak cold front to pass, bringing on one decent clear moonless night.

So nine of us headed to our best “one night stand” dark site. It’s a pretty good site that can go 6.5 mag on really good nights. This particular night was about 6.3 or so. A bit of humidity still there, and so was some dew.

So as it was, I was also helping our new member with his scope. We were set up side by side to make things easier of course. Two 6” refractors, one APO the other achro, were getting first official light. COOL!!!

The APO sat a top an Orion Atlas mount and my achro on top of a Celestron AS CG5 (a nice match).

First looking at the ES 6” achro, the view was extremely good, with the bright nebula showing some structure in a large field of pinpoint stars, and showing excellent contrast.

Over to the APO, the view was also wonderful as expected, though virtually the same overall as the achro.

Next was M-13 using the same eyepieces. Again the achro gave a stellar view a 90x resolving stars across the entire “orb”. The galaxy Ngc 6207 stood out well near the edge when I offset the glob. Very nice view.

Back over to the 6” APO and what a view with the 13mm Ethos. Resolved the glob well, and the galaxy Ngc 6207 stood out well here also. Again the view in the two refractors was similar. At this range of magnification the views were basically identical.

I then inserted a TMB 6mm eyepiece (165x), and the cluster was resolved beautifully with still very tight pinpoint stars, and good contrast.

At this point the APM was off doing some double stars for a bit.

I just wished the sky was a bit more transparent. The Sagittarius region lacked contrast to the eye this night, but M-17 without a filter with a Meade 18mm UWA (55x) was a great sight even without a filter.

One of my favorite globs is M-22, and at 90x the view was a perfect blend of resolution and large field. I still see it in my head as I type this.

At this time Jupiter was in the APM at 300x. Okay, new member and scope so I looked. I also figured for this review I would have to point the ES at Jupiter also.

Yes, the view in the 6” APO was great with very nice detail. No CA of course.

Okay, let’s put the ES 6” on Jupiter with a TMB 4mm (248x). Yep, some CA, but the planet actually looked pretty good, and even some others mentioned the same.

A week later the seeing was even better, so out in the front yard with the Evil Orb beaming, I looked at M-13 and Jupiter at 330x (TMB 6mm + 2x barlow). The view held up well with M-13 showing many little points of light across this “good” orb. Jupiter on moments of best seeing showed some nice detail within the belts, though not a planetary scope, it was a pleasing result. I wondered how a planetary filter would do?

Now back to the real observing, from the dark site the week prior.

The Veil nebula is a fine subject for a scope like this with its wide field, and enough light gathering to see nice detail. At 55x with an Ultrablock filter showed the eastern side as a curved twisted and knotted rope of nebula. Taking out the filter the Veil still was seen very well.

I wanted to head back to Lyra for a glob, galaxy, and a planetary nebula.

The glob M-56 was well seen at 165x with some faint stars resolved. The galaxy was the interacting Ngc 6745. At 113x its faint slightly elongated glow could be seen next to a parallelogram of faint stars. Nice pick-up for not the best of nights.

The scopes at 90x and 92x the view was rich with lots of field stars, and the nice bright Ring nebula seemingly floating within.

We both bumped up the power with the APM 6” at 240x, and the Explore Scientific 6” at 247x. The views in both 6” refractors showed the Ring impressively at these magnifications.

One thing I did notice here was the 13th mag field star next to M-57 was a bit tighter in the APM. It wasn’t something that jumped out of you, but I could see it. The best optics is there, and should be. You could tell the APO’s star images were just a tad more pinpoint at this magnification range.

At this point the dew was starting to get worse, and I was having a slight issue (though now fixed) with my dew system.

So a couple galaxies to finish.

First was Ngc 7457 in Pegasus. This is not an overly spectacular galaxy, though to me it does look like a football. It also sits next to a line of field stars, which gives it a pleasing look, and is a favorite in my 8" refractor. At 90x the galaxy stood out well showing some nice shape as described above, and a bright core area.

Last view as I’m getting close to losing the battle with the dew was Ngc 404 or Mirach’s Ghost.

The APM was also heading there also after I told our newest member that it really in a nice view with the bright star Mirach and its striking golden orange color, and the galaxy just NW of the bright star.

Both the 6” APO and the 6” achro gave near identical views at 92x and 90x respectively.

As the APO went back on to some more marvelous views of Jupiter as it was around meridian. I stayed with Ngc 404 and put in the TMB 6mm (165x) to get a more close-up view of the galaxy. At this power the galaxy showed a round shape and a bright stellar nucleus.

It was around this time I noticed a bit more glare coming from Mirach, and this is when I discovered my anti-dew equipment was not working properly. Yep, done for this night.

So first light with the new Explore Scientific 6” f/6.5 refractor was fine, and the owner of the APM 6” f/8 thought the same with his new baby (yeah, that is a very good scope). He is anxious to get it back up one of the dark sites again in September. So am I after this past horrible summer here in the northeast.

My thoughts on the scope are that Explore Scientific has a very nice achromat here for what it is, and the price. If they keep their promise to analyze each scope, then that is a thumbs up for them.

I think this is a must for if you wish for a shorter achro. The optics needs to balance a bit with good correction in minimizing any other aberrations, and that they are fully multi-coated optics. So yes it has CA, but the optics still provide very sharp with good contrast views (that is important).

A great help to the review of the ES 6” f/6.5 was to see how it could compare to one of the best 6” refractors around. Yes, the APO is the better scope (It better be!!!), showing clearer tighter images, but this achro was not far off. In fact, the images were much closer, than different. The owner of the APO thought all the views were identical except Jupiter. As an experienced eye, I could see the slight differences, but I must say they were very close. So let’s say “near” identical in some cases, particularly the DSO’s, thought the globs are a tiny bit cleaner in the APO. Even here the achro was still very good at resolving stars even at high power (165x plus).

The scope’s good stuff: The scope’s not so good stuff So I would highly recommend the Explore Scientific 6” f/6.5 achromat. A good balanced achromat that can give very wide field of view, but also can push magnification with good results.

Karl Krasley
Pennsylvania
41st year as an amateur astronomer and founder of the Chesmont Astronomical Society
Own 5 telescopes at this time (22" dob, 12.5" dob, 8" refractor, 6" refractor, 4" refractor)