GPU APO 140/1200 oil spaced lens in custom made tube with star test recording. I met Mr. Pal Gyulai, the owner of GPU Optical, at a Hungarian amateur astronomer meeting in August, 2006, when he had a presentation about his principles and philosophy in optical lens design for Hungarian amateurs.

According to his approach, he wanted to develop the best possible apo lenses/telescopes of the REAL world; not just in the computer screen or measured by an optical bench in a laboratory. That is why he did not want to deal with mechanically and thermally extremely sensitive air-spaced APO lenses. Instead of chasing the maximal theoretical perfection he wanted to make a fault-tolerant glass which can outperform the best theoretical design in a real world, in an environment of sudden temperature-changes and even some collimation problems that always exist in a real-world system. That is why he uses oil spaces and very special glass materials.

As I was listening his optical lecture, have decided to give a test ride to a GPU lens. I have an old fashioned university degree in mechanical engineering so I am not an expert in optical quantum physics but his explanations were clear and understandable for me. This expertness combined his enthusiasm has convinced me to order a piece of glass. (Later, I had a chance to test a GPU 127/890 shortly and this experience could approve my decision above. I have seen such an extremely fine details on the disk of Jupiter at dusk (!) which I could never before…) 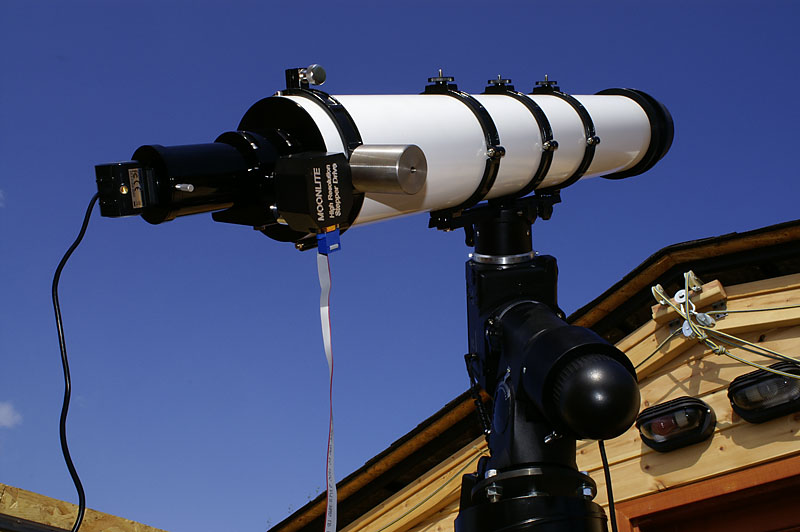 And he has done it!

I have made aluminium OTA with MoonLite HiRes focuser and am working on a custom modified EQ6 mount. (By the way, hopefully, this will be another good story in the near future…) I have made a very efficient, “absolutely black” baffle ring system within the tube which provides high contrast for the OTA. (Mr. Gyulai has kindly provided me a computer generated baffling plan with the lens, I only had to tell him the internal diameter of the telescope tube I would use.)

Although I did not have a chance to compare it directly against a premium APO of another manufacturer (but I am working on it…), I can report that my 140/1200 GPU APO lens seems to be free from any kind of aberrations or imperfections; both its Airy disk and defocused patterns are textbook-like. I used Alpha Lyrae (Vega) and Alpha Bootes (Arcturus) for star testing due to their high brightness and opposite color index with two eyepieces: Celestron Plössl 11mm and TMB Super Planetary 4mm. I have also made AVI recordings in primer focus using Philips SPC900NC webcam and K3CCDTools3 software. As you can see in the attached video file, the defocused pictures (Vega, xvid CODEC, B&W, playback is accelerated by 3-times) are practically identical intra- and extrafocally; I could not find any visible differences. This lens delivers the best star test I have seen so far (I have purchased the book of H. R. Suiter “Star Testing Astronomical Telescopes” just for case of testing this lens.)

So, there is no any kind of color edge around the centered pinpoint stars in focus; only the eyepieces have some lateral color aberration at the edge of their fields. The amount of this colouration depends on the type and brand (or price…) of the EP. Since I wanted to have a “perfect” lens, I wanted to check the source of this aberration, just to make sure this is a problem of the eyepieces, not the objective lens. I have made a short test to prove this.

Keeping the eyepiece in the center position, I looked at a branch of a distant tree in front of the blue sky; and the view was perfectly color free. Now, keeping the eyepiece position in the center of the focuser tube, I slightly adjusted the direction of the OTA in such a way that the observed branch went to the edge of the field of view. In this position a thin purple and an orange stripe was visible at the inner and outer edge of the branch, showing the lateral color. Now, after fixing the OTA orientation, I shifted the adaptor manually (together with the eyepiece in it of course) to the position in which the previous branch got into center position again (obviously, now the EP was excentrical in the focuser drawtube). As soon as the branch has got to the middle of the eyepiece again, the false color totally disappeared! I tested other eyepieces as well but the result was always the same; just the degree of this eyepiece aberration was different. So, I could prove that the eyepieces were responsible for this type of lateral color aberration, not the objective lens itself.

Practically I can say: the image quality of this GPU APO lens is as good as your eyepiece is good. I think this is the best feature which any objective lens can provide. So, the above-mentioned experiment proves Al Nagler’s famous saying: “The eyepiece is half of your telescope” is true indeed. I am already saving money for some high-end eyepieces. It seems even if they are really expensive, it is worth to buy them if your telescope is good enough.

Obviously, the air refraction below cca. 45° altitude produces some red (top) and blue (bottom) edge of the objects observed. But this color error is not a problem of the telescope, and special filters are available to remove/correct it. But anyway, this is the first telescope of mine that is practically good enough to show this feature of Earth’s atmosphere. So, a better lens will show you both the problems in front of the telescope (e.g. refraction of atmosphere) and behind the objective lens (eyepiece problems).

Just one word is more than enough: incredible!!!

I had a part time job in a public observatory in Hungary during my study years and could observe and demonstrate the views of Moon, Jupiter, Saturn, etc. to the visitors through different type, aperture and quality of scopes (from 63/840 Zeiss Telementor achromat to 12” f/8 Zeiss Newton). But I have never seen so fine and tiny details on Jupiter’s clouds as I could with the GPU APO... It was amazing to see these extremely fine ripples. Now I feel my first enemy is just the weather conditions and turbulences of air (and naturally low-quality eyepieces…) because this apo is definitely the best element in my optical chain now.

The Moon seemed to be a brand new celestial object for me using this telescope. Even if there was always some air turbulence (but transparency was quite good recently) each small part of the surface was in movement continuously. But, in spite of this fluctuation, the image was razor sharp at every magnification! Like a reflected human face on the surface of a calm lake on a breeze day: you can see every wrinkles or acnes on the face in spite of everything is moving. It was really wonderful spectacle.

Observing Jupiter with 300x, I could see extremely fine details, even around the Great Red Spot! Sometimes I felt this lens would also tolerate (or even more, would need) higher magnification than 300x…I have seen not just the cloud-belts (which is evident view using this aperture) but some eddying edges of the clouds as well. Not as clear and nice as it is well known from HST pictures of course (…) but it was obvious and well recognizable, in spite of just the little bit better than mediocre seeing. (I did not use any filters for this test.).

Double-double of Epsilon Lyrae was an easy and very nice object using any of my middle-ranged quality oculars. Also, Albireo (Beta Cyg) was obviously very easy and wonderfully colored picture in any eyepiece. But, after taking delight in these beginner 0.5’ and 2-3” doubles I wanted to find much closer and more difficult pairs to evaluate the resolution limits of this lens. So I put the 4mm TMB Super Planetary (300x) into the focuser and have chosen two couples: 16 Vul (0.8”) and Beta Del (0.5-0.6” depending on double star catalogues).

The shape of 16 Vul was extremely nice, nearly the same shape as the digit of their separation: “8”. Their Airy disks touched each other, but there was a well recognizable symmetrical constriction on both sides. I was very happy because I have never seen such a close double star with this clear shape, except in a book.

Obviously, Beta Del was much more difficult. Although 16 Vul was also slightly below Rayleigh’s criteria of resolution for this aperture (140mm or 5.5”), theoretically, Beta Del cannot be seen as pair using this lens. In spite of it, I have to tell it honestly, I could suspect a slight elongation looking at the Airy disk. I would not declare that “I have seen it”. But it was good enough experience to me for visiting this very close pair again next time when the weather will be better than recently… That time I will try to define their PA and a double star catalog will decide whether I have seen them or not. I can hardly wait for that clear night…Bottom line:

In spite of my tests above, I could not reach all the limitations of this lens so far. I mean cannot inform you e.g. about the image quality at the edge of the FOV using ultra wide angle 2” premium 40mm EP because I do not have it. Or, I could not achieve the maximum usable magnification in practice. But I feel that 300x will absolutely not be the end of the story, although I do not have shorter focal length premium EP to test it, and the seeing is also a significant limitation in my country…. I do not have data (yet) regarding photographic performance, and, as it is written in the preface’s paragraph, I did not have a chance to compare it with other premium brands. (I will do it sooner or later and am also willing to present photographic results in another test report on this website, as soon as I have a CCD camera.) But it is already sure that this GPU oil spaced lens delivered the best Jupiter images to me, and generally, the best optical performance at the observing field yet. I could not find any imperfections of this lens from my backyard observatory (next to Budapest with more than two million inhabitants…) until now, and the price of this GPU lens is really reasonable on the European market…

As soon as I have premium eyepieces and other accessories to test this lens again on a higher level will revert.Attila Madai