In my quest for unobstructed optics of good but manageable size and cost I decided upon the C6-R about a year ago. The order to Astronomics was only for a tube assembly since I already owned an Orion Sky View Pro equatorial mount that can handle this telescope quite well.

As many of you already know the C6-R is manufactured in China by Synta Optical Co. The refractor is sold under various other brand names. It is an achromatic refractor of the Fraunhofer design with a focal length of 1,200mm. The short focal ratio (f/8) and possibility of significant chromatic aberration was not a concern due to my review of the existing literature about this telescope.

The C6-R arrived in a big long box two days after ordering. It was very well packed and survived the long trip across the pond without a scratch. After unpacking the double boxed tube assembly I found a good quality 20mm Plossl eyepiece, a very good 1.25” mirror diagonal and a Cheshire collimating eyepiece all well packed in a small box. The tube assembly had the mounting rings and dovetail attachment for the Sky View Pro mount. An excellent 9 X 50mm finder scope was also included. (see figures 1 and 2).

The only assembly required was that of the focuser and finder. The alignment of the focuser to attach it to the optical tube is quite simple. The holes for the screws that attach the focuser to the tube align in only one position. The finder mount is pushed into a slot built right in the focuser. The finder is then placed in the mount and later aligned using only two adjustment screws. After 44 years in amateur astronomy this is one of the best alignment mechanisms for a finder telescope that I have used. The next step was to mount the optical tube in the mount and I was ready to check the collimation with the Cheshire eyepiece provided for this purpose. The Cheshire test indicated that the telescope objective was a bit out of collimation. A simple adjustment of the objective cell push-pull collimating screws solved the problem and now the telescope was ready for first-light. Figure 3 shows the objective cell with one pair of the three push-pull screws. 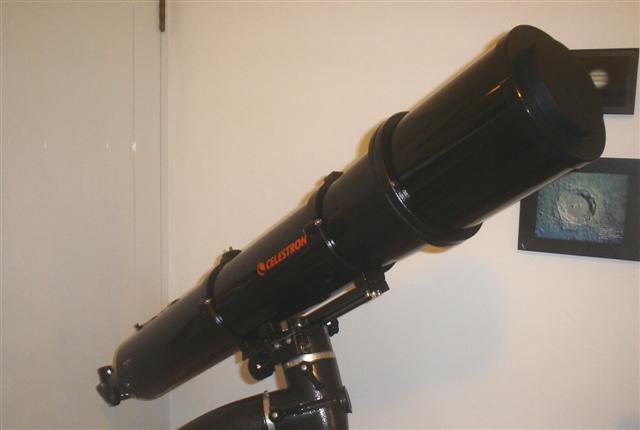 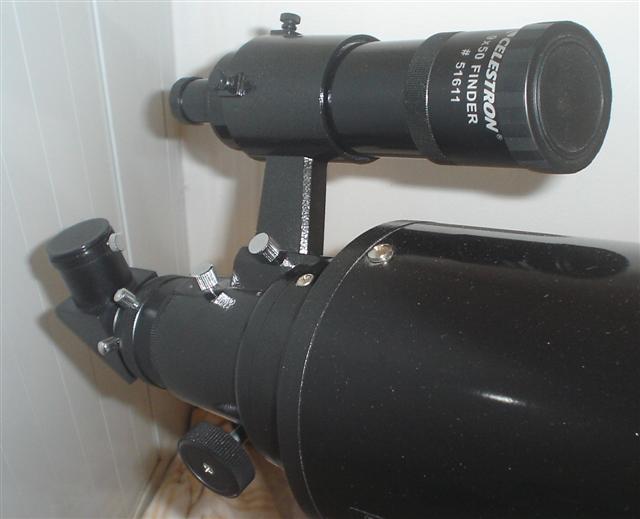 Figure 2. Detail of the C6-R focuser with diagonal and Finder 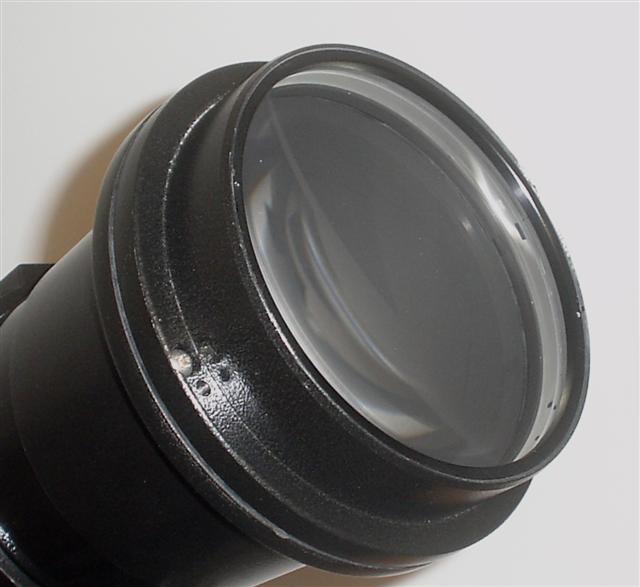 Before taking the telescope out for observing I noticed that objects in the zenith would require some contortions of my physique that included lying very low in the ground. This was evident even with the tripod legs fully extended. I realized then that the 16 inch mount extension sold by Orion for the Sky View Pro mount would be obligatory but in the meantime I had to do with what I had at hand. Another additional accessory to get is an extra counterweight for the mount to be able to balance the telescope in the SkyView Pro equatorial mount.

As usual the “new telescope syndrome” attacked and I had a few days of clouds that did not allow even a peek at the sky. Finally in the fourth day clear skies were available and I went out for the obligatory star and Ronchi tests. After allowing about an hour for thermal equilibrium of the optics I chose my test star. Arcturus was was chosen for testing. The seeing was not at its best but adequate for the test at hand. The test star was first focused at medium power (120x). At this level of magnification it showed very little if any false color and I could focus it to a very tight point. I increased the power to 300x and defocused the star 3mm on either side of focus. The results are shown in figures 4 and 5 where you can see the extra and intrafocal images of the star obtained as a still image with a Phillips Webcam. The outer ring in the intrafocal image is a bit tighter and brighter than that of the extrafocal image indicating some degree of spherical aberration. Nonetheless the images do not show any signs of astigmatism or zones. These images were obtained without a green filter. Further testing with my Ronchi grating and four parallel lines in the field also indicated well controlled spherical aberration probably ¼ wave or less. The focused image of the star showed a bright concentric first ring around the Airy disc and another dimmer secondary ring with the hint of a third one. My evaluation of the optics was that they were very good with good color correction and acceptable spherical correction. Further observations corroborated my early findings. 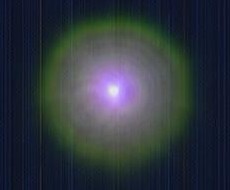 Figure 4. Extrafocal image of Arcturus with the C6-R.
Taken as a single image. 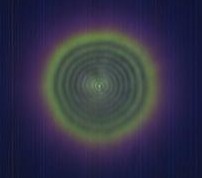 Figura 5. Intrafocal image of Arcturus. Taken as
a single image.

Jupiter’s apparition came just in time to test the telescope. Visual observations of the planet indicated that the C6-R performed very well in discerning detail of the cloud belts and zonesr. Low power images of the planet showed a diffuse purple halo around the planetary disc that did not interfere much with the observation of details. The use of the Orion minus violet filter improved contrast and made a lot of the detail more visible. In fact, the visible detail was so much that it precluded any drawing of the planet. Using my Phillips 900 PC Webcam coupled to an infrared filter and the minus violet filter plus a 2x Barlow I was able to obtain the image in figure 6. Even though this image is the result of the processing of multiple frames, you can see that the C6-R is capable of capturing a significant amount of detail in Jupiter and the round shape of one of it’s moons. Figure 7 shows a recent image of Saturn taken recently under not so good seeing conditions. A recent image taken with the Naval Observatory 8” Clark refractor and posted in the Web doesn’t show more detail than this one. I am not, by a long shot, trying to imply that this refractor is as good as the Clark but the fact is that it is capable of very good performance on the planets.

Lunar observations show very dark crater shadows with no hint of purple haze. There is some purple rim around the moon but no more that that which I find when I use my 76mm f/16 Japanese refractor from the 60s. The 76mm has superb optics. Details on the moon with the C6-R are sharp with high contrast.

Another area where I have found the C6-R to excel is in double stars. Under good to excellent observing conditions this telescope is capable of splitting close doubles of equal magnitude to the limit established for its aperture. On doubles with unequal magnitudes, where a refractor should excel, the C6-R does an excellent job. Such was the case when I first observed Antares. The greenish companion came out well resolved. I have been trying to resolve Sirius companion, the Pup but no success yet.

One item that has produced some discussions about this telescope is the focuser and the fact that it is usually not well aligned with the optical axis and there’s that heavy grease in the mechanism etc. I found the focuser quite acceptable and was able to align it using the two Allen wrench screws that avoid slop in the focusing mechanism. The focuser runs smoothly and in my climate this grease is not heavy at all especially in August with temperatures peaking during the day at 95 with very high humidity. The average temperature here during the year is 80 degrees.

More recently I ordered the 16 inch extension for the telescope mount. This is definitely necessary to keep the telescope at a more comfortable altitude when observing. 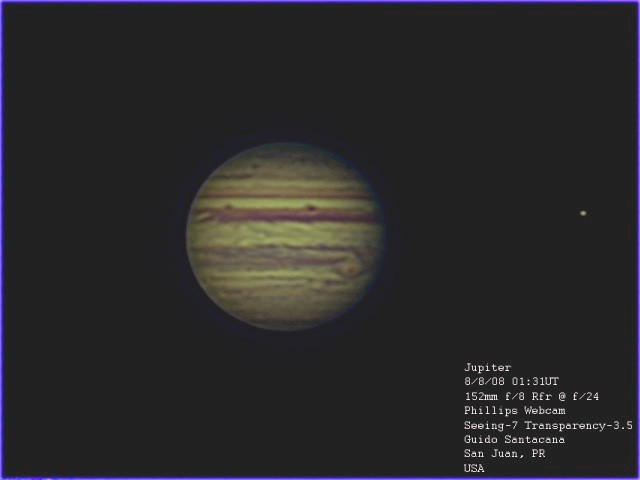 Figure 6. Júpiter with the C6-R and minus violet filter.
Notice the detail captured in the cloud belts and the Great Red Spot (GRS). 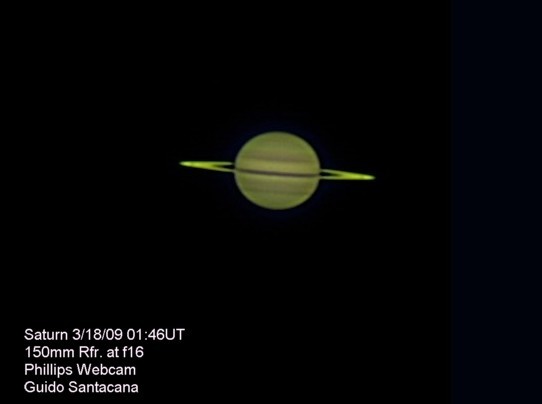 Figure 7. Saturn imagen recently with the C6-R. The seeing was about a 6.
The greenish color is due to the minus violet filter.

The Optical evaluation of the C6-R resulted in excellent chromatic correction for a fast telescope. There was also some spherical aberration but in my opinion it fell well at or under the established limits for good optics. Observation of extended objects like the planets resulted in good resolution of detail and good contrast for such a short focal length refractor of this aperture. The use of a minus violet filter improves contrast and removes any residual color except in very bright objects like Sirius.

In my opinion this specimen of the C6-R passes the test as a very capable medium aperture refractor telescope. The short focal length permits the telescope to be utilized in the observation of deep sky without compromising planetary and lunar observations, a field where the refractor is still king. Mechanically the telescope is well constructed. I found the focuser quite adequate and in my case well collimated with the optical axis. At this level of cost this is a well made end effective telescope for refractor lovers. I would say it is a “keeper” but my wife will never believe that.