A Tale of Two Refractors: Konus 70mm versus Ranger 70mm

A Tale of Two Refractors: Konus 70mm versus Ranger 70mm

A friend with a newfound interest in astronomy asked me to outfit him with a suitable telescope. He wanted something with an absolute minimum of upkeep and adjustment, so I decided that a small refractor would best suit his needs. When I saw a Konus 70mm refractor OTA advertised on an internet site for $40, I purchased it. I have seen the same telescope sometimes selling used for $40-$80 for the tube assembly alone, or $150 for the tube plus equatorial mounting. This article will review only the original equipment that came with the telescope, namely the finder and the diagonal, but not the mounting or eyepieces. As a basis of comparison, I did a side-by-side test with my 70mm Televue Ranger, a premium-quality achromatic refractor which sells for about $400 used. The Konus was mounted on a home-made equatorial mount, the Ranger on an EQ-1. 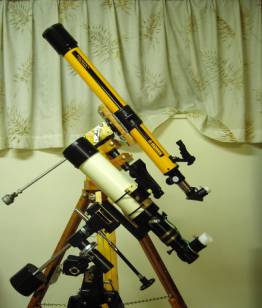 The Konus optical tube is 36 inches (92 cm) long, including the non-retractable black plastic dew cap which extends 4 inches (10 cm) past the objective lens. The Ranger, by comparison, is only 18 inches (46 cm) long, and no dewcap is supplied. As a travel scope, the Ranger is airline-portable, the Konus is not. Neither scope has adjustable collimation for the objective lens.

The Konus has focal length of 900 mm and a focal ratio of f/12.8. Such a long focal length lens is quite forgiving of chromatic and other aberations, and should perform superbly if well made. The Ranger is shorter, with a focal length of 480 mm and a focal ratio of f/6.9, which gives it better capability for low-power, wide-field views, but which necessitates the use of a Barlow lens to reach high magnifications. Both telescopes have achromatic doublet objectives, but the Ranger has an element of ED glass, which should reduce the chromatic aberration below that of a conventional crown-flint glass doublet of the same focal ratio. The Ranger, however, is not advertised to be apochromatic. How well it does will be ascertained by the star test.

The first impression that one gets when handling the Konus is the prevalence of plastic in its construction. The tube itself is metal, finished in an attractive orange colour with black trim, but the dewcap is plastic, the rack-and-pinion focuser is plastic (despite the chrome paint), and the red-dot finder is mounted on a plastic stalk, ready to snap off at the first accidental bump. Even the diagonal mirror is mounted in a flimsy black plastic enclosure. Upon closer inspection, one sees that the diagonal has a constricted aperture, so that the full 1.25-inch aperture of the focuser barrel cannot be used, thereby restricting the field of view of a scope that already has a long focal length. I quickly set this diagonal aside in favour of a full-aperture generic 1.25-inch metal mirror diagonal, which was used for the majority of the tests in this review. But that flimsy plastic diagonal would have a further surprise for us, as we will later see. The photo below shows, left to right, the Televue diagonal supplied with the Ranger, the generic metal mirror diagonal, and the plastic Konus diagonal; the constriction in aperture is obvious in the latter.

Like many telescopes manufactured in Asia, the rack-and-pinion focuser on the Konus is lubricated with a glue-like substance that sticks to the hapless user's fingers whenever he/she touches the exposed teeth of the rack. I cleaned it out the best I could with repeated scrubs with cotton swabs dipped in isopropyl alcohol. 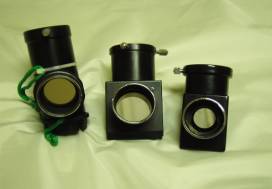 Upon looking up the focusing tube on the Konus, I found to my dismay that the diagonal is not the only constriction; in the middle of the focusing tube, there is a constricting aperture, possibly intended to stiffen the tube or as a baffle for stray light. The focuser looked plenty strong, so I took a rat-tail file and filed out the constriction to allow the full aperture to be used.

By contrast, the Ranger is all metal and feels like it is built to last. The focusing is accomplished by a combination of a sliding coarse focuser, supplemented by a very smooth 1.25-inch barrel helical fine focus with a travel of 16 mm (0.63 inch). This is sufficient that for my set of eyepieces, there is never need to touch the coarse focus. Just using this helical focuser makes you feel like you are at the controls of a fine instrument.

A neat feature of the Konus is the inclusion of a hinged clamshell tube ring. By simply unscrewing the locking screw, one can remove the tube or reposition it for balance. Of course the clamshell is made of plastic.


The Ranger is supplied with a nice sliding metal dovetail which allows for easy rebalancing if heavy eyepieces or other accessories are added.

The inside of the Ranger's tube is lined with a black, foam-like material with a rough surface, which effectively controls reflections of stray light. The inside of the Konus tube is simply painted a flat black. But a surface which looks black face-on could be very shiny to light rays incident at a small angle, and this is indeed the case. There is a single baffle located halfway down the tube of the Konus to combat these contrast-destroying reflections, but this baffle is simply a piece of rough-cut metal which does not hug the sides of the tube closely, and which allows stray light to leak around. I removed the focuser and inserted a sleeve of cardboard lined with black velvet into the bottom half of the tube, which blocked the light leaking around the baffle and also killed reflections in the bottom half of the tube. The inside surface of the focus tube is smooth black plastic and quite reflective; I inserted a sleeve of rough paper painted black to overcome the reflections. The inside of the Konus' dew cap is also quite reflective, and I lined this with black velvet. The photo shows the before and after treatment of the dew cap.


The Ranger is not supplied with a finder, and indeed, with a 1.25-inch barrel eyepiece, one can get a true field of view of 3.3 degrees, which may make a finder superfluous. The Konus, with its longer focal length, can give at best 1.8 degrees true field of view, even with all the hidden constrictions removed, making a finder of some sort necessary. A red-dot finder is supplied, but it is of such flimsy construction that by the time I received it second or third hand, the on-off switch has already detached from the plastic housing of the finder, making it impossible to turn on. I fixed this by using epoxy to glue the switch back onto the finder housing. Even at the low setting, the LED is too bright for night-time use.

Of course, the true test of a telescope is how it performs under the stars. For eyepieces for the Konus, I obtained a 35mm Erfle, 17mm and 10mm Plossls, and a 6mm Orthoscopic giving 28x, 53x, 90x and 150x, a good range of powers for my aspiring astronomer friend. For the Ranger, I used a 24mm Erfle, a 9.5mm Plossl, and a 2.8x Klee Barlow to give 20x, 51x, 56x, and 143x. The generic full-aperture mirror diagonal was used on the Konus for most of the following tests, except as noted.

The first object was Mars in mid-November of 2005, when the disk was 19 seconds of arc in size. At 150x and 143x in the Konus and Ranger, respectively, with no filters, the North polar hood and the limb brightening were apparent in both scopes, and the albedo features Mare Sirenum/Mare Cimmerium were visible on the salmon-colored disk. Not much to choose between the two.

Next was the Pleiades, with the Konus at 28x and the Ranger at 20x. The Ranger's wider field of view showed the cluster with a generous swath of dark sky surrounding, whereas in the Konus, the Pleiades filled up most of the field of view, giving much less of a cluster-like appearance. At 53x (51x) in the Konus (Ranger), both scopes gave could go equally deep in showing the fainter members of the cluster. When I replaced the full-aperture generic diagonal with the Konus constricted diagonal, the field of view noticeably narrowed, as expected.

The gibbous moon was the next object to be viewed. On this night, the terminator was around the area of Sinus Iridium. Cape Laplace cast a stark triangular shadow onto the floor of Sinus Iridium, with the tip of the shadow pointing to two tiny craterlets. The view was similar in both scopes, but the view in the Ranger seemed just a tiny bit sharper, and the edges of the shadows just a tiny bit harder, and during moments of good seeing, I could barely sense the presence of fine, almost imperceptible texturing that was not evident in the Konus. The two scopes were very close in performance, which was already surprising to me given the huge disparity in price, but the edge went to the Ranger.

Close double stars provide a good test of resolution, and the double-double Epsilon Lyrae is a classic test for small telescopes. At 150x (143x) in the Konus (Ranger), the wider pair, separated by 2.8", were easily resolved, with a strip of black sky between them. The narrower pair, at only 2.2" separation, was more of a challenge. The Ranger could split them with a hairline of black between them, but the Konus, with the generic full-aperture mirror diagonal, could only show them as an elongated pair. The Ranger seemed to be showing its superiority here. The results were identical when I put a brand-name prism diagonal into the Konus. Well, I thought, just for fun, why don't I put in that flimsy plastic constricted diagonal that Konus supplied, and see how badly the resolution deteriorates. To my surprise, the resolution improved, and the Konus could now resolve the closer pair in the double-double as well as the Ranger could! So, despite a constricted aperture, making it less desirable for a wide field of view, the quality of the reflecting surface in that flimsy plastic Konus diagonal was better than the two other diagonals that I tried.

Viewing Venus against a dark sky is one of the severest tests for chromatic aberration. In mid-December 2005, Venus was a stubby crescent in the evening sky. In the Ranger at 143x, provided by the 9.5mm Plossl and a 2.8x Klee Barlow, Venus was awash in a conspicuous purple haze, extending past the limb of the planet about the diameter of Venus itself. Lots of chromatic aberration here. In the Konus at 150x, provided by a 6mm Orthoscopic, there was only a subdued purple fringe. The Konus was clearly superior in color correction. This is perhaps not surprising for a f/12.8 lens versus a f/6.9 lens, but slightly disappointing considering that the Ranger with its ED glass costs almost a factor of ten more than the low-budget Konus.

In short, the Konus has a good lens mounted in a mediocre mechanical structure which may not be that durable due to the extensive use of plastic.
It is an excellent value for a novice wanting to try out astronomy as a hobby, particularly if he/she is able to make some of the enhancements mentioned in this review. The Ranger has a good lens which surpasses the Konus in wide-field performance, but which is inferior to the Konus in chromatic correction, mounted in a mechanically excellent structure which will last a lifetime. It is more suitable for a serious amateur astronomer seeking a high quality portable instrument.

This reviewer has no affiliation with either Konus or Televue.