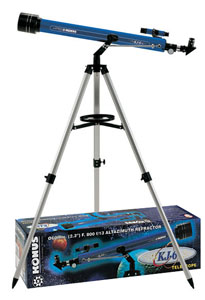 I guess there must be a special place in my heart for 60mm refractors. Or maybe it's just fond memories of the old Tasco that I had nearly 40 years ago. It was quite old then, when I purchased it used, and refurbished it. It was a marvelous performer and I now regret ever getting rid of it. Anyway, when I saw the Konus KJ-6 on an "after Christmas" sale table in early 2008 for $29, I had to take a chance.

I new it couldn't be great at that price, but I was impressed that the packaging did not have glaring announcements of high magnification. In fact, upon careful examination, the only place on the packaging where the magnification was even mentioned, was in small print on the back of the box where it simply stated the magnification with the two supplied eyepieces. OK, I gave them credit for this. It also had the added bonus that it came with an 'over the shoulder' carrying bag for the complete telescope with tripod.

I had a special use for this scope in mind. In one of my roles I am a NASA/JPL Solar System Ambassador. Something that I do quite often, is to work with the Boy Scouts and Girl Scouts, and with kids from various religious scouting programs, to help them obtain the qualifications for their 'astronomy' and 'sky watching' badges. One common requirement in many instances is for the kids to demonstrate setting up a telescope and then locating objects in the sky with it. For a price of only $29, I figured it wouldn't be that great a loss if the scope got damaged or destroyed. At least it would be far better than having one of my expensive telescopes damaged.

The optics are not that bad. I wasn't expecting much, but the objective is actually pretty decent. The achromatic objective is 60mm diameter with an 800mm fl for a ratio of f/13.33. Sure, chromatic aberration (CA) is there, but it's not that bad. Images of the moon and planets are quite sharp, and open clusters look like they should in a small refractor, nice small pinpoints of light on a velvety black background. The included diagonal is usable, but not great. Though the casing of the diagonal is plastic, it at least accepts 1 1/4" eyepieces and comes with a .965" adapter.

The rest of the scope is pretty much what I expected. They sure don't make them like they used to! The focuser is all plastic and had a lot of lateral side play. Of course, it also came with the usual dose of the thick grease that's more like glue, and hardens when cold. The focuser draw tube (and therefore the scope side of the diagonal) is .965". The scope comes with two .965" eyepieces, a 20mm Huygens and an 8mm Huygens. Take the 8mm and immediately toss it. It's junk! The 20mm is actually quite usable and gives a nice sharp 40X view of the moon and the planets.

The finder is small and practically useless. It uses the three screw alignment method, but the quality is horrible. The crosshairs are thick and were off center. The alt/az mount is flimsy and fairly unstable. No matter how hard I tried, I could not seem to get a good adjustment of the mount and keep the telescope balanced. It's just a poor arrangement. The tripod is aluminum and very light.

Also included is a "moon filter" of rather suspicious quality, and something they are calling a 1.5X erecting eyepiece. It's probably usable for terrestrial use, and that seems to be the way they intended it.

What I did to improve things...

The first thing I did was to remove and dismantle the focuser assembly. I carefully removed all traces of the original grease. Upon inspection, it appears that the only shim for the drawtube was a single piece of something like Teflon tape spirally wound inside the focuser. This was the primary reason why there was so much lateral play and shift. I carefully cut two additional pieces of "magic" type plastic tape and placed them inside the focuser, one to each side of the original tape. When the drawtube was reinstalled, the fit was much better and there was far less play. I reassembled the focuser giving the rack and pinion a healthy dose of White Graphite grease, and a very tiny amount of the grease on the drawtube. At least now the focuser travel is quite smooth with only slight lateral play. Even with the extra shims, it won't support heavy eyepieces.

The next thing that I noticed was that the the tube at the "scope end" of the diagonal was unblackened on the inside. I carefully applied a thick coat of flat black paint by brush.

Not much could be done for the mount except to clean off the old grease, apply some white lithium grease, and carefully adjust the mount for minimal play in the azimuth axis. I then filled the tripod legs with concrete to give some added weight and stability.

This definitely is not a scope I would recommend for a beginner. As it comes out of the box, it would discourage almost anyone. There are far better scopes out there for the child or budding beginner that will give far more performance and a better introduction to astronomy.

For my intended purpose with the scouts, it has worked out nicely. I would say it's definitely worth the $29 that I paid for it, but not much more. The quick fixes that I made helped, but it still is not very good, and it should not be expected for a beginner to do these. I wouldn't recommend this scope to anyone, unless you have a special use for it, as I did!

I have no affiliation with Konus and after this review, I doubt they will want to have anything to do with me. I have been a computer engineer and research astronomer for over 40 years that has worked on a number of NASA unmanned space missions, as a staff member at the Multiple Mirror Telescope Observatory (MMTO) on Mt. Hopkins in AZ, and as a staff astronomer at other smaller observatories. Co-founder of the “California Center for Astronomy and Astrophysics” (CalAstro).