I live in Turin, northwest Italy near the Alps (45-deg03' N , 7-deg 41' E) and I started stargazing more than twenty years ago at the age of sixteen, first with a pair of 16x50 Pentax binoculars and then with a Meade 826 20 cm (8 inches) newtonian reflector.

At that time I was living in the open country 30 km outside the city with rather limted light pollution and a house with plenty of space for storing cumbersone items like the 826.

Nowadays I live in downtown Turin, with much worse light pollution and only a small balcony at the first floor to look out to the night sky. My flat also has not much space for storing items. So I needed something much smaller than the 826 and considering the urban environments and its limits the natural choice should have been something like the ETX-90, but alas, when I stumbled upon an old Meade 2045 (4 inches SCT) which I had always desired in my youth, I bought it immediately.

To be honest it (the 2045) allowed me decent views of the moon and Jupiter and a few looks at Saturn and Mars, but on the whole I felt there was something not perfectly OK with it. When I used the small SCT during a Star Party on a mountain refuge at about 6000 ft, I was rather disappointed by the view it offered, so I decided to try a different approach.

Enter the ETX-80, short refractor, goto empowered RFT at an interesting price of 400 euro (certainly higher than in the USA, but that's usual for telescopes in Europe): I thought it could give me a different, low power, half-binocular like, view of the heavens, so I bought it.

The telescope arrived in a sigle cardboard package about 90x25x100 cm rather light (about 10 kg), with colourful images printed on it: nice appearence on the whole. Internally it was much simpler, but neat, with the scope, the tripod, a useful bag for tripod transport, two Meade 4000 Plossl with a "DS Series" mark on them, obviously made in China as the whole package, a bubble-compass for the level north process, the Autostar 494 and a printed manual in English, all of them contained in crude cardboard sub-packages.

The mount and the tripod.

My previous experience of a scope this size was with the all metal-really sturdy Meade 2045 from the early 90s, so grabbing this all plastic, very light telescope gave me a first impression of flimsyness, which was not dispelled by the ultralight tripod (maybe 1 kg weight, maybe less).

This first impression notwithstanding, as soon as I started to use the ETX-80, I started to appreciate its extreme overall compactness, that allows me to store it easily in a corner of my flat's small vestibule, and its reduced weight (something around 5 kg telescope AND tripod), so that it can easily be moved around (already placed on its tripod) with just one hand.

Tecnically speaking the mount is an altazimuthal fork double tine, motorized on both axes and equipped with the Autostar 494 computer; it hasn't a RS232 port and cannot be, as it is, directly commanded by a PC with the Autostar Suite installed (a Meade #506 optional cable is required to achieve that), but this is not a problem for me.

The only mildly serious reproach I can blame on the mount is that the DEC axis almost immediately gained a looseness, which nevertheless has not so far impaired visual use even at high magnification nor imaging with the Meade LPI at over 2000 mm focal length.

Sincerely I can't explain this to myself: there is an unmistakable backlash but it cannot be perceived during observations. My previous experience with similar loosenesses was that they had noticeable effect on telescope operation. 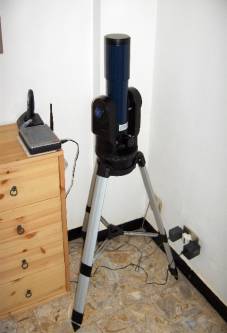 This is the first time I try a GoTo telescope after years of starhopping and planetary viewing and even imaging without motorized tracking, and I must say that for all what the purists can object, GoTo is a great thing. When you have maybe ten to fifteen nights a year to observe under a decent nightsky you want to spend your precious time observing and not searching for, or, even worse, battling with a misaligned and not very performing 6x30 or 5x24 finder.

Autostar 494 is the simplified version of the 497 equipping higher priced Meade telescopes, it has "only" 1400 objects in its database and less memory for user defined object, but it works great. Alignment requires that you put your scope levelled to north with the help of the included bubble-compass, but you must remember that magnetic north is not celestial north and you should better know the difference in degrees at you observing site.

Then you can choose one or two stars alignment: of course two stars allow better results, but I' ve verified in my urban environment that one star alignment is enough as long as you search object about 30-40 degrees around your orignal alignment star and even better results can be achieved periodically resynching on each new object you have just "gotoed".

Resynching is as easy as pressing for a few seconds the enter button on the 494 hand controller, center the object possibly in a medium power eyepiece and then press enter again: this procedure improves the precision of Autostar's "knowledge" of the sky map.

With two stars chosen at 90 or more degrees apart in the sky and carefully centered in the field of a medium power eyepiece (66X) you can obtain a GoTo initial accuracy of about 20 arcminutes or even less, but to maintain it, you have to resync frequently.

Autostar and motors are operated by six AA batteries (I use the NiMH 2600 mAh rechargeable type), which up to now have granted 7 hours of operation at 0-degC (32-degF) or less and are still running.

A fast (f5) achromatic doublet should be synonymous with chromatic aberration, especially in a rather cheap realization like this, but this little nice toy has really surprised me. The lens is bluish and Multi-Coated is printed on its border; its diameter is 80 mm and 400 mm is its focal length. Focus is reached moving the primary and not the diagonal-focuser block, which is, I think, rather unique, but it does work. The focuser requires a lot of turns to focus with non parfocal eyepieces, especially when you use the builtin flip Barlow, but it is now placed parallel to the 31.8 mm (1.25 inches) barrel, much more comfortable than in the old ETX-70.

The scope has also a flip mirror for photographic purposes, but I suppose that attaching a T-adapter and a DSLR to it would be too much for the DEC clutch. No dew shield is given with the telescope in this version (it's present in the BB version), but it's dearly needed as soon as you find yourself in a moisty environment. 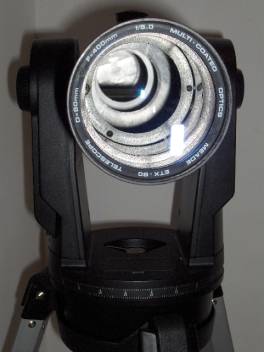 First light was under the moon after a week of "New Telescope Curse": it was a night of good seeing (I-II Antoniadi) and I tried immediately to test chromatism and magnification. Here came the surprise:while at about 16X with the Meade 4000 SP 26 mm chromatism was outrageous around the terminator, it was less and less so rising up with magnification. Using the internal Barlow and a Skywatcher 6 mm UWA I obtained 133X: at this magnification the view was sharp with hints of a yellow-green halo only on the twilight zone of the terminator and details were seen inside Clavius (which was out of the terminator) that I had never seen with the Meade 2045 SCT.

More recently I could finally try the ETX-80 on Saturn (sadly only 20 degrees high above the horizon) at 133X with the builtin Barlow and the usual 6mm EP in a night of shoddy seeing: I could barely have a glimpse of the Cassini Division and of the planet-rings shadows, very weak and unstable, but, most important, even without a Fringe Killer filter, I couldn't perceive any blue haze around the gas giant, so chromatism, at least in my perhaps lucky sample, is not a problem as big as it should be according to the lore. Or I've Chromacorr in my eyes and I don't know?

No, it is not, because you must think to your scope as half an astronomical binocular when turning to DSO and we all know that astro binoculars are no joke.
Exploiting two nights of good transparency in a suburban location with a naked eye magnitude 5 sky and the fast searching capabilities of the GoTo, I have observed the following objects:

To this palmares we could add NGC752, the Double Cluster and a bunch of other open clusters, while an attempt to see NGC891 has failed but maybe it was too much to pretend.

Of course the galaxies and the planetary nebulas were a different show in my old 20cm reflector, but the open clusters are a much more exciting view in an RFT and in any case and concerning any of the forementioned objects, the ETX-80 afforded better views than the 2045 SCT.

As an example M1 could only be perceived with averted vision with the 2045 at 50X, while the ETX-80 allowed direct vision at 42X.

I've used my Meade LPI to image the Moon with the ETX-80 and also to try to capture the core of M31 from downtown Turin (crazy experiment). You can look with your eyes at the results: Copernicus has been imaged with a focal length of 1600 mm stacking about 20 shots with the Meade Envisage software but without tracking, while M31 has been imaged stacking 15 seconds exposures for about 3 minutes and of course with tracking.

Certainly the outcome on M31 is poor, but do not foget that it was obtained with a camera designed for other tasks and in a seriously light polluted environment (street light 12 feets in front and above my observing site). 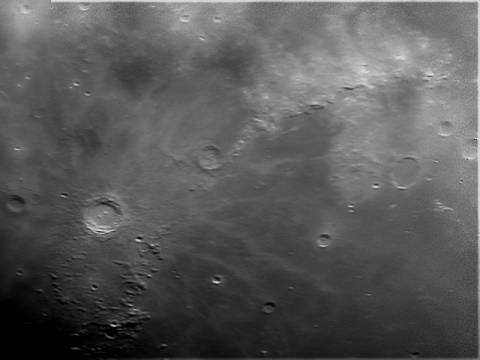 Copernicus on lower left in this LPI image at 1600 mm focal length. 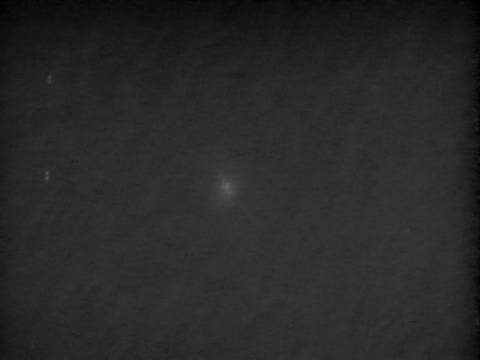 A last note concerning the two Meade 4000 "DS Series" EP given with the scope: their appearance and the "Made in China" mark may seem to put them on a lower level than those sold separately, but since I own a 9.7 mm Meade 4000 SP Made in Japan, I can say that direct confrontation between the pair hasn't evidentiated any apparent deficiency of the "chinese specimen". As for what concerns the 26 mm EP, I've found it rather corrected except for coma in the last quarter of the field before the border. But considering the low magnification and the wide (3-deg) field, all in all I think it fulfills honestly its task.

As a conclusive word to my review, I can't but promote the Meade ETX-80 as a very comfortable grab and go RFT for binocular like DSO view, which delivers unsuspected performances in the lunar-planetary range, well above and beyond the limits of a bino.


I share no vested interests whatsoever in Meade Corporation, but certainly I do appreciate they products since a long time, so it's right that you know that certainly I've no bias against Meade.