I am a veteran observer and a dedicated Cloudynights user. We should all give Astronomics a big hand for this wonderful playpen of ours. My username on the site is thesubwaypusher, and I am primarily a visual observer. -Although I occasionally dabble in astrophotography with my Canon 40D. The scope being reviewed was designed more for imaging, which I discovered the hard way. Here is an HONEST review of the new Takahashi Sky-90sv Fluorite Apochromat. Its purpose is to aid fellow amateurs in their decision if they are contemplating purchasing this scope. I love to give back when I can because these reviews have always helped me immensely.


I used to have a Vixen 80ss that took great images on the back of my 7"LX200GPS. (Please bear with me as I will occasionally compare the high-end Sky-90 to this (great) Vixen cheapo.) The 80ss would grab galaxies and other deep sky wonders out of the darkness with sharpness and clarity. Of course, because it was an inexpensive achromat, therewas false color and coma, and it didn’t handle power well-which never particularly bothered me because I paid just over $200 for the scope brand new. Because of the coma and a recently negotiated raise for NYC employees, I thought I would treat myself to a nice high quality refractor that could take images like the Vixen, but also give me well-resolved views of the moon and planets when I didn't feel like lifting the heavy 7”. I also wanted versatility to allow me to piggyback the scope to take images with my Canon 40D. The new short Tak looked promising.

So in the fall of 2009, after much research on many small scopes, I settled on the Takahashi Sky-90sv. It was $2100, plus these accessories, none of which I ever needed for the Vixen, I might add. 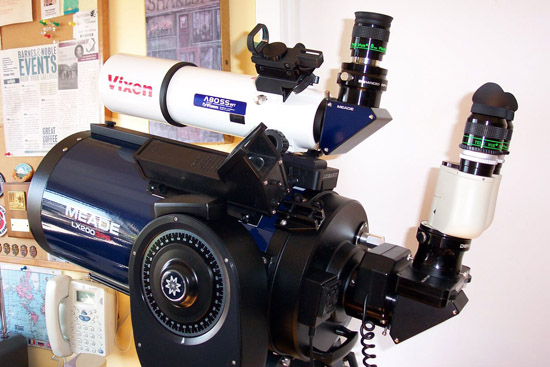 So the entire package (no diagonal or eyepiece) was $3,660 + shipping.

I assumed before I made the move that this gem would exhibit a flat field (despite the wide light cone) with no attachments even though it is a fast doublet. I mean, why else would it be so expensive? This from a guy who is by no means a tightwad. I am actually very (too) loose with my money-my mother always telling me I had no idea of its value. And I was 35 all those 14 years ago, but that’s another story. -When I posted my first coma concern - seeking guidance on the Takahashi Yahoo Groups forum, I received understanding from a few nice folks, but from one user I was told that expecting a flat field was an “unreasonable” expectation with that type of scope. Unreasonable? For that kind of money??? For a scope of a mere 90mm??? I have since resigned myself to the fact that the Sky-90sv is flawed (deliberately undercorrected for astrophotography) in that respect. And as Dr. Phil would say, “I get that.” But I’m still waiting for my check of about a grand to compensate me for what this scope lacks in visual performance. You see, Takahashi never displayed a disclaimer that the scope is inadequate visually, so how was I, or others who are visual observers, supposed to be warned? Having an open mind and free medical benefits, I immediately underwent a full eye examination. They were/are perfect. No uncorrected astigmatism. And my exit pupil is the same as everyone else’s. I find that folks that own Takahashi equipment (the Sky-90 anyway) are in a sort of denial about how much money they have spent and how “great” the scope is. Indeed, I could have gotten the same performance and aesthetic “beauty” (if you consider lime green beauty-I happen to think it's ugly compared to other offerings) from other scopes that are a third of the price. I sincerely do not see anything special to warrant the outlay for this setup, given the aberrations inherent in the design. In fact, I feel downright insulted by the entire escapade, and kick myself constantly for not going with my second choice, the NP-101. It wasn’t until I discovered the coma anomaly that I searched the Yahoo site for that specific issue. I found pages and pages of coma problems relative to the Sky-90, so rest assured it’s not just mine. At this point I should mention that if you are only going to use the scope for AP, then you will have quite an excellent and totally satisfying rig on your hands.

When I received the scope, it was just as many said it was going to be. Packed extremely well and very well built. However, I didn’t deem it any more well built than my Vixen 80ss. In fact, the Vixen is more attractive, and the focuser moves more smoothly (from day one until 2 years later) and easier so the entire scope doesn't have to move when you turn the knob. I found the Vixen to be as strong as the Tak as far as carrying weight on the end of the drawtube, and to the day I sold it, had no backlash whatsoever. The Sky-90 had a dew shield that was chipped, (the Vixen always perfect) and Art at Texas Nautical Repair sent me a new one even before I sent the old one back. Whatever I may claim about the Sky-90sv, make no mistake that the service at TNR is absolutely great. Not just me, but many, many users of Tak scopes are extremely pleased with their personalized U.S. support through TNR. However, you have to wonder why these overpriced instruments need so much service. The Sky-90 models are notorious for being out of collimation, and according to the Yahoo site, are constantly (maybe too strong a word) sent in for adjustment. Art graciously suggested I speak to TNR’s expert, Fred, and I have.

First light - from my notes - I'll not bore you with an object-to-object description:

I immediately noticed that the field with my 22mm Nagler was exhibiting seagulls outside of the inner third of the frame. I figured it was field curvature, something I would have to deal with since it was the fault of the Televue eyepiece, and not of the scope. But then the same thing on a Televue 25mm plossl, 32mm plossl, and another 25mm plossl. What gives? These have 50 degree fields! So now I'm thinking, man, this is the same as the Vixen! I then tried it with a Denk diagonal and an Everbrite diagonal, then with no diagonal. With and without the Extender-Q. Same results. Then I grabbed a view of the moon and it was tack sharp for a 90mm scope. I knew the collimation could not have been off with sharpness like this. I invested in a Cheshire and a Vixen 2.5mm ocular ($200) just so I could check it and as I suspected, it was dead on. At this point, I was pretty miffed because I can't use the scope with my favorite eyepiece, the 22mm Nagler, not to mention any other eyepiece without dealing with comets flying into the edge of the field. And I was looking forward to purchasing my first Ethos!

I know every telescope has compromises, but really-for this kind of money? Luckily, (I use the word loosely,) I use binoviewers with 19mm Panoptics most of the time, and the coma in this situation is hardly noticeable. And it's a big plus that the Extender-Q allows viewing with only a 1.6 increase in mag., and not double, like the Vixen and so many other refractors. I will not forget to add that the views through the Tak with binoviewers of open clusters are very fantastic – graced with a black background from all that velvety baffling. I will also not forget to mention that I removed the binoviewer setup and transferred it to my $200+ Vixen which was feet away and the view was still fantastic, albeit a bit less contrasty. And the flaring in the Vixen also began a bit nearer to the center of the field.

So my opinion and the general consensus regarding the Sky-90sv is that it is a very high quality instrument. The views of the moon and planets of course come nowhere near my Meade Mak, but for a grab and go scope, it does a great job WITH BINOVIEWERS. If I had sifted through all the (accurate?) accolades on this scope and found the coma issue, I definitely would not have purchased it. I would have gone with a corrected scope of more elements and a longer focal length-since I have the Extender-Q on all the time anyway. In fact, I would sell the Sky-90 now if I were not going to lose so much in the process. I already sold the focal reducer and adapters because the drawtube comes so far back that it completely throws off the balance of the LX200. The Vixen never did. I plan on using the Sky-90 without the FR/FF and the Canon inside the Everbrite and deal with the resulting coma. At least my scope will be balanced and the camera won’t be in my face while using the Mak. It will even be at a right angle like it should be-never needing to be spun around constantly with a camera angle adapter. But, like all else pertaining to this scope, everything is complicated. The camera will not come to focus in this configuration, so now I either have to track down ANOTHER adapter, or file some of the existing adapter off, as all I need, it seems, is about four millimeters of infocus.

The wide-field performance of the Sky-90sv is just about on par with the cheapest achromat, although color on the cheapie would be blatant, especially on chips. The Sky-90 has better contrast too, but I really had to run back and forth and tightly focus and tightly focus and tightly focus to discover this with the Vixen. It’s only when you use binoviewers or plan to use the scope as a serious astrophotography tool that you will be very pleased. If you’re one of those guys that doesn’t notice comatic flaring, I guess you can just disregard this review and go to one of the others that just don’t even mention it. It’s difficult to see bad things in a high-end instrument after you pay thousands of dollars for it. It’s supposed to be the best. What can be wrong? -Believe it or not, I have come to love my new Sky- 90sv. The package is wonderfully portable and convenient to use. And it’s nice to own a Tak. As long as you develop memory loss as to how much you unnecessarily spent on your new setup.

At this point, I realize it’s not the scope that’s horrible. It’s the amount I paid for it.

Pros: Cons: Good luck on your decision and clear skies! (More pics below) 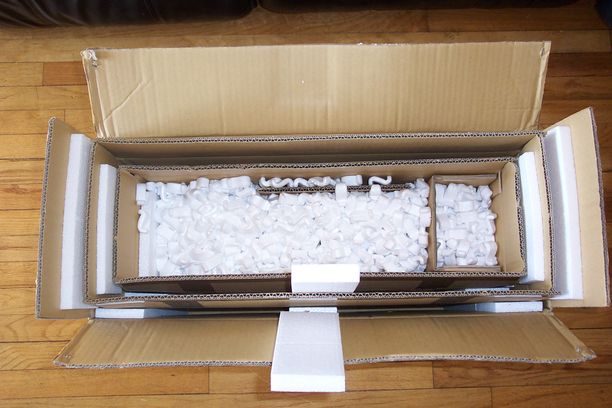 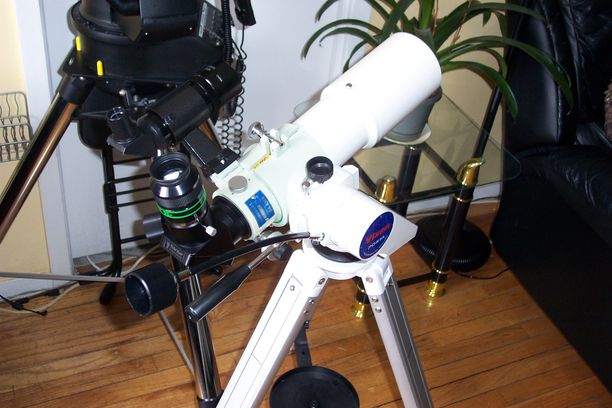 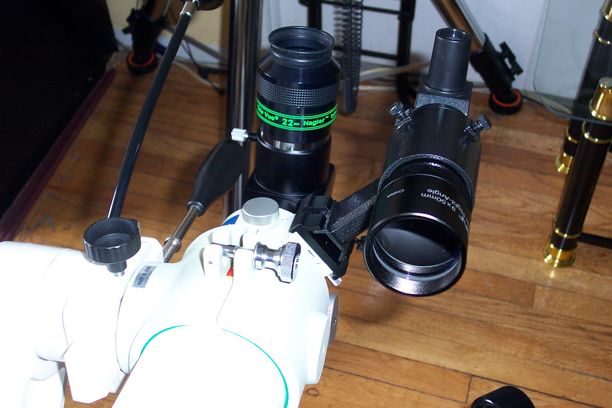 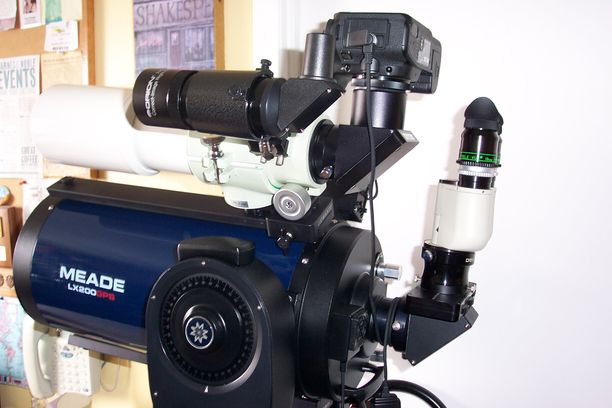 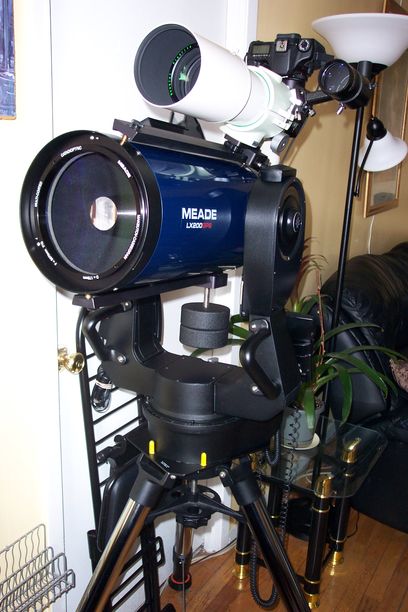