In 1969 the US had just landed two men on the moon. A whole slew of space probes had visited other planets and more were on the drawing board. Science was important and along with it, a good science education. Toys such as chemistry sets and microscopes were very popular. High on the list of “must have” science toys was the telescope. For Christmas 1969 one us (GD) received a Tasco telescope, which is shown in Figure 1. The advertising on the side of the box (see Figure 2) was clearly aimed at concerned parents and reflected the times. Science didn’t come cheap as shown by the price tag in Figure 3: adjusting for inflation rate gives a cost of $135 in 2003 dollars. 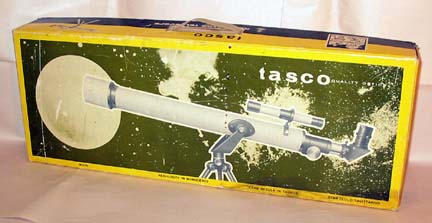 Figure 1. The Tasco Cosmic 50 mm refractor in its box.

Figure 2. A sign of the times. One can assume that the same picture was used for microscopes. 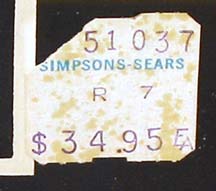 Figure 3. The price tag, in Canadian dollars, was still on the box. In 1969, you could buy 100 gallons of gasoline for $35. Note that in 1969 the Canadian dollar was worth a few cents more than the US dollar.

Opening the box (Figure 4) reveals the prized toy: a 50 mm refractor. It is easy to assemble and looks like a proper telescope (Figure 5). It’s a small scope as indicated by the specifications shown in Figure 6. Unlike modern scopes, there are no plastic components. A black crinkle finish is applied to the mount and prism whilst other components are a satin black or white. The tripod is a simple table-top affair and lacks slow motion controls.

Figure 4. The contents: looks like it’s all there even after 33 years. Note that the model number is molded into the Styrofoam insert. 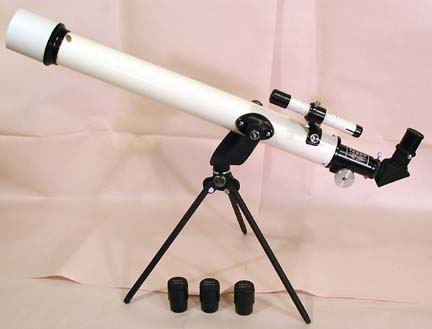 Figure 5. It looks like a proper telescope. Only the eyepiece cases are made of plastic. 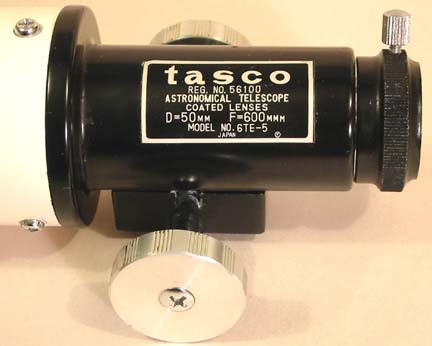 Figure 6. The label tells most of the story. Note the nice aluminum focuser knobs.

Luxury – the scope is supplied with three eyepieces instead of the usual two (see Figure 7). Also included is a sun filter that shouldn’t be used because of the risk of eyesight loss. Stray reflections are contained by two baffles: one located in the focuser tube and one (unusually) in the prism diagonal. Black paint on the tube’s inner wall helps reduce reflections. Scratches in the black paint suggest that this telescope once had a third baffel, which was removed long ago. The focuser is a rack-and-pinion mechanism with rather attractive aluminum knobs. A small finder scope completes the necessary optics. A label, shown in Figure 8, indicates that the optics passed some level of quality control. 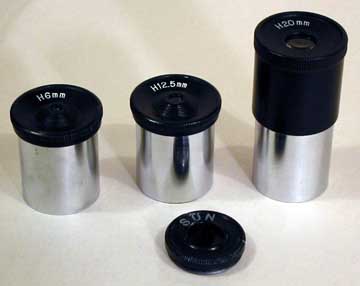 Figure7. Included with the scope were these 6mm , 12.5 mm, 20 mm eyepieces as well as a sun filter. These sun filters should not be used since they become very hot and can crack resulting in loss of eyesight. 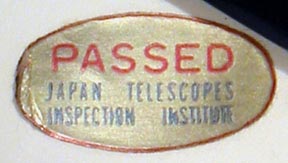 Figure 8. A quality control label. A review of a Carl Wetzlar 60 mm refractor (also on CloudyNiights) shows a sticker by the same institute.

The tripod is solid steel and is heavier than one might expect resulting in a stable telescope. The altizimuth mount is very simple but works quite well.

The optical finder scope is very small with no internal baffles or black paint. In spite of having a simple sliding lens focuser, an in-focus star image could not be obtained. Sighting on the moon presented in a huge amount of stray light. However, the telescope is so small that a finder scope isn’t needed.

Star testing proved to be difficult because the defocused images were very dim. In-focus star images looked a bit like Saturn. Out-of-focus images were strongly elliptical with the major and minor axes maintaining the same orientation on either side of focus. Removing the prism diagonal improved the image quality a lot. Unfortunately the focuser didn’t have enough travel to achieve focus without the prism in place.

The focuser is a rack-and-pinion design that wasn’t machined as well as it could have been. Consequently the teeth had worn and it no longer functioned. Fortunately, it could be repaired in the future.

Importantly this telescope is very easy to use and its small size makes it easy to carry around. Other than the bad diagonal, the main limitation is that the aperture is just too small. Even bright stars appear dim. However, it’s a cute little telescope. Was it a good choice for introducing a child to astronomy? Perhaps, but for the money it could have been better.

Since posting the original article, we have received a couple of emails that are of interest because they tell more of the story about this little telescope.

Dr. Rickey, thanks for the fine piece of nostalgia. It was Christmas of 1967 (I was 12) when I received my Tasco 50 mm white tube refractor. It too was my first telescope and purchased from Simpsons Sears for $49.95. It was more expensive because it came with a floor length tripod. It was a lot of fun and certainly propelled my interest in astronomy (I now use a Celestron 9.25 SCT on a Go-To mount). I especially appreciated your pictures. It brought back a lot of memories. The plastic handle on the cardboard box came in handy one day when I had to carry it to school in Montreal for a demonstration to a 5th grade science class.

I hung onto it for about 2 years then my dad sold the Tasco to a friend of his at work. It was followed by a 6 inch reflector when I was in 8th grade. Carrying that little 50mm around to relatives and friends was a blast. It came with a 3x barlow so it used to boast of being capable of hitting 180 x. I remember my first glimpse of a crescent Venus was quite fascinating.

To answer your question, I am a Chaplain in the United States Army and my graduate degrees are: Master of Arts degree in Religion and Doctor Of Ministry degree in Pastoral Counseling.

Thanks again for your article.

I was surprised to see your Cloudy Nights Telescope reviews article on the Tasco Model 6TE-5 500 mm Refractor, my first telescope. Though mine was also bought at Simpson Sears (Montreal), the label was Simpsons not Tasco. I still have the instruction manual (sheet of paper) if you are interested. I think I received it in 1967 (my 10th Birthday present). I think that gift sent my down the road to a life in science. I switched to microscopes a little later and have worked in Virology for the past 23 years. I have used my old telescope off and on since that time. In fact it still provides good images of the Moon and the larger Planets. I used it to view Mars this summer.

Here are some photos of the telescope I have used. I think it was bought at Simpson's (not Simpson-Sears)at Fairview Shopping Centre on the West Island of Montreal. 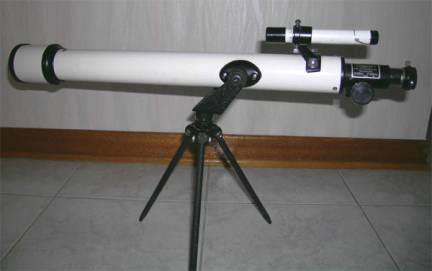 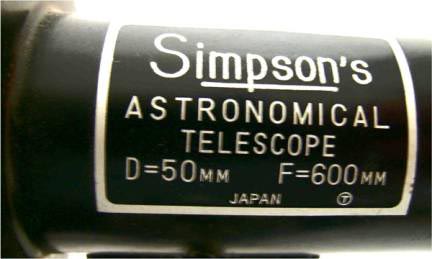