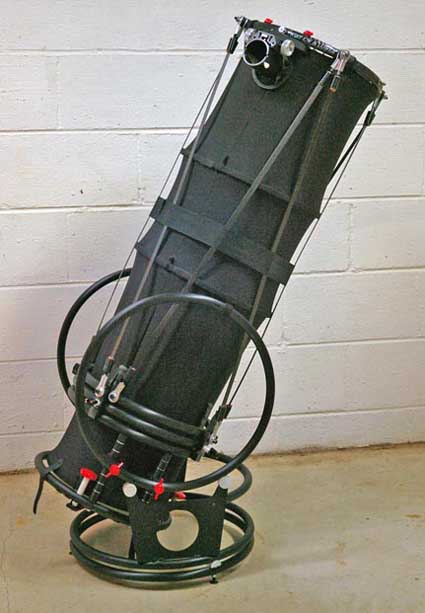 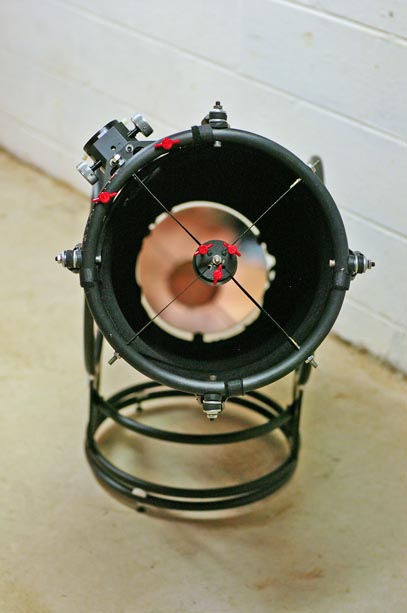 After many years of observing with a C-14 a recent back injury has forced me to downsize. Seeing the write up of the 10” Pop-up in Sky and Telescope’s “Hot Products” (January 2005, page 110) I decided that this scope would be an ideal complement to my computerized 5.5” refractor and would provide decent aperture while avoiding back strain. Its elegant design, light weight (19 lbs including mirror and focuser!), and compact size make it a perfect scope for my needs. I am a long time amateur astronomer ( four decades) and have owned many telescopes, from department store refractors to high end refractors and a 15 inch Tectron dob. I am not in any way connected with the manufacturer.

The 10 inch Johnsonian “Lite-Bucket” is a joy to use and has very few shortcomings. New pricing ($1295 for the 10”, $1895 for the 12.5”) make the scope far more attractive and competitive with heavier alternatives.

Given the already steep price at the time I ordered my scope I took a chance on the standard optics (not the premium optics). Recent changes to the line make premium (12th wave claimed) optics standard. That said, the “Lite-Bucket” optics on my scope are excellent—certainly diffraction limited, probably better than 1/8 wave at the eyepiece. Views are sharp and contrasty and the scope will take power. The whole scope fits in a 14” snare drum soft case. 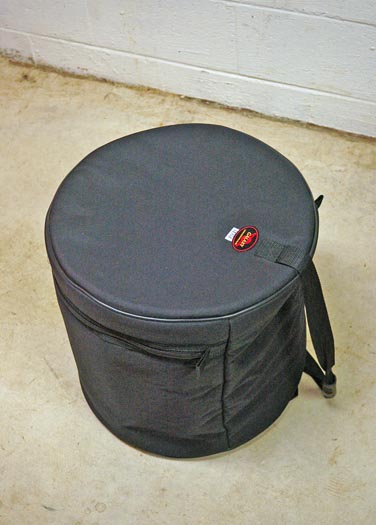 Unpacking, set up, and take-down should be done carefully. While the process is not difficult, doing it incorrectly may lead to scratches and so forth. I suggest new owners assemble and disassemble the scope a few times in daylight. At the recent Stellafane convention people stood by watching, mouths open, as an entire 10” telescope emerged from the small case in a matter of a few minutes.

The mirror cell, base, rocker box, and altitude trunions, and parts of the tube assembly are constructed of two sizes of light weight aluminum wheelchair tubing. The cell is a simple design consisting of three pieces of aluminum with felt padding. 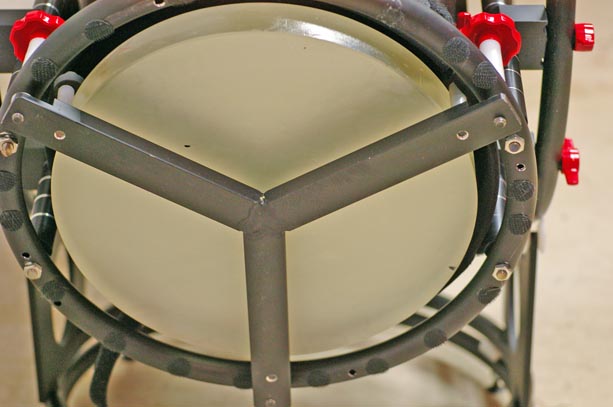 Though theoretically the mirror is a bit too thick for a three point cell (six points would be better) no problems are apparent in actual use. The struts of tube assembly are carbon fiber, and this minimizes weight and allows the entire “tube” to be folded flower petal style. One point I had some concern about was getting “four point contact” on the altitude bearings. 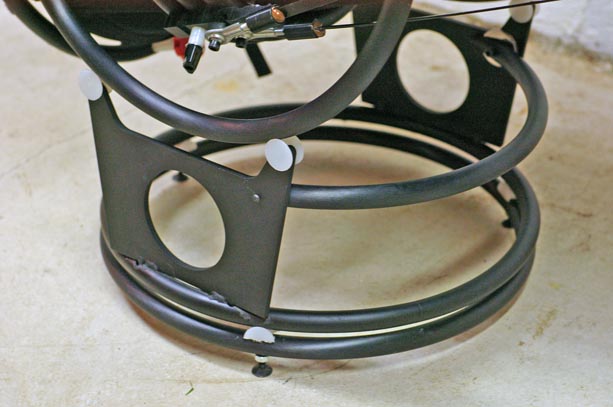 There is a certain trick to this, involving careful resetting of the trunion clamp catty corner to the bearing not making contact. 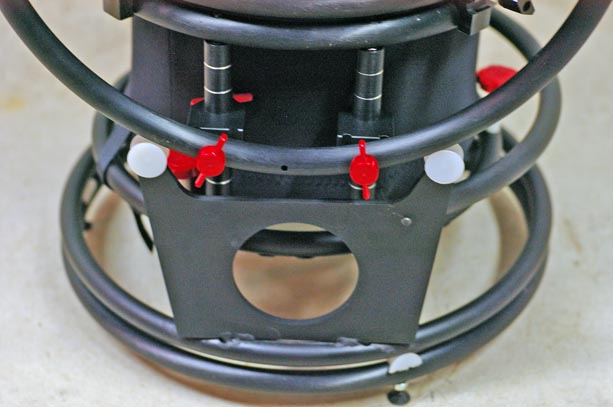 The scope moves fine even if one of these points occasionally is not in contact with its bearing. I finally added a spacer to one side of the rocker box and the problem disappeared. Both altitude trunions can be moved relative to the truss tube, allowing rebalancing of the scope for heavy eyepieces. I have preferred to leave the tube at one setting, since it can be tricky to get four point contact and instead attach leg weights by Velcro to the bottom of the cell.

Once set up the scope is very easy to collimate and it keeps collimation well despite repeated assembly and disassembly. It usually requires only minor tweaks of the primary. Collimation is especially easy when operating open frame without a shroud. Having the shroud on necessitates a little more effort since one cannot then tweak the collimation bolts on the primary while looking at the laser target. The focuser is a JMI reverse crayford. Its movements are adequate but not really smooth and it comes with steel thumbscrews that mar eyepieces and diagonals. I replaced my thumbscrews with nylon ones. Johnsonian does offer focuser upgrades. The scope comes with a generic red dot finder that I replaced with a Starbeam that was going unused in my closet. To make take down easier I remove both the finder and its mount from the secondary ring. It must be remounted and aligned each time I set up.

Since I purchased my scope Johnsonian has added several refinements. The original shroud fit on the outside of the tube. While it was effective it was also ugly and the fabric tended to catch on the knurled focuser knobs. The new shroud fits inside the trusses and incorporates stiffening rings that, along with a large elastic cloth band provide the necessary rigidity to the carbon fiber struts. 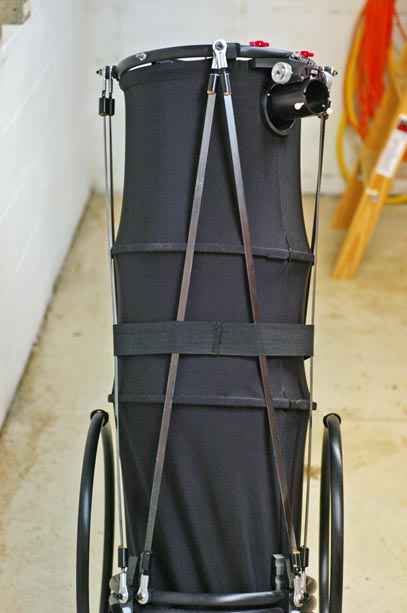 This new shroud is attached by Velcro to the secondary ring. Oddly, the bottom ring of the shroud just hangs about an inch and a half above the primary and can, at some angles, get into the light path. I simply sewed Velcro straps to it and it now fully surrounds the primary. New taller collimation bolts avoid running in to the mirror hold down bolts. 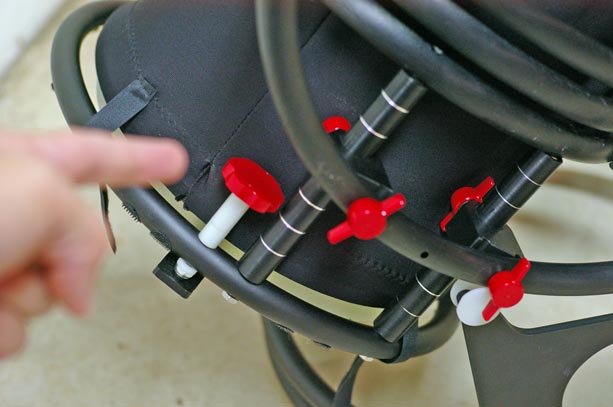 There are also new azimuth bearings. The originals do fine on a flat surface, but if the scope is used on an incline it had a tendency to jump its tracks, so to speak (Johnsonian has promised to send me upgrades, but I have not yet received them so I have not been able to test them). The ground ring has three small screws for feet. You will need something to put them on to avoid sinking into the ground. In my case I have a small table that I put the scope on and this also puts the eyepiece at a more convenient height.

Having previously owned Newtonians I was aware that collimation could be a bear. The easy to use primary and secondary knobs on the pop-up obviate this to some extent. A “pin” on the tube assembly fits into a hole on the mirror assembly so that the scope remains roughly collimated even though disassembled and reassembled. I also invested in a barlowed laser. Now my collimation is usually completed in less than two minutes. The high sensitivity of the barlowed laser makes apparent minute amounts of flex in the structure as the scope is pointed from low to zenith. Tweaking the stiffening band and rings can eliminate most of it. Indeed, even when the laser showed a slight deflection, no aberrations are visible at the eyepiece. To complete my set up I added a home-made foam dew shield for the secondary.

In use the movements of the scope are smooth and any stickiness can be alleviated by periodic applications of car wax. I’ve done this once. Unlike most dobs this one is very light and moving it takes a light touch. Working with the shroud the scope, like many light dobs, is susceptible to wind. Working open truss this is not a problem, but in many parts of the world observing would soon be cut short by dew. Also, the scope can vibrate when adjusting the focuser, but these vibrations dampen out quickly. When moving the scope I usually grab the upper end of one pair of struts where they are fastened to the secondary ring and grab the altitude trunion with my left hand. The stability of my scope has benefited from the addition of the running weight at the back of the primary, making it less wind-blown and offsetting the weight of my coma corrector.

Finally, the scope comes with a DVD illustrating assembly, operation, etc, as well as a hardcopy manual. I usually leave it set up in my basement and simply carry the whole thing outside for observing. All in all I would have to say the design is both elegant and sound and that the scope provides extreme portability with serious aperture. wwww.johnsonian.com