I purchased a 15” Obsession from owner David Kriege on January 12, 2007 and took delivery in the first week of March of the same year. Since that time it has been my principle telescope for visual use. For comparison, I have owned two Takahashis (FS-102 and TOA 130), three Televues (TV85; NP127; TV85 again), a WO 10th anniversary 80mm, an 8” Celestron SC with Starbright coatings and a 6” Orion dobsonian. 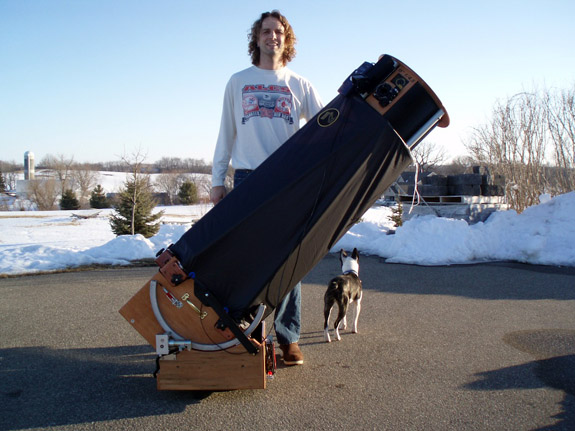 The 15” Obsession: Boston Terrier not included.

Despite the demonstrated affinity I have for apochromatic refractors, I had been to enough star parties to learn that aperture ultimately wins. I began in astronomy as a star-hopper, but only out of economic nccessity—I think GOTO mounts are wonderful, particularly for sharing the hobby with less proficient viewers. A few years ago, I started researching Tak Mewlon’s, thinking that this would be a great way to combine aperture with premium optics and build quality. From what I understand, my thesis was correct, but the price tag for a Mewlon and mount promised to be more than I was willing to pay. About this time, I learned about ServoCat, and figured out that I could purchase a large dobsonian rigged for GOTO and tracking for about half of the cost of a Mewlon system, with the added bonus of nearly twice the aperture. These, then were my final criteria:

In the end, I chose the Obsession 15” with ServoCat/Argo Navis as a good fit on all of these points. Specifically, this was the largest, lightest scope that I could operate without a stool or ladder (I am 6’3”). Dave Kriege was quite helpful in choosing the options and explaining the set up. He delivered the scope in substantially less than the estimated eight weeks.

The short version is that this is a very good scope—a pleasure to use and a comparative bargain for visual astronomy compared to any OTA/EQ system out there of comparable size.

The longer version is that “very good” and “obsession” are words of differing degrees. Mr. Kriege advertises a Rolls Royce and delivers a Cadillac. The particulars:

Those interested in purchasing a larger dobsonian may wonder what you see in a 15” scope. Having compared views with everything from 60mm refractors to a 30” dobsonian, I can honestly say “more than enough to keep you busy for a long, long time”. Globular clusters really seem to take life at about 12” and galaxies are already more than nondescript smudges by 15”. Of course local conditions make a huge difference. I have had nights with a 5” refractor that gave the 15” a run for its money. I have been at start parties looking at a galaxy in the 15”, then wandered next door to a 24” expecting to be utterly blown away by the difference and then been surprised by how little there was. That said, on any given night, the 15” tends to beat the socks off my small refractor nearly every night across the board, from planets to wisps.


My intention in this review was to hold the Obsession up to the high standard to which it lays claim. I can honestly say that the Obsession nearly lives up to its name. With a little more effort, Dave could deliver a flawless scope. Instead, he delivers one that is just very, very good. I am obviously a critical consumer, but I am happy with my purchase. Overall, I applaud the Obsession line, and I hope that Dave will continue to improve his products to live up to their name.

A final note: where should the mirror live? In the Obsession, the primary mirror is held in a sling cell which Dave claims provides for better performance. In other premium dobs (e.g. Starmaster), the primary resides in a removable cell. In retrospect, I think I would have preferred the latter. Leaving the mirror in the scope means heating the scope base (with a 15W light bulb) year round to prevent daily dewing. Not a major hassle, but the bulbs burn out eventually and this is not always noticed immediately. A removable cell would have obvious advantage for those who transport often (I don’t). On the flip side, with the mirror always in the scope, it is ready for action on a moments notice.