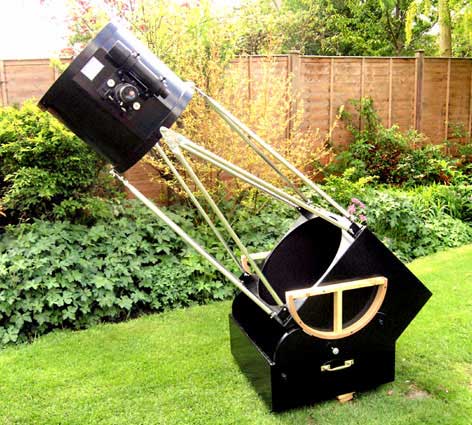 I have been an amateur Astronomer since I was eight years of age. I previously owned a 12-inch f/4 equatorial reflector primarily used for deep sky work. Recently I became interested in acquiring a larger telescope for extensive deep sky and detailed planetary observation. I was confident that upgrading to a 16-inch Newtonian would provide major benefits in terms of additional light grasp and resolution, especially during moments of excellent seeing. In particular, I was searching for excellent optics and understood that advances had been made in terms of current manufacturer offerings. At the same time I was also looking for a portable instrument which would not require use of a ladder. I came to the conclusion that a high quality Dobsonian with relatively fast optics would best meet my needs.

I was considering buying a commercially available Dobsonian but soon discovered that my initial choice would require expensive building alterations in order to fit the telescope through a standard size door for storage purposes. I was also becoming increasingly uneasy about having to rely on random quality mass-produced optics. These factors influenced my decision to look for an alternative.

After making several enquiries with a number of UK manufacturers of large Dobsonians I came across Norman Oldham of Oldham Optical (www.oldham-optical.co.uk) in Scarborough. Norman has a growing reputation for making premium mirrors and offers optional 1/10 wavefront ptv diffraction limited optics in addition to his standard 1/4 wave product. Norman works with different Dobsonian telescope makers including David Lukehurst (www.dobsonians.co.uk) in Nottingham. After contacting David and seeing that he could fulfil all of my specific requirements in relation to the telescope mount, I made a decision to order a 16-inch f/4.4 truss tube Dobsonian with 1/10 wave optics.

The telescope was completed on schedule, approximately three months from placement of order. Since collecting the telescope, I have had six months to make extensive use of this instrument and believe it would be worthwhile to highlight some of my key findings in this review for the benefit of other amateur Astronomers. I have no undisclosed interest in the vendor or product.

My first impression when I saw the telescope in Nottingham was that it had been hand crafted to a very high standard. The mount has been carefully sealed and painted. High-grade exterior plywood was used for the lower parts of the telescope, that is, for the mirror box and rocker box. This 18mm waterproof plywood was also used for the upper section, laminated from 1.5mm thick strips to form rings at the top and bottom, and joined with a sheet of 1.5mm plywood to form the short tube section housing the spider and secondary mirror mounting. The focusser and finder have been mounted on an 18mm plywood section. Overall, the whole construction is both light and stiff. The top and bottom sections are connected by eight aluminium tubes in four triangles to form a “Serrurier-truss”.

Being of Serrurier-truss design, it has proven to be highly portable. I am able to easily dismantle and transport this Dobsonian. It takes next to no time to reassemble. I ordered the telescope with wheelbarrow handles and constructed a seven-foot ramp so I could wheel this 40-kg instrument in and out of the house.

Motions are particularly smooth to the extent that I have been able to manually track planets at magnifications as high as 507X with ease, even when using a narrow 30-degree field monocentric eyepiece!

A further advantage of this arrangement includes permitting sufficient friction to counteract wind forces and also the effects of heavy eyepieces and accessories. I was particularly pleased to see that the mount could balance a Televue Paracorr coma corrector and a 35mm Panoptic eyepiece, resulting in a combined weight of approximately 2.6 pounds, without requiring counterweights. I was assured by David that this would be the case.

The altitude bearings on the telescope are larger than the diameter of the primary mirror. This aspect, together with the stiff plywood construction, also results in any vibration damping out in a matter of a few seconds.

The Oldham optics primary mirror is made from low expansion Suprax Schott glass of 35mm thickness. The mirror typically requires approximately sixty to ninety minutes to cool without using fans. In general, thermal management has been well catered for in the design of this instrument.

The telescope was supplied with a six-page certificate of conformity detailing the specific tests that were employed to verify the quality of the optics. These included knife edge, null, double pass and spot tests. Two 300 lines/inch ronchigrams were also included in the certificate which indicated that the mirror is of very high quality. The report states that the primary mirror is accurate to ~1/10.6 wave ptv, 1/35 RMS and Strehl of 0.969. Although these figures appeared impressive, I was far more interested to see how the telescope would perform.

Once I had satisfied myself that the telescope had been accurately collimated, I first targeted Saturn which was low in the sky shortly after sunset. My first view through this telescope was one that I shall never forget. I was absolutely amazed to see Encke’s minima leap out at me. It was as stunningly clear as the Cassini division. The translucent Crepe ring looked wonderful. The view using a 7mm TMB Supermoncentric eyepiece and a 2X Skywatcher APO Barlow was almost comparable to photographs from the Hubble Space Telescope. The images remained sharp at over 600X where I simply ran out of magnification. I had been fortunate to experience the type of seeing conditions that allowed first light to become a truly memorable event.

My first deep sky object was M13 which appeared to “stream” through the field of view of my 22mm Televue Panoptic eyepiece. This globular cluster was resolved to the core at 81X and was much brighter than I had imagined. Images using a 10mm Televue Radian (177X) and Barlowed 13mm Nagler (272X) were equally impressive as they helped to somewhat expand and further resolve the core.

At a later stage I observed many other globular clusters including M2, M5, M10, M12, M92, M15, M56 and M72 which could be easily resolved. I have also enjoyed observing some of the more compact open clusters such as M11 and M71. On occasions I have been to detect colour in some deep sky objects, for example, M27 and M57 which revealed bluish and reddish tints. The Veil nebula and its filaments looked wonderful through a 35mm Panoptic (50X) with an O3 filter. I have also seen the Veil without a filter in light polluted skies using this telescope.

I have tended to use the 35mm Panoptic eyepiece to locate objects with the exception of some small and faint NGC galaxies that seem to require a slightly higher magnification in order to be detected. My preference for such objects is a 13mm Televue Nagler (136X).

I had several opportunities to observe Jupiter although the planet was not particularly well positioned in the sky. When seeing conditions permitted, fine detail such as numerous white ovals, festoons and features within and around the Great Red Spot were all clearly discernible.

The Oldham optics on this Dobsonian are superb. A number of tests were carried out, the results of which are outlined below.

The round airy discs of bright stars appear perfect. Faint stars are fine razor sharp points of light. On nights of good seeing I have been able to see faint diffraction rings around stars. Images snap into focus even at high power.

After extensive star testing, I could detect no major defects. There was no sign of any astigmatism, even close to focus. The test revealed near perfect correction and very smooth & high contrast optics. Given that the primary mirror is large and fast, and the star test is particularly sensitive, I consider these results to be very good.

A particularly impressive aspect is the ability of the optics to handle very high powers. The results of the magnification roll-off test were excellent. First light revealed that the mirror could easily handle forty times per inch of aperture on planets. In good seeing conditions Saturn would reveal a high level of detail and remain sharp at magnifications in excess of 600X, and Jupiter showed no sign of image breakdown at 507X. Under no circumstances have I ever seen Jupiter soften at powers less than 450X. I have even enjoyed good views of the moon at 888X.

I have also shared my experiences with a number of experts around the world who believe as I do that the optics are performing to a high specification.

Having owned a number of telescopes throughout my life, I have been very particular in terms of my specific requirements for this instrument. In many ways David Lukehurst and Norman Oldham have exceeded my expectations and I am very grateful to them. This 16-inch Dobsonian is an excellent high resolution planetary and deep sky telescope for experienced users requiring exceptional standards.