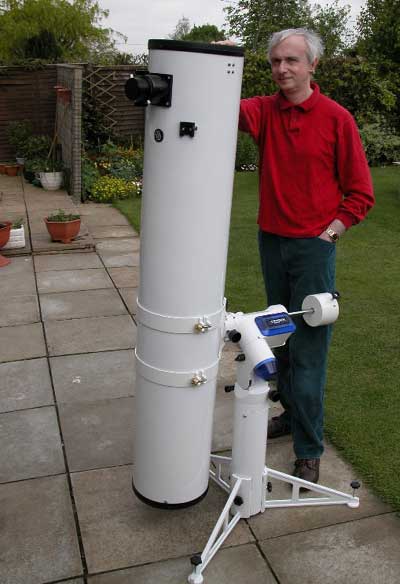 I have been a keen UK amateur astronomer for many years, since I was about ten years old in fact (1968) and am well known in UK astronomy circles. My first astronomy book on Astronomical Equipment was published at the end of 1998 and my second (The New Amateur Astronomer) has just been published by Springer. I have used a large number of telescopes since the 1970s but these days I have ‘settled’ largely on two instruments: a Celestron 14" SCT Paramount ME system and a brand new Orion Optics 250mm f/6.3 ‘SPX’ Newtonian. In terms of imaging, I started off as a lunar and planetary photographer in 1980 but, with very few of my results showing me what I could actually see through the eyepiece, I switched to comet, nova and supernova photography in the mid 1980s. However, inspired by the new ‘webcam revolution’ and, especially, the results of UK imager Damian Peach, I have recently returned to imaging the moon and planets.

Encouraging results with a 12” Meade LX200 made me think about acquiring a dedicated planetary instrument: one with the highest quality optics, one that would hold it’s collimation and one with a decent diffraction-limited ‘sweet-spot’. At the point that I made this decision, the UK company Orion Optics (not to be confused with the US company Orion Telescopes & Binoculars) brought out a new range of ‘SPX’ Newtonians on the Vixen Sphinx mounting. This telescope range featured the highest quality optics, better mirror-cell designs than their cheaper models and two unique features to the Orion Optics range: a curved spider for the secondary and a cooling fan behind the main mirror. The whole telescope cost £2,295, so, similar to a 20cm SCT like an LX200 or a Nexstar, when purchased in the UK.

The telescope arrived in May 2004, three months after it was ordered (delivery was stated as two months, but I was in no hurry…..the planets were badly placed until Saturn’s return). Apart from a problem with a semi-loose counterweight in the packaging (which crushed a couple of screws….immediately replaced by Orion) the telescope arrived in good shape and was a breeze to assemble. I could not get over how light the whole thing was….the entire OTA weighing only 10 kilograms (22 pounds). The telescope was so easy to assemble that there is nothing more to say. It all fitted together and worked.

The Vixen Sphinx is the smallest commercial telescope mount I have owned and is right on it’s weight limit with a 10kg payload. Nevertheless, it had no problem tracking or slewing the 10” f/6.3 OTA. However, a beefier mount would definitely give much more stability with a tube 1550mm long. In windy conditions the system does shake around….hardly surprising with a long Newtonian tube on a small mount. I would not recommend the system for Deep Sky imaging, but for visual observing and lunar/planetary imaging the Sphinx is good enough. On the full zoom LCD controller setting (which gives the finest slew speed) a planet can be jostled along in ten-arc second bounds, albeit with quite a lot of backlash in Dec. With practice, centering a planet in a one arc-minute webcam field will always be a delicate, but achievable operation. Needless to say, I centre the planet visually before putting a ToUcam webcam and 5x Powermate in.

I am not interested in ‘GO TO’ with this telescope….I know how to find the Moon and planets !! However, I did find that with a precise set-up routine and calibration on half a dozen stars, the Sphinx will usually get an object in a low power eyepiece field. This is not as good as typical LX200/Nexstar pointing accuracy of 5 arc-minutes; it will not put an object on a CCD chip. But, it will put it in the eyepiece, most times. For such a small mount it’s pretty good. I measured the periodic error as +/- 6 arc-minutes over an 8 minute period. Again, not good enough for long focal length Deep Sky imaging, but fine for planetary work. The Sphinx control pad is unique! An LCD display shows you constellations and the Moon and planets. I’d imagine this would be quite useful to a beginner. In the dark I found the keypad menu buttons a bit close together and easy to hit by accident, especially with gloves on. 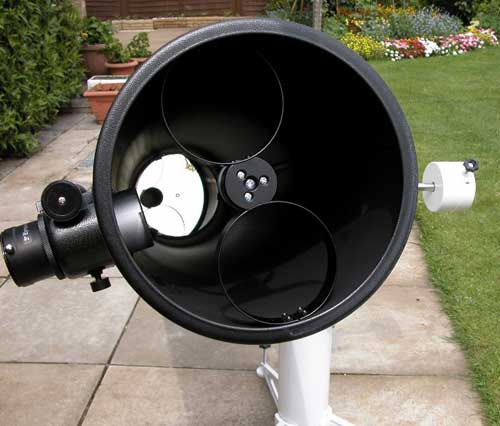 The tube is a 1mm thick rolled metal structure with a big strengthening crease down the side. Extra rigidity is supplied by the black tube end rings, the cradle, the mirror cell structure and the unusual double circle spider (which eliminates diffraction spikes around bright stars). Tube rigidity is good enough to retain collimation, which was my main requirement. The mirror has a convenient tiny ring on the optical axis which aids initial collimation. The primary and secondary support and collimation systems are far superior to that on Orion’s cheaper models. A 50mm right angle finder with cross hairs is provided. The tube is exactly eleven inches in diameter. 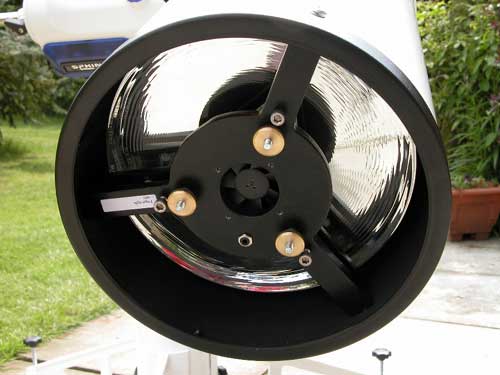 This is what I bought the telescope for: excellent optics that stayed in collimation. Was I pleased? More than pleased. In good seeing and when properly collimated the views are stunningly good. So good that it’s hard to find words to describe the lunar views. I thought that the Triesnecker rilles were supposed to be a good lunar test of a telescope…..they were yawning chasms. Even at 30 degrees altitude, Saturn’s Cassini 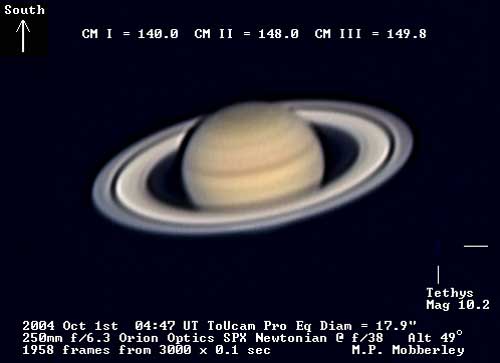 Division was huge. I’m not usually keen on high magnifications but 450x with this scope still looks fine. Apart from the optical quality, the scope cooldown, even without the mirror fan turned on, is rapid. The telescope lives outside in a little hut but even after a warm day I’ve never had any problems. My thermocouples on the mirror show that adaptation to the night air takes 30 minutes. A picture speaks a thousand words so I’ve included a few here from routine imaging sessions. The one thing I have altered though is I’ve replaced the supplied manual focusser with a JMI NGF DX1….the screw holes are the same! I used a JMI 5 inch radius base which almost fit’s the tube curve perfectly. Orion Optics tell me they will be offering Crayford type focusers for the SPX range very soon. The mirror clear aperture is a bit under 250mm….closer to 245mm in fact, or just under 9.7 inches. Nevertheless it out-resolves any previous telescope I’ve had (up to a 19.3 inch!) Orion supply a Zygo Interferometer test sheet with every telescope mirror. The one for my primary indicates a 1/8.4th wave PV (1/17th wave surface accuracy), an RMS accuracy of 1/45th wave and a Strehl of 0.981 at 633nm. Orion are developing quite a reputation for superb optics. 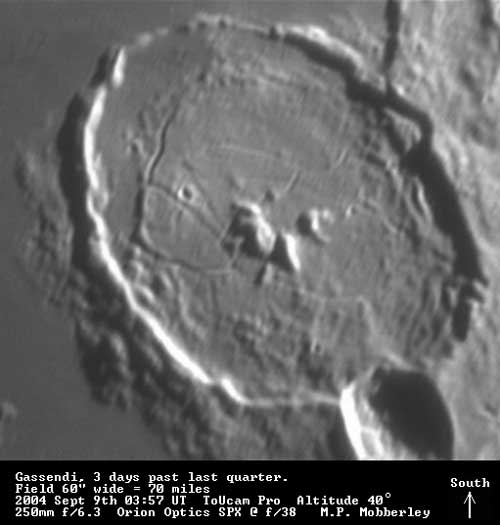 For the planetary observer/web-cam imager this is a hard telescope to fault. A motorised focusser is highly desirable, but that is the only grumble. The telescope is lightweight, cools down quickly and is VERY user friendly. For an observer of adult height, the 1550mm long tube frequently puts the eyepiece near to eye height when looking at the moon or a planet that is fifty or sixty degrees high. This convenience simply enhances the exquisite views that these optics deliver.