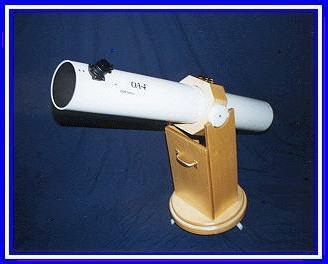 When first went hunting for a new telescope, I was living in Chicago, bright lights, big city and very few stars. I wanted an instrument that was relatively portable, but I did not care if I could fit it in my back pocket. It seemed that my choice was limited to a small dobsonian, a small refractor, or something like a Celestron C5. Unfortunately, the quality of the images in small Cats and dobsonians was only fair. The huge central obstruction of the C5 (and also the ETX, which was not available in a 5inch at that time) smeared planetary detail. Likewise the level of optical and mechanical quality of small dobsonians is not too good. Every time I looked through one of these instruments I longed for the views I had experienced while observing with apochromatic refractors at the local Astronomy club, and the school's observatory. But the tube assemblies of these instruments cost more than the car I owned at the time. So what is a poor astronomer to do? To show my hand early, look no further than the DGM OA-Series. The views are identical to those of equal aperture apos. There are only two qualifications. First, if you are interested in film-astrophotography, the F/10 instruments are not for you, second, if you drive to your observing site in a BMW station wagon, and want a short focus instrument that fits in your Louis Vitton gym bag, stick with a Takahashi or Astro-Physics

I don't want to belabor the technical description because the company's website offers all the information you need. Instead, let me confirm some of Dan McShane's claims about the scopes appearance and mechanical functioning. The scope arrived in two shipping boxes, and easily traveled UPS. When I unpacked the mount, I was amazed at its level of fit and finish This is not your grandma's Dob. The baltic birch and brass hardware are rugged, elegant and sturdy, and the finished product looks worlds better than the commercial fiberboard or plywood stuff that sells for roughly the same price. Unpacking and setting up the tube assembly proved equally rewarding. The tube is very black on the inside. The mirror cell is configured for easy alignment with wingnuts, and has large holes for adequate ventilation. The secondary is fixed, and never needs alignment. The alignment procedure itself could not be easier, requiring nothing more than a peep-sight made of a plastic film-can. The whole scope sets up m a minute or two. Once I had the tube on the mount, I quickly realized the virtues of the yoke which hold the tube. The tube can be balanced and rotated in an instant, and the brass tension fitting that holds the yoke together is foolproof. One of the problems with many dobsonians is that the motions are rather jerky, making any adjustments at high-power frustrating. The OA-4 I purchased was completely smooth in both altitude and azimuth. Overall, mechanical construction of this the DGM mount and tube assembly is first rate. My only minor quibble is with the helical focuser. While it is far better than the plastic rack and pinion models offered on other similarly priced units, it does not mach the silky smooth machined marvels that come with refractors in the optical class of the OA-Series. Nonetheless, the design of the telescope requires an extremely low profile unit, so even crayfords are out. I have heard that Dan now offers a wood veneer tube. Coupled with his fantastic mounting, I can easily imagine the scope at home in a living room as well as under the stars.

The Sky, at Last

Though I purchased the scope in Chicago, which allows mainly for planetary and double star observation, I soon moved to lowa, under darker skies. I have also taken my OA-4 to Nebraska My in-laws live near the site of the Nebraska Star party, where the reports of naked eye limiting magnitude of 7 are not unrealistic. I use various eyepieces in this telescope: a 6mm Unitron ortho, a 7mm Pentax SMC-ED ortho. 11, 17 mm and 32mm Televue plossls, and a 25mm Zeiss. I use the Pentax for most of my planetary observations and the l7mm and 25mm for general purposes.

The following notes and opinions have been compiled over a two year period. I have also directly compared the OA-4 to 5 and 8 inch Celestrons, a 102mm Zeiss AS, a Televue Genesis, and 6 inch Meade Starfinder. For what its worth, I have been an amateur astronomer for 15 years, so while not an old-timer, I am not a newbie either. Most reviews of telescopes would have the reader believe that there are only two types of objects in the sky, Planets, and fainter objects, like galaxies and diffusion nebulae. In the end, Sky and Telescope always concludes that aperture wins out every time, with 6 inch maksutov newtonians edging out 5inch apos, and 8inch SCT edging out both. The planets are better resolved in larger scopes, and faint objects are easier to spot, and appreciate in detail. In two ways this is only partially correct, as I hope to describe

The Moon and Planets

First, the high level of contrast available from the OA-4 allows me to consistently pick out features on Jupiter that are hard to find when seeing is less than perfect, thereby acting against the larger apertures. Jupiter's 4 main moons are consistently resolved into disks under very good seeing. I have observed numerous transit shadows, and even the transits themselves. Seeing the giant planet's disk so starkly resolved against a black sky is a sight to behold. Lesser telescopes smear the edges, and suffer from glare, false color and, some fuzziness. I remember comparing the OA-4 to a C5 recently. The views of Jupiter and Saturn were worse in every way through the Cat. In other words, the Celestron rendered the images duller, less resolved, and to my surprise, dimmer. When I first got the telescope, I was able to compare it with an older Televue Genesis. It was difficult to compare the planets precisely because of the vastly different focal lengths, but a view of the limb of the Moon told the story the Genesis displayed some color, while the OA-4 was flawless.

I shouldn't have to say that if you want to go around chasing obscure planetary nebulae, you should get a much larger telescope. On the other hand, the black background against which faint objects stand out in the OA-4 makes it easy to pick out galaxies that are challenging in a scope of this size. The high contrast also makes it possible to see a wealth of detail in brighter objects such as M31 and the Orion Nebula. During my last trip to Nebraska, the ring nebula was both a ring and oblong. The oval shape was seen by all the observers present. This is very impressive for a 4inch scope.

The view I get from a dark site consistently outperforms 6 inch reflectors, of lesser optical quality. I have never compared the OA-4 directly to a top class newtonian of larger, but close aperture, such as a Takahashi MT 130. I remember being impressed with the Takahashi, but also remember a 4 inch apo edging that scope out on the planets.

Telescope reviews seldom include globular and open clusters. If you think that a slightly larger obstructed telescope will provide better views of either of these objects, you are headed for disappointment. Under dark skies, the OA-4 resolves M13 to its core at high power. The star images in the OA series are simply so tight, that although a 4inch scope gets dim at over 100X, the stars are all apparent. M3 and M5 are also a real treat. I have found myself doing something I have never done with another telescope spending long periods at the eyepiece studying globular clusters. On the flip-side, open clusters through the 32mm plossl are splendid. The OA-4 has a wide enough field to take in the whole Double Cluster with this ep and the stars look like jewels hanging in front of black velvet. A telescope with a 30% central obstruction simply cannot pull this off. As an added bonus, the lack of chromatism insures that colored double stars are always true.

While I thought that Ed Ting's review of the OA-5.5 was justifiably positive, I think he leaves the reader with the mistaken impression that DGM telescopes are in some way specialized instruments. I think that anyone considering a telescope under $1000, should seriously think about purchasing an OA-4. (If you want to spend more, you should probably buy one of DGM's larger instruments) Every night I use it, I continue to be impressed by its optical performance, quality construction, and incredible ease of set up. I can think of no other telescope that combines reasonable cost, astounding planetary views, wide diffraction limited field of view, and diverse capabilities as a deep-sky performer. Following is some specific advice, recreating my thoughts about what telescope to buy:

I have never actually seen this happen.