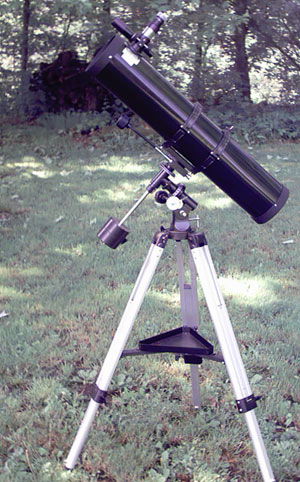 First, let me tell you that I have no connection whatsoever with Orion Binoculars, and Telescopes other than being a customer. Having gotten that out of the way, I will proceed with the review.

I ordered this telescope in November of 2003, and spent a week waiting with bated breath. I came home from work one day, and my younger brother told me it had arrived. I was like a child at Christmas. I brought the boxes out into the living room, and proceeded to attempt to assemble the telescope. It did not take very long to realize that the old saw "RTM" (read the manual) applied here. When I looked in the appropriate portions of the manual, assembly proceeded at a good pace.

I noticed when I removed the OTA from it's box, the tube had a minor "ding" in it approx 2" above the mirror cell. I very quickly looked down the tube, and realized to my great relief that the "ding" didn't interfere with the optical path at all. Roughly 1/2 hour after using the manual the Spaceprobe 130 was assembled. I will comment that Orion did use blank boxes in the parts box to insure no movement in it. There are two slow-motion controls supplied with the mount. One for the RA, one for the Dec.

Now I had the scope assembled. So of course, the new equipment curse set in. Clouds for about a week. That wasn't too bad. While I was waiting for the weather to cooperate, I fiddled around with it, including collimating it, (or so I thought... more later).

Now for a description of the telescope: The Spaceprobe 130EQ is a Synta manufactured 130MM, F/6.9 Newtononian Reflector on an EQ-2 equatorial mount. The accessories that come with it are a 6X26 correct image finderscope w/mounting bracket, a 25MM Ramsden eyepiece, and a 10MM Ramsden eyepiece. The mount is actually a hair light for this telescope, but will do for casual back-yard astronomy. I have noticed that when I tap the OTA, it takes approximately 2-3 seconds for the vibrations to damp. This can be corrected by modifications listed in other articles on this forum. The EQ-2 mount comes with two "setting circles" approximately 3" in diameter. I doubt that these graduated precisely enough for exact object location, but may suffice for "get close and sweep" location. 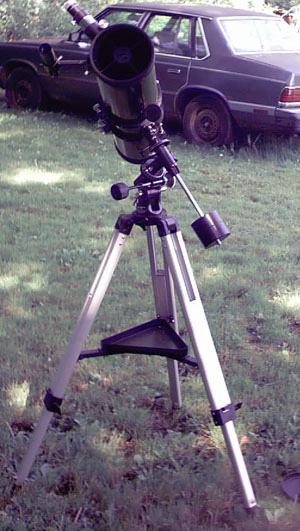 One November evening, I set the Spaceprobe out to cool. After the cooling time (I allowed an hour), I began my observing. First I turned the scope to M42 in Orion's belt. The nebulosity was clearly visible, and 3 of the 4 stars in the Trapezium were visible at 37X. I then put the 10MM eyepiece in the focuser. I immediately notice that the focuser was very stiff initially, and difficult to fine focus at higher powers. I had to twist the focuser knob, wait until the view settled, then twist again. I believe this is due to the grease that Synta uses during manufacture. After getting a good focus, I resolved the 4th star in the Trapezium. About this time the Moon rose, and basically all DSO's went to bed for the night.

Turning my attention to the Moon, I began doing some terminator work. First thing I noticed, was that's bright!! The phase of the Moon was, by the way, waxing crescent. AT 37X the entire disk was visible in the fov. Using the 10mm I was able to resolve smaller craters at the terminator, and observe the shadows slowly moving at the terminator. Later that evening, Saturn was rising, and I turned the SP130 to it. At 37X, the image was crisp, and rather small. Then I put the 10mm ep in, and slowly cranked the focus. My younger brother who was outside at the time, took a look, and I said "I can see the Cassini Division!). He has pilot's eyes, but I was skeptical. So I broke out my 2X shorty Barlow, and out it in. With the equivalent of a 5mm ep in now, I laid my eye to the ep. Wow!! I could see the Cassini Division, and Titan!

A week or so later, I broke the SP130 out again.(Undoubtedly hurtung my N8's feelings). With some contortions worthy od Nadia Cominece, I center the Double Cluster in my 25mm ep. Not to use a hackneyed cliche, but Awesome!! I could get both of the clusters in my fov, something the N8 can't do at this time. Then I swung over and checked out M45. Again, awesome, the entire cluster was in the fov. Then I said what the hey, and star-hopped over to M31. Cool, again the entire dso was in the fov.

I've lost count by now. Anyhow, during my last session with the SP130EQ, this is what I saw. Of course, my all-time favorite, M42. Then I swung to Auriga. I found (by sweeping), M36,M37,M38. These were all very fine. Then I chased M41 in Canis Major. Again, very fine. I've run out of hackneyed cliches here. Then I swung to Jupiter (not the first time btw), and using the various ep's, and barlow as necessary, saw the bands, zones, but I don't think I saw the GRS. Might not have had enough mags for that. By this time Herculaes was rising, so I said "Hercules? M13?". So I checked out what charts I have, and went back outside. I found it!! The only way I can describe it is looked like a luminescent q-tip head. But, wow!!

Would I buy this telescope again? Yes. Would I recommend it to someone on a limited budget? Yes, with the caveat that they should NOT expect to see objects as they appear in photos, with the exception of planets, and the Moon. The only suggestion I make to Orion is that they mount the OTA on an EQ-3 mount to give the stability that this sleeper telescope deserves.