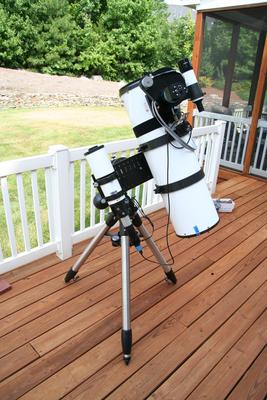 I have been looking for an imaging telescope with a medium focal length (800-1000mm) and a fast optical design. The TEC 140 APO refractor I have been using is amazing optically, but being an f/7 instrument means imaging faint nebulae and galaxies takes considerable time. The Vixen RS200 f/4 Newtonian was an option that initially looked promising, but as I researched it more thoroughly I lost interest. The initial price was more than I wanted to spend. Additionally, I learned from reading Internet forums that I would need to replace the stock focuser, meaning even more money.

Then I read some reports about the GSO 200mm f/4 Newtonian. It appears to have a strong following in Europe. This comparison of the Vixen RS200 and the GSO 200mm f/4 scopes convinced me that the GSO was worth considering. I found out that Smartastronomy.com had one remaining for the price of $350, and my decision was made.

Unpacking the telescope I was left with a good first impression. It is amazing the "bang for the buck" you can get these days with telescopes. The tube is steel like most inexpensive Newtonians. The supplied rings fit securely and bolted right onto my Losmandy dovetail. The mirror cell looked rigid and well designed. The secondary is mounted in a holder, instead of simply being glued on like I've seen in some other inexpensive Newtonians. The focuser had a good feel to it, but it appeared to be too tall to provide enough backfocus for my cameras. The OTA is pleasantly compact, and I've had it on my Unistar Deluxe alt-az mount without any problems due to size or weight.

Collimation using a laser collimator has been painless. The system is just like my larger Dobsonian. The secondary has a large screw in the center for rotating the mirror perpendicular to the optical axis. Three smaller bolts allow tilting the secondary. The primary has three bolts to control its orientation. Once collimated you tighten down the three retaining bolts to hold the mirror in place.

I setup an artificial star and tested the OTA. I discovered a small amount of astigmatism in the system. The orientation of the elongation led me to suspect the secondary mirror. I removed the secondary and saw it was held in place by a retainting clip and some sticky pads. I suspected the mirror was being warped by the pads, as I have read this is a common problem with this style of holder. I reassembled the secondary holder and tightened the clip with less pressure than it had initially. This seems to have addressed the issue as I have not detected any astigmatism in my astrophotos. 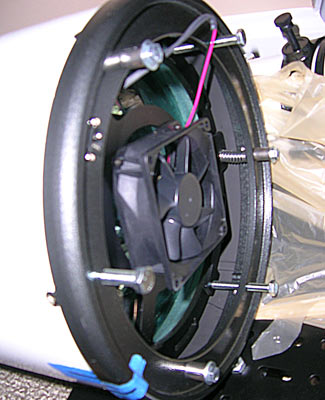 I tried to reach focus with both my Canon Rebel Xt and my SXV-H9. Neither would reach focus on the Moon. This meant I needed more backfocus. I first upgraded the focuser to a lower profile Moonlite CR1. My 10 inch Newtonian has this focuser (a motorized version) and it is very well made. Even though the Moonlite was shorter than the stock focuser, I still was not able to reach focus. So the next step was to push the primary mirror up into the tube further by using longer collimation bolts. The bolts I purchased were 50 mm long. I also needed longer springs to replace the existing ones on the mirror cell. Finally I bought 50mm retaining bolts as well. Installation was very easy, and now I was able to focus both the Canon Rebel and the SXV-H9. One caution - if you screw the collimation bolts in too far you will start putting pressure on the back of the primary mirror!

The rings supplied with the GSO 200mm have a single threaded hole centered on the bottom. This allowed me to attach a Losmandy dovetail, which is more than adequate for the weight of the OTA. Unfortunately, the rings do not allow you to attach a guidescope piggyback. I had been considering a tandem arrangement for some time so this was a good opportunity to try it out. I purchased a tandem plate from Scopestuff and mounted a Robin Casady saddle on one end. At the other end I mounted dual 3.5 inch guidescope rings to hold my Orion ST80 guidescope. The GSO 200mm slides into the saddle using the previously attached dovetail.

The system works extremely well. The mount requires less counterbalance weight because the guidescope is closer to the axis of rotation. I find the tandem arrangement allows me to reach a better balance overall. I image using an Orion Atlas EQ-G mount. The EQ-G has a specified weight limit of 40 pounds. The GSO 200mm plus rings and dovetail weighs 23 pounds. When you add the tandem arrangement with guidescope and imaging camera, the total weight of my imaging setup is 37 pounds. This has been a very sturdy imaging platform which has allowed me to autoguide at 1200mm (pixel size is 1.2 arc-seconds square) without any difficulties. 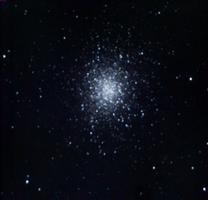 First light for the telescope was with a Meade DSI-C camera. I was able to hand focus the camera, but it was obvious that I was going to have to motorize the focuser. The zone of critical focus for a telescope with an f/4 ratio is very small. Focusing by hand was simply too challenging. Despite this issue I was able to obtain a promising image of M13. The collimation of the scope appeared to hold extremely well across the sky. Flexure of the main tube or secondary holder was not an issue. Now I just needed to wait until another clear night to pull out my more serious imaging equipment.

All fast Newtonians have off-axis coma. On my 10 inch f/5 Newtonian I have used a Baader MPCC successfully to address this problem. The MPCC is a lens system that compenstates for the coma. You simply thread it onto the front of the camera, and then insert the MPCC into the 2 inch focuser and secure. For the best image quality you must have the proper spacing (55mm) between the MPCC lens and the imaging chip. For my Canon Rebel DSLR this is the builtin distance from the T-ring to the chip. For my SXV-H9 I had to add 13mm of spacers to reach the proper distance. 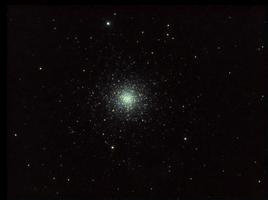 From my previous experience with the DSI-C I realized I would need to motorize the focuser. I had an extra Robofocus stepper motor and a shaft adapter for my FS-60C. After a trip to the hardware store and some tinkering I fashioned an adapter from the Robofocus motor to the focus shaft. It has worked great and backlash is minimal.

Conditions were not optimal the night I took the data for M3, but I was pleased with the ability to resolve the core. There were no problems with bloated or irregularly-shaped stars. Vignetting was minimal since the GSO has a 2.6 inch secondary that comfortably illuminates the 9mm chip in the SXV-H9.

I had some concerns when I switched to using my Canon Rebel Xt. I wasn't sure the Baader MPCC would adequately correct the extreme off-axis coma in the corners of the Rebel's larger chip. Also vignetting was going to be more of an issue than with the SXV-H9. However, I found that coma was not an issue. Vignetting was moderate - the background was 25% less in the corners than the center of the frame. Fortunately this was easily corrected by using a flat field frame. 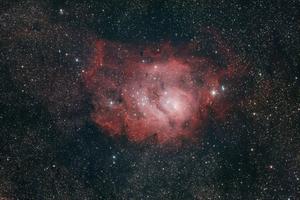 A wonderful aspect of this telescope is its fast focal ratio of f/4. This image was taken from my backyard and M8 is fairly low in the direction of considerable sky glow. I would estimate the sky is around mag 3.5 down there. However, this is only a 22 minute exposure! On my TEC 140 APO with a focal reducer I can shoot at around f/5.4. Since the pixel scale is the same for the two telescopes (FL ~ 800mm), the number of photons/sec per pixel is (5.4/4)**2 greater for the GSO than the TEC. The TEC setup would require 180% more exposure time to reach a similar signal level.

My favorite imaging scope has been my DBA Astronomy 10 inch f/5 Newtonian. Unfortunately it is a very large telescope, and I've been searching for a smaller OTA with a similar focal length. I realized I could reach this focal length with a 1.5x Barlow on the GSO 200mm f/4. I ordered a Siebert Optics 1.5x Barlow and tried it out. I simply inserted it into the focuser and then mounted my camera with a 2 inch nosepiece. I did not use the Baader MPCC for these images. 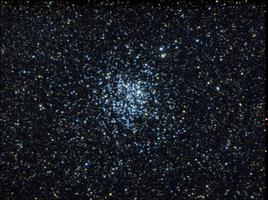 The first image is of the open cluster M11 (Wild Duck Cluster). This is a wonderful cluster in the middle of a massively dense starfield. Seeing conditions were not optimal and this affected the size of the stellar profiles. I was able to reduce the size of the stars using the common method of a minimum filter in Photoshop. Although large, the stellar profiles were encouragingly round. Hopefully I will have better seeing conditions soon to test the optical configuration better. 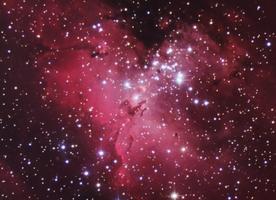 The next image is of the well known nebula M16. The optical configuration was the same as for the M11 image above. I found the stellar profiles in this image were even larger. I believe this was due to poor focusing on my part. The minimum filter helped but the stars are still quite large. There does not appear to be any blue bloat created by the lenses in the Barlow. This image has an exposure time of 30 minutes of R, 20 minutes of G, and 26 minutes of B, unbinned.

I believe I've found a fast imaging platform for medium focal length. The price is fantastic and component quality is good. The optics appear to be more than adequate for the type of imaging I am interested in performing. However, some modifications were required in order to image with this teleescope. I had to replace the focuser and install longer bolts for the primary mirror support to achieve focus. I switched to a tandem arrangement for guiding because the supplied rings to not allow for piggyback guiding. A Baader MPCC is necessary for imaging with a chip much larger than a DSI-C or DSI camera. Nonetheless, even with these modifications the price was considerably less than other fast Newtonians. I do want to stress you will not be able to image straight out of the box. An exception to this would be if you are using a small chip like the DSI-C, which worked well with the stock telescope.

I would recommend this telescope to anyone who likes to tinker and is interested in a medium focal length imaging telescope. It costs less than many of the new crop of small refractors and should have enough light gathering ability to keep exposures short. This, in turn, reduces the demands on guiding and makes imaging much more fun and rewarding.