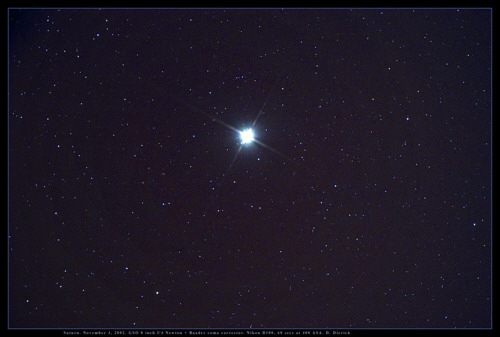 I have a used a lot of telescopes over the years, from a simple 4 inch Newtonian to a very powerful 14 inch classical cassegrain. Today, I use a 4.1 inch Traveller from AstroPhysics and a 7.1 inch custom-made Maksutov-Newtonian from APM in Germany. Both instruments ride together on an AP1200 QMD mount. For high resolution planet pictures made with the MN, feel free to visit the sites of APM USA, some are available online on that site.

Most recently I acquired a Nikon D100 digital reflex camera and a Starlight Xpress CCD. So I went shopping for a portable mount and a fast, but reasonably sized telescope to escape to the dark skies, away from the city. For the mount, I settled for the well-known original Super Polaris DX mount, a GEM, heavy enough to support some weight, but not too heavy to drag down the appartment building to my car. I added a used Skysensor 2000 PC for automated GOTO functionality. I won't review the mount here, it is, as mentioned, well known, and works flawlessly.

For the telescope, I hesitated between one of Meade's new Schmidt-Newtonians, and a classical Newton telescope. Given Schmidt correctors tend to accumulate dew much faster than a Newtonian secondary, and not willing to take along yet another electronics system to prevent dew, my choice became a fast Newtonian. Price was very acceptable and (in Europe) less than a Meade SN 8 tube assembly.

Wolfi Rainsburg, of Telescope Service recommended a GSO 8 inch f/4 (after I had received a really bad 8 inch f/4 before, don't ask me what brand it was, I don't know. All I know is that it costed less than a good eyepiece). So I asked him to ship me the GSO, together with a Baader coma corrector.

Putting the telescope on my AP1200 mount for testing proved to be easy with the supplied tube rings.

Collimation in an f4 telescope is extremely critical, so I took my time to do it right immediately. I took out the mirror from it's cell and put a mark in the center to aid with collimation. During daytime, I aligned the secondary with the focuser, and the primary later on, all with a Cheshire eyepiece. Collimattion proved easy, because the secondary support has 3 good accessible screws and one centerbolt, and the primary mirror cell is of the push-pull design, with thumbscrews, making the need of hex tools or screwdrivers unnecessary. Also, because of the short tube, it's an easy one man's job.

Next came the startest. I had to tweak the collimation of the primary just a little bit on a magnitude 2 star before alignment was perfect. Racking in and out showed nice diffraction patterns, but triangular... Obviously, there was stress on one of the mirrors. I had to take out the primary mirror to notice the clips were too tight and created the triangular diffraction pattern. Loosening them solved that issue. Back to the startest...

The patterns looked far better now, with no obvious errors like zones, turned down edge or spherical aberrations. I can say the optics are diffraction limited. Which also shows when focusing. Stars snap into focus without doubt or hesitation. I could easily use silly magnifications of 600x without "breaking" the image or it getting overly soft.

Of course the fast f/4 focal ratio creates coma as soon as you get away from the center of the field of view. Comes in the Baader Coma Corrector, made by Celestron. Plugging in this device into the 2 inch focuser turns the fast Newtonian into a dream instrument. Stars are pinpoint up to the edge of the field, with coma hardly noticable in good eyepieces.

I made some test pictures with a Nikon D100 digital camera (3000x2000) pixels, and they came out real nice, with small, pinpoint stars up to the edge of the frame (see image of Saturn). Weather has not allowed yet to make more pictures, but I have no reason to doubt the performance at the f/4 Newtonian focus.

Being suprized of the good performance, and because the 2 1/4 inch secondary does not give extreme obstruction, I turned the telescope towards Saturn. In reasonable seeing, the image of the planet through this 8 inch f/4 was amazing. Cassini division was visible all around the globe, also in front of the planet with subbtle color on the surface of Saturn. Several belts were visible on the planet. First test images with a webcam proved that the 8 inch was also a solid performer on planets! Is it as good as my 7 inch Maksutov-Newton? No, but it certainly is more than satisfying for the occasional planet observer. One doesn't expect this kind of performance in a fast and cheap Newtonian.

What I don't know:

Did I get a sample from the right side of the quality curve or is this typical for these telescopes?... dunno.