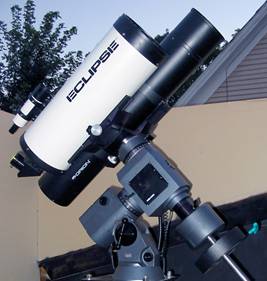 
The Maksutov-Cassegrain telescope configuration has been around for many years. It offers relatively large apertures and focal lengths in a compact package with less compromise than a typical Schmidt-Cassegrain design. Because for a given quality level and aperture they are more expensive to manufacture than the SCT, they are rarely seen in apertures greater than 10 inches. They are characterized by all-spherical optics; the primary mirror, corrector plate, and secondary mirror are all spherical or near-spherical surfaces. Popular units generally use a moving-primary focusing system similar to that in currently available SCT models.

There are two primary classes of Maksutov-Cassegrain instruments available: the Rumak design and the Gregory design. The Gregory Mak-Cass is generally less expensive to build than the Rumak because it uses the curve of the corrector plate as the secondary by coating an area on the inside center of the corrector to act as a secondary. Examples of Gregory Maks which have been offered to the amateur community range from the mediocre early 4” Maks made years ago for Celestron by Synta to the very nice 7” F/15 Meade Mak-Cass which was available for a number of years. The most popular models have been the 90mm, 105mm, and 125mm units offered by Meade in their ETX series. The Rumak design uses a separate mirror for a secondary, mounted to the corrector plate in the same way that a typical SCT uses. This permits the secondary curve to be chosen deliberately rather than being locked into the curved used by the corrector plate. This extra degree of freedom permits a wider range of focal ratios. It also permits precise collimation of the secondary to the primary mirror without having to fiddle with the moving primary mirror mechanism. These more expensive Mak-Cass variants have typically been available only from sources in Russia (the birthplace of the design). The Russian-produced Mak-Cass designs have generally been both no-frills and no-compromise instruments, incorporating optics of much tighter tolerances than typical available SCT models. Such instruments have offered superior performance both because of the design advantages and because of the attention to optical quality. The next tier was Meade's 7” Mak (a US product), followed by the ETX Maks from Mexico and finally the lower-end units produced in China.

Recent developments in affordable, relatively high-quality refractors have revealed that when asked to, the Asian telescope producers can achieve whatever quality and performance is desired. When I heard about the Eclipse Makview200 (a Rumak type unit) and its design specifications and price I knew I wanted to have a look at this high-end import unit. With optical parameters in the same range as the high-quality Russian instruments this one seemed to have possibilities. I've owned a couple of the 7” Meade Maks and have been pleased and impressed with their visual and imaging capabilities compared to the many Schmidt-Casegrain telescopes I've owned. The Makview200 appeared to have the potential to be an even better performer. When Manish from Agena AstroProducts (http://www.agenaastro.com/ ) offered to make one available for review I quickly accepted. Agena is the US and Canada dealer for this product line. 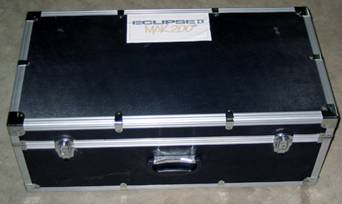 The telescope arrived in the usual cardboard box but rather than the typical inner box also of cardboard there was a nice foam-filled wooden case included. Inside the case was a 2” SCT-style diagonal, an 8X50 finderscope, and a 2” 26mm eyepiece. 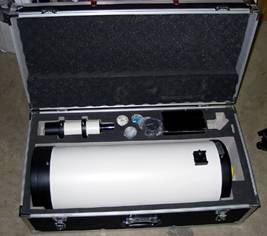 I quickly set the instrument up in the garage for a first look. Fit and finish seemed quite nice. Two negatives that I noticed were that the finderscope bracket is small and primitive in appearance, and that the Vixen-style dovetail plate is much shorter than the tube. It's bolted to the tube walls rather than to the end cells as is usual with this type of instrument. I mentioned this to Manish and he assured me that this was an early unit and that production units would have a full-length dovetail plate. This became important to me later, as my imaging mount isn't rigged for the Vixen dovetail and I had no way to remove the plate and replace it with a D size plate as used by my mount. 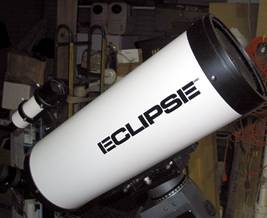 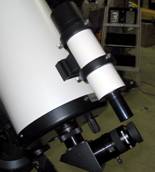 The corrector plate shows the benefit of modern coatings, disappearing nicely when looking into the tube. In this photo, you can see the filters where cooling air enters the tube. It is drawn out by the rear-mounted fan 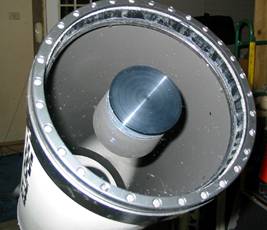 At the rear cell one can see the built-in cooling fan, focuser knob, and the supplied 2” diagonal. No DC cable or AC supply was included for the fan, but I have been informed that production units will include a power supply for this purpose. As with other larger Mak-Cass telescopes, the fan is an important feature. You'll want to use it (more on this later). 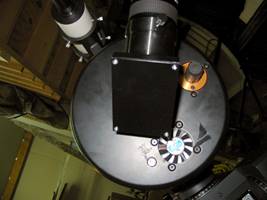 For its first outing, I brought the Mak out to our local Club's observatory site on a public night. The LXD55 mount handled it well, and we were treated to some very nice Jupiter views. As you can see, I set up before dark so I could take some photos. That's why I didn't notice the lack of a fan power cable on that occasion. 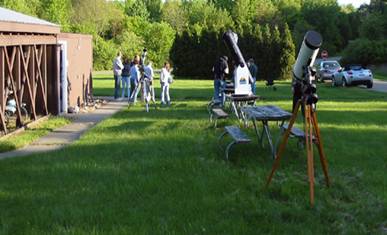 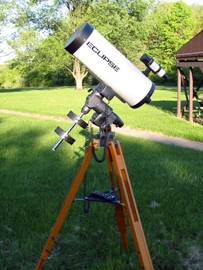 First light went well. I was amazed at the lack of focus shift. This is a very common phenomenon with moving-primary focusers in Cassegrain variant telescopes. I couldn't detect ANY focus shift in this one. I've owned some Celestron C8's which had very little but this one is better than the best of them.

The next outing was to my friend Scott's house. I got there after dark, so there are no photos. I immediately swung it over to Jupiter, hoping for some more nice views but things weren't pretty. I went over to Scott's 7” Meade Mak and it was doing just fine. That's when I noticed his cooling fan was running – oops. His cooled 7” Mak was giving great Jupiter views while the still-cooling Makview was having some problems. I have a 7” Meade Mak myself and I always cool it before using it; I generally use a Cat Cooler before attempting to use an SCT. I just didn't think of it for this one. The telescope gradually cooled, but Jupiter was too low by the time it was ready for action.

The next outing was the Norwalk Sky Tour star party. I had figured out by this time what was required (12VDC, center positive) and brought along an extra Meade power cable to run the fan. Cooldown was fairly quick with the fan running, and planetary performance was as expected - nice! 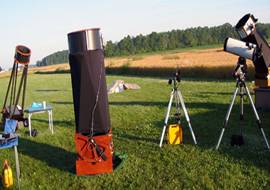 As in the previous year, the Cloudy Nights gang outnumbered the other attendees. They are great hosts and we all had a great time. It was the WETTEST star party I ever attended with no actual rain, though. Horrible dew. Even my Paracorr on the big Dob dewed up for the first time in my experience. That's when I figured out that the 8” SCT dewshield I had brought didn't fit. Agena AstroProducts doesn’t offer a dewshield for this model but did assure me that they could recommend a source for the correct unit. 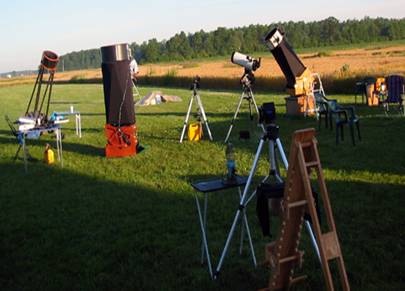 Next outing – a Great Lakes Pre-gaze! Not a formal outing, but a gathering at the site of the Great Lakes Star Gaze near Gladwin,. Michigan by some of the regulars (and me!). I had perhaps too many telescopes with me that time and that little honey in the center monopolized much of my time. 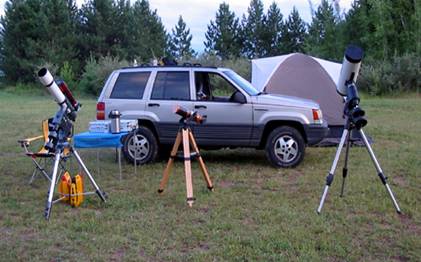 The Makview performed well, though, and some of the gang had a chance to check it out. 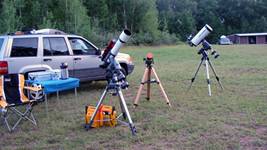 Now it was time to set the thing up where I could fiddle with it in privacy, and try to grab an image or two. I rigged it to the observatory mount in a not very satisfactory way – the new units with the full-length (and presumably removeable) dovetail plates should be much more flexible in mounting arrangements.

I used the telescope for a number of nights on a variety of objects. I can't testify that it meets the 1/20 wave RMS spec but I can confirm that the optics appear to be fine in star tests at 200X so far as my lousy seeing permits me to judge. The Double Double in Lyra split very nicely even in mediocre seeing at 100X. I didn't get to fiddle with the collimation as it was dead on even after shipping plus plenty of car trips. 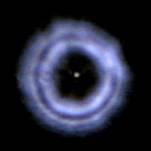 Between the wind and the temporary mounting I rigged up I was limited to fairly short exposures and discarded more of them than I anticipated so I didn’t manage any images that do this telescope justice; this M27 is only four exposures of 90 seconds. I think it gives a hint of what could be accomplished, though. 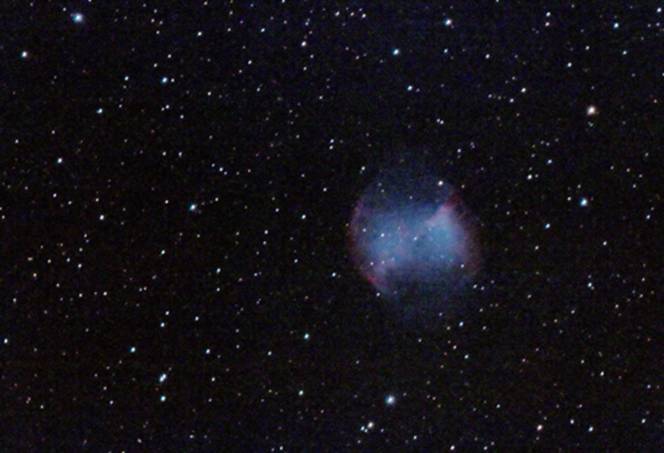 One reason folks choose Mak-Cass telescopes for imaging is that flat field. The following crops show star images at the center and one corner of an APS-sized DSLR (Canon 300D) chip. Nice and tight; no coma and everything stays in focus.

At about $3000 for an 8” telescope, this isn't for the casual user. Still, it's only a little more than a fairly popular Russian-built premium 7” Mak-Cass. For someone who really wants both the performance of the Mak-Cass design and the quality of high-spec optics and coatings this is worthy of consideration.

I have no commercial relationship with Agena AstroProducts, Eclipse, or any other manufacturer or dealer involved with the product reviewed here.