Recently I received a test unit from APM in Germany with the request to perform tests on the STF Mirage 7 Maksutov-Cassegrain telescope. The telescope is available in two versions, a standard version (optics guaranteed better then 1/6th wavefront) and a deluxe version (better than 1/8th wavefront error). The maker is STF in Moscow, former opticians from the Intes factory.

I received the standard version. The telescope is a Maksutov-Cassegrain with an aperture of 180mm and a focal length of 1800mm (f/10). The obstruction is 64mm, like the Intes version. Focusing is via the mirror, similar to well-known SC’s or other MC’s. Given the tube weight of 8.8 kg, a GM8, GP-DX or similar mount is the minimum needed to fully utilize the potential of the telescope.

The telescope comes with a flat mounting plate, and a nice 50mm finder with quick-release bracket.

I tested the telescope on several occasions so far, and this paper covers the results of all tests.

These are some of my observations:

Coating of the meniscus is very well done, blocks down reflections effectively. Looking inside the tube is like looking inside a well done APO refractor in terms of reflection and blackness.

The telescope was delivered in a matching transport flat black transport bag. A good thing for transportability and traveling.

Taking out the scope from my warm office to my balcony, cool down time was at least in this season quite acceptable, no more than 30 minutes are needed to have it stabilized. The back of the scope opens, by releasing three setscrews and taking off a plastic (what a shame!!) protector ring. Once the ring is removed you can see drilled holes in the back of the mirror cell to act as passive cooling device. Simple, but effective. I assume with greater temperature differences some longer cool down will be needed. Perhaps adding (available) fans could help. The importer let me know recently that on new orders a fan will be included even with the standard version of the telescope. A right choice.

The focuser is a typical Mak or SC type, it focuses by moving the primary mirror. This leads to image shift when reversing sense of direction in many SC telescopes. Fortunately, the STF has far less problems with it. Image shift is well within tolerances. I estimate this one in the order of 10 to 15 arc seconds with “rough” back and forth focusing. Gentle focusing (e.g. for critical CCD or planetary imaging) shows no more than a few arc seconds movement, so in real life, this means perfect. At least more than good enough for even webcamming at high focal ratios. The focusing is smooth, there are no dead zones, and it reacts instantly. Good point!

The connection of the focuser is standard SC threads, so many accessories for SC scopes will work on it right out of the box.

Unfortunately, observations on the first night had to be done in between clouds and haze. Nevertheless the image I got from Mars was quite spectacular for a 7 inch. It certainly reminded me of my 7.1 inch custom Maksutov-Newton telescope. Contrast is high, details are sharp and easy to see. The shrunk polar hood beamed like a white laser point with many albedo formations easy to see on the planet. A little less detail than with my Celestron 9.25, but with more contrast, due to smaller obstruction and more effective baffling and flattening of the tube interior. A star test has been done, and it confirms that the optics are indeed smooth and well corrected and polished. Just a bit of spherical aberration, but nothing to really worry about and actually I think very few people would ever notice it. This was already obvious by the interferogram that came with the scope, but I prefer to see it for myself instead of trusting on papers

On deep-sky objects the telescope performs superbly, with stars as tiny pinpoints up to the edge of the 35mm Panoptic I used for wide-field. The only distortion I see is inherent at the edge of the Panoptic.

Visually, I think one should compare it to a very well corrected 8 inch SC, with boosted contrast and good transmission. Without the annoying image shift at focusing as in many SC’s I have observed with.

The first tests were done in daylight, using a large sensor Nikon D100 digital camera. If it works with that one, it will work with any CCD on the market today, and probably even 35mm film.

The scope came with two reducers (first version!) by STF, a 0.8 and a 0.6 reducer. The images below show the vignetting at prime focus in the different configurations. I added a flat field and applied it to the raw image to check whether a flat field could solve any potential vignetting problems. And indeed, it does.

As one can see, vignetting is very well under control, with some more problematic issue with the f6 reducer (see later in this test why).

The images below show the extreme corner of the 6 mega pixel D100, equivalent to an enlargement of 50x70cm. 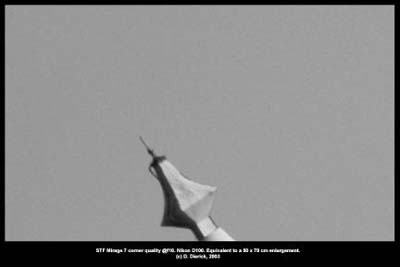 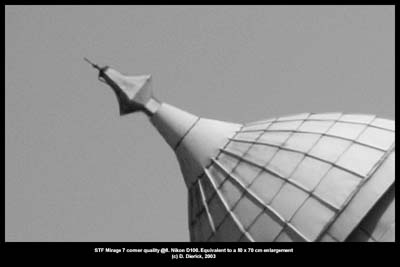 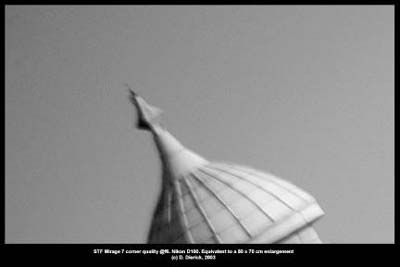 Again the results are very good at f10 and f8, but the reducer lets us down at f6, with a nearly unusable image.

Later I found the reason why the f6 produces such low quality results: the metal back distance to the film plane is very limited. In fact the reducers have female SC thread on the front and screw directly onto the back of the telescope. On the camera side, they accept a 2 inch camera adapter with nose piece. So, the distance from glass to the edge of the corrector is already 3cm, too much. Insert any camera adapter with less than a low-profile 2 inch nosepiece, and you will be way too far away from the glass, causing severe distortion. Actually, the same problem exists if you use an external filter wheel with CCD and the 0.6 reducer…

However, if you put the film (or CCD) plane closer to the glass, the errors are nearly completely subdued (see the star test images later). I have reported this misfortune to the importer and hopefully STF will correct this problem. The easiest way is to forget about the push-fit design of the correctors and put a T-thread on the backside, closer to the glass. Latest news I got is that STF is redesigning that reducer now.

In fact, I also tried my own Intes MK69 Photomak reducer with T-thread, and this one worked well with the STF! But the glass is much closer to the back!

The sky was not very transparent when this test was done, and the seeing mediocre. The last images were taken on a nearly completely hazy sky. But given the only thing I was interested in was the image quality, not how deep the scope can image, it was still acceptable.

At f10, with 1800mm focal length, certainly the telescope demands a good equatorial mount. Guiding is critical here, and there is no room for errors as they immediately show up on the picture!

The CCD images were taken with a Starlight Xpress SXV-H9 CCD. The STF was mounted in a double-barrel Losmandy system, with a 60mm f=700 Vixen guide scope mounted in parallel, all this on a German Millenium Mount with FS2 GOTO controller.

The first image was one of M15, taken at the prime focus at 1800mm. The result is very good, with stars being sharp to the edges, and no hint of vignetting (no surprise given the D100 result) : 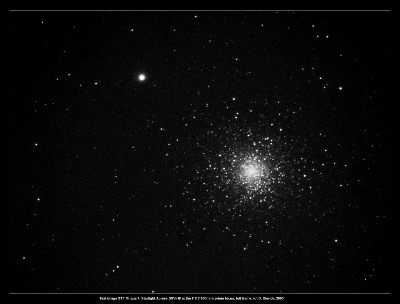 I skipped the 0.8 reducer, and went directly to the “worst” case with the 0.6 STF reducer. As shown, the image is good with the CCD close to the glass of the corrector (CCD inserted via low-profile 2 inch to 1 ¼ inch adapter and 1 ¼ inch CCD nosepiece): 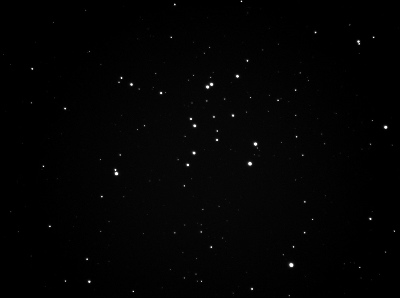 However, when used with a filter wheel of 35 mm depth, the distance becomes too high and it leads to highly distorted images, with serious coma, virtually unusable.

Someone interested in imaging at 0.6x with CCD and external wheel, should consider another reducer, or wait till a better one is available from STF (I had one from the very first batch) – or, also a possibility, reduce yourself the distance by putting the glass in a different housing.

An existing alternative is the Intes reducer, which does work well with a wheel in place, as can be seen in the image below, be it that it seems the reduction is a little less, probably 0.75x. 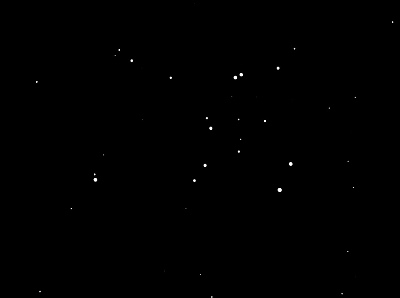 With the Mirage 7, STF has made a very fine instrument at a very fair price, especially in the standard version.

It has lots of visual and photographic potential and will give loads of pleasure to the owner, both for planetary or deep-sky observations. I certainly enjoyed it as a handy and portable telescope.

There are only two negative points which we should remember:

These are in my opinion only minor points, easy to solve, and will not limit the otherwise excellent quality of the Mirage 7.

If I receive any feedback from the importer or STF related to these points, I will update this text