This scope is actually marketed as a camera lens and has been carried in various colors with a number of vendors. It is an Synta MC90 - a 90mm Maksutov-Cassegrain at f/5.6 rather than the usual f/10+.

This little scope caught my interest as a possible replacement for my ST80 that would provide similar views without the chromatic aberration.

The MC-90 comes with a diagonal/eyepiece holder, covers for both ends, and a tripod mounting block. It's all packaged in a very nice padded case with movable dividers. Note that it does not have a finder or finder mount and does not come with diagonal or eyepiece. Aside from the white tube and shorter focal length, this scope is the same as Orion's Apex or StarMax 90mm. Take a look at Orion's web site for information and accessories on the Apex/StarMax line. The site has nice photos of the scope and bag. Sky-Watcher carries it with the same model number and appears to be the same form as the Synta.

Left: MC90 next to the massive ST80, Right: MC90 dwarfed by a telrad finder

Physically, the scope is tiny - Just a bit bigger than the central section of the ST-80's body. Including the diagonal holder, it measures 8.75" long and 4.2" in diameter. (22cm x ~11cm) It is as long as a Telrad and just a bit taller. 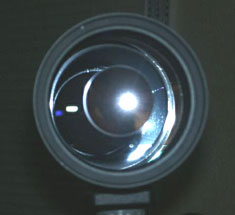 The secondary is rather large (40mm of the 90mm objective), to ensure that the image fills a prime focus 35mm film frame. That makes it ideal for film photography, but it seems to reduce contrast and light gathering a bit. Again, this is a reminder that this scope is marketed as a camera lens or spotting scope, rather than a telescope. In fact, the tube is marked "mirrored lens".

The coatings on the corrector plate show as a faint purple-green tint in reflections, which change with the viewing and light angle. The mirror coatings look even and bright. Collimation was good, though one inexpensive diagonal causes very poor collimation. This diagonal did not cause problems with my short tube refractors.

The scope is well made and has a very solid feel. The fit and finish is great overall and the various parts fit together tight and square. There are two minor exceptions - The metal lens cover is loose and falls off easily, but this is easily remedied with a bit of felt. There is a minor run in the white paint. 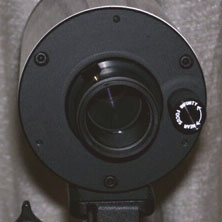 The rear cell is a bit crowded, but workable. The focuser is a small knob sticking out of the rear cell and is clearly marked with a double arrow telling you which way to focus for near or infinity. Focusing movement is a bit stiff and can have some "rebound" in the cold. 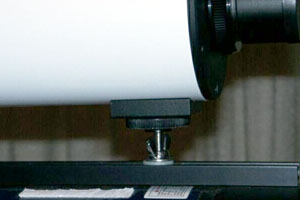 The rear threads are smaller than Meade and Celestron SCT threads, so normal SCT accessories won't fit. The diagonal holder has standard T-threads on it.
Finding rings for the scope may be a problem because it's just a bit too big to fit the standard 4.1" rings and much too small for the next size up at 4.6". You could pad the 4.6" rings or use 4.6" three point rings like those from Scopestuff.com. Another complication is the placement of the tripod block - It sits less than ½" from the rear cell, leaving only 4" between the front of the block and rear of the lens cover. 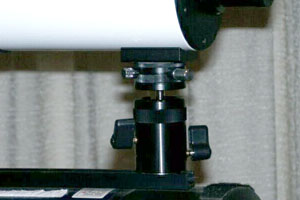 I have also used Orion's ball head camera mount set on the rails with a standard ¼-20 bolt and star washer. (Just pull up and spin the unit to tighten the screw to the rail.) This mounting is stable enough for high magnification work and allows you to align the scope with the larger goto scope so it can perform as a super finder.
This scope is light enough to mount on a good camera tripod or with a standard camera mount on another scope. I have scopestuff.com's rails and the little scope works well on his camera mount works well for low and medium power work. 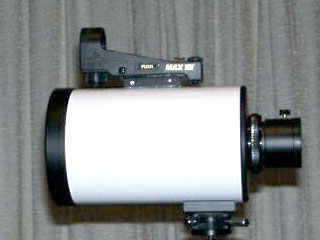 The MC-90 comes without a finder, but that wasn't really a hindrance, given the wide FOV and clean top of the scope. For the first few session, sighting down the top of the scope was good enough find the brighter winter objects with the 26mm Plossl. A small BB gun red-dot sight would work wonderfully on this small scope, but you'll need to remove taller eyepieces to see the red dot. I chose to install the MaxView finder from Daisy, which seems to be a shorter version of Apogee's Giant Mars-Eye finder.

If you're interested in this finder, here are two links for it:

Not surprisingly, the MC90 at f/5.6 provides comparable FOV to the ST-80 & ST102 at f/5. A 25mm Plossl provides a view that encompasses all of Orion's belt or swallows the Pleiades en masse. A 10mm Plossl is just a bit larger than the full moon.

Excluding the secondary shroud and focusing tube, this scope has no baffles and no dew shield. This means you can see off-axis light perhaps 10 degrees from the full moon. A dew shield helps somewhat, but the off-axis light does not seem to degrade the view of the moon. Just don't try dim objects near the moon and this won't be much of a factor. The interior of the tube appears to be a nice flat black.

Another minor problem is images reflected between the field lens of the eyepiece and the secondary mirror creates a bit of odd color at the top and bottom of bright planets. Using the Omcon 25mm Plossl I purchased with the scope, I had a startling image with the full unfiltered moon. Without the diagonal, this eyepiece shows the moon filling perhaps ¼ of view and a ghostly pale blue image of the moon - in focus! - that fills perhaps ¾ of the view. Other 25-26mm Plossl eyepieces show similar images, but are not in focus. When the diagonal is added to the mix, this reflected image is spread out enough that only bright objects show any color. For example, Jupiter shows a blue tint at top and a brown tint at bottom of the view. This might blur the details at the poles, but is easy to ignore. Besides, this is a rich field scope - Use it at low magnification to get the most out of it!

I'll try to give my impressions & comparisons of the little scope in suburban skies with good to very good seeing.

Quarter Moon - The views of the Moon at all magnifications were crisp, clear, and nearly free of color. (The limb was tinted very lightly blue.) With a 26mm Meade Plossl, the dark side of the moon was visible, but no features came through. The lit side was very sharp and impressive, with some field stars visible. With my 4.8mm Nagler (roughly 100x), the view was tack sharp and very clear. The FOV was slightly larger than the moon itself. With the 4.8mm and a Barlow, the view softened, but it was still very viewable. You won't count craterlets in Plato, but you will get very nice general views of the moon.

Jupiter - With a 10mm Plossl, the equatorial bands were very visible, as were the four moons. Additional details were visible during moments of good seeing. I noticed some odd color in the bright planet as it neared the edge of the view. (see above notes) It was not enough to distract from the crisp view. I have had some viewing with my 4.8mm Nagler, which provided excellent views on exceptional nights, but it is not an everyday combination.

Saturn - Again, the 10mm Plossl was upper limit, but the view was nice and clear. Some detail in the rings was visible during clear moments of seeing.

Orion's Nebula - The view was nice, but not fantastic. The light polluted skies (roughly mag 4.5) washed out the nebula. The MC90 and ST80 had similar views, while the ST102 showed much more detail. All three scopes showed improved views with a broad band nebula filter. At higher magnifications, the Trapezium was visible, but more details were not visible in the nebula as magnification increased.

Pleiades - With a 26mm Plossl, the view of this wonderful cluster is breath-taking and easily encompasses the whole cluster, including the little trail of stars off to one side. Even at that wide view, the little triangle of stars next to Alcyone was visible. (The dimmest star of the triangle is magnitude 8.65.) A quick count of cluster stars showed roughly 50 stars easily spotted and many dimmer stars were barely visible. I would expect those counts to increase quite a bit at a dark site.

Bright Objects - The MC90 showed a faint rim of color on bright objects, while the ST80 and ST102 showed large purple halos on Jupiter and the Moon that greatly interfered with the view.

Bottom line? The MC90 matches the performance of the ST80 in rich-field views and does it in a smaller package. It also easily out-performs either short tube refractor on bright objects. It At $220 US, this compact, care-free scope is a great alternative to the ST80. I only wish that they offered several sizes - I'd love a 102 or 127mm version!