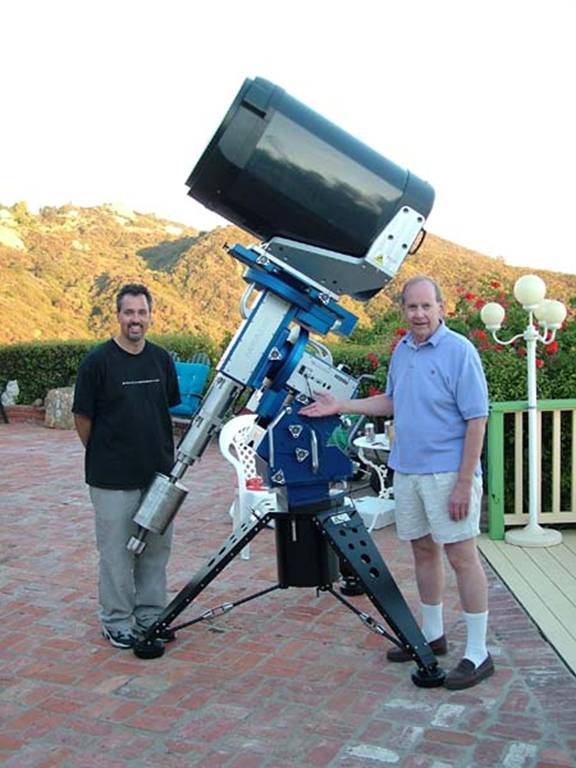 This review is about our experiences with Meade’s flagship telescope, the RCX 20” and Max mount. Ralph Sargent is one of only a handful of individuals in the world to own one. I have conducted over a hundred personal house-calls to assist individuals with their telescopes over the years. I usually give a tutorial of the night sky with my green laser and dive into eyepieces, so when I was asked to assist in this matter, I had no hesitation, and with a name like Ralph Sargent, I got the impression that this guy was seriously into his hobby. Ralph currently has a Meade 12” LX200 classic on a concrete pier within his ten-foot dome and felt it was time for an upgrade. Ralph is mostly an astrophotographer, but we were going to make sure this scope got a thorough, visual first light.

THE ARRIVAL AND SETUP:

The first time I saw this telescope was during a presentation at RTMC, a popular astronomy convention in Big Bear, , which is held every year during Memorial day weekend, but I had no idea I’d be setting one up, so I knew I was in for a serious task. The RCX is delivered in about a dozen different boxes, which require assembly. When it arrived, there were a couple of boxes missing and a few that were damaged during shipment. Fortunately, Meade did a great job in packing this scope and no damage was done. In the end, Meade followed through and all the boxes were finally received. 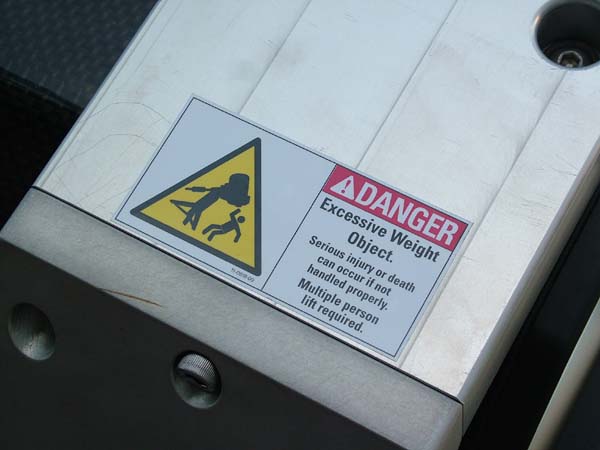 If you think this safety logo is a hilarious, entertaining conversation piece as I did, let me tell you that it’s actually true. Meade is very serious about the safety here. Once the mount was assembled, we carefully studied Meade’s instructions on how we were going to hoist this OTA onto the Max mount, which stood over 70” tall and with a $30,000 price tag in the balance, you can’t blame me. A 12” LX200 can be lifted by one person if they’re really strong, a 14” LX200 is a two person setup unless your Scott Beith, but hoisting a nearly 200lb. OTA the size of a trash can is very awkward, especially when it has to be lifted over your head. I was in for a surprise. This OTA requires five people to hoist onto the mount for the best results, three at the rear and two at the front, not to mention that you have to land the dove plate into the saddle plate just right. 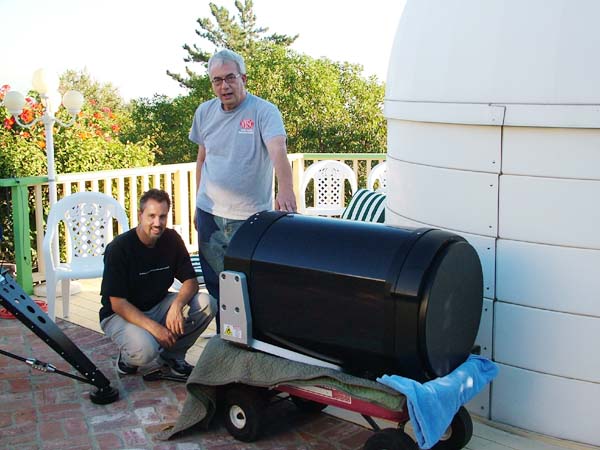 Unfortunately, two other guys were late on arriving to assist in setup, which left only four of us to lift the OTA. Because darkness was slowly starting to close in, we had no choice but to lift the OTA ourselves, time was running out. We lifted the OTA off the Radio Flyer wagon. After nearly a two minute struggle, we finally got it on. Boy was I glad that was over! We all took a step back to look at the final product. The first thing we said was “This thing is BIG”. It looked beautiful in it’s 2,200 ft. perch above ’s coast.

Let me tell you that the quality of the Max mount is first class. Meade spared no expense on the machining and precision. The Max mount can not be moved by hand. It is strictly a GOTO mount and for good reason. This is also another safety consideration. You wouldn’t want a tube or counter weight toppling over your head. Meade’s Autostar hand controller is a little different for the Max mount. In order to balance the scope, the RA goes through a rigorous back and forth movement on its own. The Autostar has a readout which displays a series of numbers with “1.00” being the most perfect. As the RA moves back and forth, you have to spin the counter weights to move them up or down.

While this is done, the numbers would change from .95, .98 and 1.04 to 1.08 and so forth. Once the 1.00 number is achieved, the balance is in check. The same procedure is followed for the DEC as well. After this, the mount goes into home position and asks you to align Polaris in the finder using the mounts altitude and azimuth polar adjustments only. For those of you wondering what the mount sounds like, it reminded me of a diesel engine, but not as loud but it wasn’t too bad. Once polar alignment was completed, we turned the mount off and started it up. Meade’s Autostar is so easy to use, that anyone with a little experience could use it. Once the Autostar is turned on, it says press “0” to begin alignment. The scope will only need to find one alignment star on its own and all you have to do is center it and press enter and your alignment is complete. It couldn’t be easier. This is far easier than any Celestron scope I’ve used. The key to user friendliness is a hand controller that tells you what it wants you to press.

The first thing we did after aligning Vega was to star test the RCX and check collimation. The star test was nothing short of sensational, literally text book quality with nice, concentric rings both in and out of focus. To my surprise, the collimation was dead perfect too. The company which delivered this RCX tipped over some boxes while driving up the winding road and Ralph wanted to make sure the collimation was good. This amount of light gathering could easily devour galaxies but we decided to see more popular objects during the test run. M57 was the target for first light and it was sensational. Under the conditions of this particular night, there was just a bit of haze in the atmosphere that would soon blow through, so we did not see the central star at this time but the ring was gorgeous. We then looked at the E.T. cluster NGC 457. It stood briskly in the 40mm Meade SWA.

What really amazed me was how pinpoint accurate the stars were! I honestly did not expect this from such a large aperture of this design, but I was dead wrong. Cluster after cluster, we went on all night. We looked at planetary nebula as well. We could see the green tint of the Saturn nebula and the lobes at each end using a 26mm Series 5000 UWA eyepiece. The real treat was the trapezium in Orion. It was reminiscent of the 60” at . There were stars everywhere and the six stars just shot out at you! Another thing that blew me away was that I had never seen stars this bright in my life without any diffraction spikes. I would rate the optics first class in the 20” RCX. I can’t wait until the laminar air flows in and we start viewing planets. This scope is going to be a killer. One of the observers named Mr. Stark made a comment that will stay in my memory. He said that the RCX looked like a giant hammer in the dark. I couldn’t stop laughing! A lady from next door came to visit. I showed her the Andromeda galaxy and explained to her that the light took about two and a half million years to reach her eye. She was almost in disbelief. Over all, visual observations were stunning to say the least. 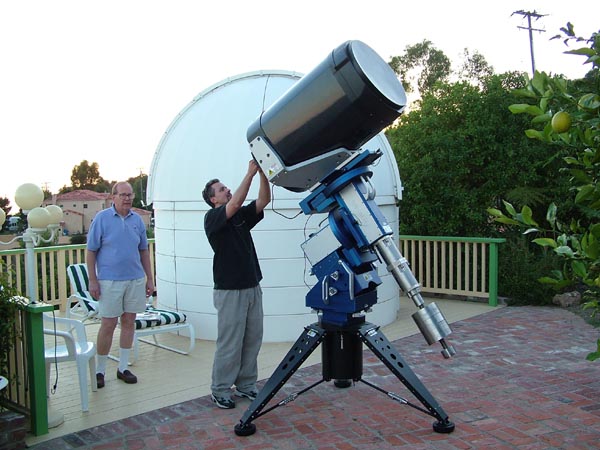 WHAT ABOUT THE CONS:

We encountered a couple of issues. Unfortunately during the slewing of the telescope, we quickly learned that the RS232 cable got tangled too easily on the mount, which damaged the RS232 cable and even worse, the RS232 jack on the mount itself and this was not caused from improper use. It’s too bad no one has a coiled RS232 cable for a change. My advice is to be extremely careful in watching this cable to ensure it does not get tangled on any part of the mount. The other issue is balance. If the mount is not balanced exactly right, then the mount tends to oscillate or joggle a bit during slew mode. The issue here is that a factor of “1.00” on the balance should be achieved, but we had some difficulty in achieving this. The best we got was 1.03, so perhaps some more test runs will be needed before we can weed out the balance issue just right. The pointing accuracy was impressive, but I do believe that the accuracy will be determined mostly by which star you decide to line on.

WHAT ABOUT THE PROS:

Over all, we were all extremely impressed with Meade’s new RCX 20” and the optics were sensational. All of my friends on cloudynights know how particular I am when it comes to optics. Meade’s Autostar is a joy to use and has more features then I can explain. The RCX also has a built in fan and temperature gauge for both internal and external temperatures. You can even collimate it from the hand controller. The RCX is not a Cadillac, it’s a Bentley. The Max mount performed well and the overall package was a real winner. My hats are off to Meade on this one.

A NOTE REGARDING SKY&TELESCOPE’S REVIEW OF THE RCX:

One of the cons S&T magazine gave regarding the RCX was that dust could get into the tube more easily. This is because the corrector plate moves back and forth to achieve focus, which in turn eliminates the drag of mirror shift common in most cassagrain type telescopes. Because of this, there is an air gap around the corrector, however, I strongly believe that with proper care and maintenance, the trade offs of an open air gap far out-weigh the disadvantages of a little dust touching the primary and secondary, especially with a 20” aperture using a carbon fiber tube.

When I first heard about carbon fiber tubes, I thought they had great thermal advantages. The truth is that they do, but not in a completely sealed tube of this aperture, regardless of whether it has fans or not. A little bit if dust is no where near as damaging to image quality as heat currents inside a tube that can not breath. I carefully observed the thermal behavior of this 20” RCX and it had no issues at all like the Celestron scopes I’ve tested in the past and the ambient temperature dropped pretty fast during our observations. The real reason carbon fiber is used is to help prevent expansion and contraction of the OTA during astrophotography. There is no doubt that the air gab around the corrector is actually a huge pro in Meade’s favor.

I have to admit that I am not a real Meade fan, but I feel that the RCX 20 is a break through for Meade and a great accomplishment. If you’ve got the big bucks, then it’s worth the price of admission.