22-inch lens or mirror blank for sale For Sale 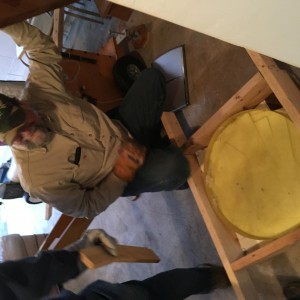 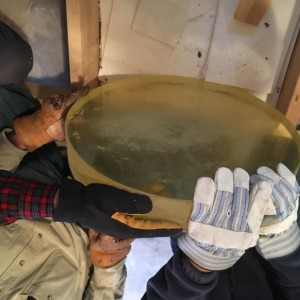 I have a large glass blank for sale, of unknown origin and composition. I suspect it was made for the US military and was disposed of when their plans changed.

By comparison, some of the commonest and cheapest optical glasses are BAK-4 with density 3.05 and BK-7 with density 2.5.

It's not clear who made this disk, or why. Someone suggested that the glass might contain radioactive thorium. However, I tested for that with an iPhone app called GammaPix and it reported no gamma-ray radioactivity at all. I've not been successful so far at measuring the index of refraction. I also found that none of the glasses listed above (as manufactured today by Schott) contain any Thorium or Lanthanum (which is used to replace thorium).

On one edge, someone scribed the numbers "2-8-56", which might mean that this was made some 62 years ago!

There is one chip near one edge.

This is quite a heavy piece of glass, so shipping is going to be expensive. I am located in Washington, DC, in case you'd like to drive here and pick it up.