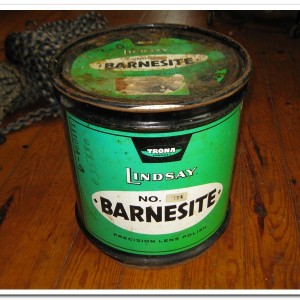 I have a ~50# can of Lindsay Precision Lens Polish/ Barnesite 774.
Let me state what I do know about this material:

1. It is not radioactive. I had it checked at the State Lab. It was discontinued because of processing difficulties/ probably not economical, right?
2. It polishes fast, much faster than rouge. It was used to polish the Hale 200". Good enough recommendation?
3. It cleans up very nicely, better than Cerium Oxides I've used which can leave a slight haze.
4. It dilutes easily and works in very dilute concentrations. I've used settled Barnesite for final figuring, and it works much slower.
5. Edmund Scientific included it in my 6" mirrormaking kit but later discontinued it when production stopped. It was recommended for the initial polish, and the rouge that was included was for final finishing. That's still generally how I use it.
6. The can has been opened by Mr. Brower, and has been opened once by me to see that there is a paper cup and a spoon inside the inner bag for dispensing. Stanley was meticulous in his lab, wore latex gloves when touching ANYTHING so I trust the purity. I already have a separate can of Barnesite for my own use.
7. This product is designated #774, and I do not know what that particular catalog number indicates. I have seen #85 and #924 used to designate types.
8. Lindsay was a pioneer in producing Cerium Oxide during WW2, and I was told by Brower that most Barnesite polish contains a fair amount of Cerium.

Since high quality Cerium Oxide goes for $40/lb+, and I quickly sold a bucket of Cerox for far less, I think it's fair to ask $20/lb in small quantities. I'll carefully decant with Stan's original cup and spoon, and double bag it.

I can make a deal for larger quantities.

Got many orders so about half gone.....going fast!