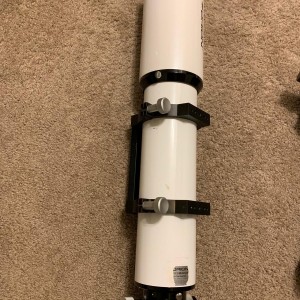 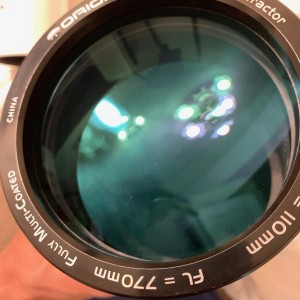 Update 2: I have cleaned the dust. I'm not sure that the job is optimal. There are some traces of cleaning left, but I think they are less than the dust. My fair guess that these traces would go away under some more careful cleaning, but I don't want to try anymore. I think there is either no permanent coating specs, or their effect is less than the one of the dust. It's a used scope, after all.

I lowered the price a bit because of that.

Update: the lens cell can be unscrewed. I just checked that the dust is on the outer inside part. Can be easily cleaned if needed, but since there is not much of it, I decided not to touch.

I have too many refractor telescopes, so I decided to sell this one. I bought it here on CN for a bit higher price than listed and never used it, except that I had to re-grease the focuser. It is working well now (it has a different focuser tube compared to the original focuser, but it's pretty robust). It used to be clicky when I bough it, but now it's not clicky, at least as far as I can tell.

The lens has some dust, but not enough to justify cleaning, and there is no way it would affect the image. There are also a few scratches on the tube, as you would expect from a used item.

I never really used it. The previous owner (a well respected CN member) claimed that it was well collimated, and I think it probably stays this way.

Some links to descriptions and reviews of this model:
https://www.telescop...cope/p/9206.uts
https://www.cloudyni...refractor-r2383

Some extra that I can add:
GSO 2" dielectric diagonal: $70
Orion reducer/flattener: $70.

Sorry, I'm not selling the accessories separately, for now.

It's a good entry level refractor for visuals or astrophotography. If you get a triplet refractor then it would give you better image, but it will be more heavy and cost at least 3 times more for the same aperture. It comes with rings and Vixen dovetail plate, but no mount.

More photos on request. I can ship it for $40 in CONUS, using UPS Ground. Can also meet locally (Lansing MI, within say 50 miles).