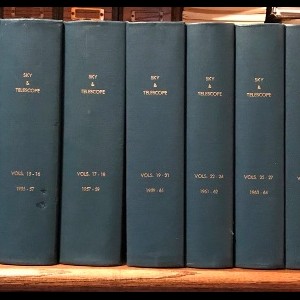 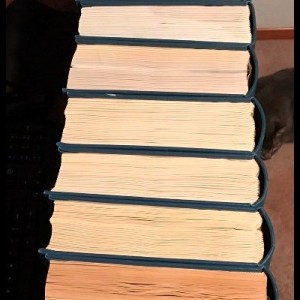 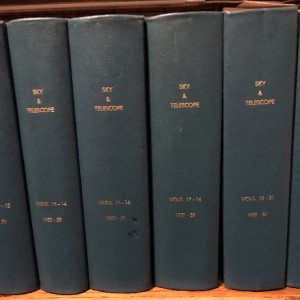 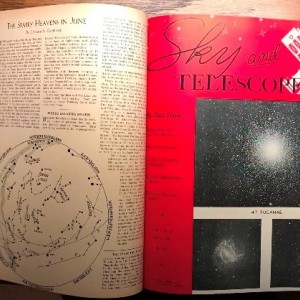 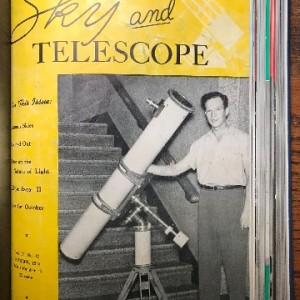 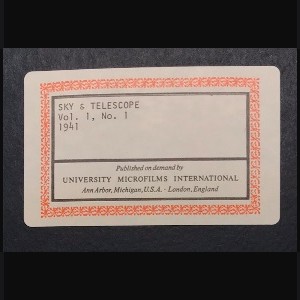 Up for consideration is the ultimate companion for a cloudy night, when you are unable to observe, but can peruse astronomical history as recorded through Sky & Telescope magazine.
This is a bound set of Sky & Telescope magazines from its beginning in 1941 through 1970. Although it is available in digital format, there is nothing like laying out the magazine on the desk in front of you and flipping through the pages.
See the ads from early telescope manufacturers and witness the birth of Edmund Scientific Company and Jaegers Optics. Discover the early advertisements from Brandon, Unitron, Cave Optical, Celestron, Questar, Dynascope and others. Witness the dawn of the space age from Sputnik through the first Apollo landing on the Moon. This set will provide many hours of relaxed enjoyment.
Some of the delightful highlights include the complete photographic series of “A Messier Album” by John H. Mallas and Evered Kreimer. Revisit Walter Scott Houston and he takes us through his Deep-Sky Wonders and Alika K. Herring sharing his wonderful observations of the Moon.
Since many of the early issues are quite rare given the recycling efforts during World War 2, some of the issues are professional facsimiles from University Microfilms International as follows:
Facsimile Copies:
Vol. 1. No. 1 November 1941
Vol. 1. No. 12 October 1942
Vol. 2, No. 2 December 1942
Vol. 3, No. 6 April 1944
Vol. V, No. 8 June 1946
Vol. V, No. 10 August 1946
Vol. VI, No. 1 November 1946
The overall condition of this collection is good. As can be expected, there are some imperfections that I will do my best to describe:
November 1945 - Some moisture damage at top of pages appears to have been made prior to binding.
April, May and June 1949 Some moisture damage although most pages are readable.
1949 - Some pages have sections clipped out.
Feel free to ask questions.
Asking $800 plus shipping. Payment by PayPal and I will incur the fees.

Selling to fund other projects.