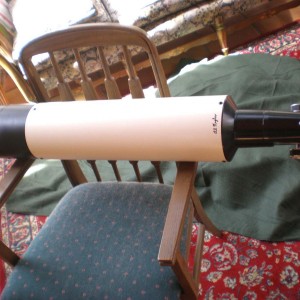 Tele Vue 140mm f/5 Apochromatic Rich Field Refractor.
Only 37 made.
This one has serial number 3 and is signed by Al Nagler.
Made in February, 1996.

History
In 1995 Clyde Bone of San Angelo, Texas wanted to make a 30" Mersenne telescope, but he needed a high quality f/5 refractor in the 5½" to 6" range to be the Mersenne scope's "eyepiece". There was not such a refractor available on the market.
He tried for a year to talk Al Nagler at Tele Vue into making one. Finally Al decided to make this refractor. After making only 37, he ceased production due to the difficulty of the process required to make it.
Clyde received the 3rd one that Tele Vue made. Its serial number is 140-3.
For 20 years this refractor served as the eyepiece for the 30" Mersenne scope, as well as being used independently. These scopes made many trips to the Texas Star Party and one to the Florida Star Party.
This refractor was taken from its padded Tele Vue case only when used for viewing. The rest of its life was spent in its case in a safe place.
When Clyde reached the age of 82 in 2010 he became unable to manage and use the 30" Mersenne scope and gave it and its refractor to me. Now nearing that age, I am unable to manage and use this large Mersenne scope. It has been retired and dismantled.

In January 2020 I sent the Tele Vue 140mm refractor to Tele Vue for a maintenance checkup prior to offering it for sale. They thoroughly inspected and serviced all aspects of it.
And Al Nagler signed the scope.
Letter of certification from Tele Vue regarding this service is included.
The scope is in perfect condition and is perfectly collimated. It makes spectacular images.