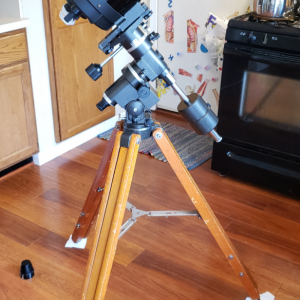 UPDATE: I've been having requests mostly to part this out. I am going to let this ad run until April 23rd and will consider splitting this into 3 ads (Mount/Tripod/OTA). I still prefer some type of local sale for splitting it up so if you are local speak up early. Thanks.

Greetings Everyone,
I am very tempted to keep the mount/tripod but feel bad separating everything. Before I go upgrading the mount saddle just so I can use it for my other scopes, I figured I'd take a shot and see if there was any interest in the entire setup so I don't have to separate anything.

Photo album: https://www.cloudyni...per-polaris-c8/
Celestron/Vixen Super Polaris Mount:C8 OTA:Extras:Local pickup preferred. Shipping might be difficult and maybe the cost would wouldn't make much sense for this package but if you are willing to pay I'll leave that up to you.

Thanks for your time