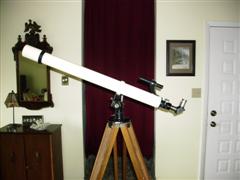 Well I managed to contact the guy who won the Sears telescope on Ebay.As suspected he once owned one of these scope as a youth back in 1966.I invited him to join the group and told him what a fine bunch of veteran astronomers we have at the fourm

His name is Roy Tucker so let's keep an eye out for him.
Bruce

What did these Sears scopes go for new in the mid-60's? My 10TE Tasco cost $199.99 new back then. I suppose the price would have been similar.

Keith ,
I found some info on the net a while back about prices
The Sears Discoverer Model #6339-A (and similar models #6335 & 6344) 3" F/16 equatorials refractor was advertised from 1961 until 1974 for an average selling price of $200.00
Anything short of buying a old Sears catalog off Ebay which would be kind of neat people collect that stuff to.Althought the article says that current market value for these scopes would be $325-$400.I would think that would be the case for a telescope in the condition this one was in.
Bruce

Gee, so you're the folks I was bidding against, huh? Thanks a lot, guys. Let me return the favor sometime. ;^)

I'd been looking for one of these for about a year now and this is the first one that I've seen in such good condition and so complete, so of course I had to get it.

The one I got for Christmas in 1966 was not from Sears but was procured through a friend of the family who worked for Bausch and Lomb. It was a deluxe model with a pedestal instead of a tripod, a clock drive, and a second finder, 6x30, on the focuser structure. The brand name was "Scope" and was supported by the Berkey Photo company in New York, as I recall. Price in 1966 was about $180, almost the equivalent of $1500 now. I was brand new at the hobby at the time and didn't realize the instructions for using the setting circles were hokey, something about subtracting the difference in RA between the object I'm looking for and the sidereal time. In retrospect, I realize now that the RA circle was for the southern hemisphere.

Hi Roy,
Welcome to Cloudy Nights. Congratulations on your new telescope. It's a beauty. Tell us how it sees when you get it set up and post pics if possible. -Ken

Congrats on being high bidder, Roy. Welcome to CN, the Classic forum and its unique assortment of characters...er..collectors. Please post some glam shots when you get a chance, we're all looking forward to see this scope up close.

I've spent some time in Tucson, way back when Nixon was president. Is Caruso's on 4th street and the Green Dolphin Bar still the student's hangout?

Thats why you need to come to NJ. I think its a 15te but I cant tell a 10 from a 15. One thing I did see was the cancelled check.It had to be real cause the check canel was perferated with holes.
Bill

Thanks for the congrats. I'm eager for it to arrive and I can start remembering old times.

I'm not familiar with Caruso's but I lived down the street from the Green Dolphin for a while. It's changed hands and is called something else now. You might scarcely recognize Tucson now. It's changed greatly since I first came here in 1979.

Welcome to Cloudy Nights Roy. This is a wonderful community and resource for all things astronomical. Congratulations on the new baby.

We're all happy for you

. I always hope that every auction I lose is hopefully one less person I'll have to bid against next time unless they're a scope-hording astronut. My turn will come some day soon I hope.

Hey Bill,
If I remember correctly the only difference between the Tasco 10TE and the 15TE is that the 15TE came with the motor drive ,other than that it's the same scope.
Hello Roy I knew you find us

Welcome aboard Roy!! I like ya' and I have no interest at stake here. All those other guys just want to be remembered in your will!

Some of them probabably would like to be adopted but they're likely to old.

Enjoy the telescope and start sharing with pics and commentary. Mike :rofl5: