Thanks for the compliment. I like pastels with the blending and all that I can do with them. I might try some pencil sketches sometime as well.
Maybe in a week or two I will post some more sketches up after I get my objective from surplus shed.

I think that a good sketch...easily recognizable and nice use of shading. Well done!

Hey...I like that Saturn sketch. The ringed planet is always a favorite!

My first sketch is made on February 2, last year. It's one frome the Orion Nebula through my 7cm refractor.

Nice topic by the way!

I'm glad that you added your first sketch.

When I compare it with the sketches (M42 in particular) from your webpage, I'm amazed with the progress that you made in one year.

Keep up the good work!

If ever there would have been a time to start sketching it was last night as Io's shadow passed just above Jupiter's GRS. Alas, sketching really is not among my talents.

Iâ€™m embarrased, but I hope this help to the beginners. Here is my first scketch. It was M67 on March 2007. I attach my last version as well:

The second one was Saturn...

Nothing to be embarrassed about in the least. I think one of the greatest aspects of this thread is to share with and show others our first sketches; and to show, visually, that all of us started somewhere.

For myself (and many others here as well); it isn't the finished product that we enjoy per se, but more so just seeing and sharing in the excitement of others as they attempt their own EP sketches of the wonders of the night-sky.

Thanks for sharing your first sketch with others here.

I have always had an interest in the beauty of the night sky. I have sketched and painted for as long as I can remember.
For whatever reason these two passions remained separate until 2005. That was the year these two huge loves in my life came together and exploded. I was encouraged by a friend who sketched astronomical objects , so I began with the moon.

Moon phase sketches December 6th ,10th 12th 2005
Pencil EXT 70 12mm eyepiece,29X
At least this telescope had tracking, it was the only thing I liked about it. I started my lunar adventure with this small scope until I bought an 8 inch dob with no tracking , the larger views more than made up for the lack of tracking.

My interest in lunar sketching developed further when I decided to use pastels and conte to do my drawings. Here is a full phase sketch from earlier this year.

Even your first sketches are wonderful. The moon from early in this year looks like it is made of moon crust. Great Stuff!

Great topic and very useful and interesting for all of us--thanks, Rony! This thread demonstrates what a great place the Web is for learning (more on that later).

I didn't sketch my observations until the year 2000 when it dawned on me that it would improve my observing skills (still the best reason to sketch, imo). Very rudimentary at first, my interest in sketching really took off during the 2003 Mars apparition when I met veteran observers Carlos Hernandez and Jeff Beish via the Internet over on Astromart. They were posting sketches and discussing their Mars observations and were quite welcoming to novices like me. Sol Robbins was also posting on AM and it was clear that he was going to be Rookie of the Year.

I thought what they were doing was very cool and I wanted to do it too.

Because of web discussions there and then later here on CN, I learned about using templates, blending stumps, paper, web presentation, and a host of other media and techniques. My learning continues everytime I log on. I've also made some lasting friendships and had some great times sharing sketches, observations, ideas, and anecdotes.

So here are my first sketches. Check out the Mars sketch--I'll post my most recent Mars observation as a comparison.

You have used a sense of brevity in capturing the important features, leaving out the scattering of thousands of minor craters in the central area. The sign of a great artist! I like the three dimensional effect as you seemed to utilize illumination and 'angle of incidence of light' very well. Unlike me, I try to include every detail in my whole moon sketches and thus tend to overwork my sketch at times.

I am not sure what Rony meant by our very first sketch but it is a great idea as a post to be learned from as we share our early attempts; possibly a good tutorial here for amateurs to glean from. Your lunar art here reminds me of some of the attempts that I have made in the past few months as my first for the whole moon category. I guess I could post one here as a first lunar sketch but I made a rough one a couple years ago before I knew of the CN site (it can be seen in my latter gallery pages joined to a Saturn sketch and the artists hand in the sketch- link below.) Yours also reminds me of the quality in the full image renderings that Rich Handy is known for. I started exclusively with the solar surface through an h-alpha filtered telescope in October 2006 after seeing Erika Rix and Les Cowleyâ€™s sketch work in Spaceweather.com and just recently discovered the moon as an art form. There are just so many more surface details to render from the moon that I am stuck on it now.

I guess I have missed your posts and your gallery. I'll have to take a look. I am still one who has never used Conte yet as I have favored only dry pastel chalks. The blending on your lunar sketch here is great. I would look forward to hearing something about your technique and methods with Conte. (Is this Conte Crayon? I accidentally used it on my last entry, then did not know how to blend it as I do with dry pastel chalk.) Also, can you indicate the paper format type and size and the lunar disc diameter?

Thanks for sharing this,

Thank you for your participation with your first sketch!

And an excellent last sketch as well.

Thank you so much for your story and these wonderful sketches!

I guess that a small tutorial on your last sketch will interest all of us.

Thank you for going back in time and sharing your first sketches.

This is my first sketch and record. 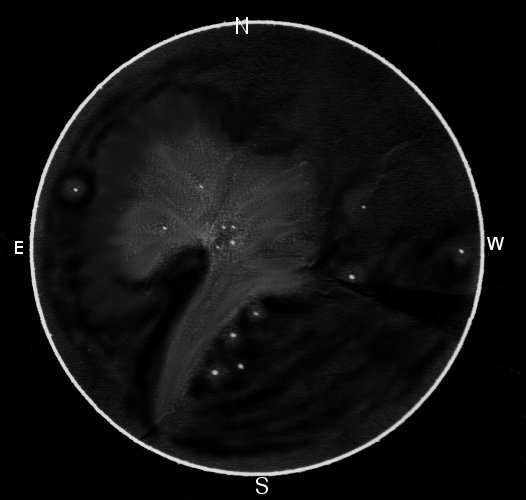 Hi Kim, and Welcome to the forum.

In case your sketch does not show up properly, I have included it in this reply.
Am I right that it is the central region of the Orion nebula?

It is a great first sketch.

Can you tell us when was it made, and what your equipment is?

And here is NGC 205 after I digitized it:

Welcome to the forum!

Thank you for sharing these first sketches of yours. Looks like you had a wonderful observing session.

I would say that you made a very good start and I hope to see more sketches from your hand.

I wish I could find my [very first] as that would probably be from about 1970 as a 16 year old as I observed Mars on a close approach year through my first telescope; a Tasco 60mm refractor, and was able to see some surface markings and the south polar cap. I did it in color on school notebook paper. That sketch is possibly in storage somewhere as I moved recently.

If you mean my very first that is from adult life and it was published no less to Spaceweather.com's front page for several days which then started a sketching contest in the site on my suggestion to NASA's Dr. Tony Phillips. Yes there is a full circle story to this. I was inspired to do it when I saw Erika's and Les Cowley's black and white solar sketches in Spaceweather that afternoon. I remade mine in color pastels later that night from memory from an earlier pencil sketch and live observation through my solar telescope which I have never posted- It is a two image sketch as the solar prominence changed over 20 minutes, so this is an exclusive to your posted thread here today. Something I have never posted or shared as yet.

Following the pencil sketch is the famed wild pastel abstract that stunned the world in Spaceweather, which I did on a scrap of old wrinkled 11" X 14" black pastel paper. It stunned the world, weaned on mostly digital photos in Spaceweather before this work. A few days later another of my surreal pastels apeared in APOD- I have received many unusual responses to that one; The Hand Drawn Transit of Mercury on Nov 8 2006- APOD ran it on Nov 17 2006- This version also has attached, the several photo images I took of the sun over some months; the second from left is the event that I sketched- The prominence at 9 o'clock position -Mark

Thank you for your kind support on this threat! Your 'field sketch' is a great example of how to record fast changing features with pencils, and how a field sketch can be turned into a beautiful pastel sketch.

My first one, almost exactly 2 years ago:

And my most recent one (a few days ago):