Something for nothing: Celestron C90

I just mount the scope and not worry about the position of the finder.  It may be in an unconventional position but it works fine for me.  The finder doesn't hit the mount.  YMMV.

The C90 is like the ST80:  most every amateur astronomy has one at least once ... maybe twice!

I sold mine last year, and I'm thinking I'd like to get another one. It made for a quick telephoto lens.

Is it advantageous, and does anyone still use additional flocking for the primary baffle? Or have the newer models improved on that, if anyone knows?

Good question Joe.  The ones I have had in the past all had excellent optics for the most part but the inside of the primary baffle tube was quite reflective at grazing angles. I, too, am curious if this has been fixed. I found the baffle tube was just too small to get any type of flocking material into it without it buckling. I could not get it to form to the wall of the tube evenly. I had the same issue with an older ETX and, since I had it completely apart, I glued a piece of fine sandpaper to a dowel that just fit into the baffle tube.  I sanded the inside of the tube by putting the dowel in a slow drill and then moving the tube assembly back and forth on the spinning dowel.  It really helped reduce the oblique reflections. The only Mak that I was 100% successful with getting the flocking material to close form to the inside of the baffle tube was my 127 Mak. It was a felt cloth with no backing.

That deal at Optics Planet is a good one! This is cheaper than a lot of those department store disasters.

Thanks, Frank! That is a very good price for the scope.

I've haven't read anything on the primary baffle issue. But if you ever want a foolproof method to flock the tube of 90mm Maks, myself and several others developed a way to do it. I have it all documented. In fact I did that to the Bresser 127mm Mak. It was a little easier being larger.

As you did, we used non-stick paper, specifically Edmund flock paper which is the absolute thinnest flock paper in existence. And I have plenty of if you need any. The cutting and application technique is where we were able to make the process doable, if just a little tedious.

Is it advantageous, and does anyone still use additional flocking for the primary baffle? Or have the newer models improved on that, if anyone knows?


Mine is a little over a year old, and it had the shiny baffle problem. The thin Edmund flock paper did the trick. If you search back in this thread, someone provided clear instructions with approximate dimensions. Took about 5 mins and greatly improved contrast.

Thanks for the update on that, Jim.

That old post may have been me. When a few of us got together and documented the process we found to work, we also had a starting set is dimensions. Glad to hear it worked for you!

Thanks for the update on that, Jim.

That old post may have been me. When a few of us got together and documented the process we found to work, we also had a starting set is dimensions. Glad to hear it worked for you!

Joe - haha, yep. It was you. Amazing how much more capable the browser version of this site is than the mobile version (where I usually access it) - and a quick search in the thread unearthed this from three years ago:

Don't try finding something in this thread on your phone, folks... :-)

I sold mine last year, and I'm thinking I'd like to get another one. It made for a quick telephoto lens.

For a second, I thought you were the same guy that took this photo.

Lot there for a buck-twenty five, Frank!

Extra Credit:  Can you explain why?

Because the C90 costs peanuts to make in China? If you send one in for warranty claim, it's probably cheaper for them to send you a new one.

I’ll wait a It a little to see if any others respond.

It has to so with it being sold as a spotting scope, instead of an Astro scope. Not sure why the distinction, but I think all their spotters have lifetime warranties.

That is correct Jim!

Most spotting scopes come with a lifetime warranty. If Celestron’s warranty were anything less, it would be a negative selling point for their spotting scopes.

With astronomy scopes, however, most do not have lifetime warranties, with some exceptions. Therefore the length of the warranty is not as much of a deal breaker, as it would be with spotting scopes.

It just seems odd that their most expensive scopes have warranties much shorter than the C-90.

Thanks Jim and Boom! Hope you and others found this interesting.

Good stuff! What did I win?

I've been reading a bit about star testing, and have done some homework on my Z114.

Last night I went out with the intention of star testing my C90, but what ended up happening is a group of 4 young girls from the neighborhood saw Jupiter, two of them repeatedly at various magnifications.

Which is a good thing, since today I find out that Gregory maksutovs are a "special case" regarding star testing (see here) that should not provide exactly identical images slightly in and out of focus, because a higher (6th) order aberration from the corrector needs to be balanced by a lower (4th) order aberration from the mirrors, but all is well at focus, leading to a...

The Suiter book talks about this as well, but I haven't read that yet. Posts at CN speak of star testing Maks being difficult because of this, with posts saying "I don't star test maks".

So I wonder: ¿How do you assess the optical quality of your C90?

There are several bench tests that can be used, but I wouldn’t bother. There is a saying that goes...

“Many good telescopes have been ruined by optical testing.”

My personal feeling follows a guide given by Mel Bartels, and it uses, of all things, Performance as a criteria. He is referring to Newtonian scope mirrors but the same can be said of complete scopes. This is what he says...

Another qualitative method, though it does demonstrate the MTF (modulation transfer function). A low contrast object such as Jupiter is selected, and a series of magnifications are run through. At some point, the image will 'roll-off' beginning to lose it sharpness. Dividing this magnification by the aperture gives a rating, for example, a mirror is good to 50x per inch of aperture.

Here is my scale:

For a longer focus instrument, such as a Mak, you might add 5x to 10x per inch to be more accurate.

For a high contrast object such as the moon, again use somewhat higher numbers, such as,

The roll-off magnification is where you see the object start to lose its sharpness and starts to become soft.

This is done, of course in good seeing.

I think this is a good and direct way of assessing scope performance without complicated and often misleading testing. This goes by “what you actually see.”

Some will say their scope will hold sharpness up to 100x per inch or 125x per inch. Don’t let that influence your assessment of your scope. And to reach those levels you would have to have near perfect seeing. So take claims of super performance with a 50gal drum of salt.

This is an interesting and more pragmatic criteria and my experiences seems to verify it, especially at the "excellent" end of the test spectrum.  I have had several Synta made 90mm Maks and a couple of the older ETX90s that would easily handle a 6 mm eyepiece (208X) without loosing any detail on nights of steady seeing. My 102 Mak has no trouble with the 6mm either (216X). My old 127 Mak does fine at 250X and it has been tested on an interferometer to better than 1/8 wave in green light.  I need to check out the 150 Mak a little more but that same 6mm eyepiece didn't do bad at all on Jupiter about a week ago, even with some turbulance.

Very good, Frank. For me, not having access to high end test equipment and always being unsure with the star test (nothing looks like the photos in Suiter’s book), I feel it’s a good general and easy way to assess what you’re dealing with.

I was into testing a couple years ago, but found I was testing and not observing!

Actually since this thread has been revived, I took the little guy out last night for Jupiter and Saturn...  Always am impressed with the value this scope provides.

Below is my current travel rig: 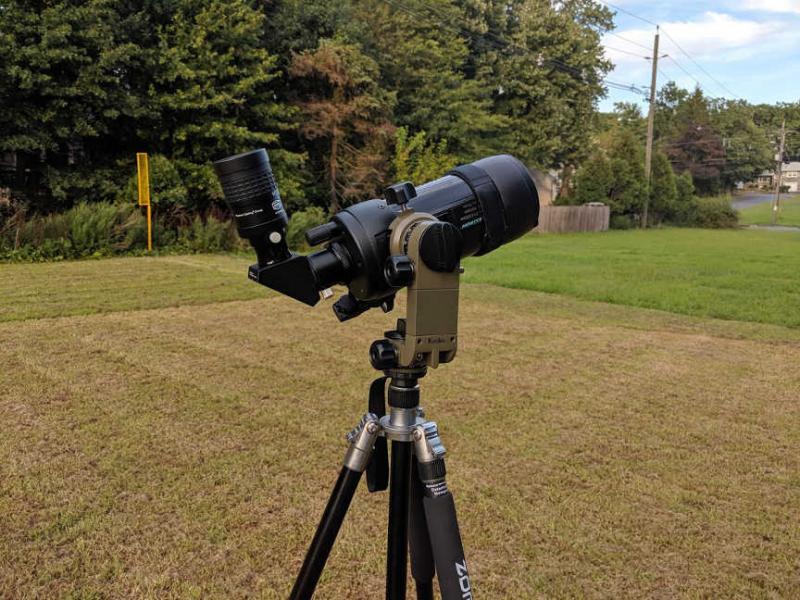 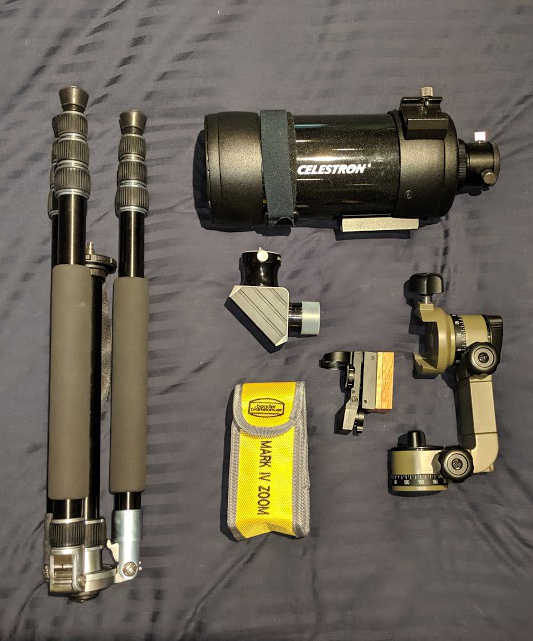 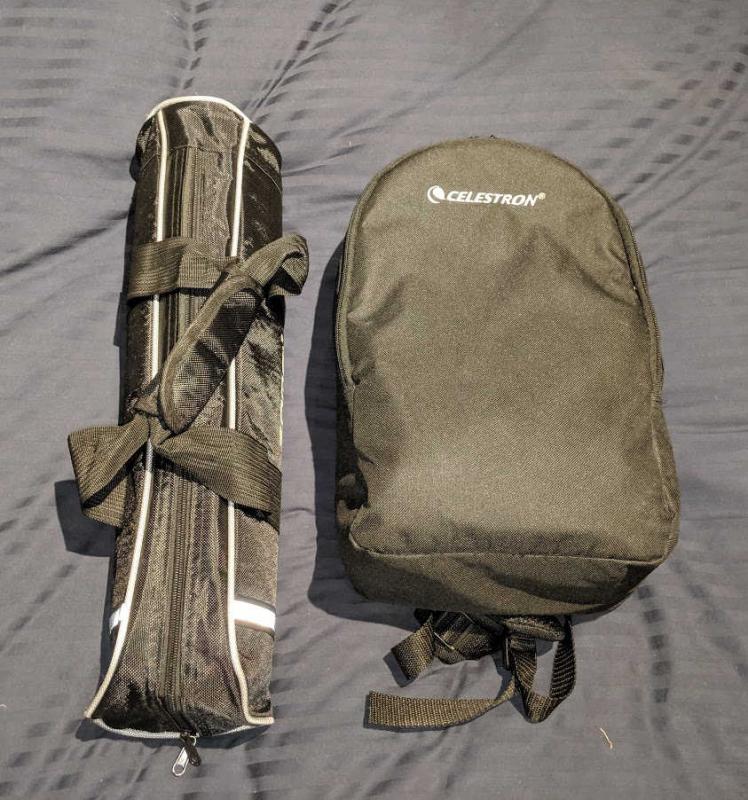