Started by Mike Moffatt , Jul 31 2005 10:35 PM
This topic has been archived. This means that you cannot reply to this topic.
18 replies to this topic

Finally bought a pair of binos to go with my 6" Newt and found out right away if you want to spend much time at all with them you have to have some sort of mount even for the 15 x 70s. Found the Starchair 3000 on the internet but at $4950.00 it's way out of my reach. Soooooooooo..... since the project is as important as having the toys for me I built the "R.A.C. 1000"

It is the prototype, predecessor to the R.A.C. 9000 which will be motorized and trailer mounted.

Here's a link to the rest of the photos:
http://www.tulsawalk...lescope/rac1000

Well done Mike. I see you ran into and solved the same problems I did concerning bearing size and tension, vibration and headrest attachment, but differently. Many ways to approach binochair construction. Thanks for posting pics and design info.

Mike, how is the RAC 1000 tensioned? In other words, how do you adjust the position of the binocular, by loosening the nuts then re-tightening them up?

It uses nylon washers that even when under compression, will allow the arms to move easily, but hold the binos in place. I've used a similar mechanism, but with Mechanical Grade PTFE (teflon).


...but a little beefier in the counter balance department.

The arms are tensioned simply by tightening the nut and bolt until stiff enough. Spent nearly an hour playing with fender washer, nylon washer spacing and order to get it. Initially I was depending on the nylon lock nut to keep the bolt/nut combo from loosening. Finally tried a jam nut which help some but it still loosened until I found a combination of washer order that worked.

The difficult part of this was controlling where the slip happened. The bolt turned, didn't turn, the inside slips and one outside, the inside and both outsides etc. etc. Finally determined can't control it so had to get the whole assembly tight enough to hold the weight and slip wherever it wanted without loosening.

The top mount plate bolts I had were not long enough for jam nuts and it loosens. Next trip to Lowe's I'll pick up some longer ones.

Went to a plastic supplier today and bought some 1/4" mechanical CHMW to replace the record used for the azimuth bearing on my 6" dob. Will have some drop so plan on cutting some bearings for the chair and trying that. It is much harder than the nylon and WAY more slick. I replaced the azimuth bearing on the dob tonight and OMG! I can't imagine the azimuth slewing any better.

How is it tensioned and positioned?

Tremendous amount of tight on the nuts and bolts, way more than one would think. No, there is no loosening to move, was able to get the tension adjusted so can move the mount and it still hold once positioned. Understand, it's not a smooth mount but with the FOV on the binos and the elevation and azimuth slewing actually being accomplished with the chair it doesn't matter.

Notice in the second picture how the mount plate moves. The entire mount is articulated at three points. The bolt washer combination on the mount plate is not correct. I ran out of washers and didn't have bolts long enough, will fix that soon. However, several hours of continuous use last night by myself and two other people and I only had to tighten the top mount bearings once.

How much weight will it hold? I don't know, but think it would stand up to appreciably more than the Celestron 15 x 70s I use with it.

Any details, pics or etc. on your design yet or is it still an industrial secret?

This really is a neat job you've done on this mount. Good close-up shots.

One way to tell how much weight it will carry is to attach weights of some kind to the saddle until it starts drooping. I've found to get extra support (on my bino bed project) is to add an extra arm to one pair of the swingarms that runs from the saddle bolt (or near it) down to the lower swingarm forming a triangle which can be and use a female clamping knob to tighten. You can then take some of the compression load off of the middle swingarm and saddle bolts and washers. The lowest swingarm bolts on the vertical supports still needs to be tight though.

Also I noticed the binos sit very high on the saddle plate. If you change the flat saddle to a squared U-shape you will lower the binos center of gravity and they will balance better with less tension on the bolts and washers.

Good idea, hadn't thought of that. The adapter supplied by Celestron with the binos is pretty poor. It twists and I can see my heartbeat in the view which is why the neck pillow stabilizer right now. Was planning on making my own out of an aluminum block but now will have to give some thought to moving it down like you suggested at the same time. Your dropped idea would solve another problem I'm having I think. There isn't much visability around the binos in my setup and if you need a glance at the sky you have to just slide the mount down out of the way. If the drop was wide enough I could at least get a peak on either side of the binos without moving everything.

I read where if you fill the recesses of the plastic tripod adapters with epoxy, they will stiffen up quite a bit. I've got a plastic one I've been meaning to do that to. 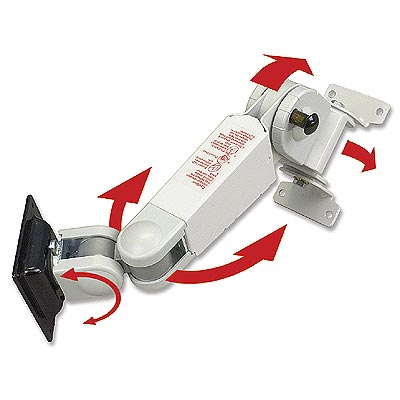 I am thinking maybe I can adapt this LCD monitor wall mount to my Celestron 25X100 binocular. If it handles a LCD monitor it should handle my binocular too.

Thanks for posting that pic and link. I've been looking for something like that that doesn't cost an arm and a leg. Some of those monitor mounts can carry huge loads.

But this one is even cheaper 30$ and it supports 55lb! 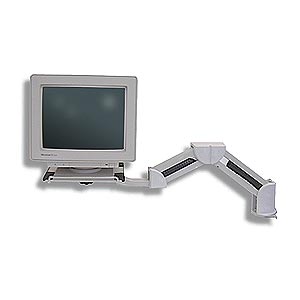 I just ordered the $30 one. $15 shipping though, but still a good deal. I think I can adapt this to one of my Bino Pods. With the three pivot points, it allows better side to side motion than the first one. If it doesn't work, I can always use it with one of my monitors.

Craig, post some pictures when you get it done. I'm still gathering ideeas for what I'd like to build.