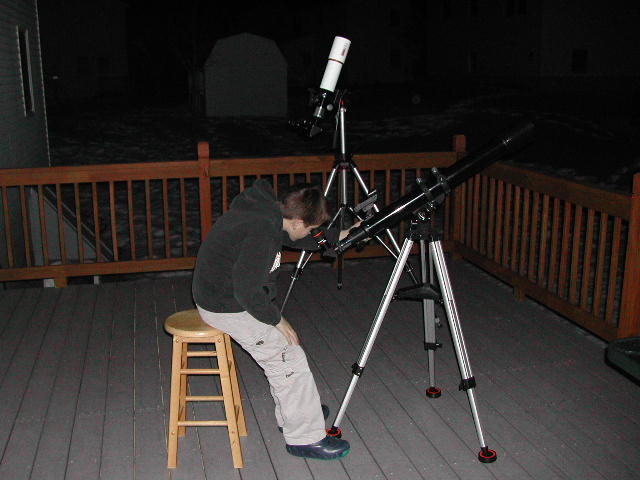 Hello,
My wife (bless her) gave me a C6N for Christmas. However, it has a label on the tube that says C150-HD, and the instruction manual also says C150-HD on the cover. On other forums, I've read that the C150-HD was discontinued, and pictures I've seen on the web of the C150-HD clearly indicates a 'short-tube'. Mine is definitely not a short-tube, nor does it have that corrector lens in front of the mirror that the description of the C150-HD mentions. Also, my manual says that my scope is a 750mm f/5, while the C150-HD is/was a 1000mm f/7.

Is this just a case of Celestron's OEM not getting the
documentation/labeling updated?

Let me know when you figure this out Ken... I have that same scope, and have been very happy with it.

Have you used yours for planetary viewing? If so, how has the performance been?

So far, I've been a little disappointed with it when viewing Saturn and Jupiter. Of course, this is probably due to a combination of my lack of experience with seeing conditions, my expectations, and a poorly collimated scope.

We had one night of exceptionally good seeing a couple of weeks back that let me look at Saturn at 250x (6mm+barlow) for a couple of hours. Cassinni was a dark black line, several cloud bands, Crepe ring visible against the disc, and a hint of the shadow on the rings on the southwest limb. I'd say that was pretty good performance! Monday night wasn't nearly so good--it was like looking through an autofocus camera as it tries to find focus. Seeing, for me, seems to be more limiting than the scope itself.

I first looked at Jupiter through this scope back in December. North and South eq belts very distinct, all 4 moons clear, no sign of the GRS (but I don't know if it was visible at the time). Did I mention that the sun was already up?

At f/5, collimation is supposed to be crucial, but I've gotten away thus far with just a sight cap made from a 35mm film canister.

Celestron Changes C150-HD
Ever since it was introduced, Celestron's imported 6-inch (15-cm) C150-HD Newtonian reflector used a "relay lens" (a.k.a. Barlow lens) permanently mounted in the focuser to stretch the short focal length of the instrument's primary mirror to f/7, in an effort to package a "normal" focal length into a smaller, and therefore, easier to carry instrument.

As nice as that sounds, owner reports far and wide universally condemned the optical configuration. Image quality, sharpness, and contrast suffered mightily when compared to a conventional Newtonian (that is, sans relay lens).

Recently, Celestron seems to have conceded that the layout is probably a bad idea after all. Quietly, they recently reintroduced the C150-HD as an f/5 instrument, configured without a relay lens. The result is now a nice telescope that should provide some wonderful views of deep-sky objects. The shorter focal length may make it less suitable for high-powered planetary viewing than a similar aperture with a longer focal length, but the compact size will be welcome by apartment dwellers and others who may be tight on storage space. As before, the C-150HD comes on the CG-4 equatorial mount.

The C150-HD compares closely to Orion Telescope's AstroView 6 EQ and Skywatcher 15075PEQ3-2, all of which are made by Synta in China.

Thanks Stacey. That clears up the confusion.