All the lens are finished. And the images below shows them after the cleaning. Thanks Simon! And enjoy the projects.

And here is a reconstruction of the long refractor, which had been done about 7 years earlier. It is in solar projections mode and of course, in a provisional form and personal use. This to get a better idea. But the easiest way to use the long lens in visual observations (with an eyepiece) is in Huygens type. 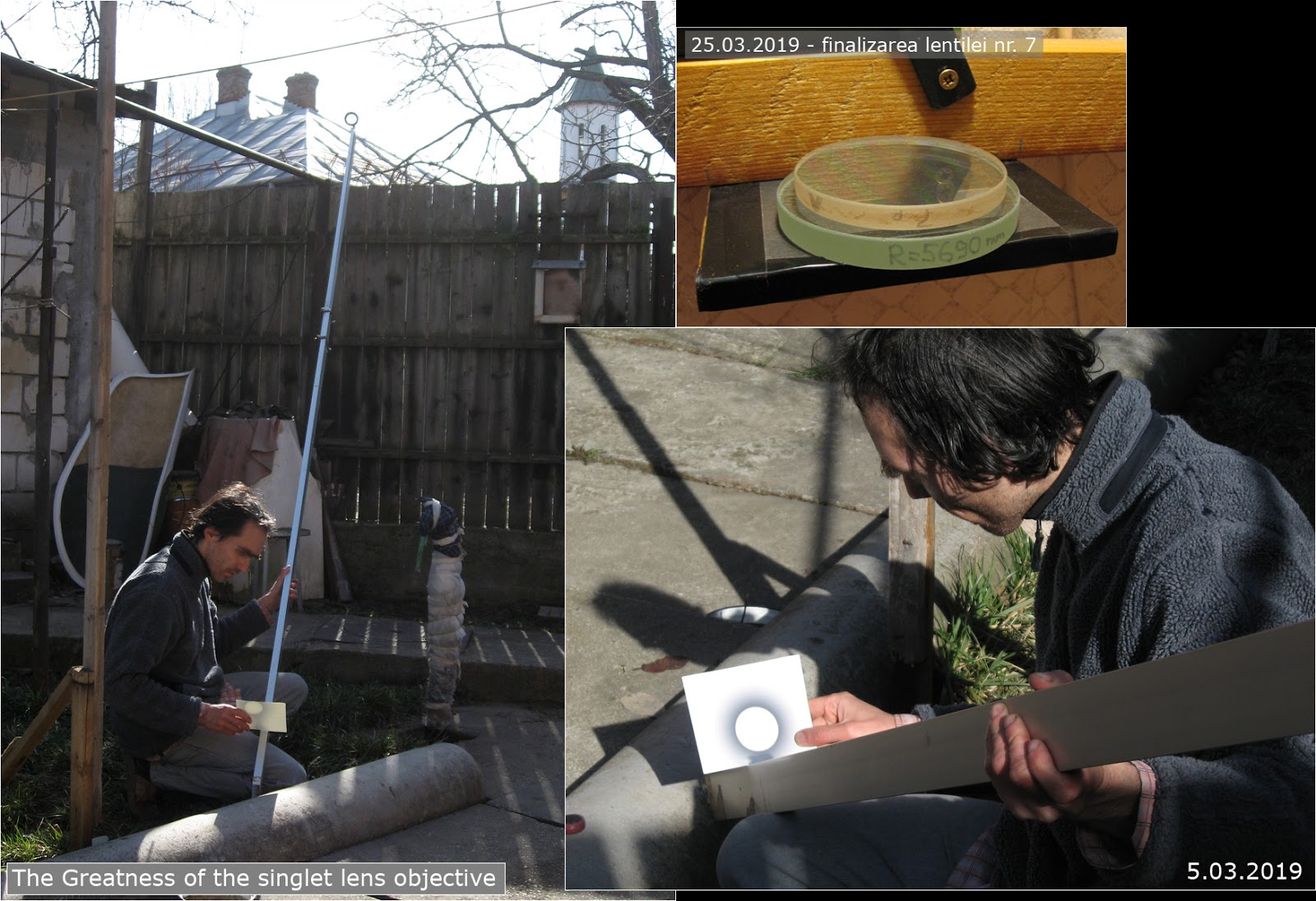 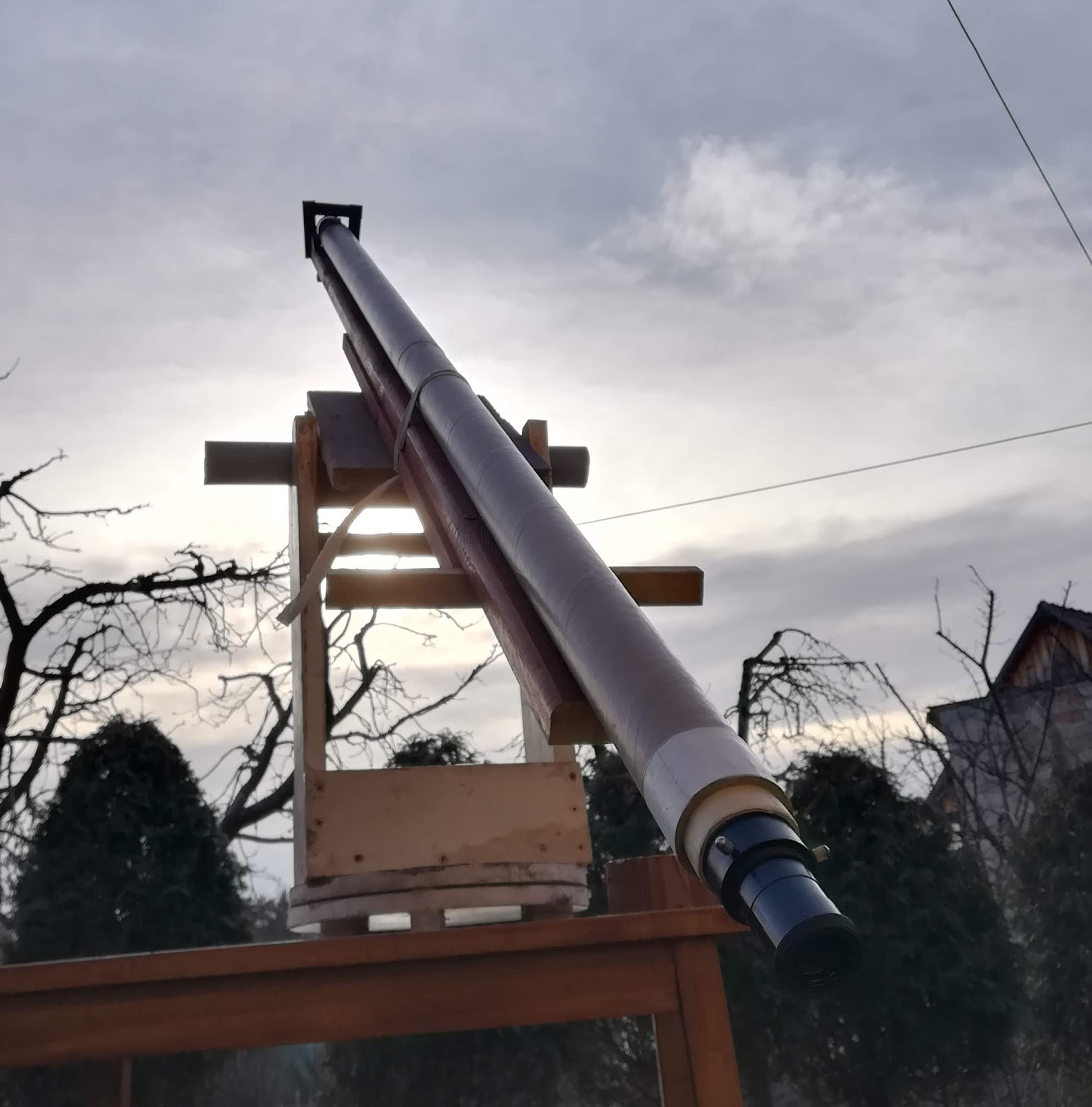 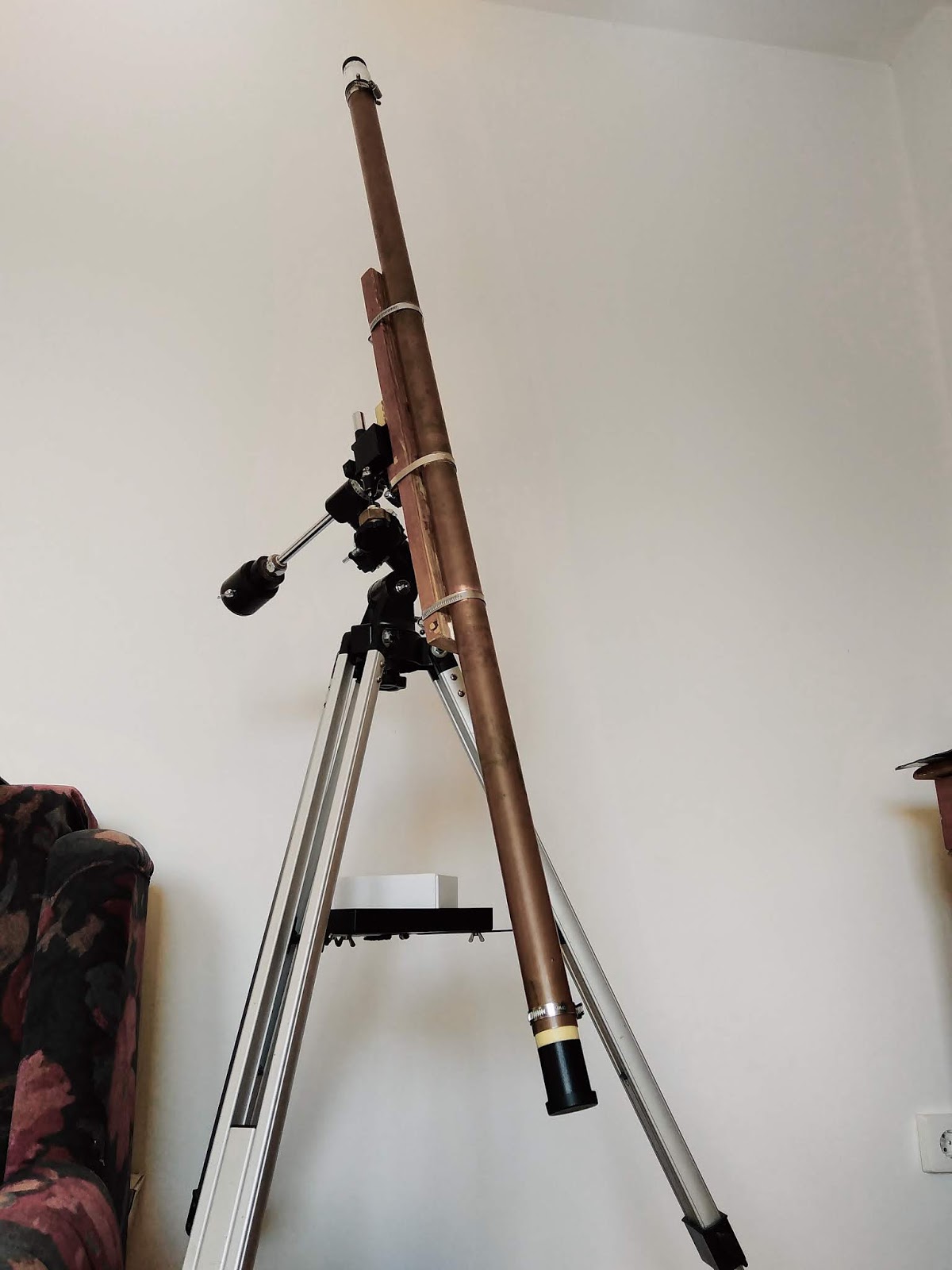 The large 26/2000 refractor in observations with the Optical man. 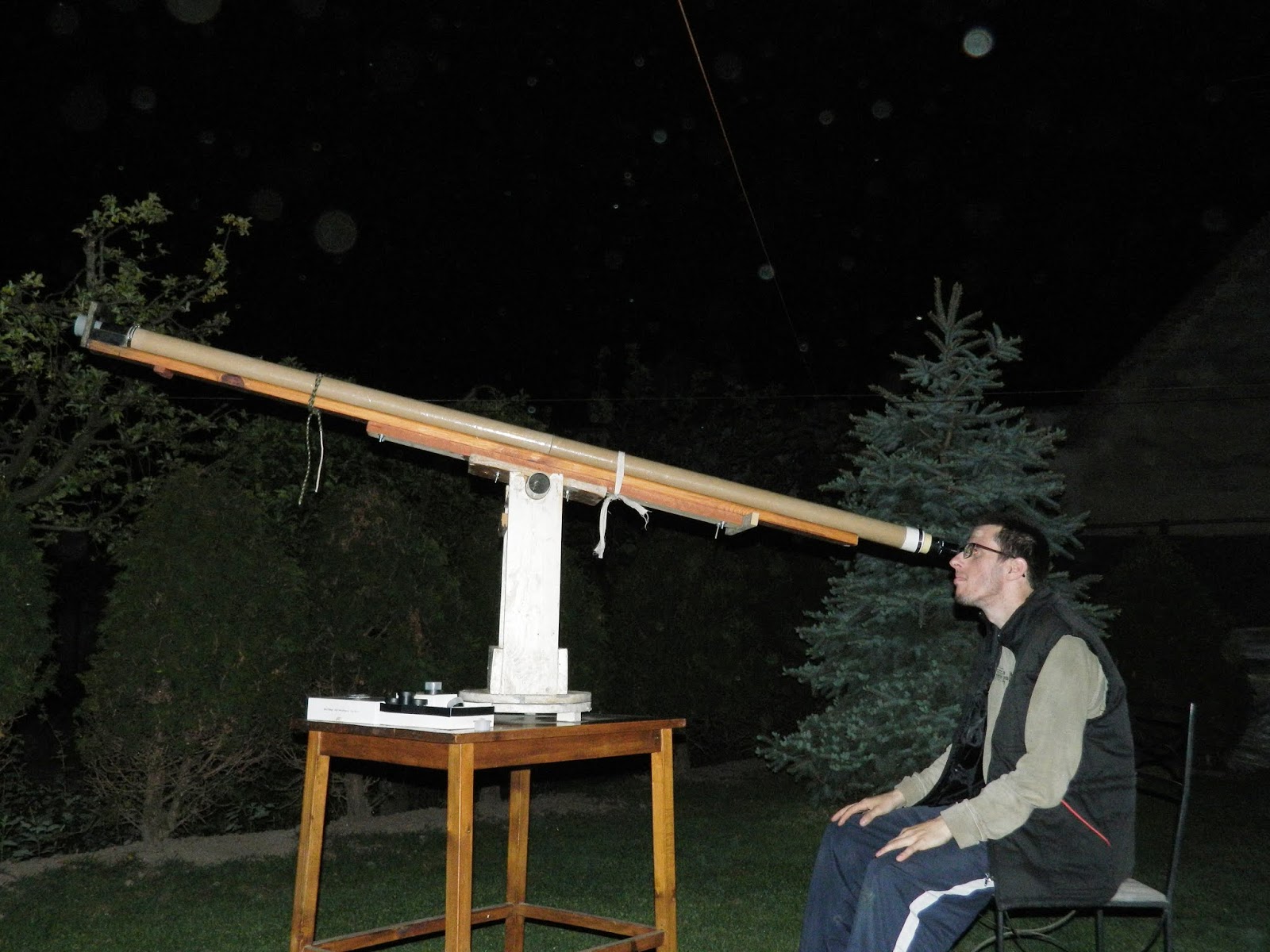 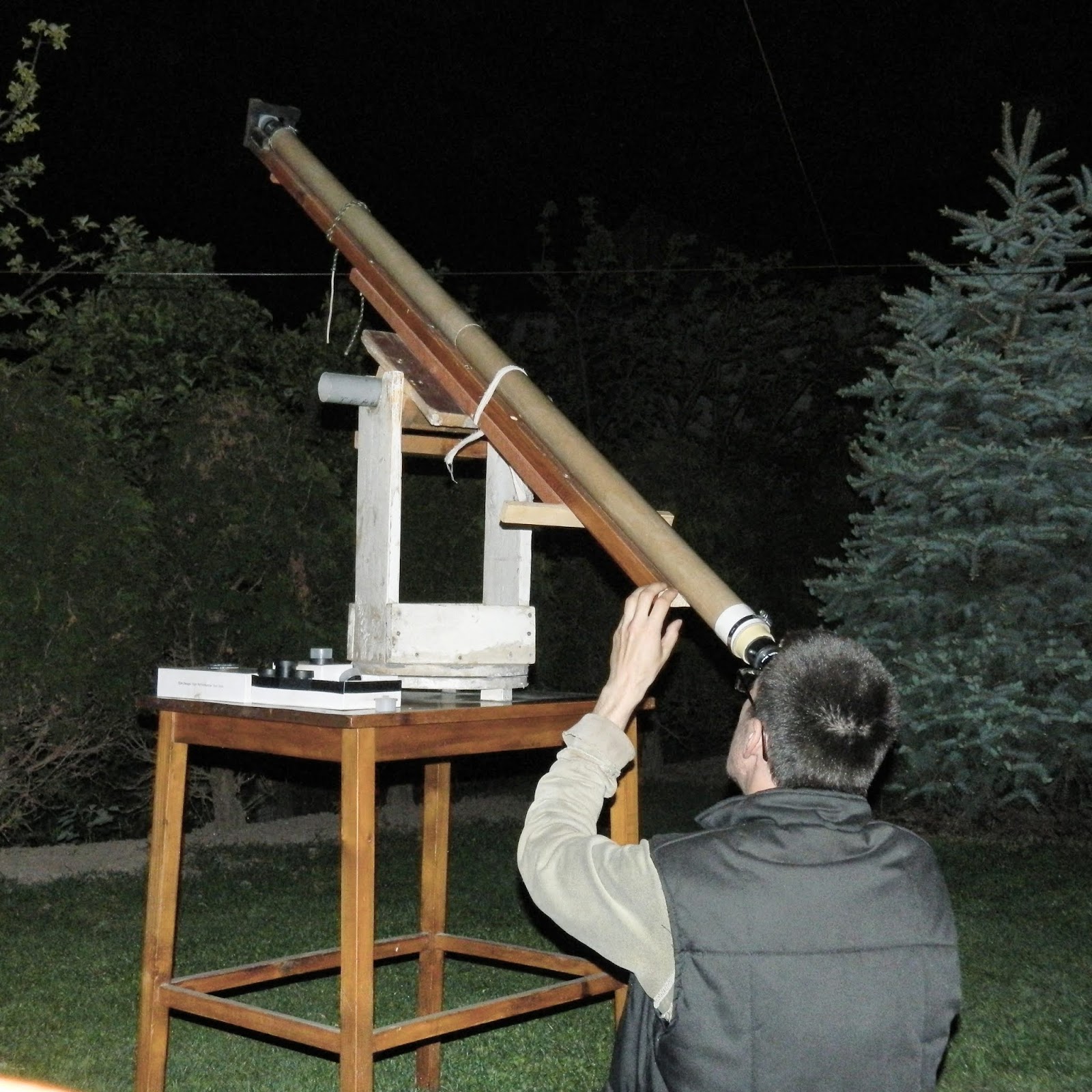 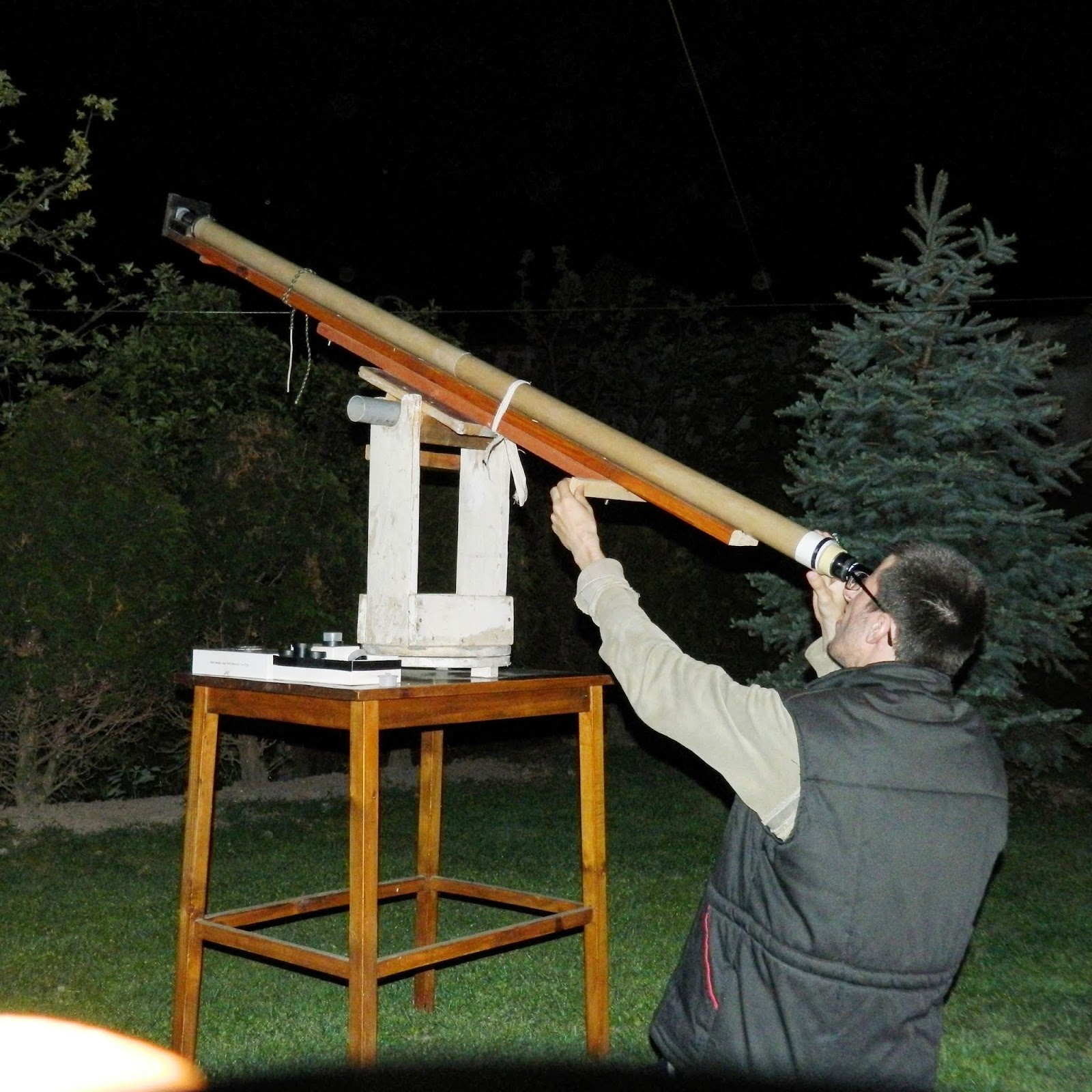 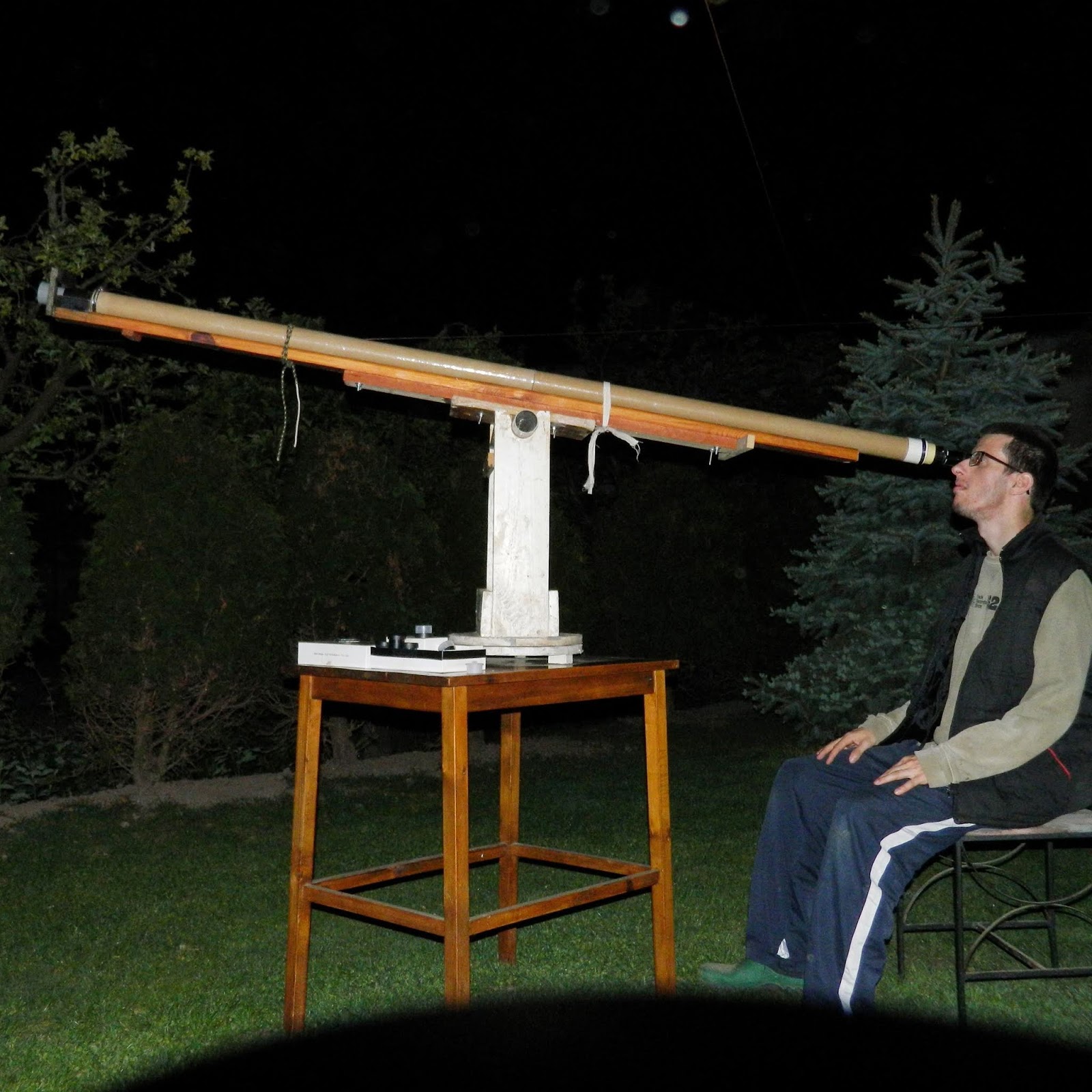 @Ovidiu Catalin: Thanks, but I think it's enough here. On this CN forum, there is a section dedicated for ATM, where anyone can show his own work with home-made optics (by himself or orhers) or from different commercial suppliers.

Thanks again for the understanding and keep on with your projects!

Picked up the lenses from post office this afternoon. Well packed and all four look nice - thank you Tavi.

Will give an update when I get a chance to start a project. 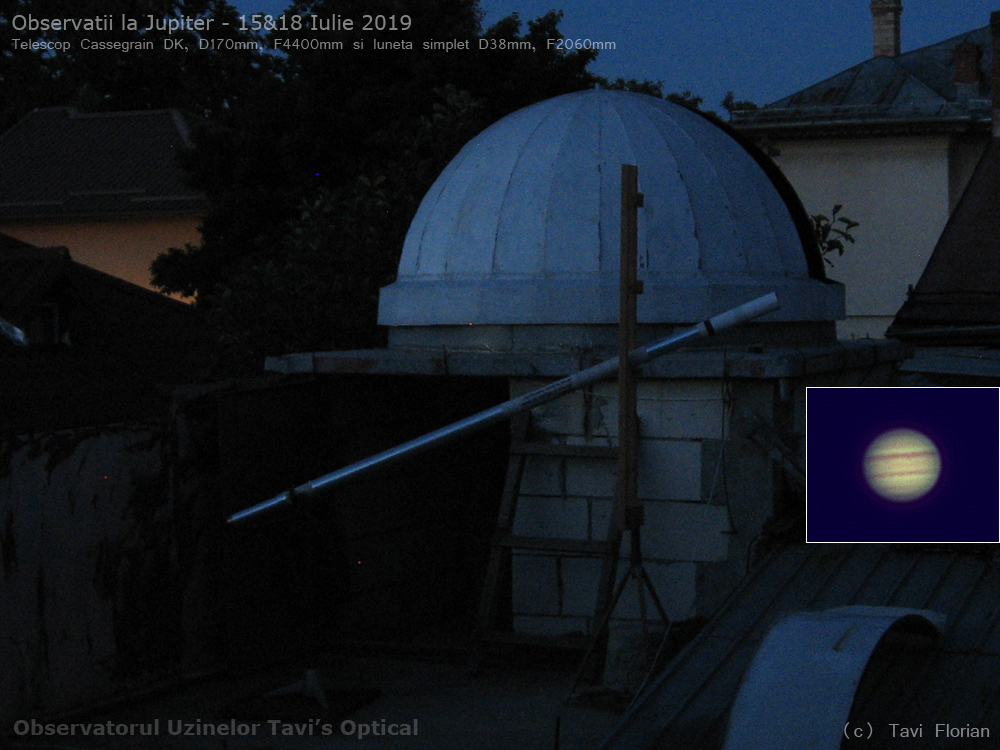 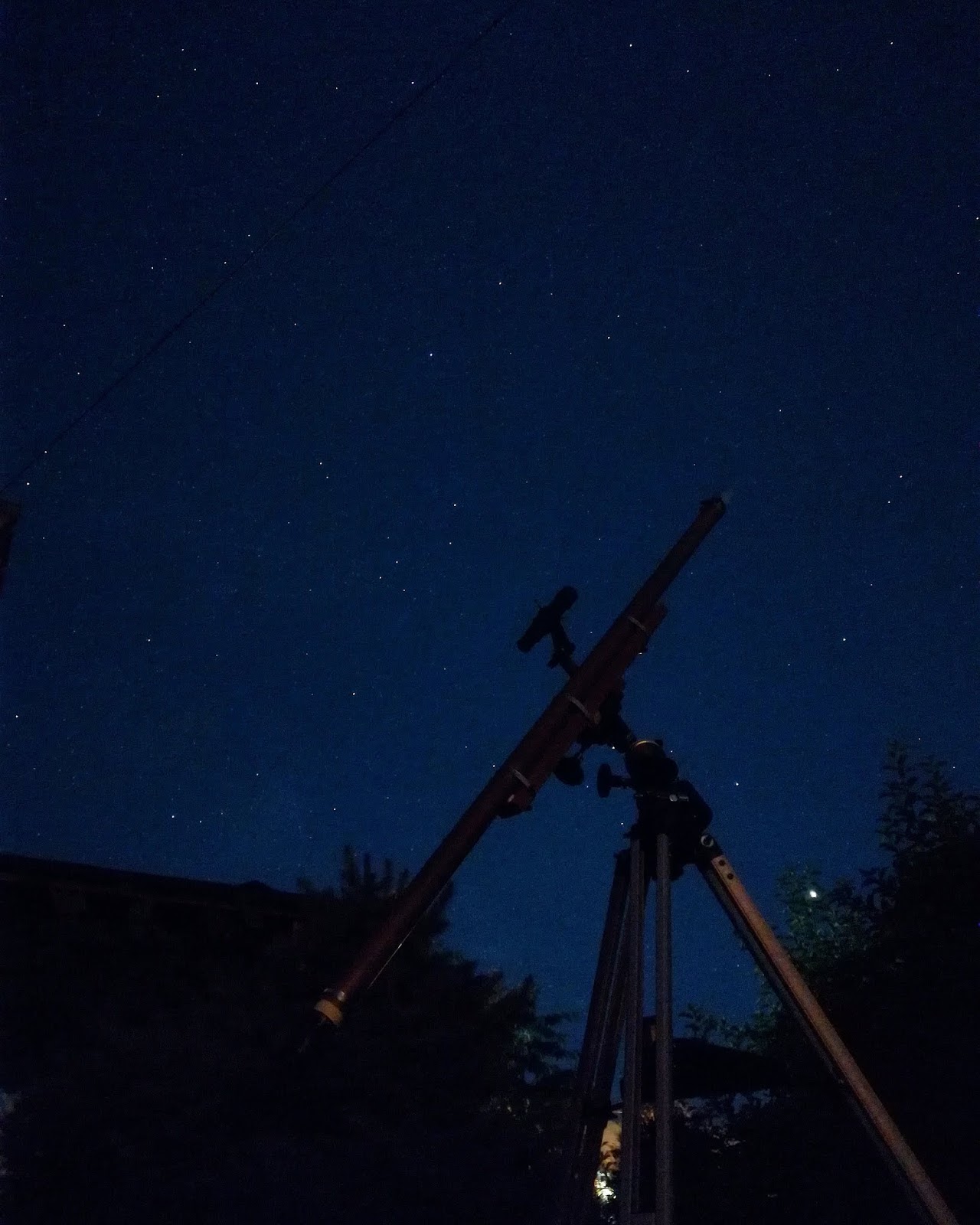 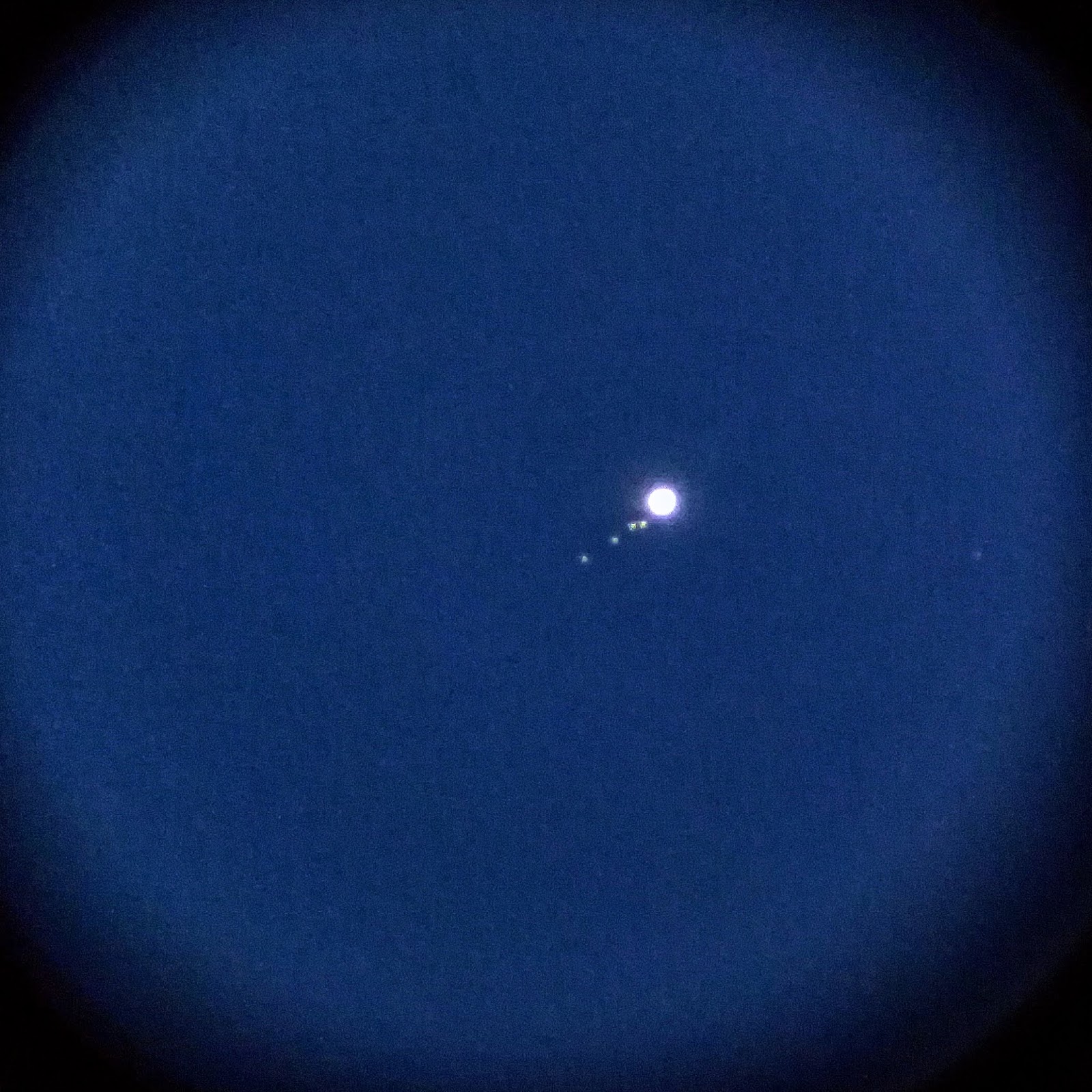 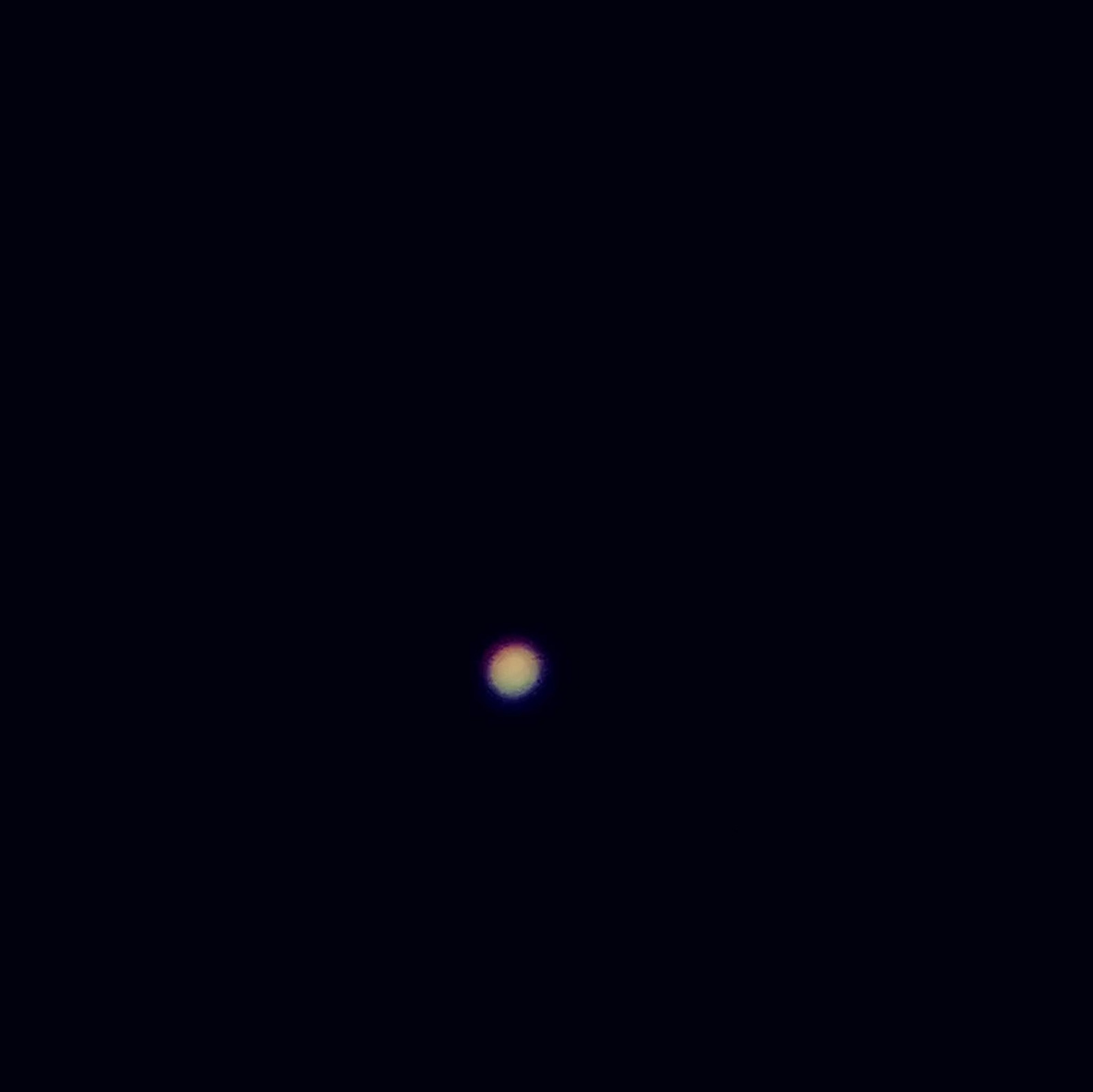 Thanks, Ovidiu. Yes, of course, it is a great joy to take images at the eyepiece with the simplest of tools, but now days, the photo process is a bit more laborious... and I am still not talking about derotating frames in winjupos (which, in my opinion, is over the limit, it is some kind of cheating). Clear sky!

Here is a side by side imaging through my main telescope (a DK D170mm, F/26) and my main singlet lens refractor (a D38mm objective, F/54.2). Both equipped with an ADC prism of 2 degrees, placed at the right distance from the sensor. Also a yellow filter was used on the refractor (which is cut from an old photo filter, I am not sure about its density). The final image through the singlet lens refractor was reduced to an equivalent focal ratio of 40, but it is still large in relation to the objective’s aperture.
The seeing was average. I would like to make more of these, but the weather doesn’t coopetate too often. 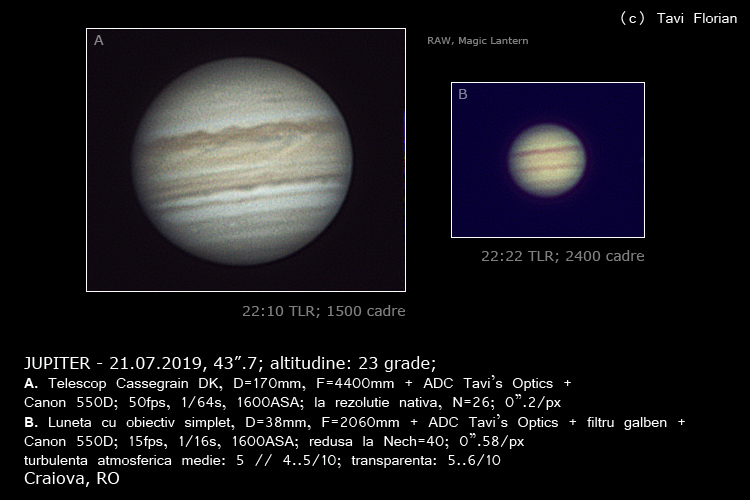 (the rotation is from left to right)

The golden Moon through the golden lens, in the morning day light:

(I call it "the golden lens" because It was made from a golden mirror substrate.)

(the focus was pushed towards red, and I think it is better this way)

Up. A recent image of Saturn through my 38mm aperture singlet lens refractor: 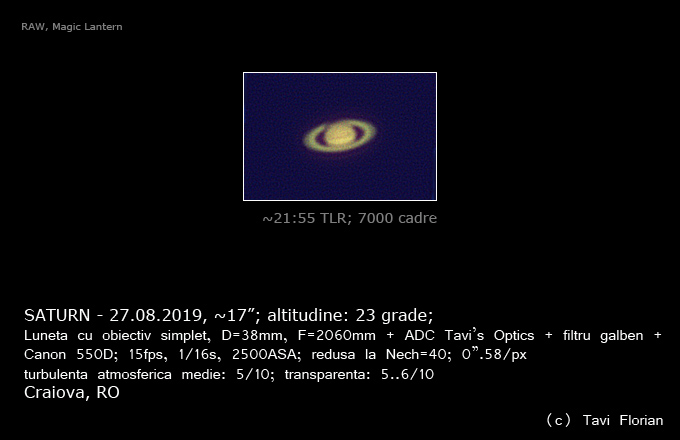 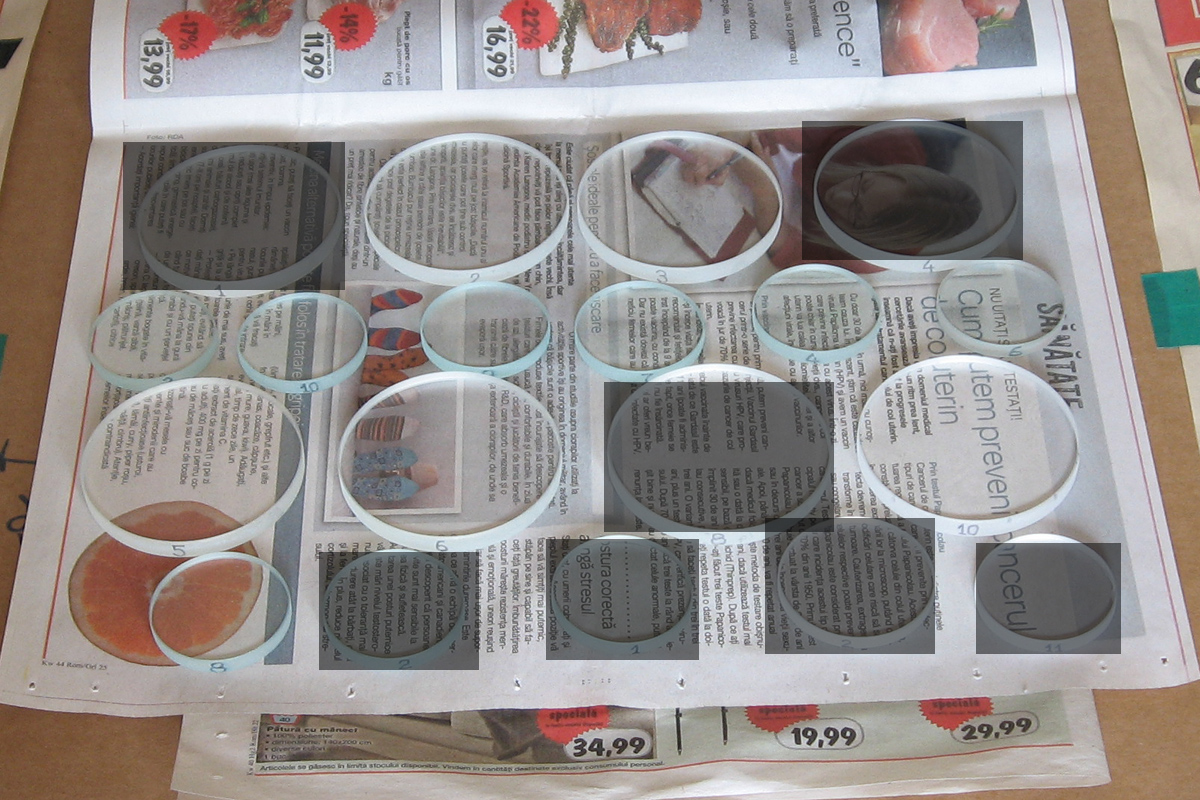 PS: I am still far away from my home in this period, far from my optical components. And in the case of these singlet lenses and the wedge discs, it may take up to 10 or 14 days until I can send a certain order. I have to put together a few purposes for making the trip back home. Thanks for the understaing.

The singlet refractors are the most versatile instruments that have a place in my heart and awaken my nostalgia in the past,this is the 17th century refractor named Hevelius, objective very good  1980mm focal lenght, being of Australian origin 40mm diameter used at 35 and 26mm built last year already has one year of use.
This year I made some improvements, i mounted new diaphragms inside and I better aligned the tubes with some wooden strips mounted laterally that ensures a better alignment, the mount was repainted and remade because it looks like hell, I mounted the clamping rings for the altitude movement for greater precision and better stability of the refractor which helped a lot in the observations, eliminated part of the shocks and vibrations.
The cardboard tubes are thick, (4mm)  being 2 in number, 1m long and the other 90cm, they were varnished and covered in shells for protection, I gave a transparent lacquer so as not to ruin their original color giving a look of the past.

The support plank was lacquered, fitted and replaced with a more straight one, it had 2 m initially shortened at 1.8m, another plank was used later and redesigned for the 26 / 2000mm, the support plank was well painted and designed to be protected and not bend over time.

The system of alignment and support of the pipes makes its effect, the entire assembly is mounted and disassembled at each  observations sessions is much more economical in portability and storage, the cardboard tubes behave very well every time even in the cold being protected now.
The clear images are at 79x eyepiece 25mm Kellner and up to 99x ( 20mm Kellner) I also used a plossl eyepiece of 17mm 116x at Venus, Mercury and at doubles, the moon it is dark too at 116x Jupiter as I tested last year was ok with the 25mm and 20mm is better with the 25mm, but Saturn went good with 20mm, as well as Venus and 116x is ok now that the tubes are better aligned than before and much more stable is much better, sure the alignment does not matter so  much with this big focal points, but I really struggled to be good from the beginning.
Mercury was the surprise at 79x not too much of its shape but at 99x something with airy rings at 116x at the limit i saw it, so I took the camera and with the smarthphone support I shot some footage and then processed them once it came out. 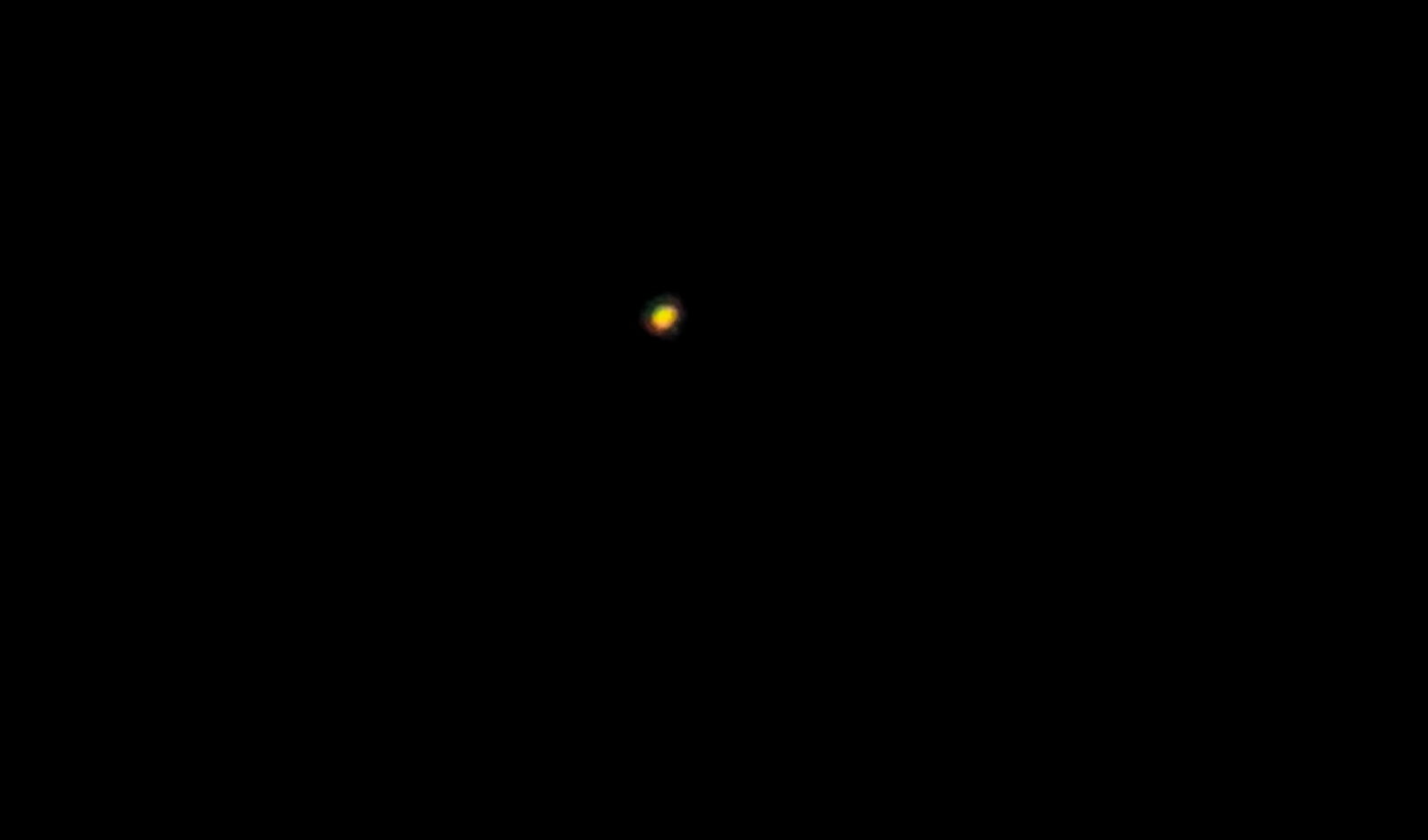 The 26mm refractor is the best instrument that i have for a 17th century aplication. 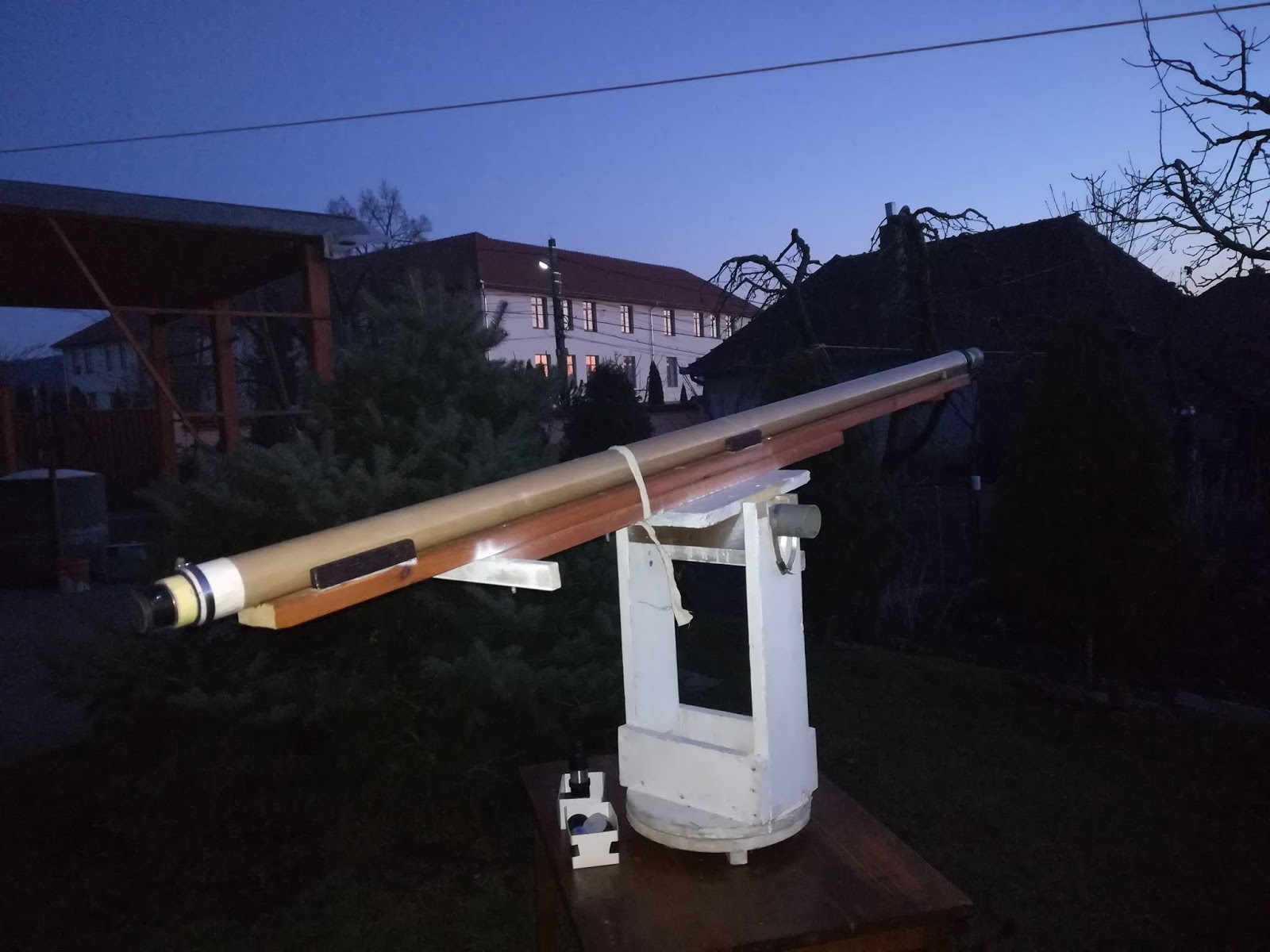 This is my large 4m objective lens for aerial telescope in use, homemade cardboard cell with a meniscus lens, makes new revolutionary observations in astronomy.
First of all i have on my both eyes myopia ( -3.8 and -4 at the right eye) so when it comes to visual observations at prime focus the long focus singlet objective makes a difference, i don't need a eyepiece to make observations, i simply position myself at the prime focus and observe the magnified image produced by the objective lens without any eyepiece, due to the myopia that favors this kind of observation.
Surprise when I find the focal point with the objective lens mounted very high on a table I move back and forth to find the right place, I moved away until I found the focal plane of my eye so that the objective and the eye form an independent optical system and the eye now plays the role of the eyepiece, only people with high myopia can do this.
The moon was seen in sections with many craters, how cool it was, clear as the mirror, I saw the mountain peak and the terraces of Langrenus, the crater Petavius (the central mountain)  WITHOUT EYEPIECES ONLY WITH THE EYE !!!! 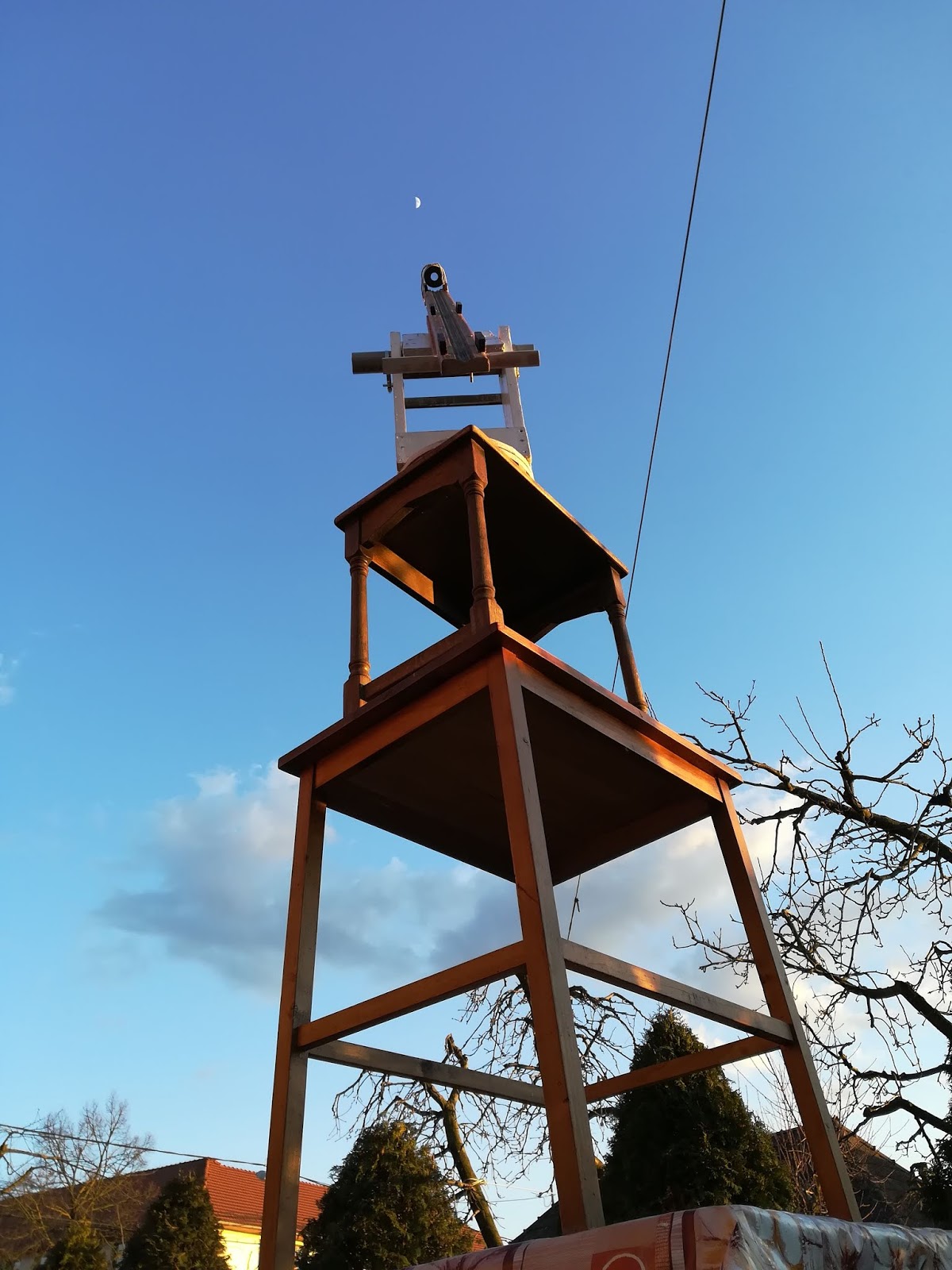 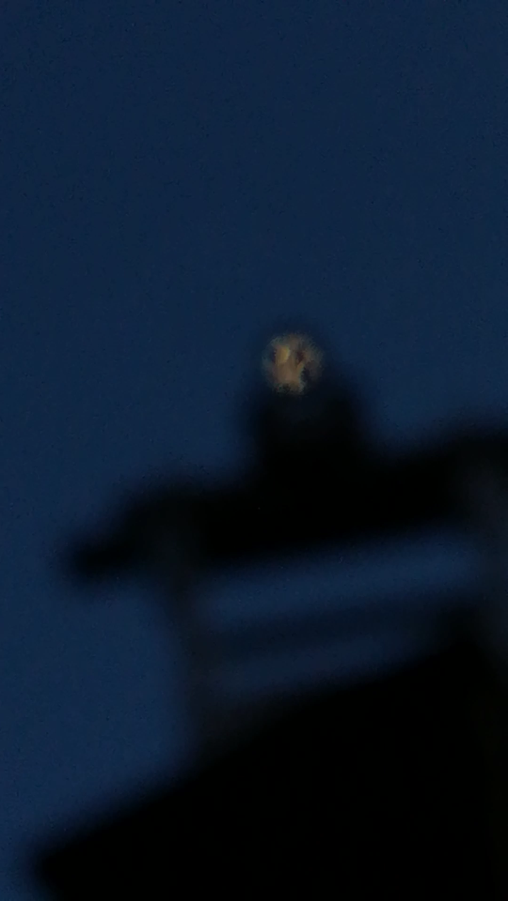 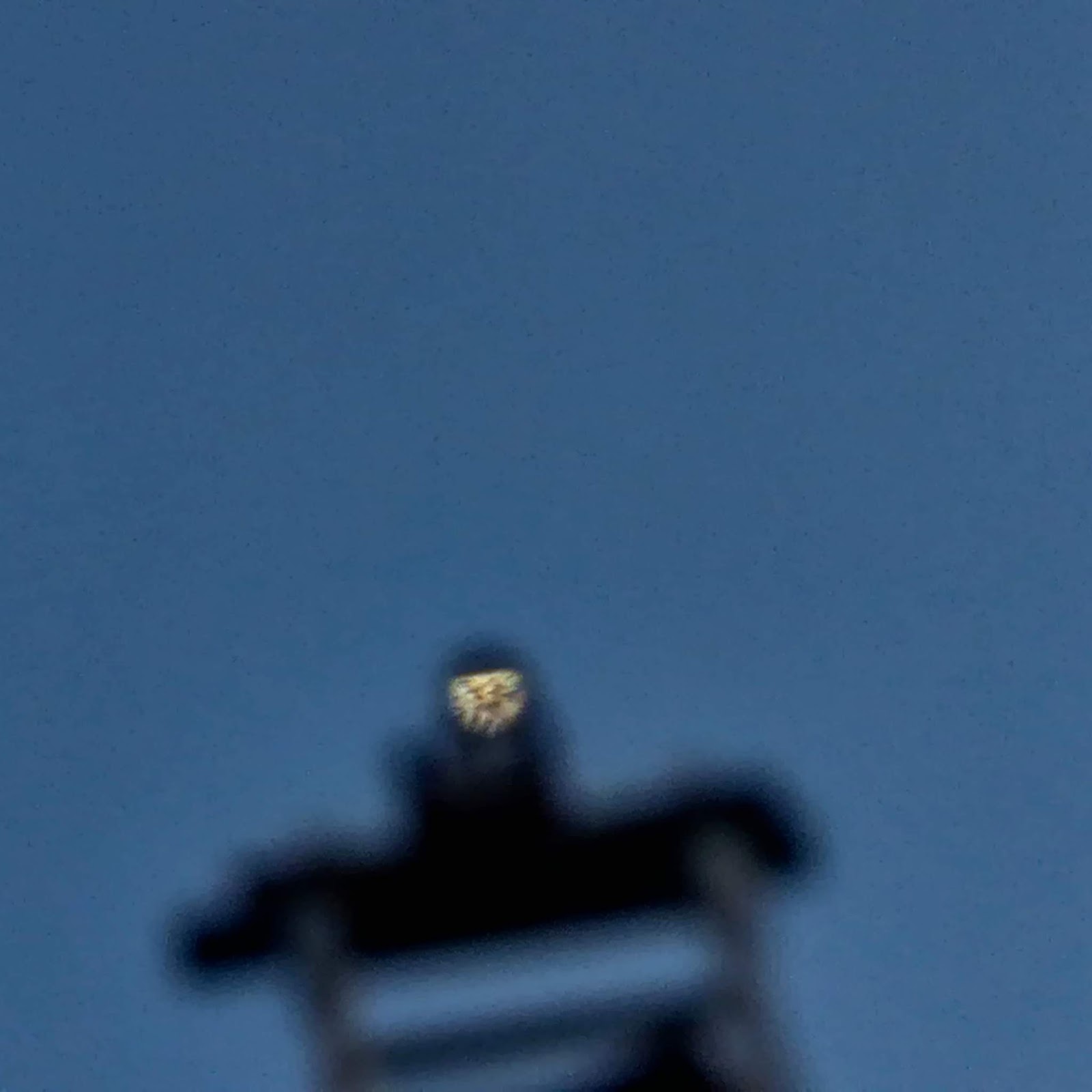 A few days ago, I received a messaje on the e-mail, about this singlet lens subject. It was from someone known for his work in the field of amateur astronomy, done at least with a impressive replica of the Hevelius telescope, equipped with “a cheap lens from the net”. The main point of that messaje was a sugestion to me to seek for minimize the spherical abberation in these objective lenses. And he was pointing at the biconvex-simmetrycal profile that is not the best, rather than a plano-convex profile. Or, to be more precisely, a radius ratio of 1/6 for the usual crown glass (with the stronger curved face towards the object).
Now, I would like to treat again this theoretical statement applied in the world of “long focus singlets”.
First of all, I have studied this aspect (in many practical ways, but also in OSLOedu software) prior to decide on the lens profile, parameters and to start making my series of singlets.
The graphics below are for two types of profile lenses, placed in monochromatic light (with the idea of isolating just this spherical abberation in discussion here). Both lenses have the same aperture of 30mm and the focal plane at 1300mm. First is a biconvex-simmetrycal and the second is a meniscus lens just like the one that I have had and was able to measure its front radius. Both are ideal executed lenses, a condition from which it will turn out the INTRINSIC spherical abberation of the given profile.
As you can see, the amount of spherical abberation inherent to the echiconvex shape is well inside the Airy disc, well below the diffraction limited lens of this kind of long focus. It is lambda/248 PV wawefront, compared with the tipycal strong curved eye-glass meniscus of lambda/2.2 PV wavefront. With this in mind, is there any reason for further quest in reducing the spherical abberation, with some extra fabrication costs?! 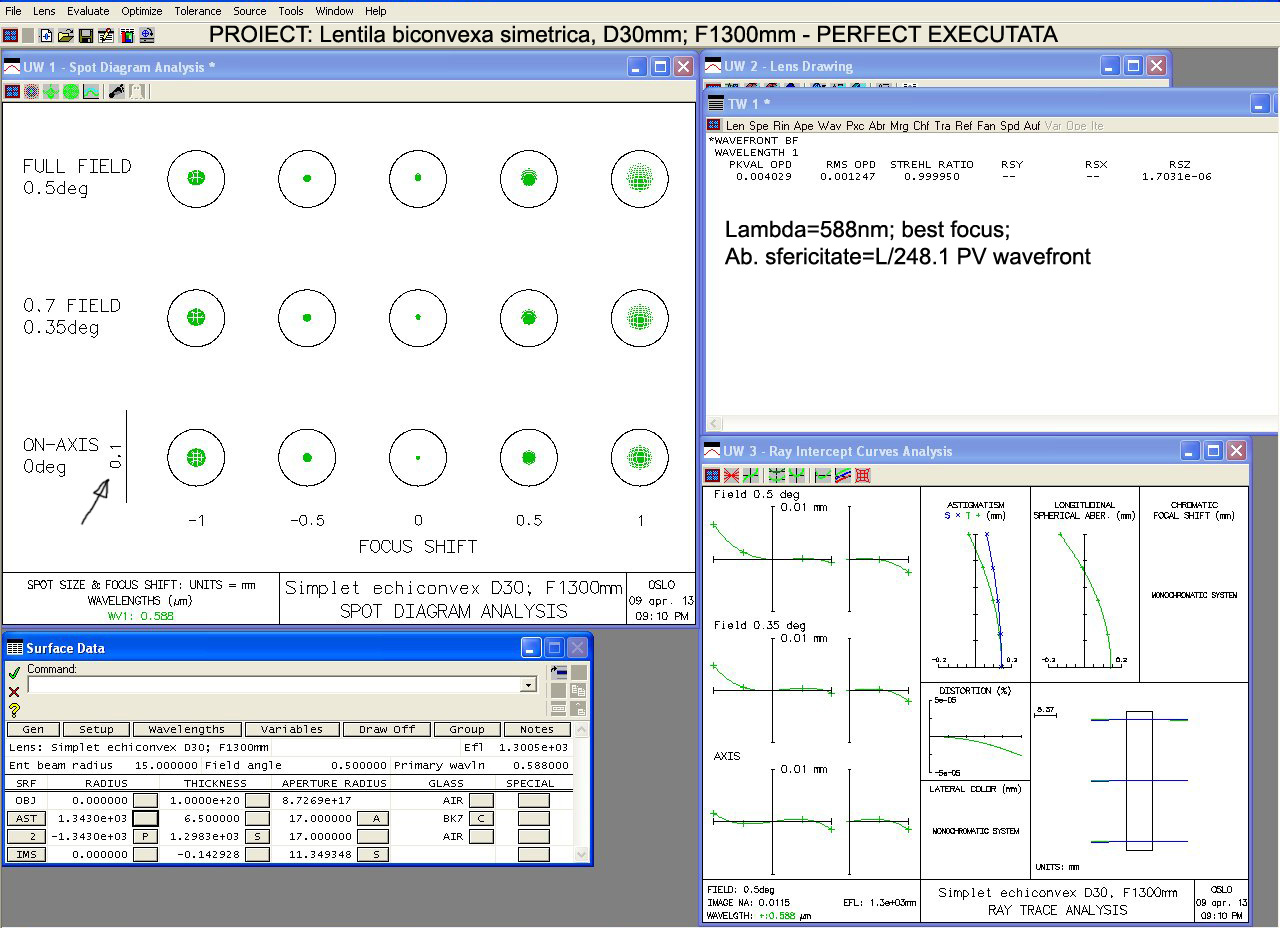 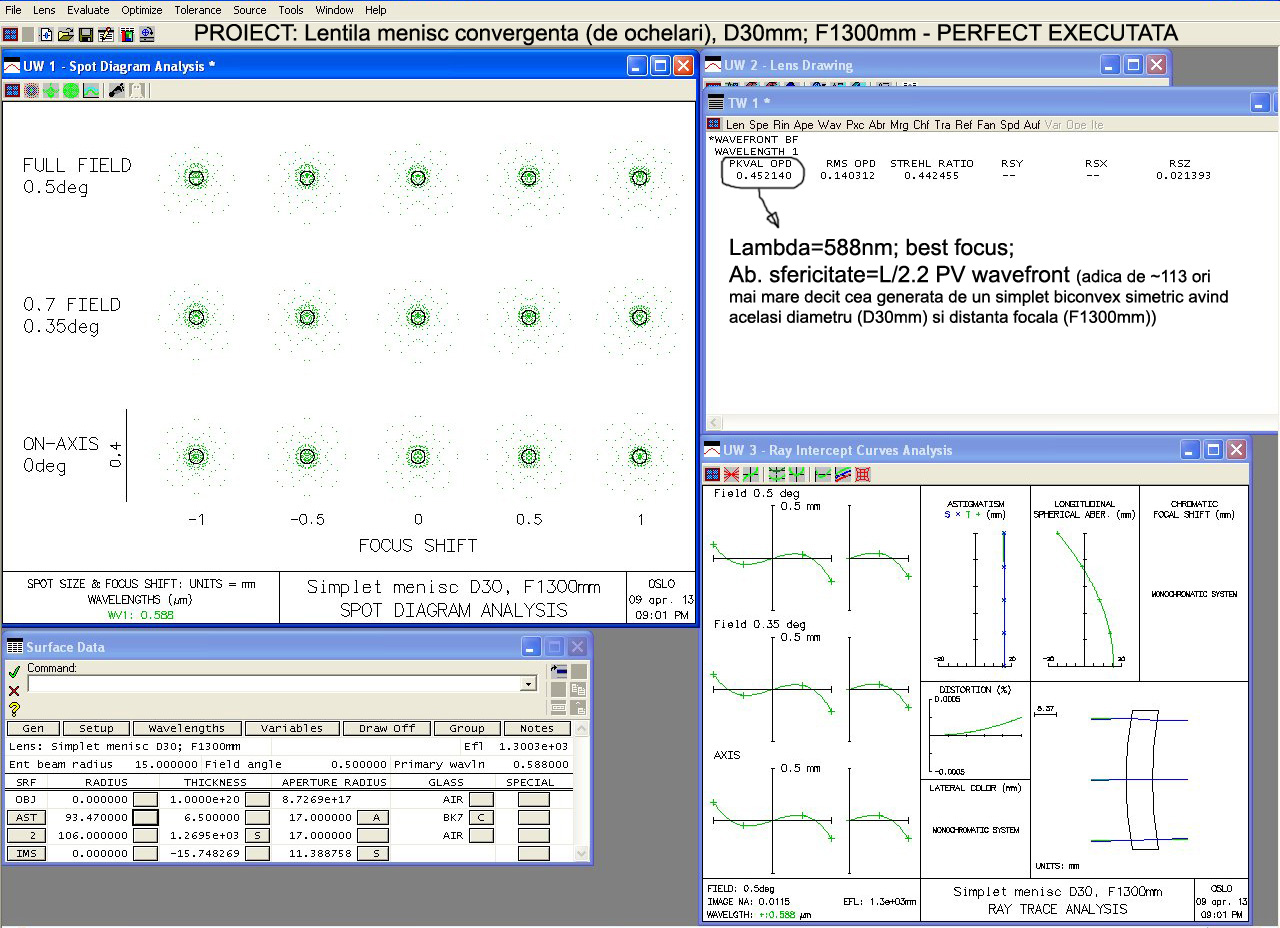 Conclusion: - The ONLY aberration that practically affects the image delivered by the singlet objective lens is the chromatic abberation. Only the strong curved eye glass meniscus might (and usually does) have an unacceptable levels of intrinsec spherical abberation.
- And on my part, I can assure that you will never see blured views due to sphetical abberation in my singlet lenses, at the specified useful aperture.

Of course, everyone has the freedom to use different kinds of lenses, but be carefully not to lose the track of physical reality. Lower image quality in some singlets compaired with others, but all without useless curves (like the concave faces of the meniscus) might come from poor glass and/or defective manufacturing process. Also keep in mind that minimal focal ratio needed for the singlets, that x factor called by me to be at least 1.4 (F/D minimal being x*D[mm]). Be aware of this aspects and also don't get confused by some old scripts... which tells you what people thought back then, when the glass was poor and the outerzone of the lenses was dropping drasticly from the spherical shape and might produced visible spherical abberation. Whatever your choise is, be aware of the aspects involved in it. 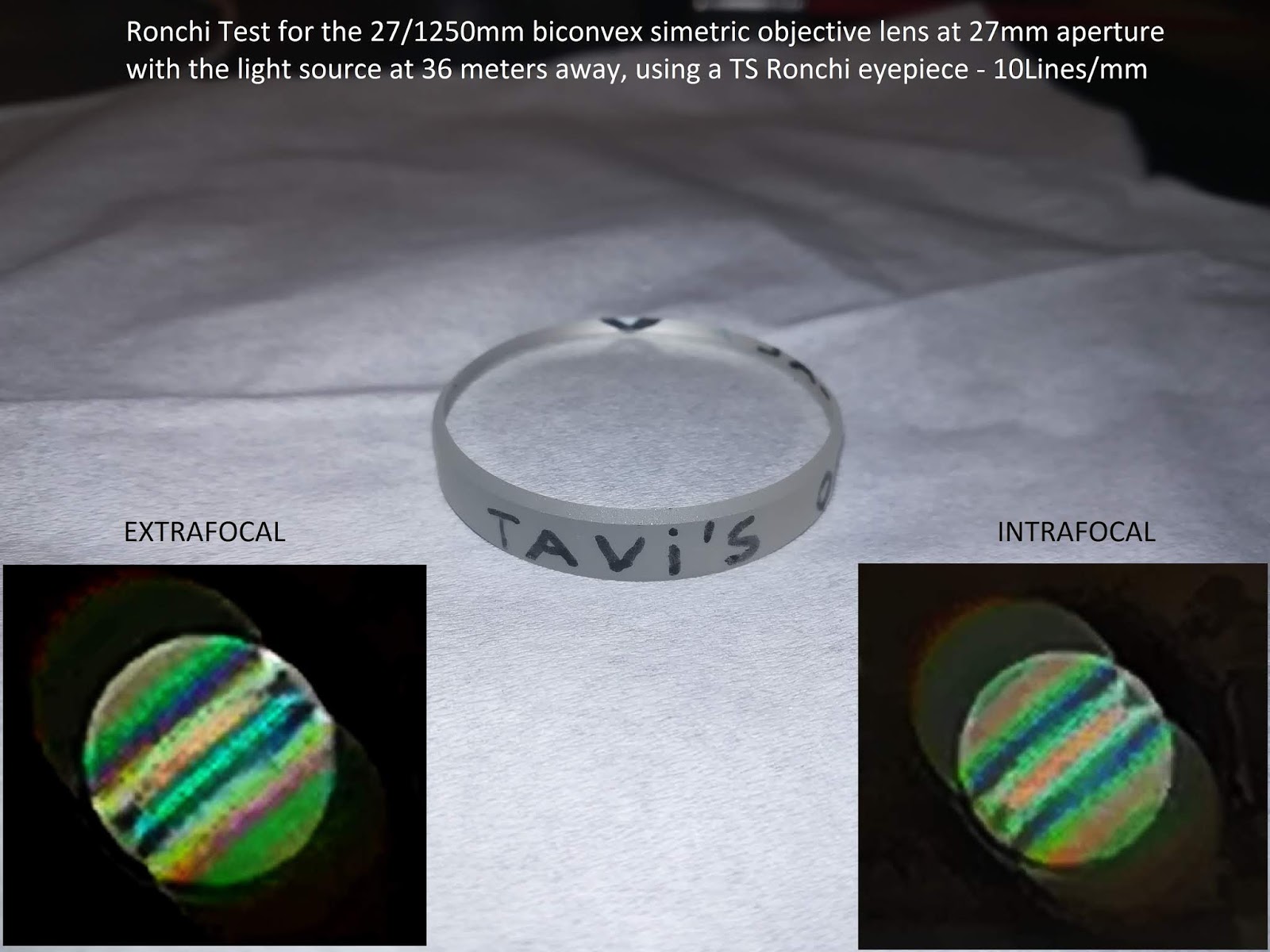 The test was done at 27mm diameter. 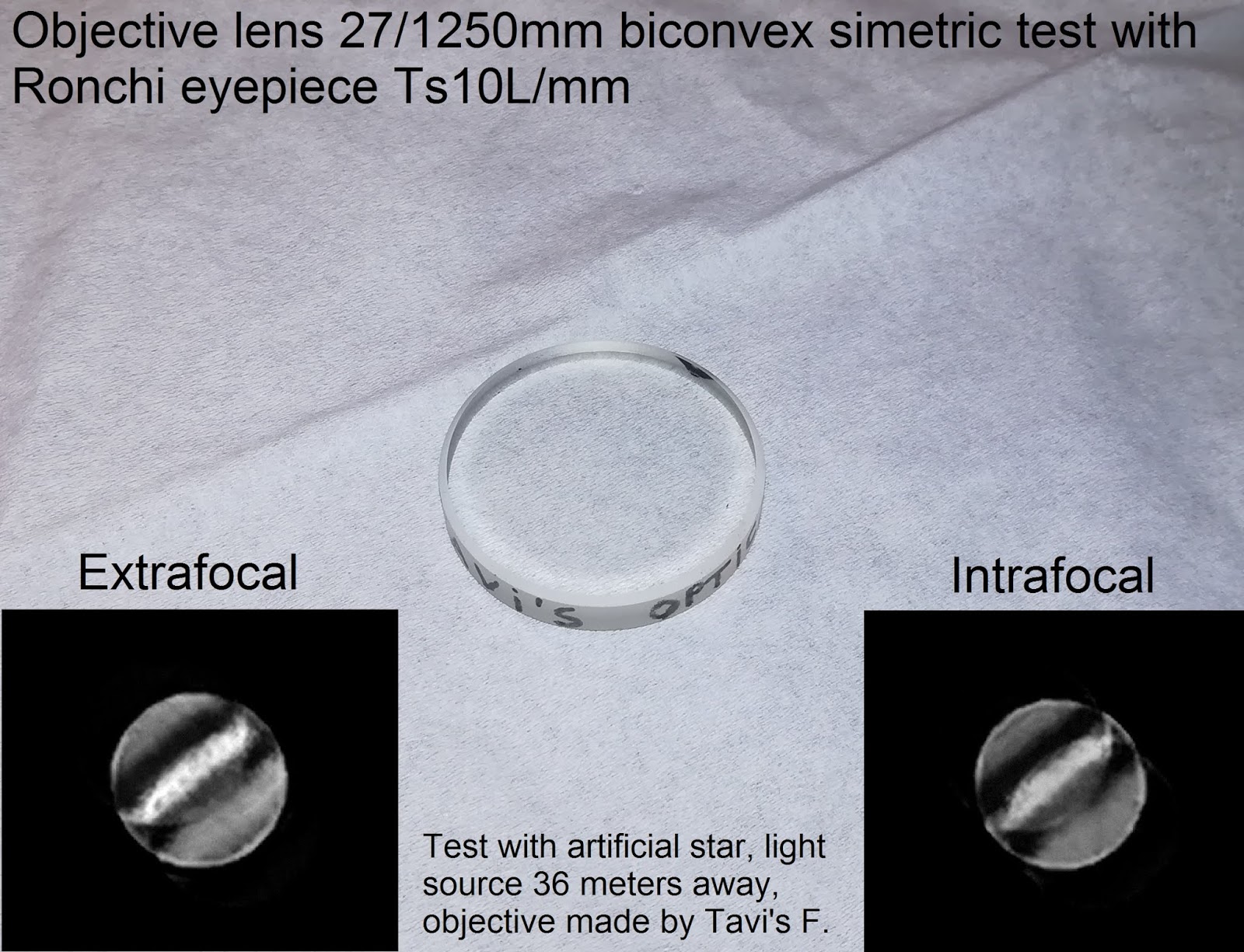