Apologies - not only am I somewhat delinquent in updating the Registry document (notifications of updates are posted here) but the machine which serves them is temporarily down. It may be out a few days, as I am taking the opportunity of the downtime to provision a new one.

My wife saw the controversy of the "B v 8" and instead chose to focus on "TINKY" - wondering if it was a nickname, acronym, anagram, or perhaps a literary reference.

At least 1976 reduces the timeframe of the search. The scope was clearly in existence by that date, and in the hands of some owner. I have been trying to think of what use a C8 could have in a radio station. Calling sporting events immediately comes to mind because I worked as a broadcast engineer in those days and we Broadcast Football and Basketball games as "Live Remotes" with a great deal of promotion and fanfare. Though, TV would seem a better fit than Radio - for a C8. Antenna maintenance and inspection is perhaps a less glamorous purpose, or even "FCC Antenna Proofs" - a process of taking signal strength readings while driving around the countryside in which a C8 could be helpful in verifying line-of-sight to the transmitting tower. (not that I ever did it that way...)

One must take care when interpreting call signs - the FCC re-uses and reassigns them so the KBEW of today may have no real relation to the KBEW of 1976, which goes for K8EW as well. A key question is always "Who had it on a particular date?" Talking to a re-assignee would be of limited value unless they happen to know something of a previous holder's period.

For example - I was dismayed to discover the callsign of my childhood HAM-operator-neighbor had been reassigned after his death before I could obtain it . Many hours were spent looking over his shoulder in his transmitting shack. Bob (W2AI) was into all sorts of things, including SSTV - an elite hobby in 1960s. The experience is probably responsible for my electronics career. Point is - today there is nearly no online memory of his time even though he held that callsign (from the 1940's?) to his death in 1980. It is currently on at least it's second reassignment since Bob.

Perhaps another avenue of inquiry is to research individuals with a recollection of Blue Earth Minn. in 1976-ish and get their recollections of KBEW activities.

It seems doubtful that an ordinary citizen-astronomer would dedicate their instrument to a Radio Station without more than fandom as a motive.

Still, since we have positively identified more than one example of these Axial-Std focus examples, and that leads us to believe there may be as many as 60 or more of them, a more salient question for the registry is the precise serial numbers of the various transition stages. If there is a re-converted (STD to Axial) example it would most likely be in the "Adapted" group prior to 396mm OTA.

Archeology was my alternate career choice after Electronics, as you may surmise. Is Astro-Archeology a thing?

Same thing happens with license plates on old cars.  I've been looking off and on for vintage commercial plates for my 1931 Model A Panel Delivery.  they're pretty rare.  In those days, there were SC and PC commercial plate designations.  SC stood for "Solid Commercial" and PC stood for "Pneumatic Commercial".  The distinction was needed because trucks with solid rubber tires were still on the road at the time (and presumably needed to be charged more, since a heavy truck with solid tires might do more damage to pavement than one with pneumatic tires).  But I digress.  The point is that old license numbers can be reassigned, so simply buying a set of old plates wouldn't guarantee one could register them (many states allow year-of-issue plates to be used on vintage vehicles).  And in the case of the Model A, if it costs me 500 smackers for a set of plates, I'd better be sure that I can register them.

Another relevant sidebar story about the panel truck.  It came with an old magazine photo (probably a restorer's magazine from the 70s, when the truck was restored) that showed 4 panel trucks in front of a bakery in Bellingham, WA (I bought the truck from a seller in Tacoma).  I searched, and found the son of the owner of the bakery after the company shown on the sign, and he did some research for me.  He tried to find the Bakery's name as the buyer at a local ford dealer that had been in existence since the teens, but was unsuccessful.  It occurred to me that the dealer's records might not have the buyer's names, but the VINs.  Then it further occured to me that the 4 trucks in the photo might have been leased instead of purchased.  I've not had the opportunity to search further.  I also tried the WA DMV.  Absolutely no help there, as they won't give out previous owner information (and probably don't keep it for 90 year old vehicles anyway).

Not really, but I was able to enlarge and sharpen it a bit.  I'm pretty sure it's KBEW.

I probably kept the label, and will have to hunt it down. 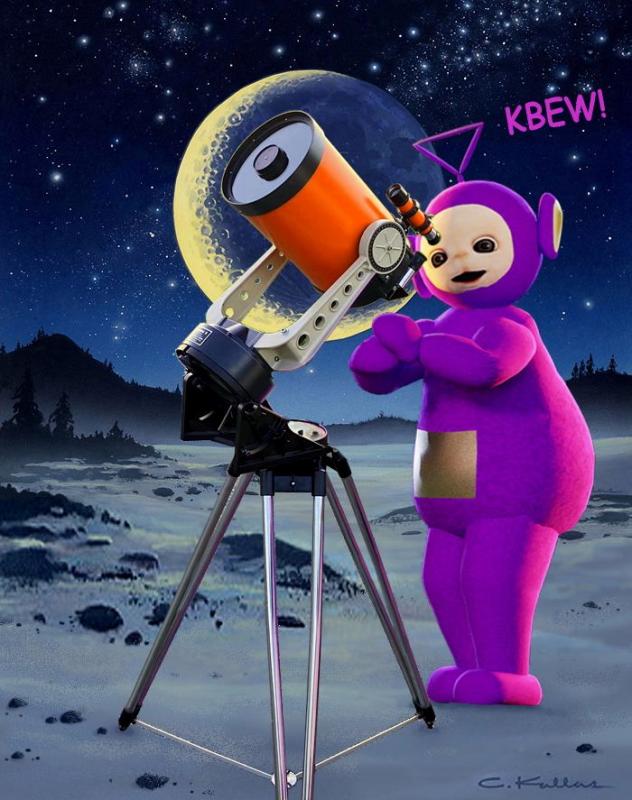 Someone asked about leveling the Celestron locked tripod.  Here is what was used back in the day.  I think these are solid brass and they slip over the existing tripod feet.  They all have helical adjustment.

This citation will not be noted in the registry.

Wooden tripod made in Japan, as are the eye pieces

It's packed with a sky event guide for October 1985 through May 1986, so presumably purchased during or before than range.

Others I saw while researching.