My recently refurbed Celestron Astro C90. Early today I took it completely apart, cleaned off the old grease from the focus threads and altitude axis, and replaced in with a thin coat of Mobile 1 synthetic grease. The focus is now nice'n tight and the mount motions are smooth. This little C90s make great grab'b go scopes! We always take one with us when we travel. 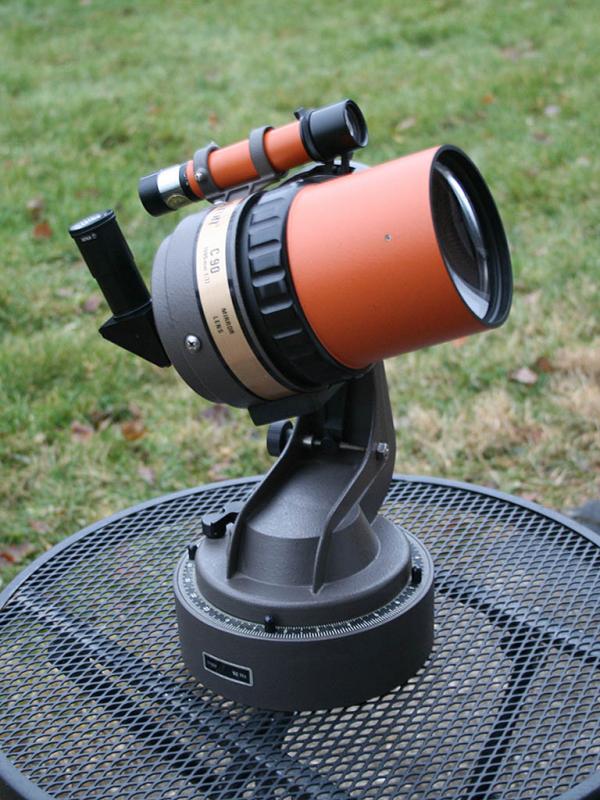 I got one as well recently. Also cleaned out old grease and replaced. Found some silicone bands that fit on the front of the tube which makes for much easier turning of the focuser barrel.

Got an SCT adapter ring which made it possible to use a 1.25" prism diagonal. Pretty good for wide-field views but gets a little dicey at higher mags.

I got one as well recently. Also cleaned out old grease and replaced. Found some silicone bands that fit on the front of the tube which makes for much easier turning of the focuser barrel.

Got an SCT adapter ring which made it possible to use a 1.25" prism diagonal. Pretty good for wide-field views but gets a little dicey at higher mags.

Nice little grab-n-go setup, Mel. You mention the higher powers not being so good. At what magnification do things start to degrade?

I would say my 15 mm Plossl was more than my “floaters” could handle. But that’s just my old eyes.

I used to have one in the late '80 through the mid-'90s and IIRC I could easily do around 120x with .965 eps. Nice little scopes. It saw a lot of use as a spotter and telephoto lens as well as a scope. Used it to photograph an eclipse with a homemade aluminized Mylar solar filter, one of which the local paper printed on the front page. It got a lot lunar light through it, as well. Surprisingly, one of my favorite objects was the Orion nebula. I have one of the new ones but it's not the same.

The pic is my sister using it with the original porro prism. I never adapted it to 1.25. 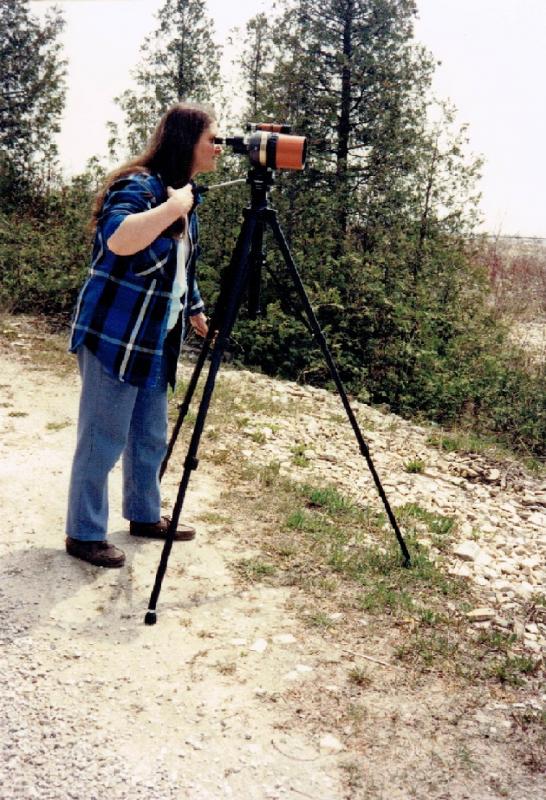 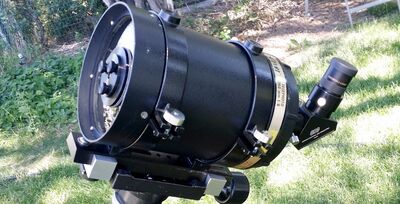 Got my TEC MAK6 out last night to look at Jupiter.  Seeing was poor, but for split seconds it would stabilize.  Lots of bands and the Red Spot was just coming around.  I was surprised how it has become darker and brighter since the days of the Pink Spot.  The mount is grab and go, but the MAK6 is at its limit.  Best eyepiece for the conditions was a 14mm Morpheus.

Here is a pic of my newly acquired ETX90, with a WO blue dovetail bar, Astrozap Dew Shield, Rigel Quik Finder, 1.25" Visual back and adapter, and eyepiece. The colorful print on the tube is a Telewrap that is no longer manufactured and is nearly impossible to find.

LOL, I have the same TV trays 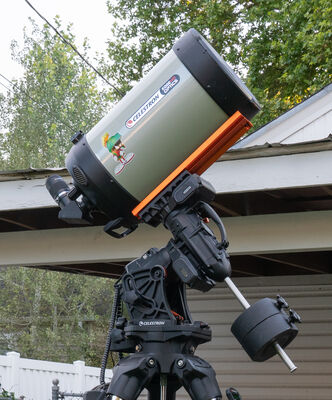 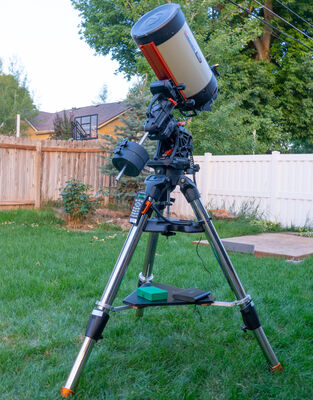 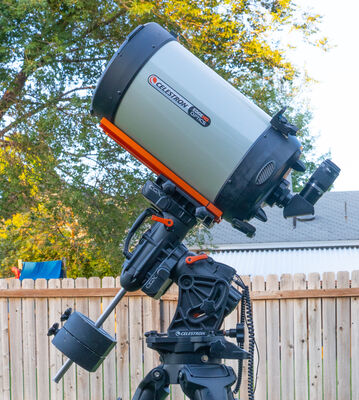 Tonight I am looking for planets to photograph.

Here's my C5 at the George Observatory south of Houston. Was doing a little public outreach for the Houston Astronomical Society. It's paired with a Panoptic 24mm as well as the iOptron Cube Pro mount. 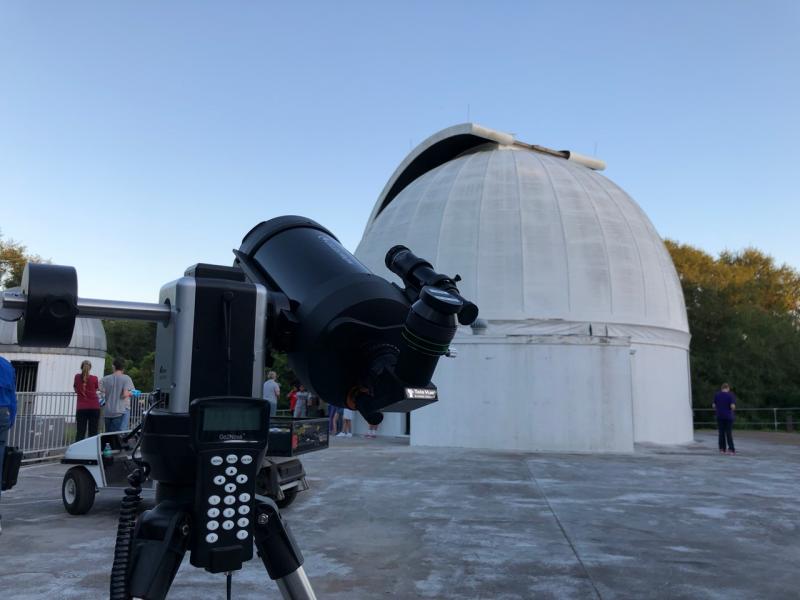 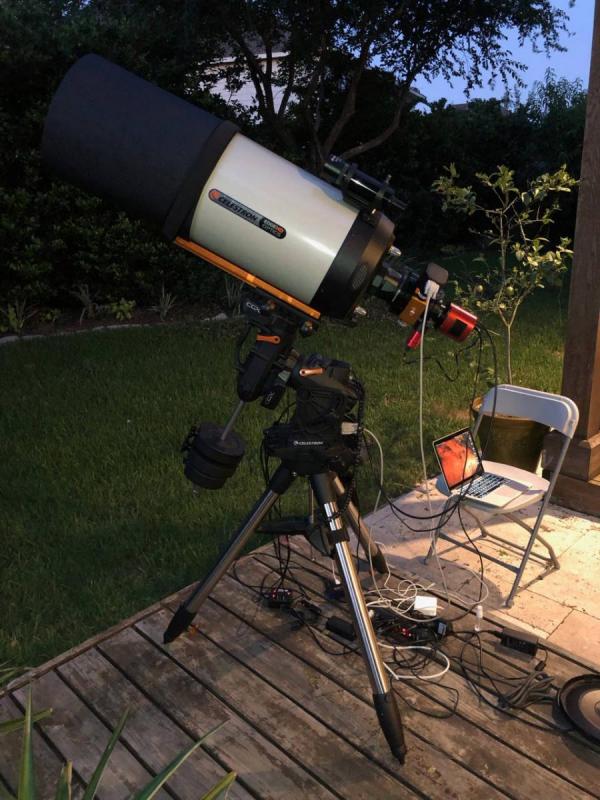 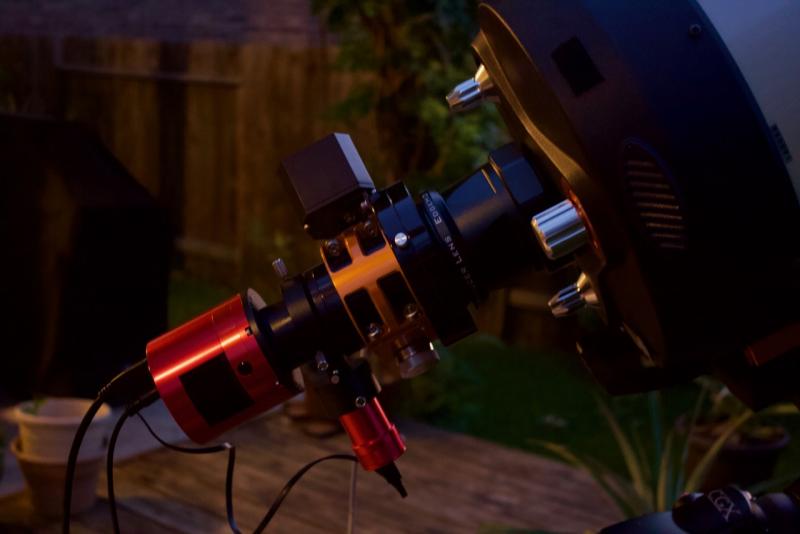 Where did you find the Warner Brothers Martian decal. Very cool.

Where did you find the Warner Brothers Martian decal. Very cool.

I just found it online and ordered it. I put Marvin there to cover up a scratch in the paint. Now that it has been there for a while I wouldn't take it off even if there wasn't a scratch.

New to me TEC 6 MCT for a solar quick view. 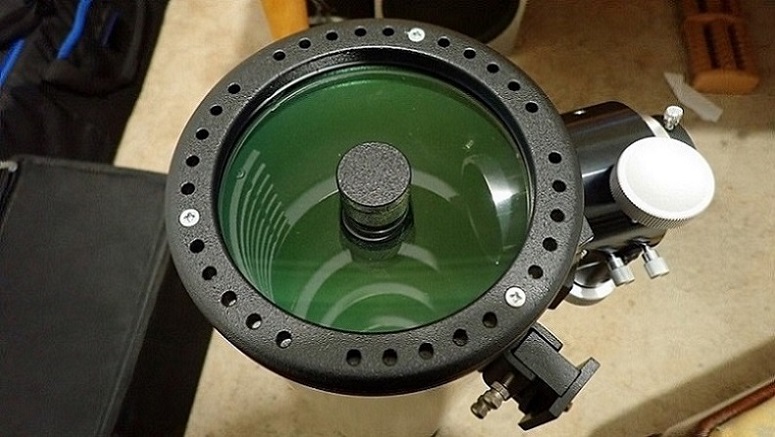 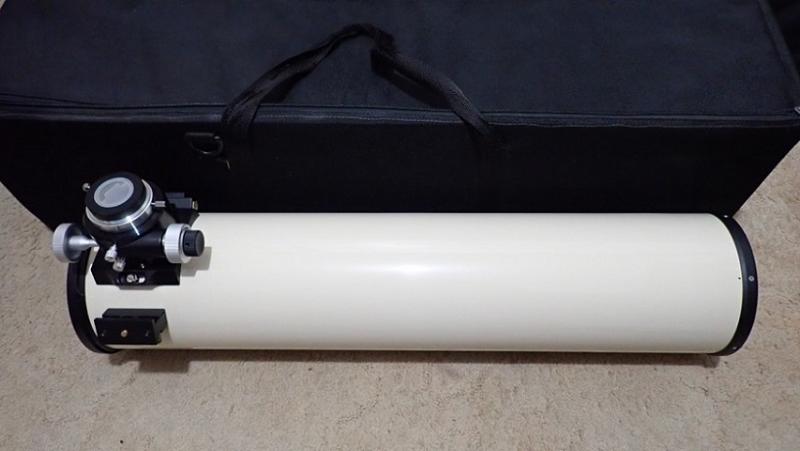 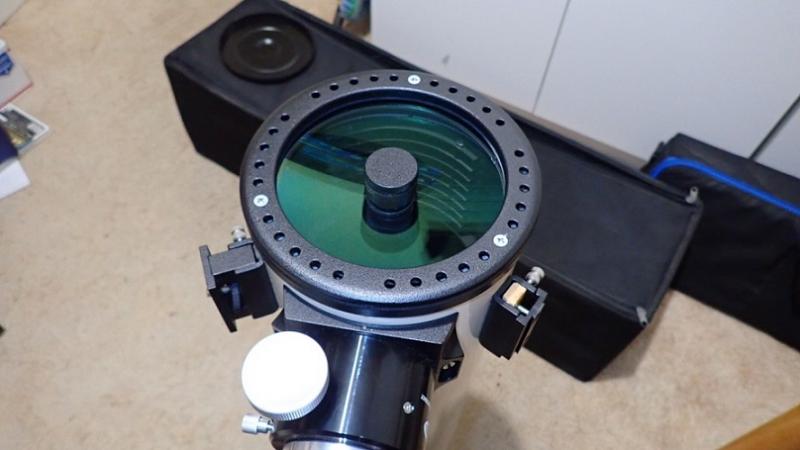 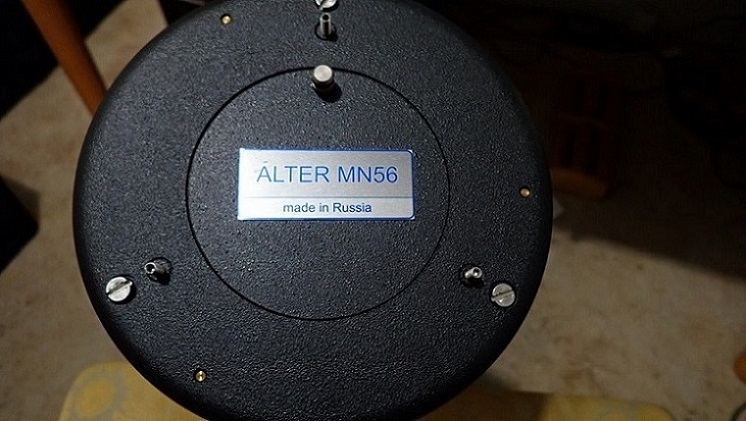 How do you like that IM615? I was contemplating buying that new from TS as they still have them in stock. 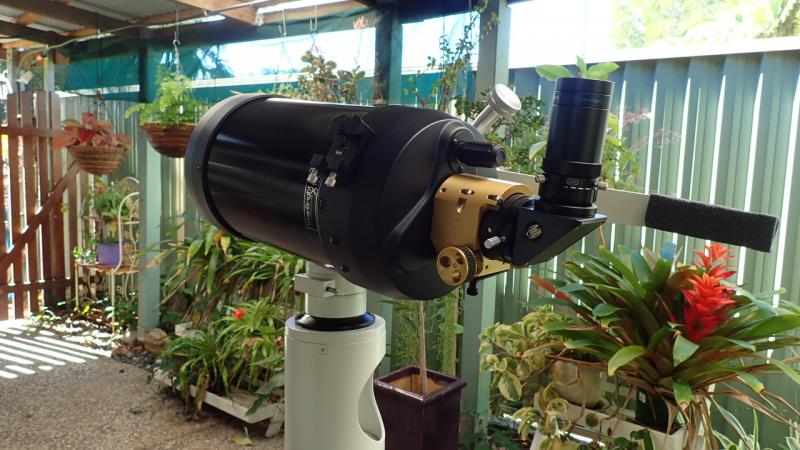 How do you like that IM615? I was contemplating buying that new from TS as they still have them in stock.

It's quite good compromise for a quick look at moon and planets, bright clusters etc and small enough to take on a weekend away with the family. A Skywatcher /Orion 150mm Maksutov is cheaper and lighter, probably much the same optically so don't think you really have to buy an Intes one from TS.

I acquired mine secondhand and despite its age the optics are pristine and the OTA is cosmetically perfect apart from the usual wear & tear on the  dovetail bar.

There are a few issues to be aware of with these scopes:

1. The Intes brackets for finderscopes are unique and compatible brackets are simply impossible to source afterwards. If you do by an Intes mak make very sure a matching finder bracket is included, and ideally an Intes finderscope (or a modern equivalent).

2. Intes supplied a variety of finders and I have seen at least 3-4 variations in the finder brackets.

FWIW the 10x50 finders on the M615 and MK91 are both excellent - optically the objectives are good quality coated doublets, fitted with an illuminated engraved glass graticle with across-hair with a clear centre, and the eyepiece is not a stupid one.

However... mechanically these finders - and the matching brackets - are not interchangeable. They are also impossible to find elsewhere, short of making one yourself - though with 3D printing technology or a friend with a CNC machineshop, it's possible to make a nice DIY solution.

3. The Intes OTA has a standard SCT thread on the back (like a C8). To this you need a screw-on adapter for 2" accessories, confirm whether this is included or you buy it separately.

5. Intes offered two grades of optics - the standard versions were 1/6 wave P-V or better, while the deluxe ones were 1/8 wave or better and a copy of the test result should be provided with the scope. Clarify with the vendor which one is being offered; the deluxe ones do command a higher price.

6. If buying secondhand be very careful concerning the possibility that someone has futzed with it in various ways - such as flocking gone wrong, damaged the focussing mechanism or removing the corrector to mess with the internals of the OTA. While modifications can be done well, they can also be done badly and I have seen examples of that. Also there are scopes that are in a bad way cosmetically, badly handled or dropped, damaging the optics.

7. If someone has taken the corrector off and replaced it, there is the possibility the retaining clips have been over-tightened or the 3 paper shims that separate the glass from the metal cell were lost. In these cases the corrector may be strained, and star images will be noticeably impaired.

The retaining clips should only be finger-tight and the usual method to keep them in place was to apply a dab of optical wax to prevent the screws from loosening, yet easily undone. A dab of nail polish is a good alternative.

If a paper shim is missing it is easily replaced, the material is basically that used for business cards.

8. From about 6 examples I've seen over the years, Intes really did get the moving mirror focussing right - it does not have any kind of mirror slop, though they vary between very free to slightly stiff which may be related to age and how much use they have had. Nevertheless far better than any SCT and I see no reason to put a Crayford on the back of these scopes.

Tonight I am looking for planets to photograph.

Where did you get the tripod tray?

Side saddle in rings from Parallax. Thanks Joe. 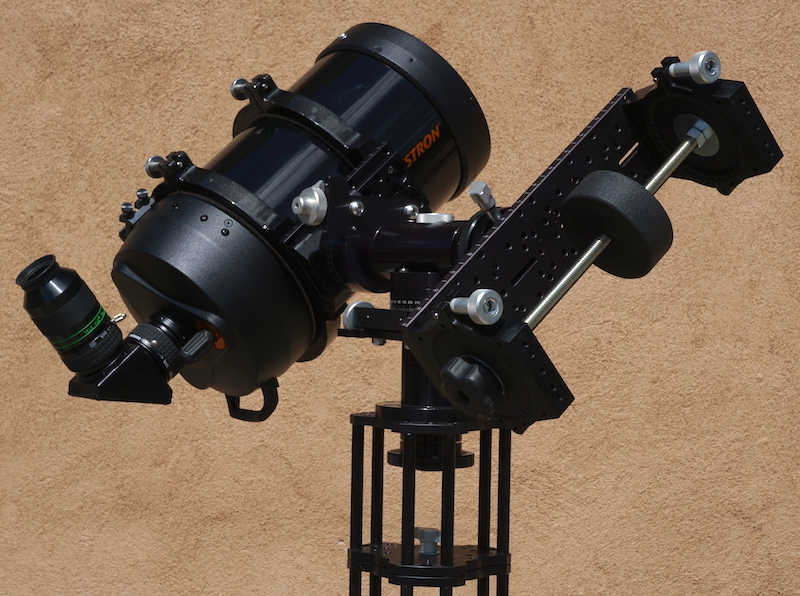 I thought I had posted mine on this thread, but I guess it was a different one.. so here goes! 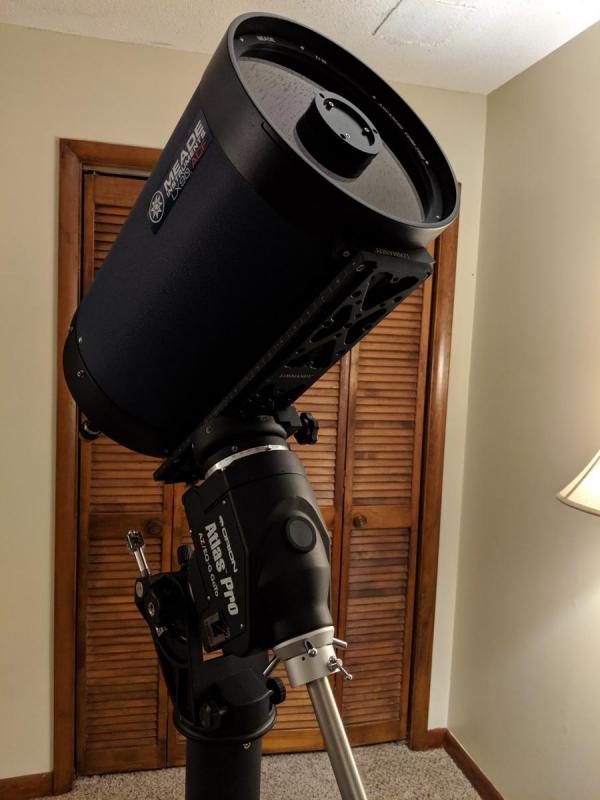 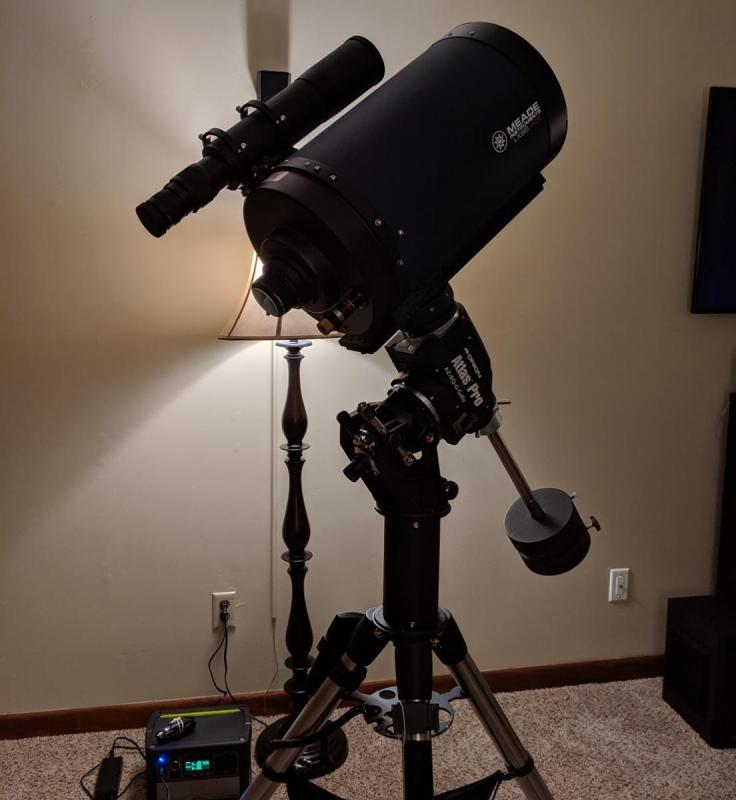 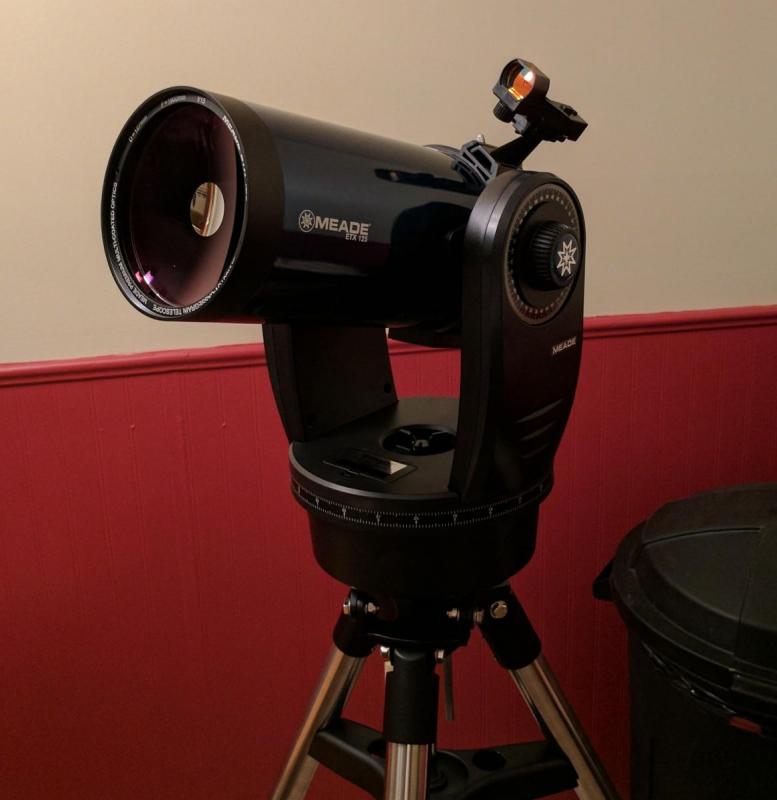