One more... Mounted on my trusty GP2.

One more... Mounted on my trusty GP2.

They would look better with the glossy blue paint finish.

Ehh, I kinda liked the flat blue after a while. It makes it easier to distinguish my old Meades from my new Meades.

I just received my new Takahashi Mewlon 180-c this morning. This is my first Tak. I mainly bought it for planetary viewing and imaging, so keeping my fingers crossed! I'm surprised that it balances with just an 8 pound counterweight, although the weight must be extended to the very end. Hopefully I can find some snazzy counterweights so I can move them farther up the bar.

And one more for the heck of it.

My new Edge 800 HD.  I've only had it out a few times.  The optics are very impressive and the entire package is quite portable.

The C-8 (along with the 102 mm F5 refractor) will be used mostly with my image intensifier (which you can see in the C-8’s diagonal) for deep sky viewing.

First light was the other night. The moon was out so I set up the C-8 for some lunar views before any stars were visible. I could tell that one area in the field of view (around the 5 o’clock position) was sharper than other areas so I knew the scope needed a collimation touch-up. But the sharp view of the crater Gassendi: (in that 5 o’ clock area) at 180x gave me confidence that the scope was good optically.

When the stars came out, I was right and the scope needed a collimation touch up. After 10 minutes collimation was perfect.

Optically the scope is nice; 6 stars were seen in the Trapezium and the views of a high, 10-day-old moon showed wonderful detail at 180 to 222x. A scope like his would keep a lot of people happy.

The start test inside and outside of focus showed: nice concentric, evenly illuminated circles, no obvious zones or mirror tilt or astigmatism. However the shadow breakout was obviously different inside and outside focus, which is a tell-tail sign of SA. My best guess in ¼ wave of SA and is pretty typical for these SCTs and you can also see that in the slightly fuzzier in-focus star images compared to some other scopes. But with no other obvious aberrations, that’s not bad for the price paid and is actually pretty good.

Next up is my test with the intensifier but there should be no problems using the NVD Micro with this scope.

Here's the Omni XLT 127 on the AZM Pro. Going to have to come up with a solution to balance the alt axis, it's way back heavy with the bino.

Yesterday the sky cleared at sunset, turning on a perfect calm autumn night so I just couldn't resist a quick date with a big european blonde... seeing was awesome. I should have put the rest of the insulation on, but left it at home

The scope had been stored in a warm location during the day and I had no issue with dew on the corrector, despite there being a lot of dew on things on the ground.

Note the location of the finderscope - I find that vastly superior to having it near the eyepiece of the main scope.

The Synta made LX70 from Meade. Very nice.

That's about when I bought mine.

My new C-8 with finders and dew sheild and my Mewlon 210.

My new C-8 with finders and dew sheild and my Mewlon 210.

What kind of dew shield is that?

What kind of dew shield is that?

AstroZap flexible with notches for a Vixen-type dovetail and with a felt-like lining. Very nice. 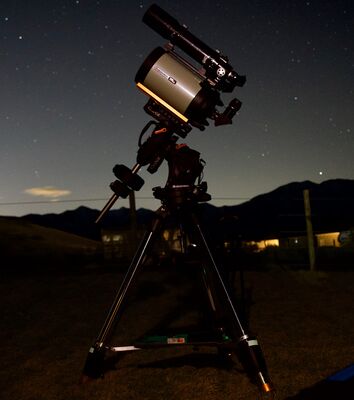 I had my C8 out Sunday night for some eyepiece time and imaging.

WIP alt-az mount, for my 9.25" SCT. Just got the Baader diagonal, and yard test shows good performance for the non-EDGE model.
Axes are with loaded bearings, and teflon clutches. Very smooth, and no slop. Together enough to see how it's going to act.

Three of them in this pic. One is hiding. 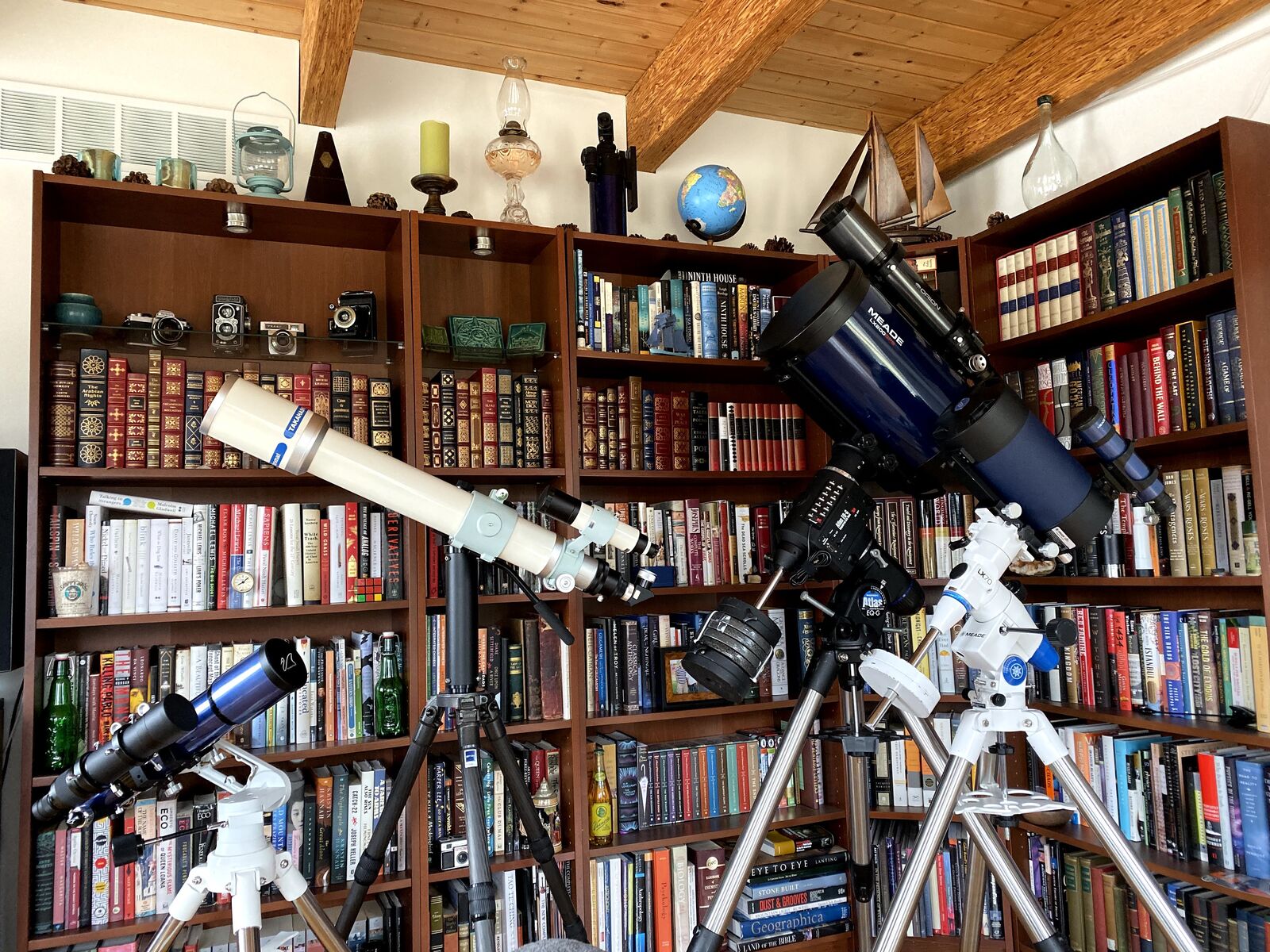 Three of them in this pic. One is hiding.

LOL... upended on the top shelf between the oil lamp and the globe ? A little 90mm ETX or maybe the Meade 4” SCT spotter ?

LOL... upended on the top shelf between the oil lamp and the globe ? A little 90mm ETX or maybe the Meade 4” SCT spotter ?

I have the exact same model and love it!