Since good health, free time, and good skies can't
be purchased, you might as well purchase what
you can ... scopes!
Precision optics ... Must ... Buy.

Already had a TEC 140, 2nd run. Arguably the best scope I ever owned but eventually the weight got to me at my age.  Sold it and used less than 40% of the money to buy a rare Borg 150, which weighed about 1/2. Once I added the F4 Super reducer it was actually a better imaging platform than the TEC 140 because the flat field was much wider. Still have that and the SV115T anodized blue (one of four known). Thinking about letting the Borg and my AT80ED go to pick up an SV80L.

I originally bought a DM4 to support my SV115T20 (the newer version). I became a big/heavy 2 inch eyepiece junky and I bought a used DM6 because it was more immune to weight changes. I then upgraded the tripod to a Planet with a Losmandy top with a EX12 pier extension. Later a TEC 140 on Astromart called out to me. I wouldn't have purchased the TEC 140 if I didn't have the perfect alt/az mount with capacity. So I wouldn't say the DM6 is too much mount for the SV115 refractor. It is an extremely stable platform with almost no damping time. The only downside to the DM6/EX12/Planet setup is it is a little heavy. I use an FTX on a Gitzo 5541LS when I want a more modest weight setup.

Time to resurrect this old thread, as a fellow CN’er has tempted me with another SV115 TMB/LZOS.  And yes, I know I don’t really need one at this point, but I think it would be fun to try one out again.  What to do???

Oh, just buy it! Have some fun with it and if you decide you want to pass it on, you get your money back - these are as rare as hens' teeth these days, plus the SV blue powdered OTA look is, well, gorgeous!

I did indeed buy it a few hours ago, and the seller should be able to ship it on Tuesday.

It's a beautiful scope with the blue adonizing. Awesome size/aperture.

The seller sent me a pic that he snapped with his cell phone last night.  I'd post it, but for the TOS (don't post images that aren't your own).  Yes, even us admins have to follow it.

Oh, just buy it! Have some fun with it and if you decide you want to pass it on, you get your money back - these are as rare as hens' teeth these days, plus the SV blue powdered OTA look is, well, gorgeous!

Interestingly it’s not the usual powder coated Stardust Blue (which I’ve always been very fond of), but the more rare anodized blue, of which I believe only 4 or 5 were produced.  I can’t wait to see it in person.

Interestingly it’s not the usual powder coated Stardust Blue (which I’ve always been very fond of), but the more rare anodized blue, of which I believe only 4 or 5 were produced.  I can’t wait to see it in person.

If I bought a FS-128 because I “needed” something to fit in between a 115 and a 140, my wife would probably have me committed.  Or maybe not, because then I wouldn’t have the income to pay for these toys that I’ve purchased.

Here it is, cooling down outside during dinner. 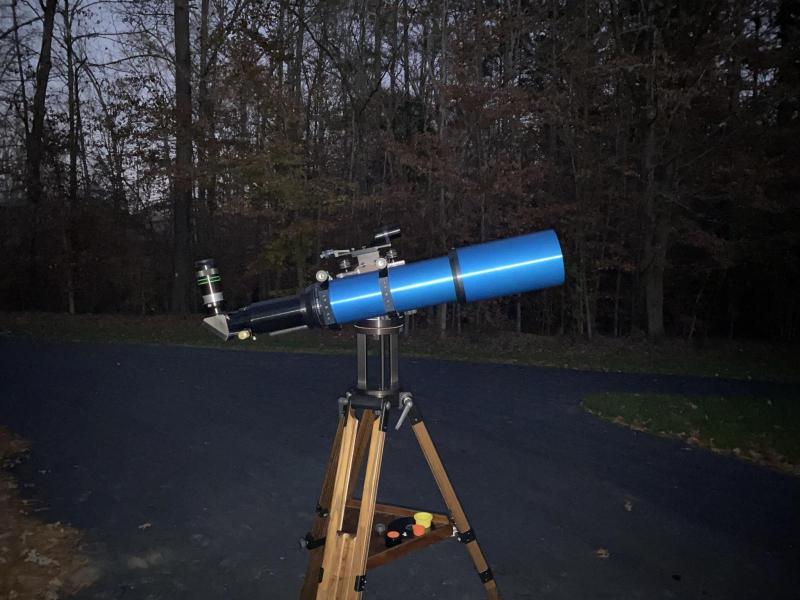 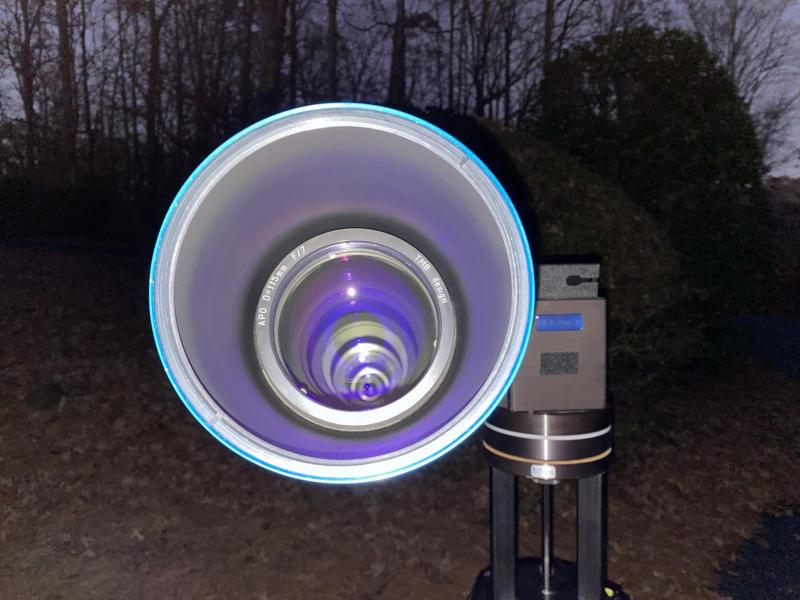 Sorry for the crummy cellphone pictures, but that was the only camera that I had handy while setting up my gear. 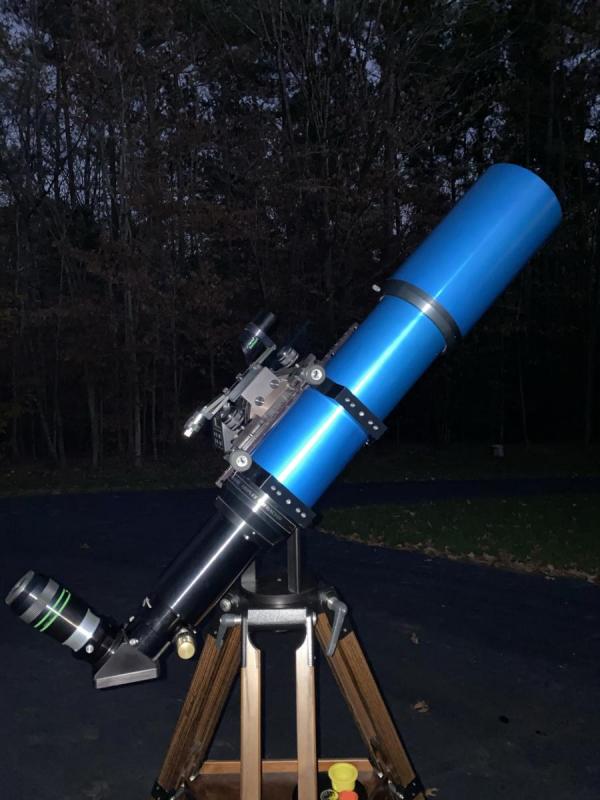 I got first light with the SV115 last night, and was very pleased!  Not surprising, of course.  I let the scope cool outdoors for an hour while eating dinner, and when I got outside was treated to the best views of Mars that I’ve ever seen.  The surface markings on Mars appeared even more distinct than when I viewed it with the TEC 140 last week, but I didn’t “pre-cool” the TEC before using it, and started observing right away.  I think the skies were a lot steadier last night, too.  But regardless, the optics appear to be a winner, and the scope a keeper!

It looks like your smaller 80 lomo but on steroids. Not surprised you love it haha.

Mars had some average seeing last night for me  but there was transparency issues. Nonetheless Mars wasn't too shabby last night.

Yeah, I like that they match.  It may sound silly, as the optics are the most important part, followed by the focuser and other mechanics, but the aesthetics of a scope really contribute to my enjoyment of the scope (especially if it’s a high end refractor).

Here’s a picture of my SV80S LOMO (another fine refractor with Russian optics) for comparison: 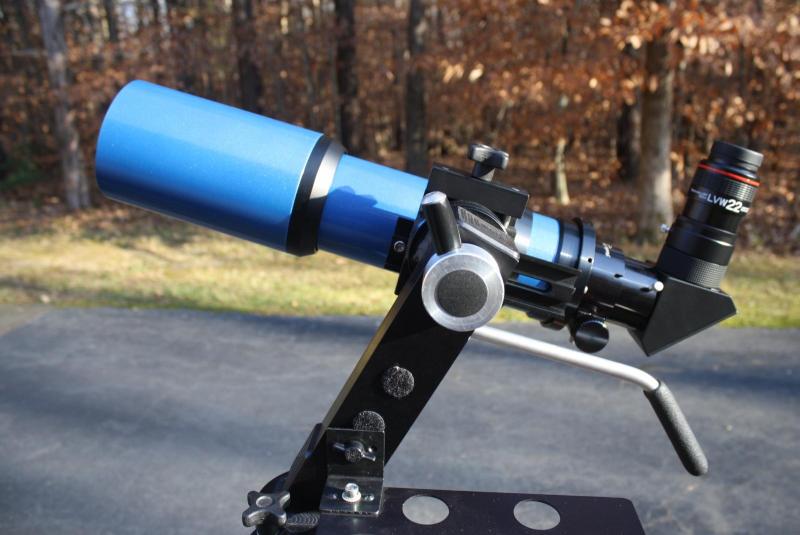 The scope isn’t actually that pale, and is about the same shade of blue as the SV115 in the picture a few posts above.  And both scopes are much prettier in person.

Congrats Scott - I have an APM version of the same (115) scope, riding on an FTX. They have very fine optics indeed.

I got the opportunity to take both the SV115 and TEC 140 out for comparison testing tonight.  The verdict (as expected) is that both have as nearly perfect optics as one could expect a high-end apo triplet to have.  To my eyes the star tests of both appear perfect, without a hint of chromatic aberration either in or out of focus.  The 140, as expected, gives slightly brighter views when viewing DSOs, with maybe just a tad more resolution when viewing the dark surface markings on Mars.  The 115 is a little lighter (not by much, though), and rides just fine on my Unistar mount and UA wooden surveyor’s tripod, while the 140 really needs the heavier DM6 and Berlebach Planet tripod.

Both scopes are fantastic, and no sensible person really needs to own both scopes simultaneously.  But since when did this hobby have to be a sensible one?  As crazy as it sounds, my plan is to keep both for a long time.  If I absolutely had to sell one or the other, that would be an incredibly difficult decision to have to make.  Of the two, I’d probably keep the TEC because of its greater aperture, but if I absolutely needed the money and had to sell the TEC, it certainly wouldn’t be *settling* to have to live with the SV.  Life is good.

I'm pretty sure I have said the exact same thing about every telescope I have ever sold.