The other day I found a Rose colored 90 etalon.   The views though it were better than my first Original 90.  Not sure the rose color is anything special but it looks different than a normal one.

Hmmm, that's a really interesting "find" Larry.  If it's an original Coroando (e.g. a IOM or David and Andy Lunt era model) then I'd say it's definitely a keeper.  I don't think they get much better than those...

Regarding blocking filters, I have found a suitable ITF replacement that has also resulted in superior image brightness, which is especially important for double stacking.  As some of you may know, in order to increase image brightness, I removed first one (two are redundant) and then the second RG630 ERF from my double stacked SM 90's and replaced them with a single Baader DERF 110, which helped significantly: 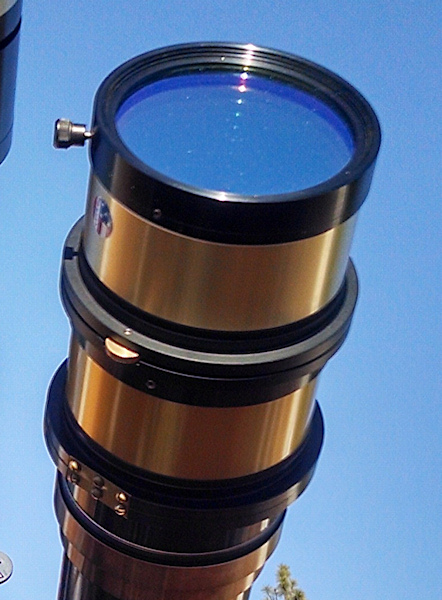 The DERF is specifically made with enhanced IR/UV blocking coatings on a precision BK7 optical substrate of 1/10 wave flatness, which helps to reduce and prevent ITF failure.  But still desiring more image brightness, I took a chance and bought a secondhand BF30.  While it indeed had improved transmission, its ITF also definitely had started to deteriorate as seen on the right: 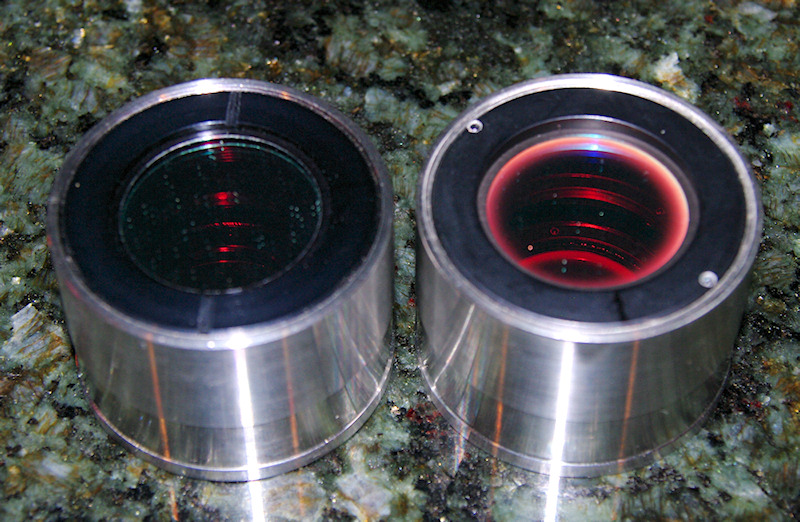 Note that both ITFs are made with an RG630 substrate.

So now I set upon trying to find a suitable ITF replacement that was more robust than an ITF.  I know that Solarscope uses KG3 filters instead of an ITF.  I found that Oliver Smie of Beloptik in Germany http://beloptik.de/en/top/welcome/  sells a very similar KG3 filter with additional UV/IR blocking http://beloptik.de/e...locking-filter/  which appears to have IR blocking equal or superior to an ITF.  It is available in 1.25 and 2 inch versions.  Even better, for a modest fee Oliver turned down the 2 " KG3 UV/IR filter to 34 mm so it would be a direct drop-in replacement for the rusted ITF - an advantage so that the tilted filter cell could be used. 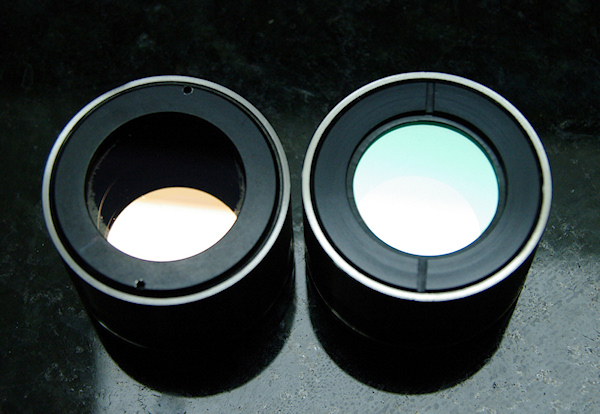 The results were horrible - essentially a continuum view, and insanely bright: 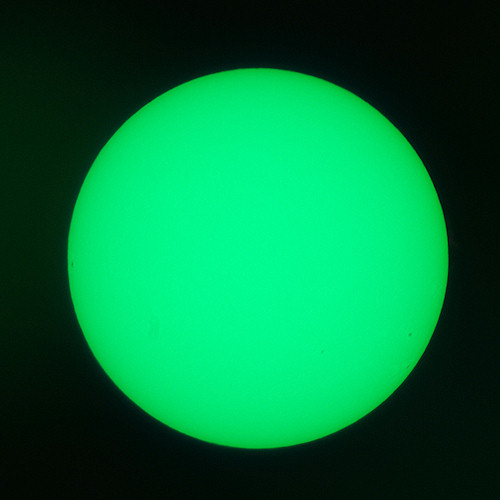 I contacted Oliver, who reminded me that the KG3 UV/IR filter needs to be used in conjunction with a RG630 filter in order to work properly - he also sells his own ERF for this purpose http://beloptik.de/e...jection-filter/  (Lunt also supplies a similar RG630 ERF with IR blocking  http://luntsolarsyst...ection-filters/ ).  He also suggested a Baader 35 nm H alpha filter, which is supplied on a RG610 substrate, or a straight up RG630 filter, which would be better.  I just so happen to have my 2 original SM90 ERFs, so I re-installed one of them in the DS SM90.  The results are fantastic.  I have nearly double the transmission through this combination than I have with the original BF30 and the DERF alone: 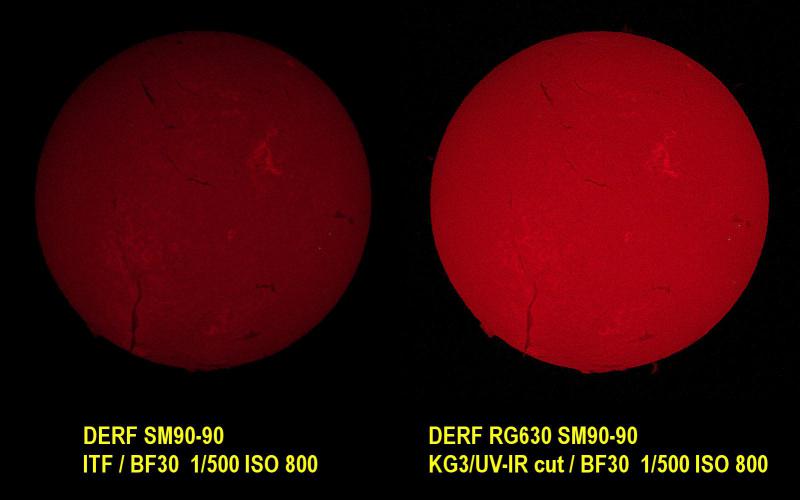 The versatility of the new system mimics what Solarscope provides with a 2 blocking filter solution.  For single stack use I use the DERF with the primary etalon sans RG630 ERF, as the original BF30 has this component.  The image brightness is "just right" as Goldilocks would say.  For double stacked use, I add the secondary SM90 with the re-installed RG630 ERF - while still using the DERF as the first element to prevent any etalon heating - and the KG3/BF30 sans RG630 provides a bright crisp image, and has cut my imaging exposures in half!

As a new owner of a solar scope (LS60THaDS50/ B1200CPT), i'm thinking :
what are the recommendations / best practices for preventing deterioration issues
("rust") on our solar scope filters : Ethalon, ITF, Block filter...) ?

This will of course depend on the design & materials used in the specific scope,
- and for obvious reasons I'm esp. interested in Lunt filters - but informations on
"life expectancy" and "proper maintenance" of all types of solar filters would
be of interest.

I've seen that Lunt issues a 5 year guarantee for defects (including faulty filters),
and advises storage of the solar scope in a protecting case with low humidity.
With "proper handling and care" (as Lunt writes), the ethalon should "last a lifetime".
-- I wish they had been more specific...

I've read recommendations such as :
* store the scope in its case with a bag of dessicant
* mount a UV/IR-cut filter in front of the ITF (on the Lunt diagonal)

So how do you proceed in protection/prevention of faulting filters on your solar scope,
and what are your experiences of "life expectancy" for your solar scope components ?

The important thing to remember is that there are many filter components in an narrow band solar filter system, with complex coatings which may be located in various places within the filter system or telescope.

The general principles are as you have noted - keeping harmful UV/IR away from sensitive components with pre-filters, and reducing exposure to humidity as much as possible.  A milligram of prevention is worth a kilogram of cure.

My original BF30 ITF failed twice in 3 years.  My CaK PST's ITF also failed, and can't be replaced.  So now I'm Mr. Overkill due to these repeated ITF failures in my Coronado filters, which were a considerable investment, so the measures I have taken are reasonable to me, but might not be to others:

Using the highest quality IR/UV blocking pre-filter in front of my telescope objective, and being fastidious about moisture prevention (as shown in the link above) has resulted in no sign of failure of any component in over 5 years.

My understanding is that Lunt no longer uses an ITF for mid to long wave IR blocking, and they may use a KG or BG filter w AR coatings instead.

My CaK PST's ITF also failed, and can't be replaced.

So did mine, AR coated KG3 from Thorlabs is what I use now along with a Baader K-line.

Thanks for that Mark!  Going to have to find someone to make a bunch of 1.25 inch filter holder wedge-rings to keep the reflections minimized in CaK...

Yikes! I hope you won't be using the proposed filter combination visually Bob.

No -- absolutely not!  I only do CaK imaging, no visual as I can't see that wavelength worth a darn to begin with.  Moreover, the UV part of the spectrum is nothing to fool around with visually anyway, and that is what 394 nm is to begin with - so only imaging for me.

Thanks for the reminder.

I've just finagled my way into obtaining one of my dreams, the "Holy Grail" Coronado SM140 with an internal SM90 double-stacking module.

Only six (6) SM140's - the largest commercial H alpha filters - were made by Coronado Tucson -- three by Andy Lunt and three by Brian Stephens (both now with Lunt Solar of course), and only two were equipped with double stacking modules.  One (allegedly with an internal SM60 module) is used at the Vatican Observatory in Rome, and the other was presented at HOTS (Hands On The Sun) in Tucson late in 2005 using the SM90 internal module installed in a TAK FS 152, where I was able to view through it first-hand, and the image was pretty darn awesome.  I will be putting this system together hopefully soon with a more than adequate 150 f8 achromat. 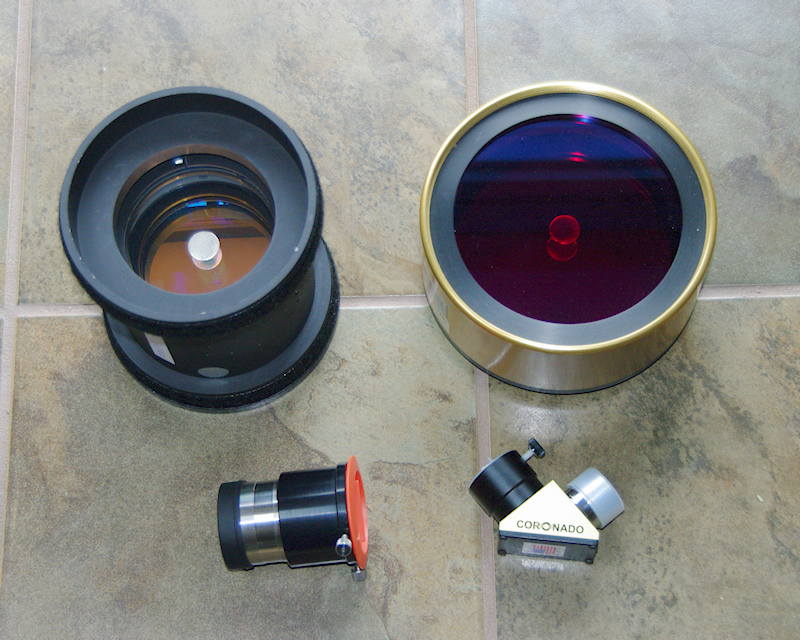 Interestingly, the diagonal mirror has a gold-colored reflective coating, which I will be looking into further: 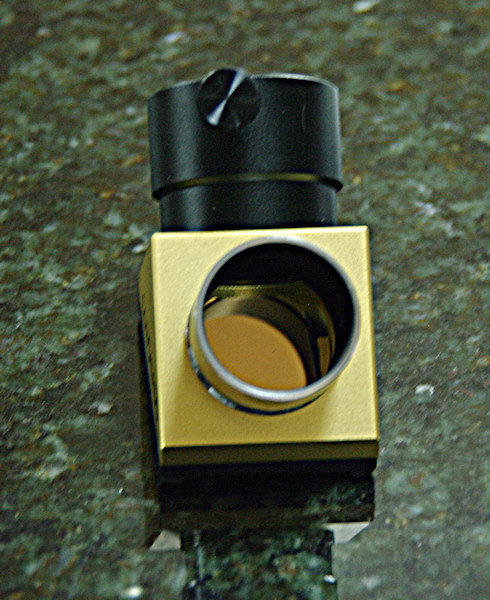 Here's what the system looks like with the T-Max tuner for the SM140.  I'm thinking I will motorize it verses the long rod - but we will see: 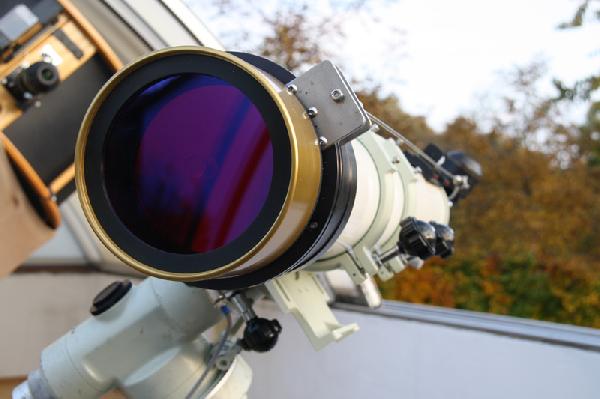 I have a catalog circa 1964 that has that filter in it.  Attached below is one page.  Pretty advanced for it time.

And <qupte>An interesting white light filter from the 1960's or early 70's (can't remember now ;-) was the Criterion S4, which used a mirrored barlow lens and internal dark welders glass filter to dim the sun to a safe viewing level:</quote>

Are these the solar eyepieces that we are advised to destroy because they are so dangerous?  I've never seen one.

Like Larry Alvarez I have a rose colored Solarmax 90 etalon type 1, but I think it's a Meade production, not pre-Meade (Coronado - Meade is mentioned in the doc). 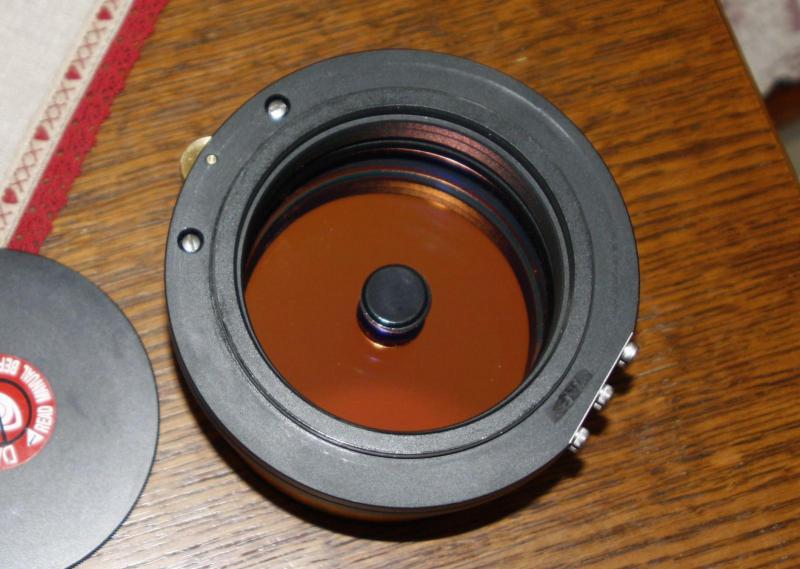 Bob or anyone, do you know why Meade produced both yellow and rose etalons and what the rose is made of ?

Man o'man that's the rarest of the rare!  I think it found its way to the right person though.  Thats one sweet setup.

Here's what the system looks like with the T-Max tuner for the SM140.  I'm thinking I will motorize it verses the long rod - but we will see:

This is a picture of the rusted Coronado PST ITF before replacement, showing a marble-like effect in the coatings. I went through 2 of the original Coronado PST ITF's, when I opted to purchase a Meier Photonics ITF, which appears to resist rust much better than the two original ITF's.

This is a picture of the rusted Coronado PST ITF before replacement, showing a marble-like effect in the coatings. I went through 2 of the original Coronado PST ITF's, when I opted to purchase a Meier Photonics ITF, which appears to resist rust much better than the two original ITF's.

My Coronado PST ITF is rusty, I am looking for "Meier Photonics ITF", can it be used for visual observation, is there a risk of solar ultraviolet or infrared? I am now looking for an alternative that can be observed with the naked eye.

The company is Maiers Photonics  http://maierphotonic...assfilters.aspx

Interestingly, the diagonal mirror has a gold-colored reflective coating, which I will be looking into further:

What have you found out?

The pentaprism of the PST has a similar color