Tony Hallas on Using a DSLR

Shawnhar posted an interesting Youtube video - in Beginning and Intermediate Imaging - from Tony Hallas describing his method of processing using A DSLR. Its very different from what you usually see posted. In case you are interested its here:  http://www.cloudynig...n-using-a-dslr/

He has a lot of really good information in there.  He's right about how to clean up DSLR images.  Dithering aggressively is the only way to fly....

Nice presentation.  Thanks for the heads up.

I like the presentation and the results one can achieve. Tony uses Registar, instead of DSS or other such software. Unfortunately, Registar is $150. Is there a good reason to spend that much on a "stacking" program? I am at a loss to understand the greater value.

Registrar will also register multiple images. It's really good at that. However, $150 is a bit steep. Why not go a little further in price and have a full suite of tools within PixInsight. Tony likely used Registar in the talk simply because that just what he uses. The technique is available elsewhere and you do not need Registar.

Thanks for the suggestion, Jerry. My level of astrophotography at this point is way below the quality that PixInsight would treat appropriately. Maybe in time I'll get to the expert level. lol

I was also surprised at how different his methods are to what you typically see.

I'd completely disagree with his points on calibration frames and even some other aspects, if his results didn't speak for themselves.

Totally agree with his thoughts on color mottle.  I too mistakenly thought it was hot pixels, but it cannot be since as he points out the color mottle is 5-10 pixels in size, or even bigger.

Here an example from a stack of 3 images with no dithering (Canon 450D).  On the left is without noise reduction, on the right after Noel Carboni's actions (noise reduction and less crunchy).

I certainly agree with his points on dithering. I started to do dithering awhile ago and even dropped darks as I noticed they added no value when I was dithering. However, I never got rid of the mottling effect with as little as 9 frames the way he can. Also, I have never heard it suggested to drop the other calibration frames - flats and bias. Also, actually modifying the subs before stacking was supposed to be wrong as well. I will see if there is any way to increase my dithering and play with his other suggestions. As they say - "whatever works".

I'm sure Tony has some pretty clean optics and sensor to get away without shooting flats. My flats do a lot more than just help vignetting, such as dust modes, optical flaws and other imperfections from my self mod hack job. As for darks and bias, I'm gonna stick with those as im still manually dithering every 4-6 frames, which may not be enough. I did find it interesting that he applies noise reduction to the raw files before stacking, although that may be how he gets away without calibration frames.

Your comment made me realize that my previous one was wrong.  I think the color blotches are actually dark (thermal) signal.  Theoretically, this signal should be subtracted through dark calibration.  I think one of the issues in the photo I linked above is that the darks were not properly calibrated to the temperature of the lights (there was a break between my imaging session and darks).  That being said it's hard to perfectly match the temperature.

Here's the stretched dark signal in a 3-minute exposure image, it looks like the color mottle (10 pixel block for comparison):

If you want to know how much you are dithering this may help. I believe PHD2 has 5 levels of aggressiveness. They are  +/- 0.5, 1.0, 2.0, 3.0, 5.0 pixels. However, these are guide camera pixels and PHD2 will multiply them by the the dither scale factor - as indicated on the Global tab in the brain. So, although I'm not familiar with BYEOS, I assume it will have 5 levels of dither ( as does SGP) which represent the five levels in PHD2. So, if you chose the maximum dither or highest amount in any program using PHD2 you should be getting 5 x (the dither scale factor) equals the total number of pixels dithered.

If you are going to use maximum dither aggressiveness in BackyardEOS, as you have in your image set to 5, you better increase the calm down period.  You have set at 2, that is way way to low for maximum aggressiveness.  The default is 10 seconds when aggressiveness is set to 2.  If you set it to 5 you need at least 30 seconds IMO... otherwise you risk your next image to start before PHD as resumed stable guiding again.

Lets not go nuts here and push dithering to the max... go slowly and inspect your result.  Most people will guide at shorter focal length so a single pixel of dithering on the guide camera will be more pronounced on your imaging camera.

Interesting stuff for sure, so I decided to give the process a shot. The major difference being that I'm using DSS for stacking.  I learned pretty quick that these pre-processed subs don't get along well with sigma clipping, so I tried to combine with "average" with better results.

I was pleasantly surprised with some clean results on the Eastern Veil.

But then I got into some data for M31  (25 subs @ 600s) and have had some major issues with this ACR (Adobe Camera Raw) method of pre-processing.  In short, the resulting stack has had major gradient issues.  After effectively dealing with them (I'm using PhotoShopCC wtih my main approach being Carboni's Actions for gradients) there are still some artifacts that I can't quite explain.

Here's a 200% crop of the background which shows the issue. 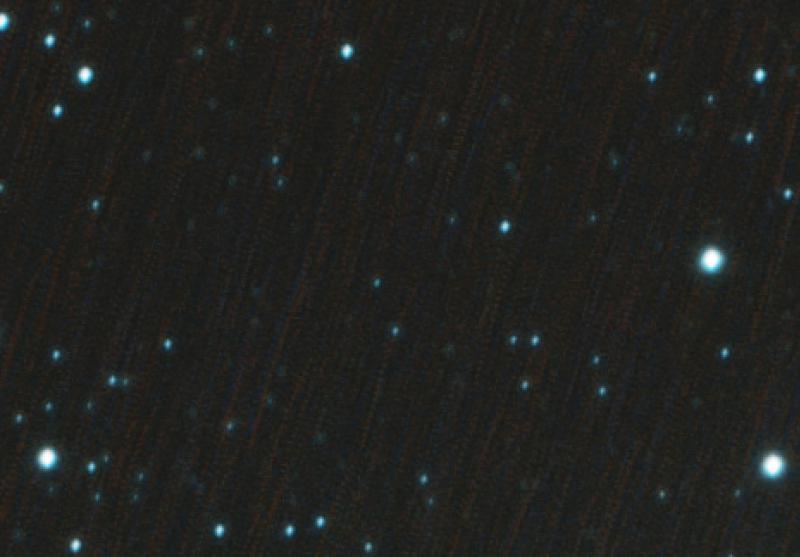 Possibly a product of my dithering?  I only had PHD2 set to a dither scale of 1.

If I had to guess, your dithering is not working. That looks like the "walking noise" I had before dithering, the diagonal red streaks. Once I started dithering and using Sigma in DSS, it completely went away. Your red dots don't seem to match that though, it looks like 35 or so individual dots. Very weird

Makes sense Shawn.  There's always the chance I had managed not to toggle dithering via BYEOS for that run.  And if I had turned on dithering for the Veil run, that would explain the difference in results.

This is a bit of a cross post from Reddit, but I feel it's important enough to repeat here;

This is a downright dangerous video/presentation, which will put a lot of people on a dead-end track. He is doing a lot of budding astrophotographers a great disservice here.

This is going to be a bit of an essay, but bear with me. And please do understand I do not mean to slag anyone off, but it really needs to be said that there are a great number of issues with the material in this presentation.

TL;DR: He is advocating some very, very nonsensical and destructive things. This video makes me very, very sad....

TL;DR: He is advocating some very, very nonsensical and destructive things. This video makes me very, very sad

On his own website you can order several DVD's about astronomical image processing made by himself...

Well, I am confused now.

So is the consensus that Drizzle works but what Tony recommends post that can be more effectively controlled simply by the standard DSS stacking process without the pre-precessing need?

IVO!!!! I did not know about Bayer Drizzle, you are awesome.

It would be wise to follow Ivo's advice on this! Thanks for posting Ivo.

Anyone with access to Astronomy magazine can check back issues from fall of 2013 where Tony Hallas describes this process in several of his columns.

Wow, thanks Ivo for taking the time to post this. It will certainly save me trying this stuff. Your advice makes complete sense. Other than dithering - which I do anyway - I will not try what Tony suggests.

Dithering is only effective to reduce fixed pattern noise; his color mottle is simply the result of transformed (by the debayering) random shot noise; the 'Color Mottle' is never in the same place, so dithering isn't required to fix that. Tony's solution to use dithering is just a very roundabout way of fixing up his initial error of debayering his frames with Adobe Camera RAW. It's really a less effective way of applying Bayer Drizzle (scroll down the full page) of the RAW frames. The latter procedure doesn't introduce the mottling in the first place.

I don't know if it's entirely accurate though to say that color mottle isn't in the same place.  As I understand it, color mottle is largely the result of dark thermal signal, which is a property of the sensor.  Sure, additional color mottle can be created by debayering prior to stacking, but most people avoid this.

Essentially, Tony was right to advocate for dithering, but it was overblown in his examples because of the debayering problem that he introduced in his workflow (using Adobe Camera RAW).  Dithering is still very useful in getting rid of color mottle regardless.