133 replies to this topic

Panning down south now, to the region S of the Montes Carpatus part of the Imbrium Basin rim. In the upper part of the field of view is the trough beyond the Imbrium excavation boundary, which further south gradually transits into the E part of the Procellarum Basin.

There are some rough highland plains in this field, which were thought to be of volcanic origin, but Apollo 14 rock samples (impact shocked breccias) from the plains north of Fra Mauro revealed these to be pre-Imbrian crust covered by a blanket of debris and melt ejected by the Imbrium Basin impact.

The area has been extensively flooded in the upper Imbrian and later Eratosthenian lava flows, embaying the highland plains and leaving only traces of ancient pre-Nectarian (Fra Mauro, Bonpland, Euclides P) and Nectarian (Gambart, Reinhold B, Parry) craters. Some of the lava puddles have received separate names: Aestuum, Insularum, Cognitum, Nubium, -- but at least Aestuum and Insularum are probably not separate impact basins, but rather flooded low-lying regions created by other impacts.

The upwelling magma has fractured the floor in some craters (Encke), and was accompanied both by explosive fire fountain volcanism creating large patches of dark pyroclastic deposits (Aestuum, Insularum), and also by more quiet eruptions leaving shield domes with summit pits such as the π Milichius dome, the Hortensius domes and several others.

The recent large Copernicus impact of course dominates the view, with its central peaks, hummocky floor and bright terraced walls surrounded by a ring of impact melt and a far-flung web of crushed highland rock stretched out in bright rays across the dark mare lava of Insularum, E Procellarum and Cognitum. The landing site of Apollo 12 was selected to be right on top of one such Copernicus ray, in the hope of sampling both old pre-Nectarian bedrock material and younger mare lava. The sampled mare basalt was indeed younger than the Apollo 11 Tranquility Base mare by ~0.5 Byr (borderline Eratosthenian/Imbrian: 2.3 Byr) and the Copernicus ray material was ~0.8 Byr, which provided a good dating of the Copernicus impact. 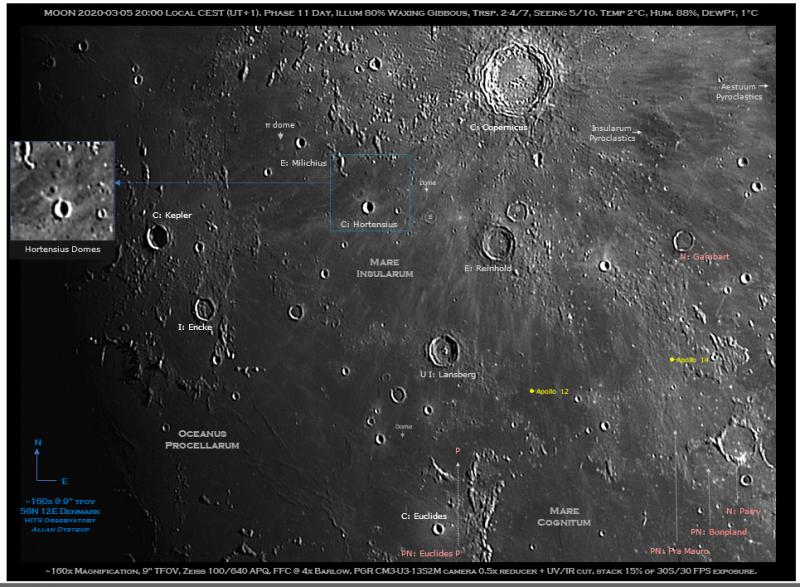 Moving further south along the 11-day terminator, I now place the Humorum Basin towards the SW, with the Nubium region up NE; Nubium may be an ancient pre-Nectarian basin, but if so, it is far from well defined (the scarp/ridge Rupes Mercator could be what’s left of the SW excavation rim?).

The whole area has been lava flooded in the upper Imbrian and Eratosthenian epochs, with the basalt in the Humorum Basin forming a deep mare showing an inner wrinkle ridge ring plus a clear excavation rim, complete with subsidence scarps (Liebig), arcuate rilles (Hippalus) and floor fractured craters at the shores (Gassendi, Vitello).

In contrast the Nubium region only has a shallow lava covering, with the (sometimes only partial) rims of many Nectarian craters still protruding (Opelt, Gould, Lubiniezky, Agatharchides, Wolf, Pitatus, Hesiodus...). The Rimae along the inner wall of Pitatus were probably created by magma intrusion that flooded and uplifted the crater floor at the shore of Nubium. A few mare stretch-marks can be seen in the Nubium area (Rimae Hesiodus, Agatharchides), and also some volcanic formations, most prominent the Agatharchides Megadome (“The Helmet”), the φ dome at Kies crater and the dome located inside the lava flooded crater Capuanus.

Bullialdus is a striking (sic) early Eratosthenian impact in the new-formed shallow mare surface of S Nubium; It is surrounded by a ring of impact melt and an ejecta carpet rich in mare basalt (any light rays of deeper bedrock anorthosite have faded by now). 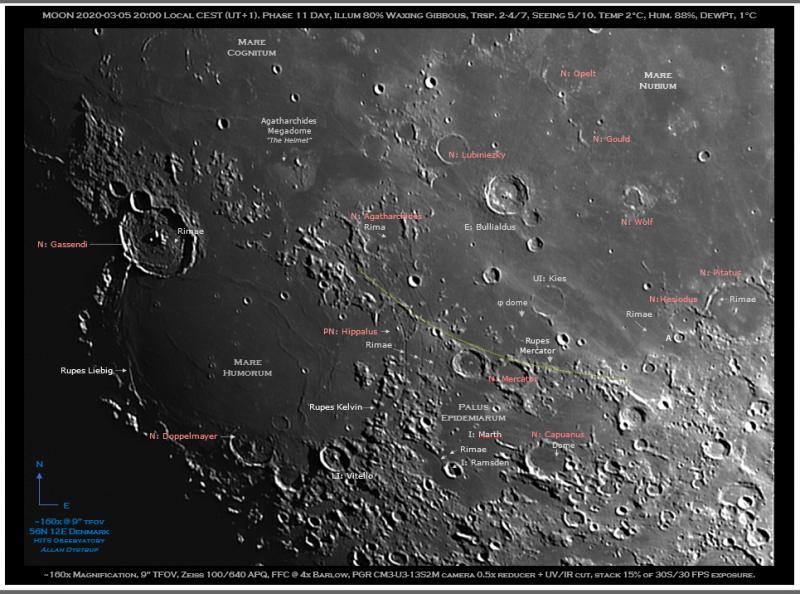 PS: And oh yes, there's also that Epidemic Swamp (Palus Epidemiarum) south of Nubium. Takes on a rather new meaning in these COVID-19 days. Take care and stay safe!

Ending my sweep along the 11-day lunar terminator, I arrive once more at the Southern Cratered Highlands, now with the large crater “diamond” of Tycho-Longomontanus-Maginus-Clavius well lit up at the center, and the “unusual” pair of craters Hainzel-Schiller towards the terminator at the W. I’ve described these mostly old (pre-)Nectarian craters before, so tonight I'll focus on the area around the S. Pole.

The far South Polar Region is also dominated by old Pre-Imbrian impacts: from Bettinus and Kircher towards the SW all along the lunar rim to Scott and Amundsen at the SE. There are two relatively young craters in the south cratered highlands: Copernican Tyco and Eratosthenian Moretus, and if you draw a line through the centers of these craters and extend it to the lunar limb, you arrive at the ancient pre-Nectarian crater Malapert.

The latitudinal libration tonight is -1°, so not really favorable for zooming in on the exact location of the S. Pole, -- but I can see the Malapert Mountain ridge between Malapert and Shoemaker to the S. This ridge rises to a height of 5 km with the peak at ~0° longitude, having the N side always in sunlight while the S side facing Shackleton crater at the S. Pole is in perpetual darkness. Mt. Malapert has been proposed as the target site for a lunar expedition to the S. Pole, with the near side providing continuous solar power and radio communication,  while the far side can provide  possible water resources, and would also be ideal for radio astronomy, shielded from Earths radio noise. 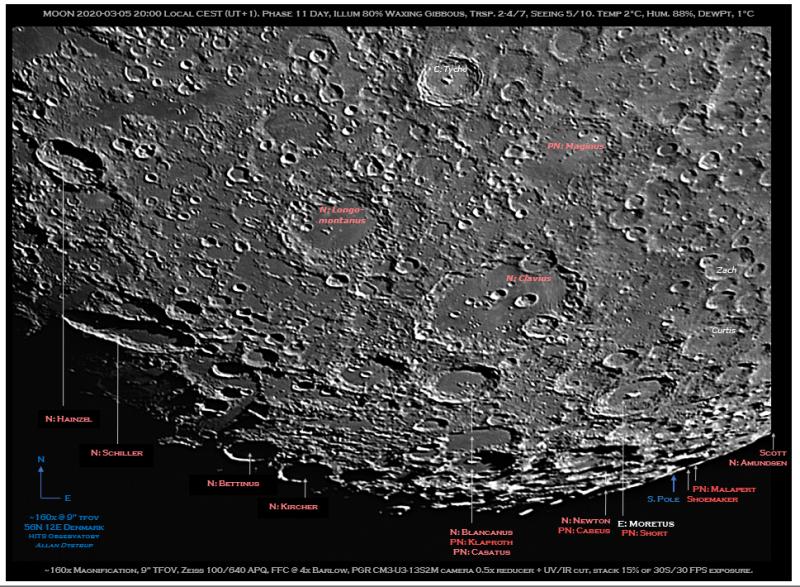 I’ve swept down the lunar terminator at medium magnification several times during the past months, so now I consider the Moon well covered in overview mode, -- apart from the Orientale Basin area at the far western rim and also the lunar mare lava types (which I plan to study as soon as possible). In the meantime, I’d like to zoom in at higher magnification on some selected lunar terrain features that I find especially interesting.

First I'll focus on the area around Endymium crater, which I observed on March 27. 2020 in nautical dusk, when the Moon was at up at 19° altitude in Aries towards the W. Both seeing and transparency were just above medium, although the transparency suffered a bit towards the horizon from high atmospheric humidity. The observation was made using my 4” f/6.4 refractor with an FFC @ 4x barlow and my CM3 video camera for ~200x mag. live video: 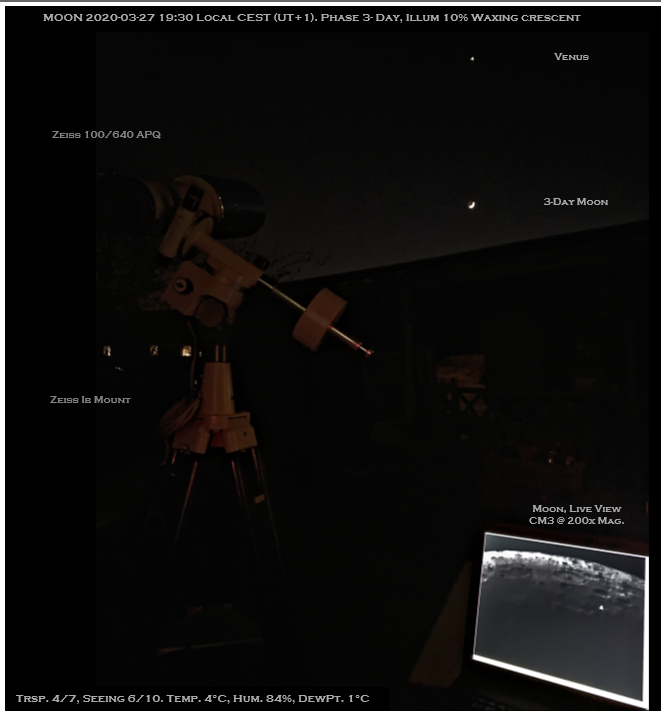 Endymion is a relatively old pre-Imbrian impact that smacked into the S wall of an ancient (unnamed) pre-Nectarian crater, still “sticking out” up north and bordering on another PN crater: De La Rue. The floor of Endymion was lava covered in upper Imbrium, and to the S of Endymion is seen a pair of ancient (unnamed) PN-impacts that has been almost totally flooded by mare lava in the same epoch: Lacus Temporis.

Beyond Endymion towards the E is seen: first the outer excavation boundary of the Nectarian epoch Humboldtianum Basin, then further E is the inner basin ring that holds the Mare Humboldtianum. The libration this evening is not favorable for the E lunar rim (-5° Long), but never the less the inner ring can be traced all around the mare lava to the far eastern side, right at the lunar horizon. The Humboldtianum rings have been named (informally, by Chuck Wood) as: outer 650 Km Ø Andes Mts. and inner 340 Km Ø Bishop Mts.

I made a couple of transects: T1 across the Humboldtianum Basin and T2: across the Endymion crater complex. In general, this is a low lying area with the Mare Humboldtianum at level -4 Km, rising to -3 Km between the inner and outer ring, and then up to around -1 Km average height for the Basin ejecta carpet outside the Mts. Alpes scarp, where Endymion is located. The ancient Endymion floor is at -1.8 Km while the younger Endymion lava-covered floor is at -3 Km.

The area offers quite a dramatic view in the telescope at this only 3-day young crescent moon! 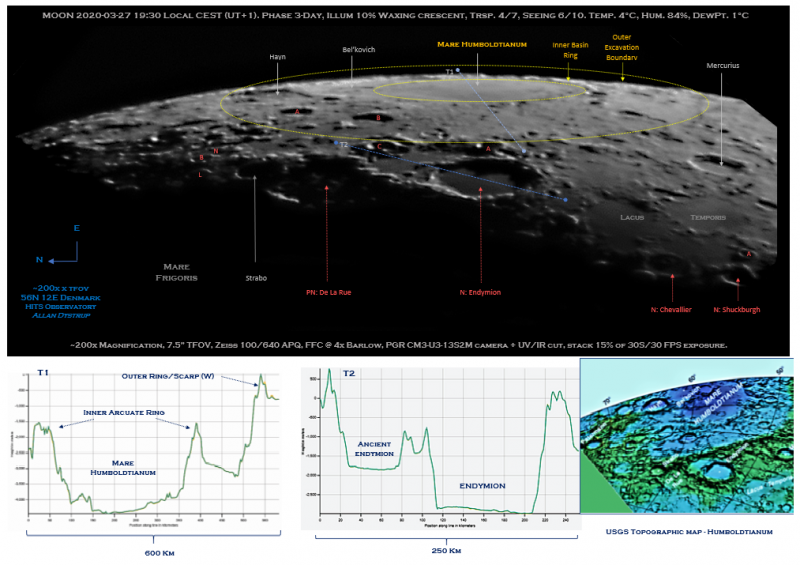 I have a couple of other close-up observations of the 3-Day crescent Moon that I’d like to share here: the Crisium Basin and the Petavius crater. One disclaimer though: the high-mag views on the evening 2020 March 27 were quite soft, for several reasons: it was dusk (civil bordering on nautical), the moon was low at 19° altitude, there was a light haze towards the horizon, the seeing was below medium, and alas my polar align and focusing were both not optimal... That said, without further excuses

The relatively young (Nectarian) Crisium Basin shows a massive rim of up-tilted crust, -- most well defined towards the W. This indicates an oblique impact in a W->E direction, which has ejected excavated material as a hummocky carpet, preferentially fanning out towards the E.

A transect of Crisium shows the W basin rim to be significantly higher (4-5 Km) than the E rim (~1 Km), with a shelf covered by shallow mare basalt just inside the rim. The shelf is delimited by an inner ring of wrinkle ridges (dorsae), inside which the thick central mare has subsided by ~500m. Several craters on the higher bench have been only partly flooded by lava (Lick, Yerkes, Eimmart C), while any lower-Imbrian craters on the central basin floor have been fully submerged by the ~3 Km thick lava cover. 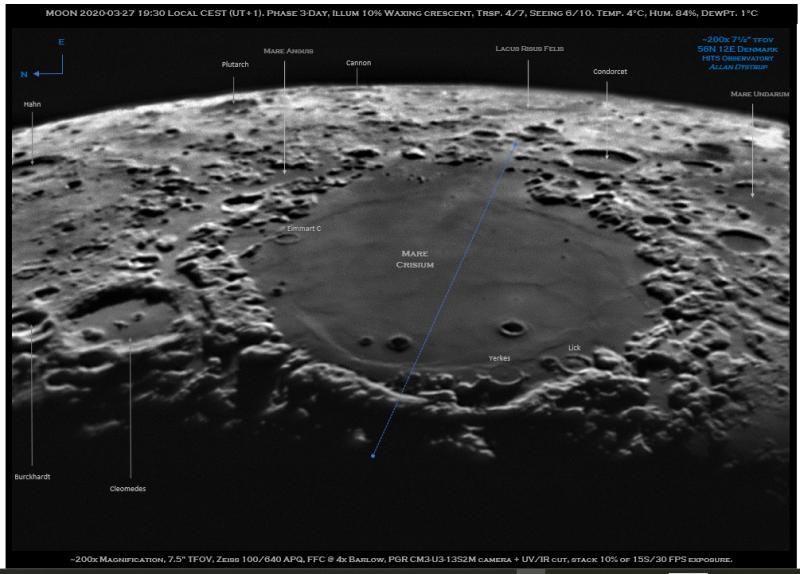 Petavius is an interesting large, uplifted and floor-fractured crater (FFC) with a major straight and wide crack from the central massifs to the SW rim (Rima Petavius), plus volcanic pyroclastic dark matter deposits (DMD) at the N end of the crater floor.

Petavius shows a tight central ring of mountain massifs plus an unusually wide crater rim (50-100KM at the top), almost as an early stage of becoming a double-ringed impact. On the transect I made (see below) it is also evident that the crater floor is domed up with the rille probably being a tension fracture (i.e. a trench/graben). 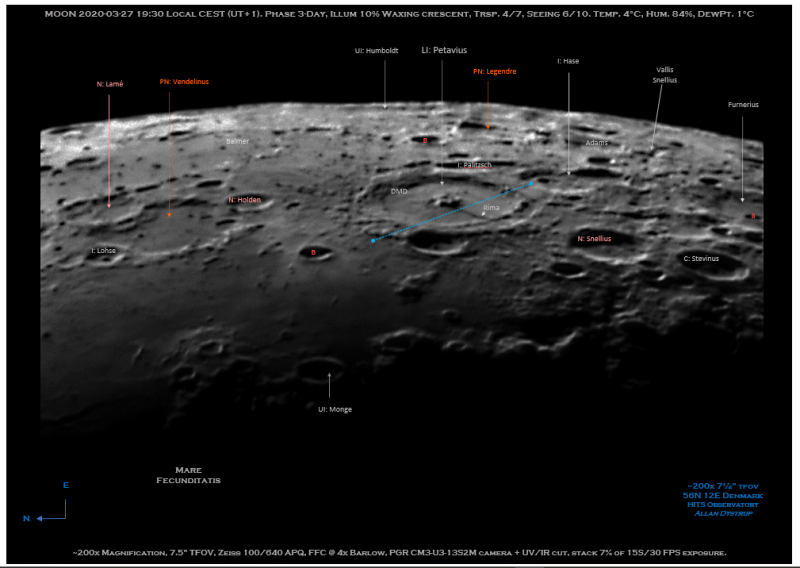 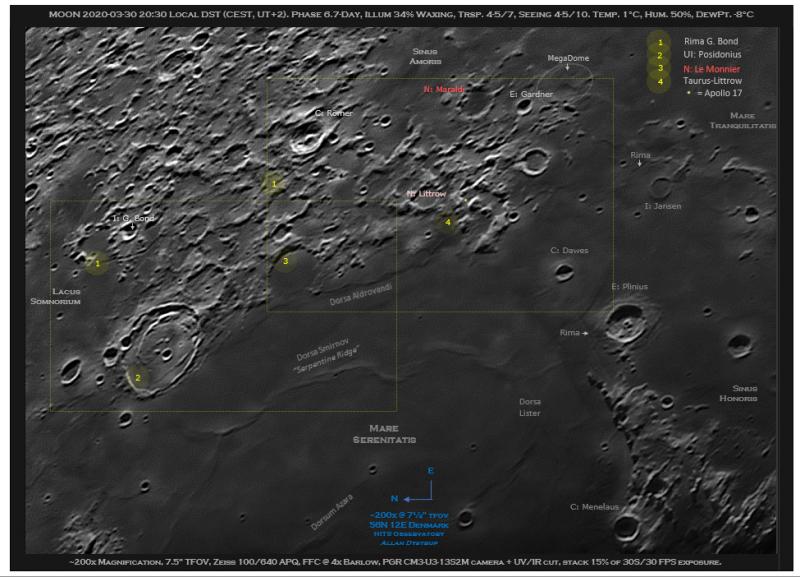 Taurus-Littrow was chosen as the final landing site for the Apollo project (A17) in an attempt to bracket the lunar time scale by sampling and dating both ancient lunar terra (uplifted Serenitatis basin floor in N. Massif?) and young eruptive volcanism (dark mantle deposits on TL Valley floor?).

As it turned out, A17 succeeded in collecting 4.1 Byr crystalline material from old uplifted Serenitatis basin crust, but most of their “terra” samples from N. Massif and Sculptured Hills were complex, severely deformed and extensively melted multicomponent breccia ejecta from the Serenitatis (3.86 Byr) and later Imbrium (3.84 Byr) impacts. The DMD on the TLV floor turned out to be not so young 3.64 Byr pyroclastic material mixed up in the regolith and mostly exposed by excavation of lunar cratering. Below the regolith in the TLV was found a 1.4 Km thick and 3.7 Byr old dark titanium-rich lava layer; This dark lava is also seen along the shore of Mare Serenitatis, whereas it has been overlaid at the center of the mare by a younger and brighter lava flooding. At the foot of the S. Massif is seen a landslide wedge of bright material which was also sampled by A17; This is thought be ejecta from the Tycho impact, which was thus dated to the Copernican age of only 109 Myr. 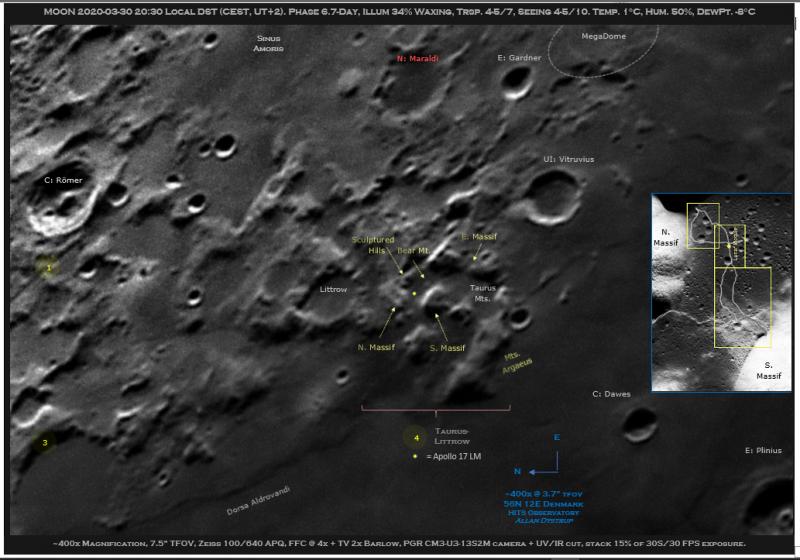 So many exciting results, so much yet to be learned... As Don E. Wilhelms writes: “By the time of Apollo 17 a magnificent and sophisticated network of rocketry, flight operations, geological and geophysical support, and geologic laboratory analysis was functioning with smooth precision. Now it was time to shut it all down and turn out the lights. Let each of us reflect once again on the marvel of it. It could not be done today.” So true, so sad...


Also tagged with one or more of these keywords: beginner, classic, moon, refractor