Started by Aquarellia , Dec 14 2014 02:38 PM
This topic has been archived. This means that you cannot reply to this topic.
17 replies to this topic

That's maybe because I like to use this great telescope, or it's because I like challenges but,... it's certainly not the best optical combination for this observation.
On 11 December, I finally found a corner of pure sky above the 24-inch reflector made by Olivier Planchon. To observe Uranus, the speed is definitely too high: f / 3.3 d, so we had to use very short focal EP to reach the useful magnification (Nagler 3.7 and 2.5) !.
If you look at my watercolor you can see a somewhat elongated comet hair that diffuse around the planet, that's exactly how we see the planet area in the field, this is probably linked to a not 100% perfect collimation, but still. I get the impression that these big collimating tubes, it is not a piece of cake. 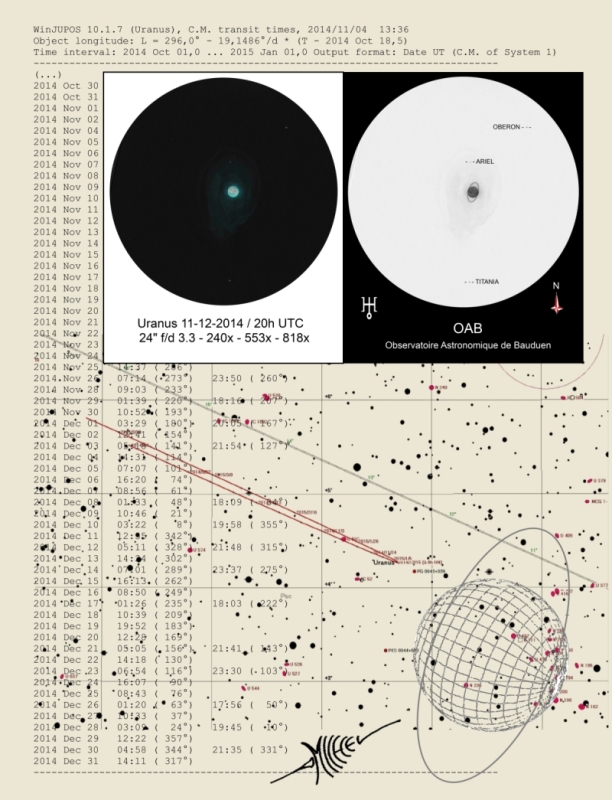 To do this watercolor I sketch some images on site and completed while in the workshop using inversion technique to obtain the desired color.  At the end I made the composition.

However, we can say two things:
1- We observed three satellites of Uranus, Oberon, Titania and Ariel, this last one being a bit lost in the lights of the planet
2- the disk of the planet was not uniform as seen in a small telescope or some images. It's very difficult to confirm, but a diffuse zone clearer was observed in the upper atmosphere of Uranus, is that an artifact, I do not know? Anyway the main direction of the light area is perpendicular to the direction of the cloud bands of Uranus.
After watching the transit timetable of the storm raging there for the moment, the clouds was planned to be on the meridian 7h30 before or 9h00 after our observation. Is this a large drift, our vivid imagination, the effect of collimation? or an artefact?

I'm waiting for your remarks.

Interresting report for a 1st trial.

My last obs on the subject was the 06th of december with the 254mm Cassegrain.

I was going last year to the 500mm of the astro club near my home.

I would say the scope was not a top one but in spite of this the main feature that appeared was the bright collar around the cap, dark cap and the entire rest of the disk greyish. It was with a low magnification with regards to the 500mm (2mm exit pupill diameter). Higher magnifications was unpracticable.

That's very important to settle the right magnification level because the optimum for a given scope is on a narrow range.

This is depending on the the personal equation of the observer also.

For me for a 200mm Cassegrain the 333-360x constitute my optimum, in a 150mm refractor (with light transmission into the scope better it is possible to hold 312-340x Under an excellent sky transparency). Less magnification light glare wash features, higher magnification diffraction makes images dimer and less tonic.

Keep in mind that contrast levels are very low and the figure scope seen on jupiter or mars has nothing to be considered in comparison with uranus and less with neptune.

I imagine your 600F3.3 has also wyne corrector lenses, are you sure that this is not limitating very low contrast features. May be not but should be considered.

Why not to start with a newtonian, without corrector of F5 or F6 of 250-300mm with around 400x. Images Under level of 7/10 are difficult for monitoring low contrasted tiny sized features.

If you are researching the spots, hum... too straight. 1st the general pattern of the planet would be monitored before collecting the spots.

Second, discard ephemeris hoping to catch spots at some times, this can influence you a lot.

Personnally i perform the Survey, sometimes we get singularities, that can be assimilated to spots, but this a great challenge because their contrast levels are on a lesser level usually than the general pattern of the planet.

The diameter is indeed important but affected more by seeing, the agitation frequencies being more sensitive in the bigger and probability to get holes in seeing of 2 and more seconds of time is decreasing too a lot.

Considérations but with practice you will find the optimum conditions for monitoring on a regular basis, may be not the 600mm.

From me the threeshold of feature perceptibility is 150mm, but I remember that on 2010 the equatorial zone (almost at the apparent equator) was collected in a 110mm apo with 308x, but the feature was conspiscious at the time.

Observe a lot, this will come, make quotation of the sky transparency and the seeing with danjon scaling, start with an intermediate aperture less sensitive. Sky transparency influences negatively the feature perception, seeing as well.

Publish what you get on the forums, this will be welcome indeed.

Very interesting report and sketch of Uranus with the 24-inch reflector.

Very impressive capture of Uranus and moons.
I like the way you did the final sketch.
Impressive work that looks to be much fun.
Thanks for posting here.

Thank you Stanislas-Jean, Frank, Neil and Tom for your kind appreciation.

..., discard ephemeris hoping to catch spots at some times, this can influence you a lot.

Personnally i perform the Survey, sometimes we get singularities, that can be assimilated to spots, but this a great challenge because their contrast levels are on a lesser level usually than the general pattern of the planet....

Indeed, I never sketch after looking at what I have to see in ephemerids, same for the satellites position, I prefer to sketch what I see and cross check the day after in my workshop what that can be.

Sketching this way, sometimes I have surprises.  I fully agree with you!

Thank you a lot for your help about this observation, I'll share this with friends.

An outstanding observation of Uranus and it's satellites using a 24-inch reflector. The variation in albedo that you report is probably true in nature. Thank you for sharing it with us all.

Agree with Carlos, features you saw are actual features: probably the clear band around the apparent equator (actual is around 27° from disk center South side).

We are waiting your next reports.

Very interesting observation. I never tried to see the moons by myself. May be my 12 inch dob shows Ariel, Oberaon and Titania. Worth trying.

Thank you all for your nice comments. Much appreciated!

Very interesting observation. I never tried to see the moons by myself. May be my 12 inch dob shows Ariel, Oberaon and Titania. Worth trying.

As written by Stanislas-Jean that could be possible.  I'm just waiting for very good conditions.

Your a good observer Jef

Very impressive observation and water color.  You recorded a lot of detail.

Do you get to use the scope often?

Very impressive observation and water color.  You recorded a lot of detail.

Do you get to use the scope often?

Hi Eric, thank you for your appreciation.  Indeed I use this reflector quite often, I help to do public animation during the summer and for sketching for myself from time to time.